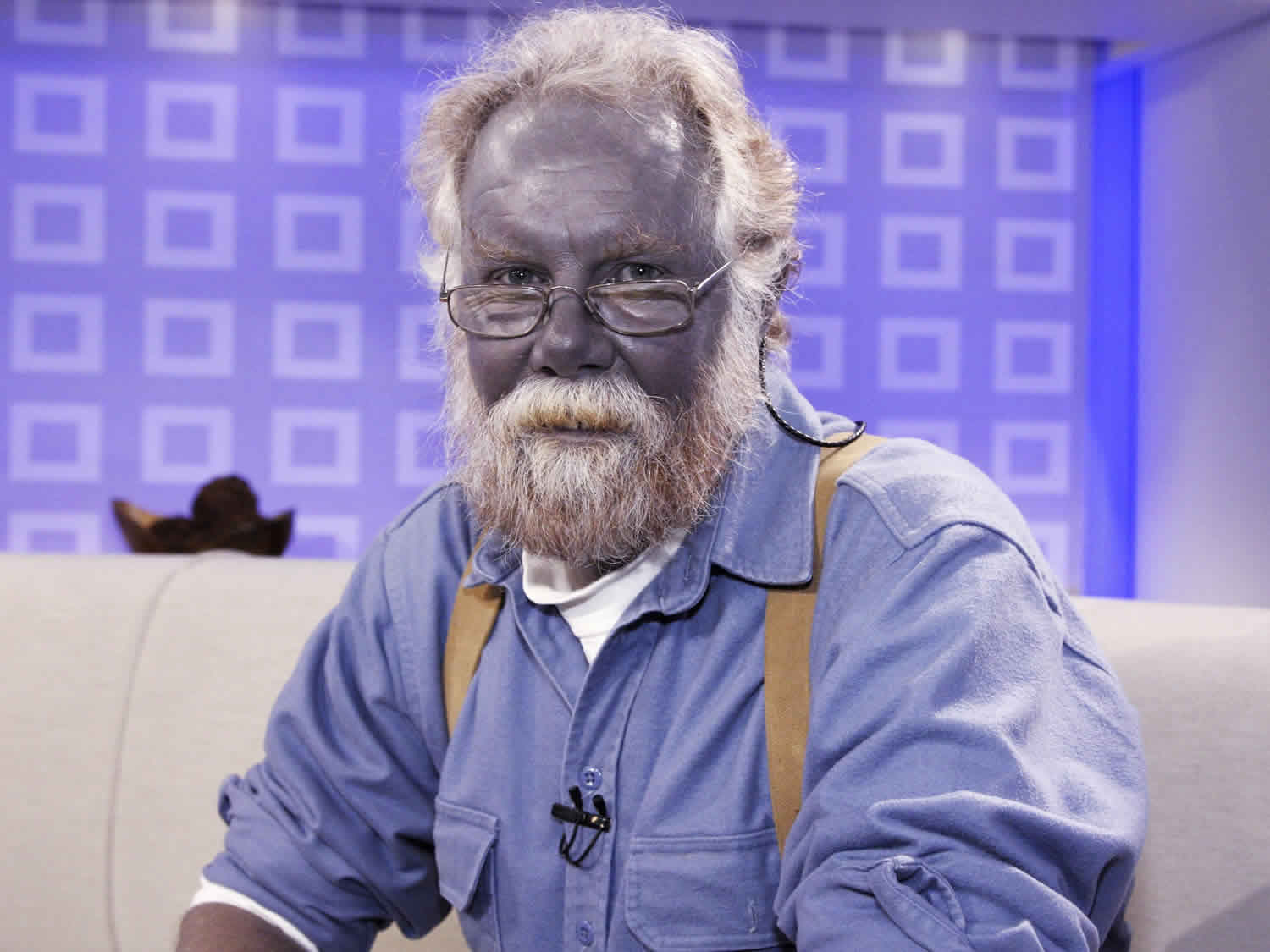 Argyria is a rare disease caused by the chronic absorption silver content products which surpass the body’s kidney and liver excretory capacities, leading to silver granules being deposited in the skin and its appendages, mucosae and internal organs (including the eye, kidney, spleen, bone marrow and central nervous system), and causing them to acquire a blue-grey pigmentation 1). Argyria is characterized by gray to gray-black staining of the skin and mucous membranes produced by silver deposition. Silver may be deposited in the skin either from industrial exposure or as a result of medications containing silver salts. The amount of absorbed silver required to cause generalized Argyria pigmentation is unknown 2). Several different types of exposure (accidental, therapeutic, occupational and environmental), routes of administration (oral, intranasal and percutaneous) and intervals of exposure from 8 months to 5 years have been described 3).

Whether or not a person exposed to prolonged or high levels of silver develops argyria depends on many factors including the dose and form of exposure, the duration of exposure, and the route of exposure (ie: ingested, inhaled, skin contact). What is apparent is that the degree of hyperpigmentation in patients is directly correlated with the amount of silver present.

Generalized argyria usually begins with a grey-brown staining of the gums which later progresses to involve large areas of the skin.

Localized argyria can occur in the eye (ocular argyrosis) from the overuse of silver containing eyedrops or cosmetic makeup. Sometimes, this may be the first objective sign of generalized argyria. Other forms of localized argyria are the appearance of blue macules at sites of acupuncture needles and silver earring sites.

How much colloidal silver causes argyria?

The normal human body contains approximately 1 mg of silver. Great individual variability exists in the length of exposure and total dose needed to result in argyria. The smallest amount of silver reported to produce generalized argyria in humans ranges from 4-5 g to 20-40 g. Silver at 50-500 mg/kg body weight is the lethal toxic dose in humans 4).

Yes. Unfortunately, the pigmentation is permanent and almost untreatable.

How does silver toxicity occur?

Silver enters the body either by mechanical impregnation of the skin by small silver particles or by ingestion of silver compounds. Most occupational argyria is due to the direct impregnation of silver salts from prolonged contact with skin. Silver taken orally or absorbed by mucous membranes is carried through blood bound to the plasma protein albumin. Some of this silver is carried as a salt and may be deposited in various tissues, with highest concentrations found in the skin, liver, spleen and adrenals. Most absorbed silver is excreted in feces and some in the urine.

Silver toxicity is rare today. However, there have been several reports of people getting argyria after using colloidal silver-based products as ‘cure-alls’. In several cases patients were manufacturing colloidal silver suspension at home using instructions downloaded from the Internet. Circus freak Captain Fred Walters the blue man, ingested silver nitrate to deepen his color and improve his income, but died from the habit.

There may be a genetic predisposition for argyria.

There are several sources of exposure to silver.

The most common cause of argyria is mechanical impregnation of the skin by small silver particles in workers involved in silver mining, silver refining, silverware and metal alloy manufacturing, metallic films on glass and china, electroplating solutions, and photographic processing. Colloidal silver dietary supplements are marketed widely for cancer, AIDS, diabetes mellitus, and herpetic infections 6). Cases have followed the prolonged use of silver salts for the irrigation of urethral or nasal mucous membranes, in eye drops, wound dressing, and the excessive use of an oral smoking remedy containing silver acetate 7).

Argyria has also been attributed to surgical and dental procedures (e.g., silver amalgam-tattooing, silver sutures used in abdominal surgery). Blue macules have appeared at sites of acupuncture needles and silver earring sites 8). Great individual variability exists in the length of exposure and total dose needed to result in argyria.

Early on, a gray-brown staining of the gums develops, later progressing to involve the skin diffusely. The cutaneous pigmentation usually is a slate-gray, metallic, or blue-gray color and may be clinically apparent after a few months, but clinical appearance usually takes many years and depends on the degree of exposure.

The hyperpigmentation is most apparent in the sun-exposed areas of skin, especially the forehead, nose, and hands.

In some patients, the entire skin acquires a slate blue-gray color.

The sclerae, nail beds, and mucous membranes may become hyperpigmented.

Viscera tend to show a blue discoloration, including the spleen, liver, and gut, findings evident during abdominal surgery or at postmortem examination.

Rarely, black tears (melanodacryorrhea) can appear during argyrosis of the conjunctiva.

The systemic toxic effects of silver may include the following:

Current thought holds that the substantial amounts of silver in argyria usually result in no serious effects on human health. However, a few cases have notable clinical symptoms and signs. This lack of significant systemic silver toxicity in argyria may be due to the interaction of selenium and sulfur with silver in vivo.

It was reported that argyria can be associated with unexpected and quickly developing severe radiation dermatitis during chemoradiotherapy treatment 9).

Argyria is a rare condition and unfamiliarity with this condition may lead to its misdiagnosis. The diagnosis of argyria is established by skin biopsy with formaldehyde-fixed paraffin-embedded sections stained with hematoxylin-eosin.

In vivo silver concentrations can be measured using x-ray fluorescence 10).

Dermoscopy, reflectance confocal microscopy, and high-definition optical coherence tomography can be used in the diagnosis of generalized argyria 11).

Unfortunately, the argyria pigmentation is permanent and almost untreatable.

To prevent further exposure, stop ingestion of silver and application of all silver containing remedies. Protective wear can be used to prevent occupational exposure.

Sunscreens and opaque cosmetics may be helpful in preventing further pigmentary darkening and aid in masking obvious discoloration. Cosmetic camouflage may be useful in disguising the appearance.

Chelation attempts to remove silver from the body have been unsuccessful.

The treatment of argyria caused by colloidal silver ingestion using the Q-switched 1064-nm Nd:YAG laser has been reported 13) and a picosecond 755-nm Q-switched alexandrite laser has also been used with success for treatment 14).