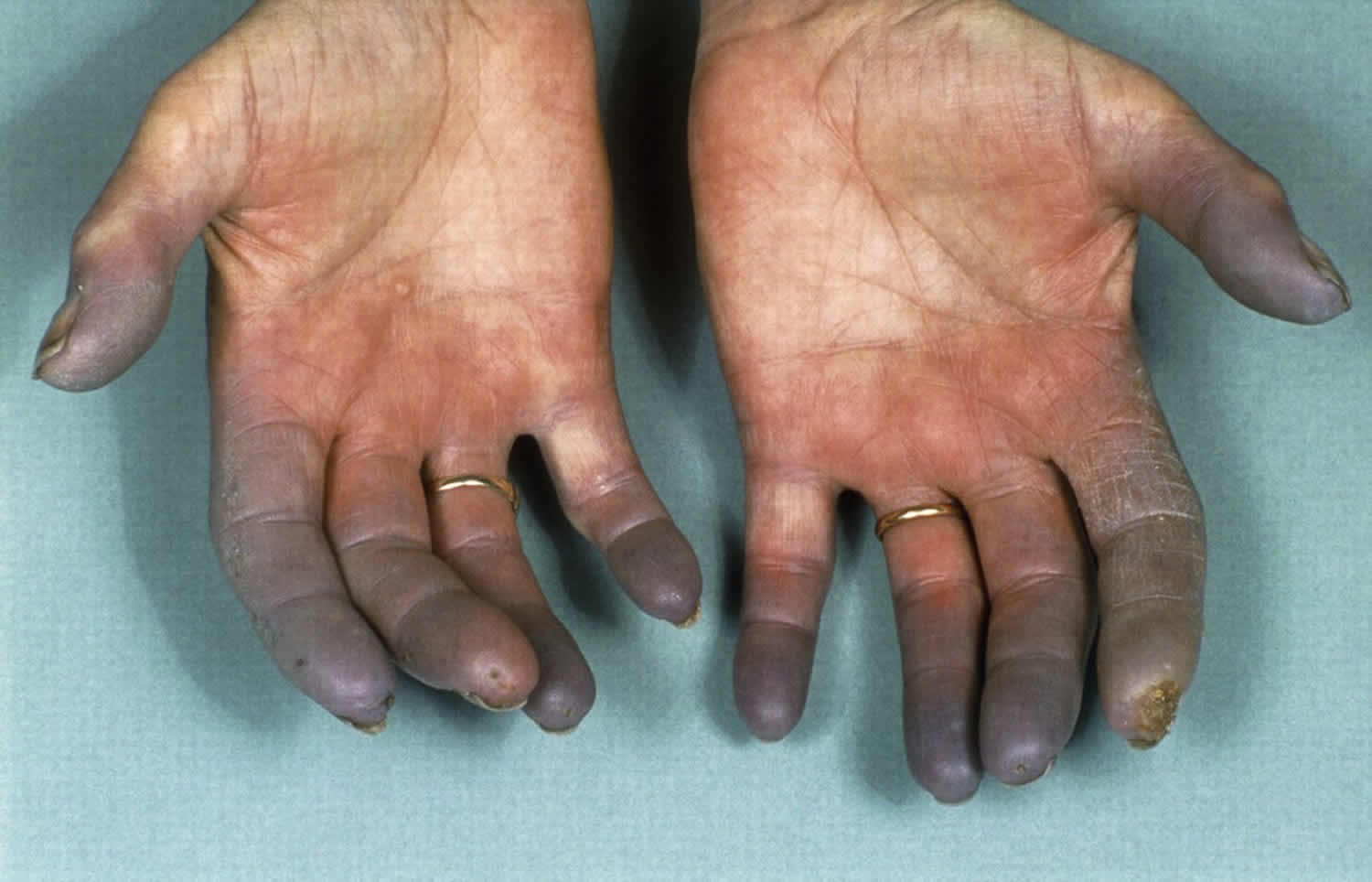 What is Buerger’s disease

When blood doesn’t flow well to your hands and feet, especially during activity, you may have pain and tissue damage. In the worst cases, sores (ulcers) appear on your fingers and toes due to poor circulation to the skin and tissue. The ulcers can become infected and cause gangrene. In a small number of people, Buerger disease reduces blood flow to the heart, belly, or brain.

If Buerger’s disease worsens, blood flow to your arms and legs decreases. This is due to blockages that make it hard for blood to reach the tips of your fingers and toes. Tissues that don’t receive blood don’t get the oxygen and nutrients they need to survive.

People at the greatest risk for Buerger disease are those who are heavy smokers. Men of Asian or Eastern European descent, who are between ages 20 and 40 seem to be especially at risk. Buerger’s disease has also been identified in cigar smokers, marijuana users, and those who use smokeless tobacco such as chewing tobacco and snuff. Buerger’s disease is a rare disorder, especially in countries where the use of tobacco has declined.

Experts suspect that some people may have a genetic predisposition to the disease. It’s also possible that the disease is caused by an autoimmune response in which the body’s immune system mistakenly attacks healthy tissue.

It isn’t clear how tobacco use increases your risk of Buerger’s disease, but virtually everyone diagnosed with Buerger’s disease uses tobacco. It’s thought that chemicals in tobacco may irritate the lining of your blood vessels, causing them to swell. The rates of Buerger’s disease are highest in areas of the Mediterranean, Middle East and Asia where heavy smoking is most common.

Long-term infection of the gums also is linked to the development of Buerger’s disease.

Buerger’s disease is far more common in males than in females. However, this difference may be linked to higher rates of smoking in men.

Quitting smoking can be hard. If you’re like most people who smoke, you’ve probably tried to quit in the past. It’s never too late to try again. Talk to your doctor about strategies to help you quit.

While no tests can confirm whether you have Buerger’s disease, your doctor will likely order tests to rule out other more common conditions or confirm suspicion of Buerger’s disease brought on by your signs and symptoms. Tests may include:

Blood tests to look for certain substances can rule out other conditions that may cause similar signs and symptoms. For instance, blood tests can help rule out scleroderma, lupus, blood-clotting disorders and diabetes, along with other diseases and conditions.

Next, you open your hand and your doctor releases the pressure on one artery, then the other. How quickly the color returns to your hand may give a general indication about the health of your arteries. Slow blood flow into your hand may indicate a problem, such as Buerger’s disease.

An angiogram helps to see the condition of your arteries. An angiogram can be done non-invasively with the use of CT or MRI scans.

Or it may be done by threading a catheter into an artery. During this procedure, a special dye is injected into the artery, after which you undergo a series of rapid X-rays. The dye helps to delineate any artery blockages that show up on the images.

There is no cure for Buerger’s disease. Treatment may depend on how far your disease has progressed. It will focus on trying to improve blood flow to the affected area or to reduce pain. Choices include:

Some medicines help to relax the blood vessels and improve blood flow to the tissue.

Although no treatment can cure Buerger’s disease, the most effective way to halt the disease’s progress is to quit using all tobacco products. Even a few cigarettes a day can worsen the disease.

Your doctor can counsel you and recommend medications to help you stop smoking and stop the swelling in your blood vessels. You’ll need to avoid nicotine replacement products because they supply nicotine, which activates Buerger’s disease; there are non-nicotine products that you can use. If the disease is still active, your doctor may check your urine for the presence of nicotine to see if you’re still smoking.

Another option is a residential smoking cessation program. In these programs, you stay at a treatment facility, sometimes a hospital, for a set number of days or weeks. During that time you participate in daily counseling sessions and other activities to help you deal with the cravings for cigarettes and to help you learn to live tobacco-free.

Other treatment approaches exist but are less effective. Options include:

Take care of your fingers and toes if you have Buerger’s disease. Check the skin on your arms and legs daily for cuts and scrapes, keeping in mind that if you’ve lost feeling to a finger or toe you may not feel, for example, a cut when it happens. Keep your fingers and toes protected and avoid exposing them to cold.

Clean any cut with soap and water, apply antibiotic ointment, and cover it with a clean bandage. Keep an eye on any cuts or scrapes to make sure they’re healing. If they get worse or heal slowly, see your doctor promptly.

Visit your dentist regularly to keep your gums and teeth in good health and avoid gum disease, which in its chronic form is linked to Buerger’s disease.