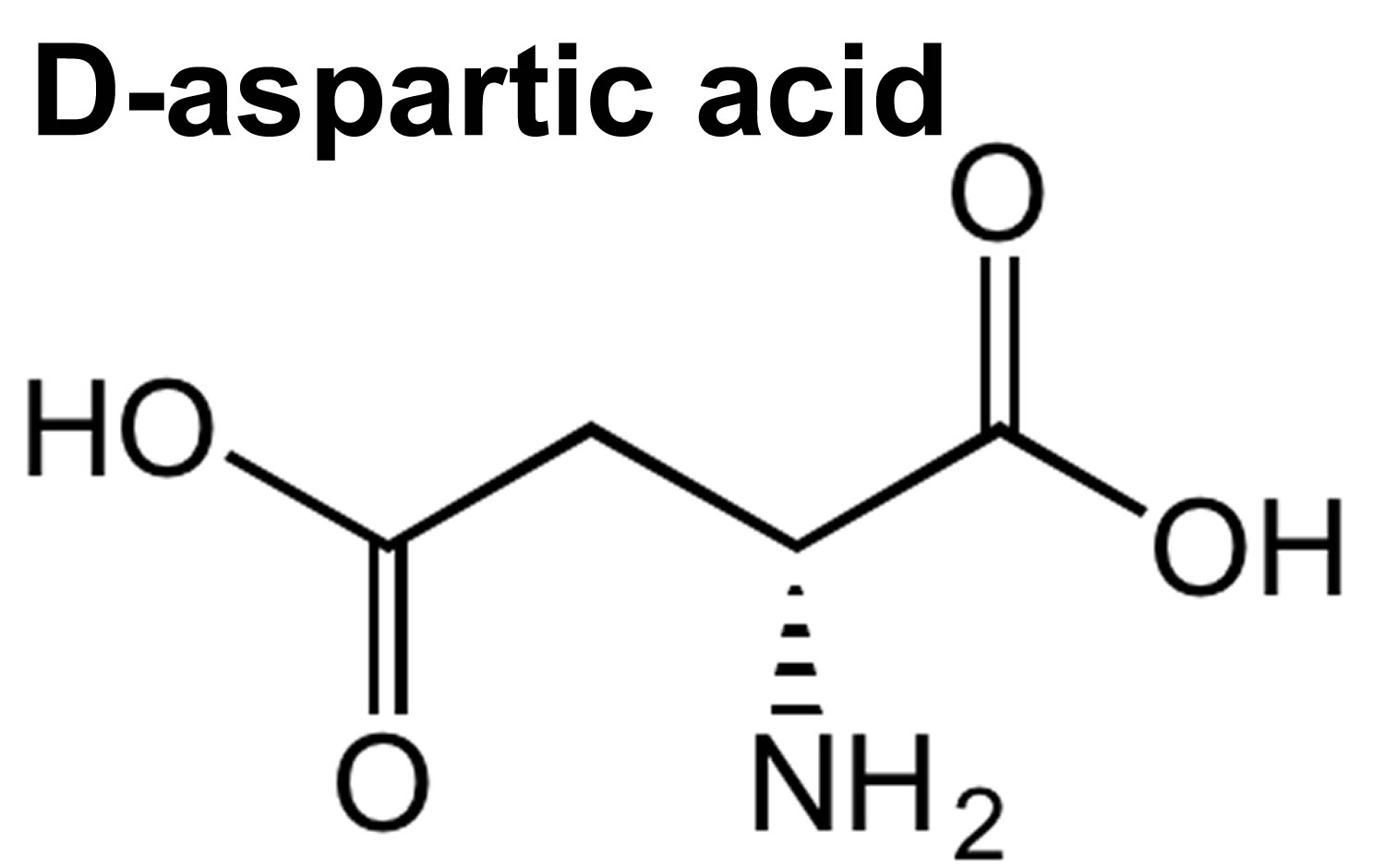 What does d aspartic acid do

The potential adverse effects of D-aspartic acid on testosterone, in addition to affecting hypertrophic outcomes, may also have an effect on the neural mechanisms associated with increased muscular strength. Strength appears to be a function of both the size 17) and composition of muscle 18), in addition to the rate and magnitude of output from the nervous system 19). Resistance training increases the voluntary activation of the nervous system 20), in addition to increasing the input-output response of cells in the spinal cord 21). There is a growing body of research that suggests D-aspartic acid fills the criteria of a neurotransmitter 22), which potentially could provide strength improvements via increased neurotransmitter availability. Neural plasticity, which is observed in untrained individuals is a key explanatory mechanism of strength development 23), and can involve cells at the spinal and supraspinal level. Measures of neural plasticity that examine spinal and supraspinal output, such as the H-reflex and V-wave respectively, have not been measured following a period of resistance exercise in trained individuals and as such, it is not clear if trained populations have the same neural adaptation response to resistance training as untrained individuals. The link between testosterone and changes in the corticospinal pathway has been explored in humans with artificially induced testosterone levels 24). These increases in testosterone were concurrent with reduced threshold of the evoked potentials from transcranial magnetic stimulation (TMS), indicating that testosterone can positively increase the output from a given input, within the corticospinal pathway 25). It is plausible that artificially changing testosterone levels, via supplementation may affect strength or power, by altering the efficiency of the corticospinal pathway. The effects of D-aspartic acid on neural plasticity has yet to be researched in humans.

This comprehensive systematic review 26) showed that exogenous D-aspartic acid enhances testosterone levels in male animal studies, whereas studies in human yielded inconsistent results. The evidence for this association in man is still sparse, mostly because of the lack of good quality studies. Short-term supplementation (14 days) has been shown to reduce testosterone levels in resistance-trained men 27). The results of this randomized, double-blind, placebo controlled trial 28) in healthy resistance-trained men, aged 18–36, who had been performing regular resistance training exercise for at least 3 days per week for the previous 2 years, indicated that d-aspartic acid supplementation is ineffective at changing testosterone levels, or positively affecting training outcomes. Randomized participants were 22 men (d-aspartic acid n = 11; placebo n = 11) (age, 23.8±4.9 year, training age, 3.2±1.5 year). Reductions in estradiol and the blunting of peripheral excitability appear unrelated to improvements from resistance training.

In another randomized, double-blind interventional study by Willoughby et al, 29) twenty apparent healthy and heavy resistance-trained men were enrolled (49). The participants trained 4 times/week while orally ingesting either 3 grams of placebo or D-aspartic acid supplementat in the morning upon waking. After 28 days D-aspartic acid supplementation had no effect on muscle strength, body mass and serum hormones (total testosterone, free testosterone, LH, GnRH and estradiol). Unlike the previous study, participant demographics had been well described such as age, weight and height. All participants passed a mandatory medical screening.

Another clinical trial study, by Bloomer et al 30) investigated the effect of D-aspartic acid/sodium nitrate/ vitamin D3 supplement on blood total and free testosterone and nitrate/nitrite before and after 14 and 28 days in 10 overweight or obese men with the average age of 42 years. Although in this study basal testosterone levels of subjects were low (approximately 3 ng/mL), after 14 and 28 days of supplementation, testosterone levels were not statistically significant and that is similar to the results obtained by Topo et al 31) and Willoughby et al 32). This is contrary with the hypothesis that D-aspartic acid supplementation is effective with lower testosterone levels.

The supplementation of D-aspartic acid caused a marked reduction in estradiol levels. Mechanistically, estradiol was potentially reduced via disruption of the testosterone-estradiol aromatase pathway 39). In the animal model, both positive 40) and negative 41) relationships have been observed between gonadal D-aspartic acid and estradiol. Additionally, in vitro research has observed both increased 42) and decreased 43) estradiol levels with D-aspartic acid supplementation. With this conflicting data, the effects of D-aspartic acid on estradiol in the animal model is unclear. In resistance-trained men estradiol remains unchanged over two 44) and four weeks 45) from a resistance training and supplement protocol. Despite an observed reduction of estradiol in the present study, the training outcomes clearly demonstrate similar improvements in hypertrophy and strength. This is further evidence that basal hormonal fluctuations within normal ranges are not key explanatory mechanisms of training outcomes, rather it is likely intrinsic mechanisms that explain training improvements and that hormones play a permissive role in training adaptions. Intrinsic mechanisms pertaining to hypertrophy include the activation of various signalling pathways (Akt/mTOR, PA/mTOR, mechanoreceptor), phosphorylation of intramuscular signalling proteins, regulation of messenger RNA (translation initiation), increases in AR content, satellite cell activity and expression of muscle-specific microRNA 46). For strength it appears that neural adaptation mechanisms such as earlier recruitment of type II motor units, as demonstrated by a reduction in recruitment threshold distributions; increased observation of ‘true’ doublet spikes; or increased maximal firing frequency of motor units during voluntary ballistic contractions shown by a reduction of inter-spike intervals; increase in efferent neural drive to the muscle: and an increase in the firing frequency of the motor units 47) are driving improvements.

This is the first study 48) to examine changes in the H-reflex pathway following a period of resistance exercise in trained men. These results demonstrate for the first time improvements in responsiveness at the level of the alpha motoneuron, similar to that which is observed in novice populations 49). Mechanistically, this could be a result of improved excitability of the alpha motoneuron, improved excitability of the Ia afferent loop, or a decrease in presynaptic inhibition at the level of the interneuron 50).

Improved excitability of the H-reflex pathway in the placebo group was blunted by D-aspartic acid supplementation. It is plausible since D-aspartic acid appears to fit the role of a neurotransmitter 51), that D-aspartic acid is inhibiting the capacity of the neurotransmitter system to adapt over time to the resistance exercise stimulus. D-aspartic acid can enter the neuron via L-glutamate transporters 52). However, the transport of D-aspartic acid could be saturating the L-glutamate transporters. This, in turn, might inhibit a more potent neurotransmitter, such as glutamate 53) and ultimately result in blunted neural adaption. As both groups equally improved plantar flexor isometric and dynamic strength (10RM values), the contribution of between-group differences observed in excitability of the spinal pathway appears negligible. The H-reflex utilises the same pathway as the myotatic reflex 54), which is important reflex in the context of power development because it activates alpha motoneuron activity in a rapidly stretched muscle 55). A potential limitation of this study is the lack of testing for dynamic power (e.g. plyometric testing), as this would help clarify the relevance of the improved H-reflex excitability from the perspective of functional power.

The present study 56) showed that V/Mmax ratio in the plantar flexors did not improve over the course of the training study, suggesting that neither D-aspartic acid supplementation nor training affected supraspinal drive to the plantar flexors in this population. Research in novice populations has demonstrated increases in V/Mmax ratio with resistance training 57), however resistance-trained individuals (e.g. weightlifters) demonstrate significantly larger V-wave responses in comparison to inexperienced trainers 58). Data on endurance training has failed to show any improvements in V-wave measures, suggesting that the improvement of neural drive is an adaptation exclusive to resistance training 59). The results of the current study 60) present novel evidence, demonstrating that resistance-trained individuals do not improve supraspinal drive to the plantar flexors with three months of resistance training. This could suggest that there is a ceiling for adaptation of supraspinal drive and that further neural improvements are exclusive to changes of excitability within the spinal cord. The data from the present study exhibited high variability between subject’s V-waves, which might suggest an issue with the sensitivity of the method that was used. Additionally, the reliance of V-waves to measure a change in supraspinal drive is a limitation of this study. The inclusion of additional measures of corticospinal function from the use of transcranial stimulation techniques may have provided clearer insight into potential supraspinal changes.

D-aspartic acid is currently purported as a testosterone boosting supplement. The results of this study 61) suggests it does not, the study also adds to the body of evidence that changes in basal hormonal levels within the normal physiological range play a minor role with respect to training outcomes. The long-term effects of D-aspartic acid did not provide any benefit in relation to strength or hypertrophy in a resistance-trained population 62). Additionally, D-aspartic acid appears to be blunting neural adaptation that was evident in the placebo group. As such, the results of this study strongly suggest that D-aspartic acid is not an ideal supplement for resistance-trained men and cannot be recommended for long-term use with resistance training.

The effects of D-aspartic acid have yet to be explored in either a female population, where mechanisms of D-aspartic acid and testosterone manipulation could differ. Additionally, an elderly population, with decreased testosterone levels, may benefit from D-aspartic acid supplementation combined with resistance training, as some research has demonstrated that D-aspartic acid can improve testosterone levels in untrained men. The mechanisms driving power adaptations in untrained individuals are well researched, however, in a resistance-trained population the data is lacking. The link between neural plasticity and changes in functional power from resistance training, from a resistance-trained context could also be explored. Additionally, future studies could further test the theory that resistance-trained individuals experience a ceiling effect with supraspinal neural adaptations, or if they have the ability to continue to improve supraspinal drive.