Fibrinogen is a protein, a coagulation factor (clotting factor 1) that occurs naturally in your body and is essential for blood clot formation. Fibrinogen is produced by your liver and released into circulation along with several other coagulation factor proteins. Fibrinogen has a biological half-life of 3 to 5 days in the circulating plasma. Normally, when a body tissue or blood vessel wall is injured, a process called hemostasis begins to help stop the bleeding by forming a plug at the injury site. Small cell fragments called platelets adhere to and aggregate at the site, a coagulation cascade begins, and clotting factors are activated one after the other.

As the cascade nears completion, thrombin converts soluble fibrinogen into insoluble fibrin strands that crosslink and form a clot. These strands crosslink together to form a fibrin net that stabilizes at the injury site. The fibrin net adheres to the site of injury along with the platelets to form a stable blood clot. This barrier prevents additional blood loss and remains in place until the injured area has healed. 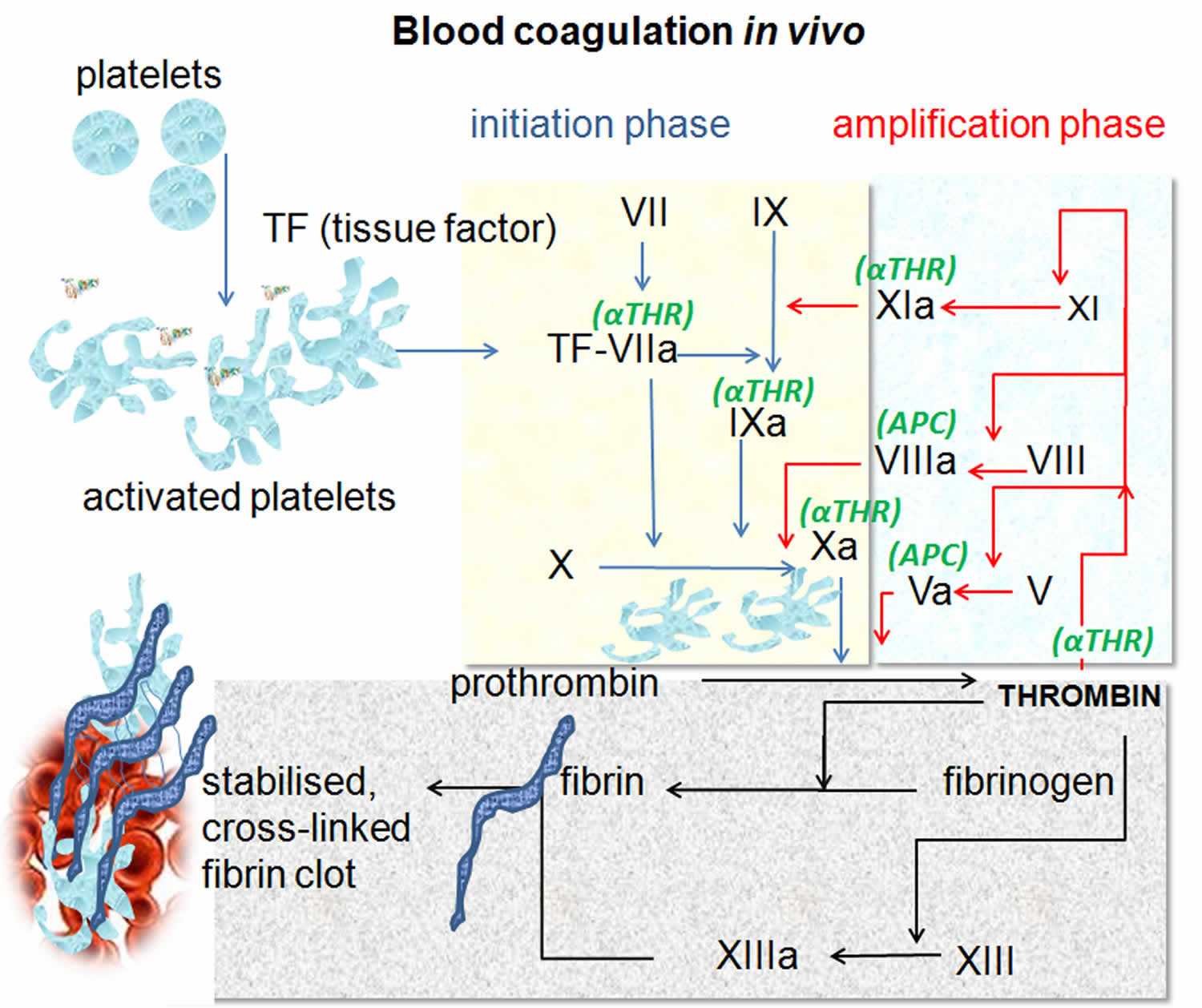 For a stable clot to form there must be enough normally functioning platelets and coagulation factors. If there are dysfunctional coagulation factors or platelets, or too little or too much of them, it can lead to bleeding episodes and/or to formation of an in appropriate blood clot (thrombosis). Several laboratory tests, including fibrinogen tests, can be used to evaluate hemostasis.

Fibrinogen is an acute phase reactant, so a number of acquired conditions can result in an increase in its plasma concentration:

The finding of an increased level of fibrinogen in a patient with obscure symptoms suggests an organic rather than a functional condition. Chronically increased fibrinogen has been recognized as a risk factor for development of arterial thromboembolism.

Pregnancy is associated with a hypercoagulable state 1) and these changes occur in preparation for blood loss at the time of parturition. During pregnancy, there is an increase in procoagulant activity (characterized by increases in factors V, VII, VIII, IX, X, XII and XII, von Willebrand factor, fibrinogen), decreases in endogenous anticoagulant activity (characterized by increases in heparin cofactor II, a1 antitrypsin, protein S activity and activated protein C resistance), and depressed fibrinolytic activity 2). Of note, fibrinogen levels increase with advancing gestation and in the third-trimester are higher than those in non-pregnant women 3).

How should I use fibrinogen?

Man-made fibrinogen is used to treat bleeding episodes in people with a congenital fibrinogen deficiency. Fibrinogen is made from human plasma (part of the blood) which may contain viruses and other infectious agents. Donated plasma is tested and treated to reduce the risk of it containing infectious agents, but there is still a small possibility it could transmit disease. Talk with your doctor about the risks and benefits of using fibrinogen.

You should not use fibrinogen if you are allergic to it, or if you have ever had a severe allergic reaction.

To make sure fibrinogen is safe for you, tell your doctor if you have:

It is not known whether fibrinogen will harm an unborn baby. Tell your doctor if you are pregnant or plan to become pregnant.

It is not known whether fibrinogen passes into breast milk or if it could harm a nursing baby. Tell your doctor if you are breast-feeding a baby.

Your doctor will perform blood tests to make sure you do not have conditions that would prevent you from safely using fibrinogen.

Follow all directions on your prescription label. Do not use fibrinogen in larger or smaller amounts or for longer than recommended.

Fibrinogen is injected into a vein through an IV. You may be shown how to use an IV at home. Do not give yourself fibrinogen if you do not understand how to use the injection and properly dispose of needles, IV tubing, and other items used.

Fibrinogen is a powder medicine that must be mixed with a liquid (diluent) before using it. If you are using the injections at home, be sure you understand how to properly mix and store the medicine.

Fibrinogen contains no preservative. Once you have pierced the rubber top of a vial with a needle, you must use that vial right away or throw it away.

Do not shake the medication bottle or you may ruin the fibrinogen. Prepare your dose only when you are ready to give an injection. The fibrinogen mixture should be clear or slightly colored. Do not use if fibrinogen has changed colors or has particles in it. Call your pharmacist for new medicine.

Mixed fibrinogen must be used within 24 hours if you keep it at room temperature.

Each single-use vial (bottle) of fibrinogen is for one use only. Throw away after one use, even if there is still some fibrinogen left in it after injecting your dose.

Use a disposable needle only once. Follow any state or local laws about throwing away used needles and syringes. Use a puncture-proof “sharps” disposal container (ask your pharmacist where to get one and how to throw it away). Keep this container out of the reach of children and pets.

Tell your doctor if you have any changes in weight. Fibrinogen doses are based on weight, and any changes may affect the dose.

You may need frequent medical tests to help your doctor determine how long to treat you with fibrinogen.

Store the unmixed fibrinogen powder in a refrigerator or in a dark cool place. Protect from light and do not allow it to freeze. Throw away any unused vial after the expiration date on the label has passed.

What happens if I miss a dose?

What are the possible side effects of fibrinogen?

Get emergency medical help if you have signs of an allergic reaction: hives, rash; tightness in your chest; wheezing, difficult breathing; feeling like you might pass out; swelling of your face, lips, tongue, or throat.

Stop using fibrinogen and call your doctor at once if you have:

Common side effects may include:

This is not a complete list of side effects and others may occur. Call your doctor for medical advice about side effects.

What other drugs will affect fibrinogen?

Other drugs may interact with fibrinogen, including prescription and over-the-counter medicines, vitamins, and herbal products. Tell each of your health care providers about all medicines you use now and any medicine you start or stop using.

Fibrinogen is a protein, a coagulation factor (factor I) that helps your blood to clot. Two types of tests are available to evaluate fibrinogen:

It is now understood that coagulation tests are based on what happens artificially in the test setting (in test tube) and thus do not necessarily reflect what actually happens in the body (in vivo). Nevertheless, the tests can be used to evaluate specific components of the hemostasis system. The fibrinogen activity test evaluates that part of the hemostatic process in which soluble fibrinogen is converted into fibrin threads. With the addition of thrombin to the test sample, the fibrinogen test bypasses the rest of the coagulation factors and focuses on the function of fibrinogen.

Blood transfusions within the past month may affect fibrinogen test results.

People with liver disease may develop acquired dysfibrinogenemia that could contribute to bleeding or thrombosis.

When is fibrinogen test ordered?

A health practitioner may order a fibrinogen activity test when someone:

A fibrinogen antigen test may be performed when someone has a low result on a fibrinogen activity test to help determine whether it is due to insufficient or dysfunctional fibrinogen.

High fibrinogen levels have also been associated with coronary heart disease, myocardial infarction, and peripheral arterial disease. In some cases, fibrinogen activity testing is performed along with other tests when a health practitioner wants to evaluate an individual’s risk of developing cardiovascular disease.

How is fibrinogen test used?

Fibrinogen blood testing is used to evaluate fibrinogen, a protein that is essential for blood clot formation. When there is an injury and bleeding occurs, the body forms a blood clot through a series of steps. In one of the last steps, soluble fibrinogen is converted into insoluble fibrin threads that crosslink together to form a net that stabilizes and adheres at the injury site until the area has healed.

What is the difference between tests for fibrinogen, d-dimer, and fibrin degradation products?

Fibrinogen activity testing evaluates the conversion of fibrinogen into fibrin; fibrinogen antigen testing measures the amount of soluble Factor I (dissolved in the blood) before it has been turned into insoluble fibrin and been crosslinked into a fibrin net. D-dimer and fibrin degradation product testing both help evaluate the status of the fibrinolytic system, the body’s ability to break blood clots apart when they are no longer needed so that they can be removed. Fibrin degradation product is a measurement of all of the fragments of the dissolving clot, while D-dimer is a more specific measurement for one of the crosslinked, break-down fragments.

What does fibrinogen test result mean?

Fibrinogen test results are reported as the concentration of the protein in the blood. Fibrinogen activity tests are converted into concentrations for comparison with fibrinogen antigen results.

Sometimes a health practitioner will use a ratio of the antigen test and the activity test. This is to help to distinguish dysfibrinogenemia (high ratio) from hypofibrinogenemia (ratio close to 1).

Can I have decreased or abnormal fibrinogen and not know it?

Yes. Many people have relatively normal clotting even when fibrinogen concentrations and/or activity are low. Your condition may not be identified unless you bleed longer than expected after a surgical procedure or trauma or have coagulation-related testing performed for another reason, such as part of a pre-surgical screen.

Fibrinogen is an acute phase reactant, meaning that fibrinogen concentrations may rise sharply in any condition that causes inflammation or tissue damage. Elevated concentrations of fibrinogen are not specific; that is, they do not tell the health practitioner the cause or location of the disturbance. Usually these elevations in the fibrinogen level are temporary, returning to normal after the underlying condition has been resolved.

Elevated fibrinogen levels may be seen with:

While fibrinogen levels are elevated, a person’s risk of developing a blood clot may be increased and, over time, they could contribute to an increased risk for developing cardiovascular disease.

What can I do to reduce my fibrinogen level?

If your fibrinogen concentration is elevated due to pregnancy or to an acute inflammatory process, it will likely return to normal by itself once the underlying condition has resolved. If it is due to an acquired condition such as rheumatoid arthritis, there may be very little you can do to affect the level. If your health care provider has told you that elevated fibrinogen levels are increasing your risk of cardiovascular disease, you can make lifestyle changes that will affect other cardiac risk factors, such as reducing your cholesterol and raising your HDL (high density lipoproptein also known as “good” cholesterol). There is also some evidence that diets rich in omega-3 and omega-6 fatty acids (fish oils) may help reduce fibrinogen levels.