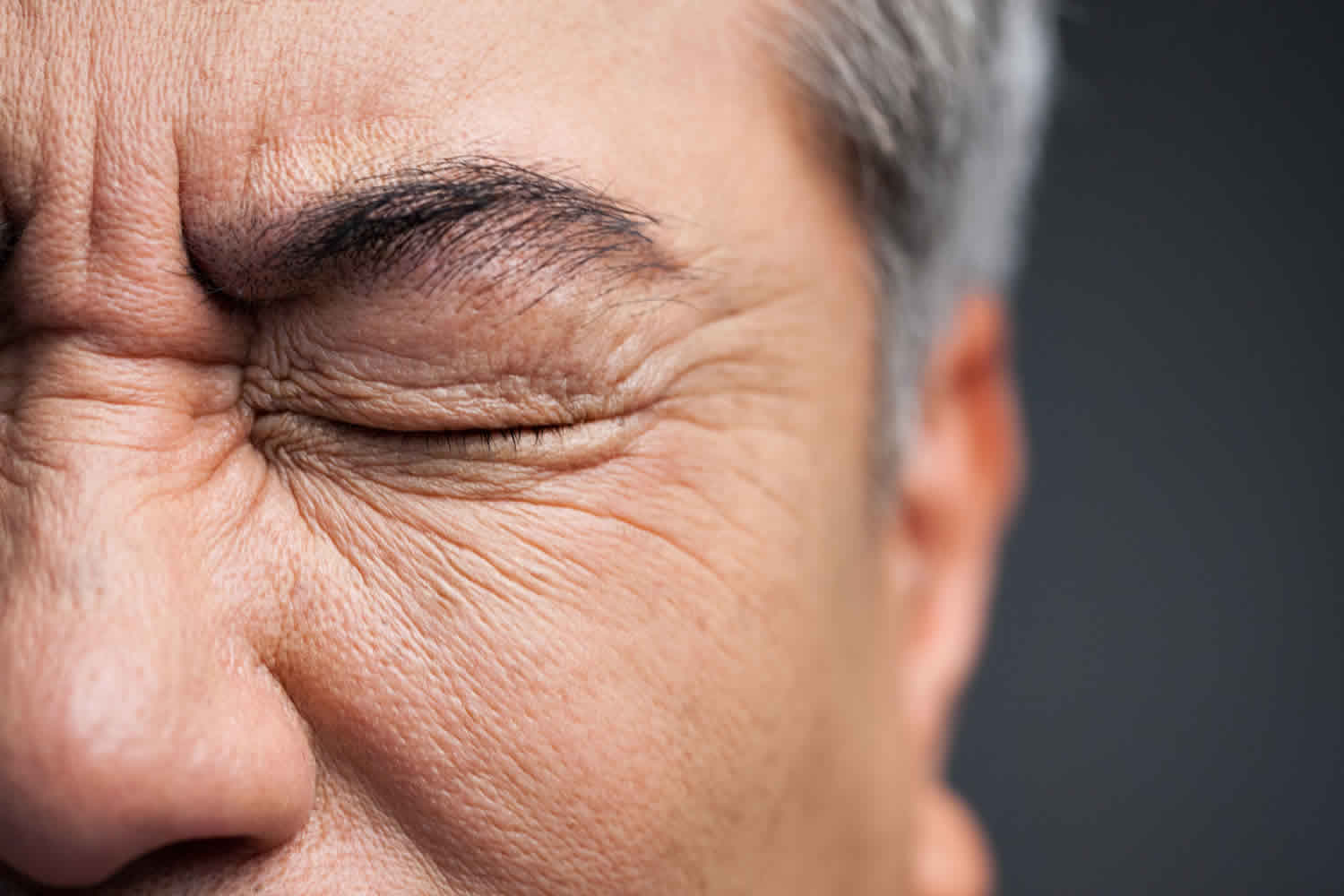 Hyperalgesia is increased sensitivity to pain or increased pain from a stimulus that normally provokes pain 1). Hyperalgesia reflects increased pain on suprathreshold stimulation. This is a clinical term that does not imply a mechanism. For pain evoked by stimuli that usually are not painful, the term allodynia is preferred, while hyperalgesia is more appropriately used for cases with an increased response at a normal threshold, or at an increased threshold, e.g., in patients with neuropathy. It should also be recognized that with allodynia the stimulus and the response are in different modes, whereas with hyperalgesia they are in the same mode. Current evidence suggests that hyperalgesia is a consequence of perturbation of the nociceptive system with peripheral or central sensitization, or both, but it is important to distinguish between the clinical phenomena, which this definition emphasizes, and the interpretation, which may well change as knowledge advances. Hyperalgesia may be seen after different types of somatosensory stimulation applied to different tissues.

The official International Association for the Study of Pain definition of allodynia is “pain due to a stimulus that does not normally provoke pain” 3). An example would be a light feather touch (that should only produce sensation) causing pain. Allodynia is different from hyperalgesia, which is an exaggerated response from a normally painful stimulus, although both can and often do co-exist. Both are types of neuropathic pain 4).

An example of the difference between allodynia and hyperalgesia on the physical exam would be softly rubbing a cotton-tipped swab against a patient’s skin. Lightly brushing a swab against the skin would cause a low-level stimulus, but should not elicit a pain response. A patient who experiences pain with a stimulus that should only cause sensation may have allodynia. If the clinician significantly increases the degree of pressure, some pain would be part of a normal response. A patient who feels an excessive amount of pain would be noted to have hyperalgesia. Thus, on physical exam, allodynia presents as a lowering of the pain threshold, while hyperalgesia presents as a heightening of response 5). While this often means that allodynia and hyperalgesia seem to exist along the same continuum of stimuli on physical exam, there is still a clear difference in modalities. With allodynia, the response to the stimulus differs from those who have normal sensation, while in hyperalgesia, the response to the stimulus is the same as those who have normal sensation, but it is an exaggerated response.

Allodynia can be due to an underlying disease such as diabetes-induced neuropathic tactile allodynia or can be the primary disease process itself, such as in postherpetic neuralgia. It is often further classified by the type of stimulus causing the nociception, such as tactile, thermal, dynamic or static allodynia, or by the principal site of nociception, such as cutaneous allodynia 6).

Allodynia is a symptom, not a disease. The exact cause behind allodynia is unknown 7). Allodynia is the phenomenon of a non-painful stimulus producing a sharp pain response, which implies an error in neuronal conduction. The mechanism behind this error is unclear. The strongest existing evidence suggests that sensory neuronal fibers may stimulate pain pathways, possibly due to an error in long-term potentiation. However, studies exist that suggest that superficial sensory components may also have involvement, as well as evidence that different mental states can affect the perception of allodynia. If we use the analogy of crisscrossed fibers, the actual location of the crisscrossing can vary and may be located almost anywhere along the peripheral to the central nervous system tract. Allodynia can involve both the peripheral nervous system and central nervous system via sensitization, and the mechanism behind the inappropriate pain sensations can evolve over time; this might partially explain the existing contradictory studies – they may all be measuring allodynia with neuronal confusion at different locations.

A non-painful stimulus such as light skin touch should only activate the low threshold A-beta fibers. In cutaneous allodynia, these A-beta fibers then also communicate with and activate pain pathways, through different sodium channel types than the Nav1.7 sodium channels usually associated with pain, as well as through the modification of dorsal ganglia 8). However, allodynic pain is multifactorial, and as people suffering from post-thalamic stroke pain can attest, the crisscrossing of neurons can happen as high as in the cerebellum.

Visceral hypersensitivity is the most definitive and unifying theory explaining the pathophysiology of all functional gastrointestinal disorders 10). This theory is based on the strong association between the enteric nervous system and central nervous system (CNS) and their common embryonic origin 11). Patients with functional gastrointestinal disorders have a low threshold for nociceptive stimuli. A variety of ill-defined factors including genetic, environmental, psychosocial (early stressors in life) etc predispose an individual to visceral hyperalgesia. Postulated mechanisms for visceral hyperalgesia include sensitization of primary sensory neurons and central spinal neurons, altered descending inhibitory control, and impaired stress response. This in turn causes alteration of bowel–gut axis and causes abnormal secretion of excitatory neurotransmitters such as serotonin. Serotonin plays a key role in the regulation of gastrointestinal (GI) motility, secretion, and sensation. The bidirectional communication between the brain–gut neurons through various neural and hormonal circuits may lead to changes in the CNS and cause other associated symptoms such as headache. Stimulation of the autonomic nervous system and sympathetic hyperactivity may account for symptoms such as pallor. Novel imaging techniques such as functional magnetic resonance imaging have shown defective visceral pain processing pathways in patients with functional gastrointestinal disorder.

Although, the theory of visceral hyperalgesia has not been specifically proven in patients with abdominal migraine, it is the most evidence-based explanation for all functional gastrointestinal disorders 12). A 2017 study found evidence suggesting Y2 receptor antagonism and YY gene deletion may be related to visceral hyperalgesia 13). The contribution of genetic factors to abdominal migraine is further supported by the presence of family history of migraine or chronic abdominal pain in most of the patients 14). However, more research is needed to identify these factors.

Opioids are a class of drugs commonly used to treat moderate to severe pain. They can be used over prolonged periods to relieve chronic pain. Opioid induced hyperalgesia is a clinical picture which involves increasing pain in patients who are receiving increasing doses of opioids. Opioids are substances such as opium, morphine, heroin, codeine and methadone.

During opioid treatment of pain, a decline in analgesic efficacy has traditionally been thought to result from the development of pharmacological tolerance (or disease progression), best overcome by dose escalation. More recently, it has been recognized that opioids can also activate a pronociceptive mechanism resulting in heightened pain sensitivity or opioid-induced hyperalgesia 18). Although hyperalgesia had previously been observed during opioid withdrawal, new evidence suggests that increased pain sensitivity can also occur during opioid administration, in the absence of an overt, precipitated withdrawal. This paradoxical opioid-induced pain sensitivity may contribute to reduced opioid analgesic efficacy. Therefore, it is possible that a decrease in opioid analgesic efficacy may be a result of opioid induced hyperalgesia (a pronociceptive mechanism), not simply of pharmacological tolerance. Both a sensitization and a desensitization process are taking place.

Opioid-induced hyperalgesia is mediated through distinct cellular mechanisms, including endogenous dynorphin, the glutamatergic system, and descending
facilitation 19). Interestingly, the cellular mechanisms of opioid induced hyperalgesia have much in common with those of neuropathic pain and opioid tolerance 20). For example, both peripheral nerve injury and repeated opioid administration can activate a similar cellular pathway involving activation of the central glutamatergic system 21). NMDA antagonists such as ketamine have been used clinically to reverse the glutamatergic component of pain sensitivity.

Doctors may consider this condition in patients who have a history of;

When the doctor is examining you, some of the following signs may be found. On examination, you may complain of pain from non-painful stimuli, such as soft touching of the skin with cotton wool.

There may be increased activity in your nervous system. These signs include;

Research has shown that opioid induced hyperalgesia is a significant consequence of taking opioid medications. If you are taking such medications and are experiencing increasing pain, the use of alternative pain killers and stopping opioids may need to be considered.

In most cases, the first step is to look at reducing or discontinuing the current opioid. Alternatively, the doctor can look at changing your opioid to one with less risk of toxic effects to your nervous system: e.g., – fentanyl or methadone.

Low doses of drugs which have an opposing mechanism of action to opioids (called opioid antagonists), or specific NMDA (N-methyl-D-aspartate; a special amino acid implicated in opioid sensitivity) antagonists (such as ketamine) may be appropriate in some cases. Your doctor will be able to provide you with more information about this.

High levels of water intake is also recommended for your well-being.