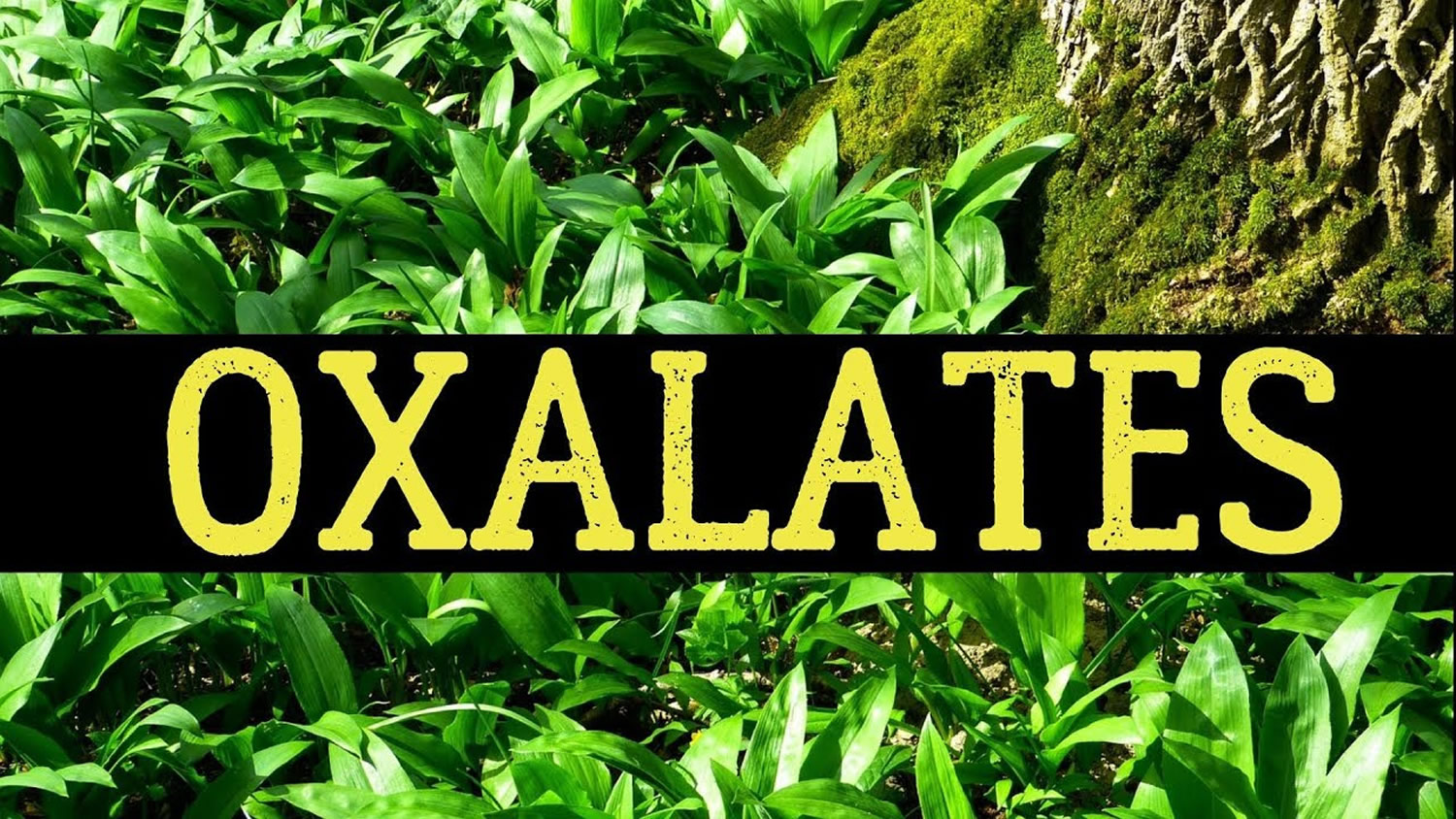 Oxalate in the mammalian body originates from two main sources: endogenous (body in your liver) production and external source via dietary intake. The ratio between liver-generated and absorption-related sources depends on oxalate content in ingested food. Both sources have a potentially important role in increasing oxalate concentrations in plasma and urine. Oxalate is a toxic simple organic acid that is ubiquitous in the plant kingdom and widely consumed in normal human diets as a component of fruits, vegetables, grains and nuts 1). The normal daily intake of oxalate ranges from 70 to 920 mg, but strongly increases in vegetarians 2). The average daily dietary oxalate intake content in the United States is 214 mg in men, 185 mg in older women, and 183 mg in younger women; spinach accounts for > 40% of the oxalate intake 3). Despite the toxicity of oxalate to mammals, it cannot be degraded by mammalian enzymes 4). However, it can be metabolized by many gut bacteria, such as Oxalobacter formigenes and Lactobacillus acidophilus, among others 5). 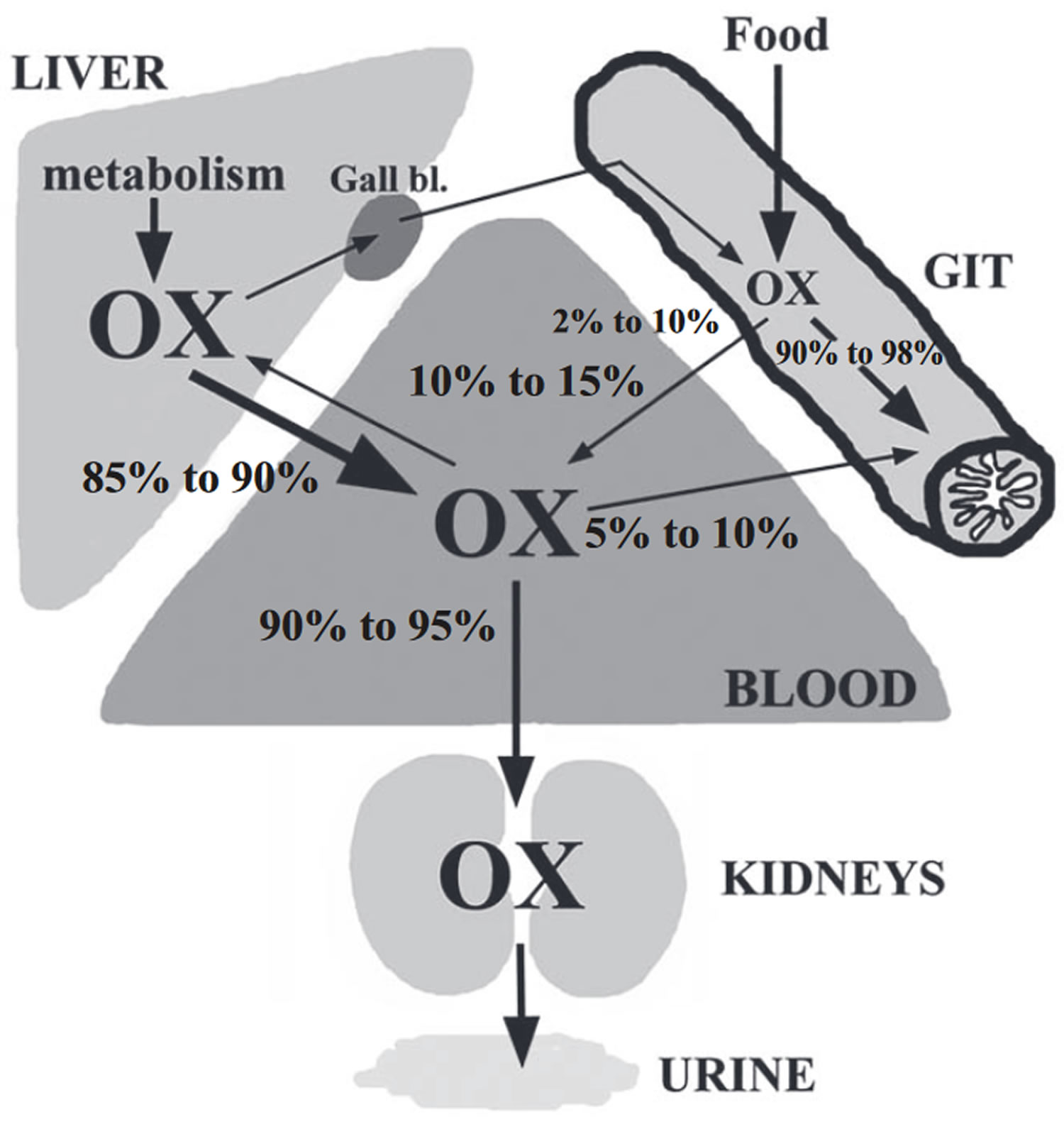 Factors leading to high rates of oxalate absorption from the gut include the presence of medical conditions or surgical interventions leading to steatorrhea, low dietary content in calcium and magnesium, both of which bind oxalate in the gastrointestinal tract and decrease its absorption and renal excretion, and the absence from the intestinal flora of certain species of bacteria, in particular, Oxalobacter formigenes, an anaerobic bacterium that metabolizes oxalate. The absence of this bacterium from the gut has been associated with hyperoxaluria, but bacteriotherapies involving oxalate-degrading bacteria have met with mixed results 7). While probiotics containing Oxalobacter formigenes, Lactobacillus spp., Bifidobacterium spp., or Enterococcus spp. effectively reduce urinary oxalate excretion, the bacteria and the oxalate-degrading function are often lost when probiotic use ceases and/or oxalate is removed from the diet 8). In some cases, urinary oxalate remains unchanged despite long-term administration of probiotics and persistence of oxalate-degrading microbes in the gut 9).

Oxalate is also natural chemical in your body. Oxalate is produced by many kinds of cells, including liver cells, kidney, epithelial cells and apocrine cells, among others 10), 11). Most of body oxalate is a metabolic end-product generated largely in the liver and represents 85 % to 90 % of the total oxalate circulating in blood (endogenous oxalate). An unknown proportion of the liver-produced oxalate is removed via bile secretion. The remainder (10 % to 15 %) of blood oxalate (exogenous oxalate) originates from the absorption of food in the gastrointestinal tract. The bulk (90 % to 95 %) of circulating oxalate is ultimately excreted by the kidneys, whereas some 5 % to 10 % of blood oxalate is excreted in the terminal parts of the small intestine and colon. And too much oxalate in your urine can cause serious problems.

Hyperoxaluria is defined as excessive urinary oxalate excretion, which occurs when you have too much oxalate in your urine 12). Too much oxalate in your urine can cause serious problems when the excess oxalate combines with calcium in urine to form the most common type of kidney stone, a calcium oxalate stone and has been associated with acute or chronic kidney injury 13).

Hyperoxaluria develops as a consequence of either excessive endogenous oxalate production (primary hyperoxaluria) or excessive oxalate absorption from the gastrointestinal tract. The later can be associated with enteric hyperoxaluria from fat malabsorption, e.g., in patients with Roux-en-Y gastric bypass surgery 14), jejunoileal bypass surgery 15), Crohn’s disease 16), sprue 17) or taking medications such as orlistat that cause fat malabsorption 18). Other potential culprits for excessive oxalate absorption include either excessive dietary intake of oxalate or its substrate (vitamin C) or dietary deficiency of calcium or magnesium 19).

Although there is substantial variation between individuals, urinary oxalate excretion rises in parallel with dietary oxalate intake when other variables potentially affecting oxaluria are under control 20). Chronic intake of food items with a high content of oxalate may lead to hyperoxaluria with urinary oxalate excretion similar to the degree usually seen in primary hyperoxaluria. The component of urinary oxalate excretion that is derived from gastrointestinal absorption is determined by the oxalate content of the diet and the rate of absorption of oxalate in the intestines. Food items high in oxalate include leafy vegetables, such as spinach, various nuts, e.g., peanuts, and tropical fruits, including Averrhoa carambola (starfruit) and Averrhoa bilimbi (commonly known as bilimbi or cucumber tree) 21).

The proportion of urinary oxalate that is derived from dietary oxalate is estimated to range from 10 to 50% 22). In addition to oxalate intake, intake of oxalate precursors may cause hyperoxaluria. Vitamin C (ascorbic acid), pyridoxylate, which is a combination of glyoxylic acid and pyridoxine, and hydroxyproline are potential sources of oxalate that have caused hyperoxaluric renal disease in clinical and experimental studies. Furthermore, hyperoxaluria and oxalate nephropathy may develop as a result of the oxalate salts of parenteral medications. It is well established that a large proportion of urinary oxalate is derived from the endogenous metabolism of glycine, glycolate, hydroxyproline, and dietary vitamin C 23). A recent metabolic study compared a controlled diet with 25% of protein from gelatin (2.75 g of hydroxyproline) with the same diet except with 25% of protein from whey (containing no hydroxyproline) 24). The diet that was high in hydroxyproline increased urinary oxalate excretion by 42%. Another metabolic trial demonstrated that 1000 mg of supplemental vitamin C consumed twice daily increased urinary oxalate excretion by 20 to 33% 25).

A review of oxalate load studies indicates that a peak in urinary oxalate excretion normally occurs two to four hours after the oxalate ingestion 26). Thus, it is quite possible that such transient oxalate loads on the kidney result in a transient hyperoxaluria. Interestingly, Gambaro et al have noted that the fractional excretion of oxalate was 70% higher in stone formers compared with normal individuals 27). It is plausible that a transient renal oxalate load on the kidney associated with an oxalate-rich meal might lead to renal cell injury, most likely in the proximal tubule. This may be amplified in stone formers due to an enhanced oxalate secretion and an elevated intestinal absorption 28). It has been established that oxalate can affect renal cells by either stimulating cellular proliferation or by inducing cell injury 29).

Calcium stones, including calcium oxalate stones ~ 70% and calcium phosphate stones ~ 15%, are the most common types of kidney stones. Calcium oxalate is also associated with benign breast tissue calcifications 30). Furthermore, a low-calcium diet was shown to be a significant risk factor for the kidney stones (calcium oxalate stones) disease 31). The explanation for the role of dietary calcium was that it complexed intestinal oxalate and limited its availability for absorption 32). In a study 33), a 34% increase in urinary oxalate excretion accompanied the decrease in calcium intake from 1002 mg to 391 mg per day, which is consistent with this theory. The studies of Liebman and Chai also support this role for dietary calcium in showing that supplemental calcium decreased the absorption of an oxalate load by more than 50% 34). Other observational studies have shown an inverse relation between dietary calcium and the risk for incident kidney stones 35), 36) suggested that dietary calcium may bind to oxalate in the gut, thereby limiting intestinal oxalate absorption (and subsequent urinary oxalate excretion). Indeed, the inhibitory effect of calcium ingestion on urinary oxalate excretion has been demonstrated in oxalate loading studies 37). Magnesium intake may also decrease urinary oxalate in a similar manner 38), 39).

Moreover, there is nearly universal agreement in studies of normal and stone-forming populations that the mean calcium excretion of the stone forming population is higher than that of the normal population, that the incidence of hypercalciuria (high urine calcium concentration) in the stone-forming population is 5 to 10 times above that in a normal population, and that the relative supersaturation of the urine is higher in hypercalciuric individuals than in normocalciuric individuals 40), 41). Differences in oxalate excretion are less pronounced, suggesting that if oxalate plays a role it may in part be due to effects other than by affecting relative supersaturation alone.

Currently, there are no established therapies that decrease urinary oxalate excretion in individuals with idiopathic calcium oxalate kidney stones disease. They are often advised, without substantial data to support the efficacy of this dietary recommendation, to avoid oxalate-rich foods 42).

Even though those food products are ubiquitous in many diets, there have been few reports of renal parenchymal disease secondary to dietary hyperoxaluria 46). Bakul et al have described a case series of 10 patients who developed acute renal failure after consumption of A. bilimbi fruit juice 47). Seven patients required hemodialysis while 3 cases recovered kidney function with conservative management. While their serum creatinine values at time of diagnosis ranged from 5.5 to 12.3 mg/dL, all 10 patients recovered within 2 to 6 weeks.

Table 1. Foods that contribute to oxalate

What is oxalate diet

Typical diets contain upward of 200 – 300 mg of oxalate. For stone prevention, a reasonable goal is below 100 mg of oxalate daily. An ideal would be about 50 mg daily if that can be accomplished.

To get there, consider the oxalate contents in common serving portions of all of the foods, and make up a plan for yourself. For further help, we suggest discussing your diet with either your physician or a registered dietician.

Existing data on the oxalate content of food are conflicting, making it hard to know what foods can be included in a low oxalate diet. The Harvard School of Public Health maintains a database of foods analyzed for oxalate content 51).