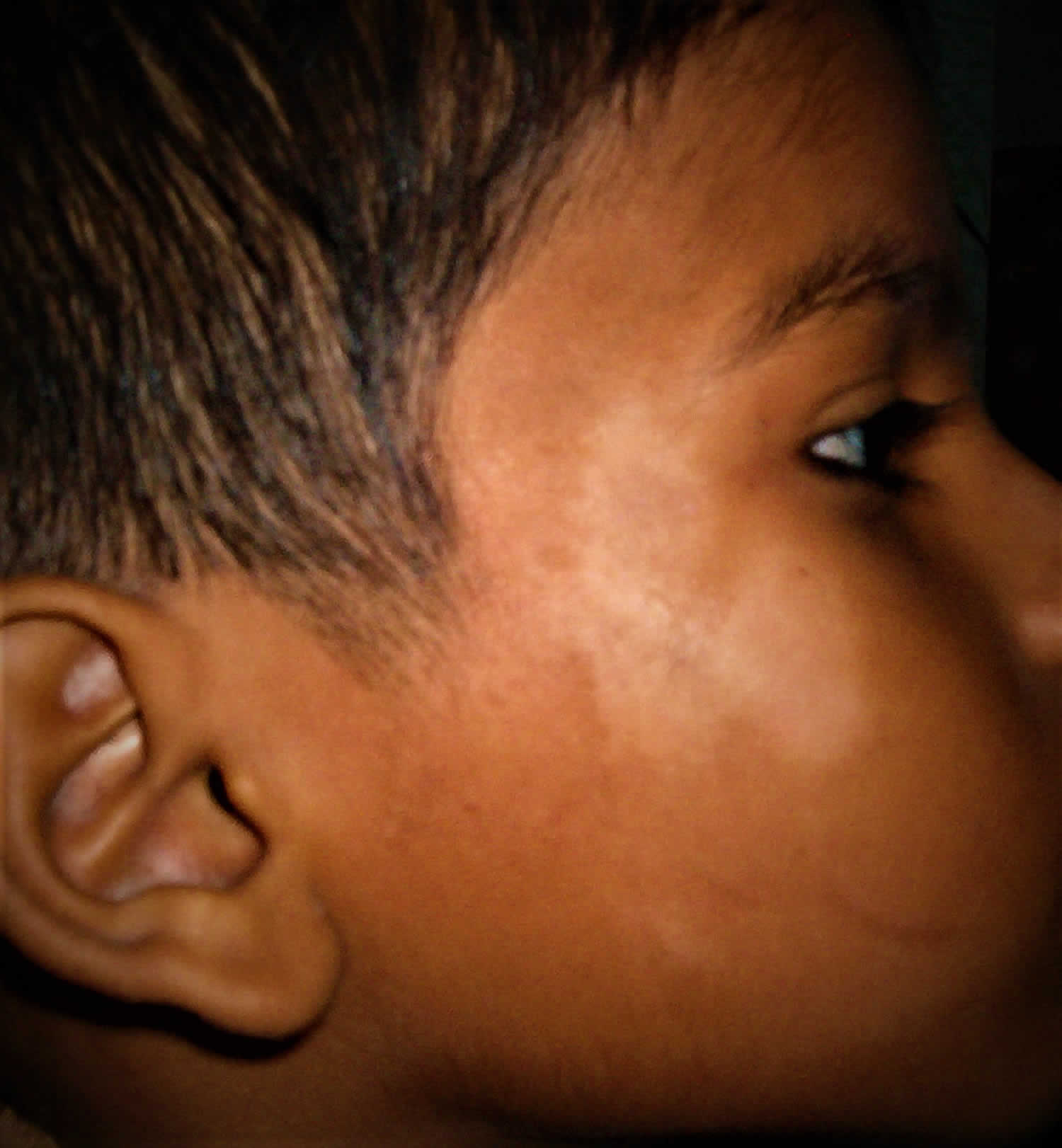 What is pityriasis alba

Pityriasis alba is a low-grade type of eczema or dermatitis that mostly affects children aged 3–16, with 90% of cases occurring in children younger than 12 years 1). An estimated 5% of children in the United States may be affected. Studies have demonstrated a higher prevalence in Egypt (18%) and Mali (20%) 2). The name refers to its appearance: pityriasis refers to its characteristic fine scale, and alba to its pale color (hypopigmentation). The patches are often found on the cheeks and upper arms and are more noticeable in darker skinned children. Pityriasis alba is generally asymptomatic.

Pityriasis alba is common worldwide with a prevalence in children of around 5%.

Pityriasis alba looks like scaly or flaky patches that are lighter than the surrounding skin, and the affected areas usually occur on the face or cheeks. Pityriasis alba can be bothersome because of its appearance, but the condition is not a serious one.

The cause of pityriasis alba is not well known, but it does seem to be more common in children and teens who also have allergies or asthma, so the things that trigger these other conditions may also trigger pityriasis alba. Most people also notice that the condition is more severe in the summertime; this may be because it is more noticeable in the summer as the surrounding skin becomes tan. The development or prominence of pityriasis alba can be reduced by avoiding exposure to sunlight.

There is no certain treatment for pityriasis; it usually goes away on its own within a year or in some cases persists for up to two or three years. Your skin color will gradually return completely to normal.

No treatment is necessary for asymptomatic pityriasis alba.

Pityriasis alba is not contagious.

Can pityriasis alba be cured?

Pityriasis alba usually resolves spontaneously, and the skin color gradually returns back to normal with no scarring. However, it may persist for a few years, and may come and go during this period, particularly in summer when the patches become prominent due to the tanning of non-affected skin.

What are the clinical features of pityriasis alba?

Typically, each area of pityriasis alba goes through several stages. 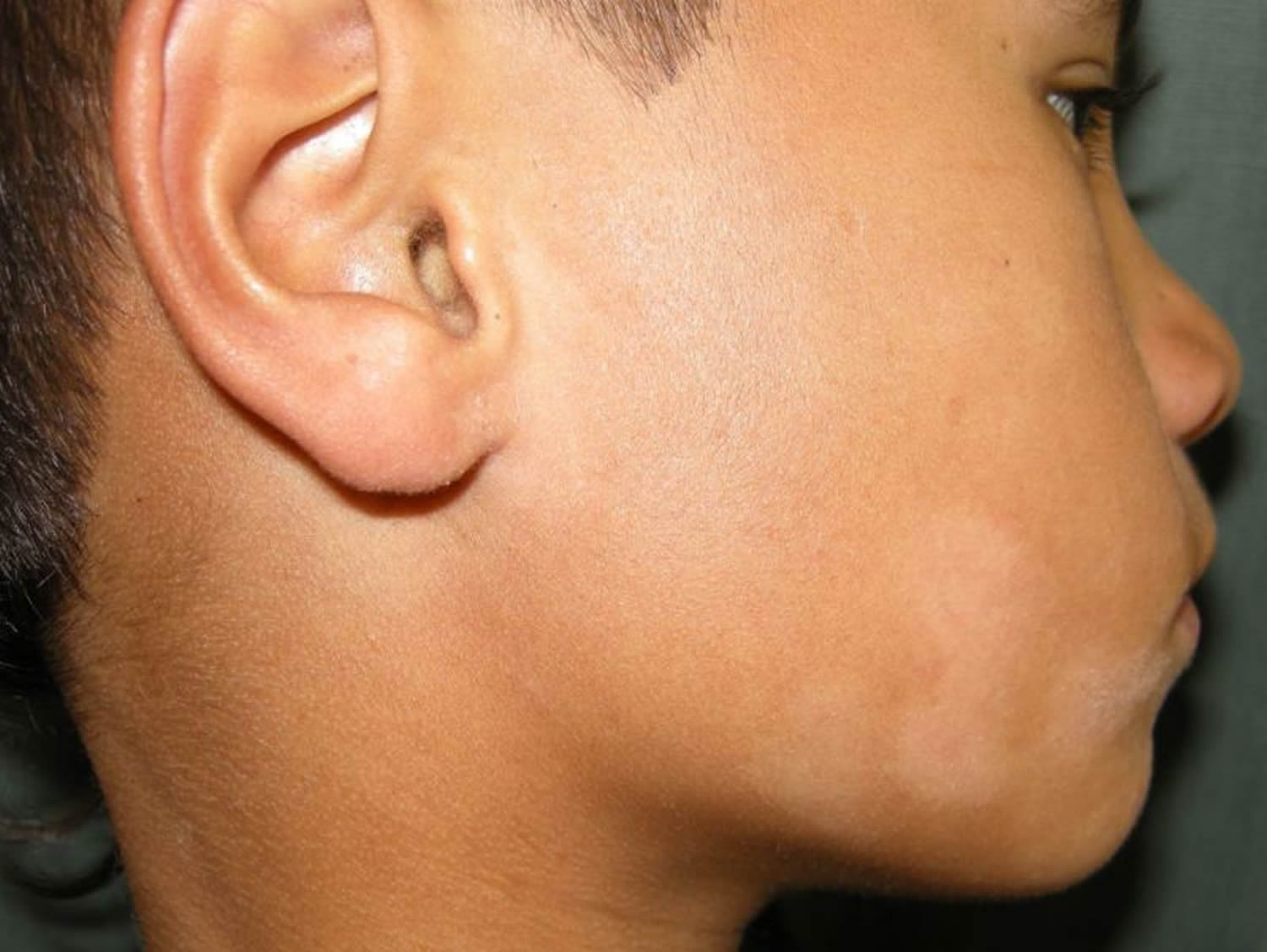 The cause of pityriasis alba is unknown.

Researchers have not reached any conclusions about the relationship of pityriasis alba to the following:

After some weeks or months the dry surface resolves leaving a smooth pale patch, which slowly disppears over a year or so.

The differential diagnosis of pale dry patches on the face or limb of a child includes:

In the proper geographic and clinical setting, the diagnosis of leprosy also should be considered.

The most common locations for pityriasis alba include:

People often think that pityriasis alba gets worse in the summer, but it just becomes more obvious as the normal surrounding skin becomes darker with sun exposure.

Pityriasis alba can be confused with several other disorders that cause hypopigmentation.

To exclude these, investigations may include:

Mycology is negative in pityriasis alba, but may be necessary to rule out a dermatophyte infection or pityriasis versicolor.

Skin biopsy is rarely necessary and may be reported as nonspecific dermatitis.

Patients and their parents can be reassured regarding the benign and self-limited nature of pityriasis alba. However, they also should be made aware that its slow resolution may take several months to a few years; although most cases resolve within one year.

No specific treatment is necessary in most children as the pityriasis alba patches are asymptomatic and resolve by themselves.

A trial of mild topical steroid (1% hydrocortisone cream or ointment) is sometimes warranted for a couple of weeks. It can be expected to reduce the redness, scaling and itch (if present). Long term, a moisturizer may prove as effective. Mild emollients, such as petroleum jelly and Eucerin cream, may reduce scaling.

Calcineurin inhibitors, pimecrolimus cream and tacrolimus ointment, may be as effective as hydrocortisone and have been reported to speed recovery of skin color.

Treatment with topical calcineurin inhibitors, such as 0.1% tacrolimus ointment and 1% pimecrolimus cream, have also been reported to be effective; however, because of their high cost, they are seldom indicated. Calcitriol, a topical vitamin D analog, showed comparable efficacy compared with tacrolimus. Other treatment options, usually reserved for extensive cases, include psoralen plus ultraviolet-A (PUVA) photochemotherapy and targeted phototherapy with a 308-nm excimer laser.

Sunscreens may be useful to reduce tanning of surrounding skin.

If you suspect that you have pityriasis alba, the most important self-care measure is to keep the skin well moisturized. Try the following:

See your doctor for evaluation if the condition does not improve with self-care measures, if it seems to be getting worse, or if it spreads to other areas.