What is the sensory nervous system

The sensory systems keep the central nervous system (the brain and the spinal cord) informed of changes in the external and internal environments. The sensory information is integrated and processed by interneurons in the spinal cord and brain. Responses to the integrative decisions are brought about by motor activities (muscular contractions and glandular secretions). The cerebral cortex, the outer part of the brain, plays a major role in controlling precise voluntary muscular movements. Other brain regions provide important integration for regulation of automatic movements.

Within the sensory division of the peripheral nervous system (PNS), sensory inputs are differentiated as general (widespread) or special (localized, i.e., the special senses).

Sensory receptor. The distal end of a sensory neuron (dendrite) or an associated sensory structure serves as a sensory receptor. It responds to a specific stimulus—a change in the internal or external environment—by producing a graded potential called a generator (or receptor) potential. If a generator potential reaches the threshold level of depolarization, it will trigger one or more nerve impulses in the sensory neuron. 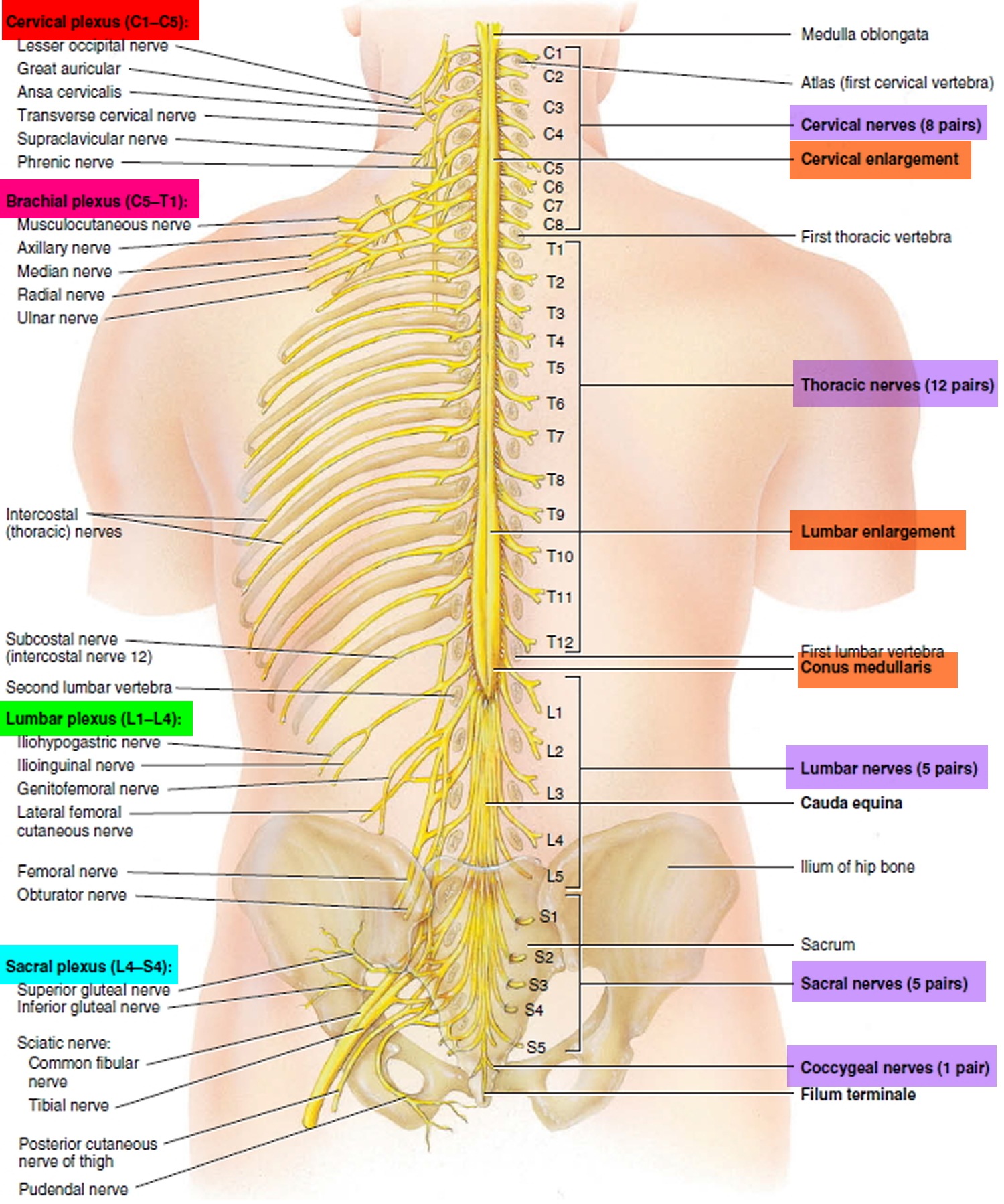 Figure 2. Processing of sensory input and motor output by the spinal cord 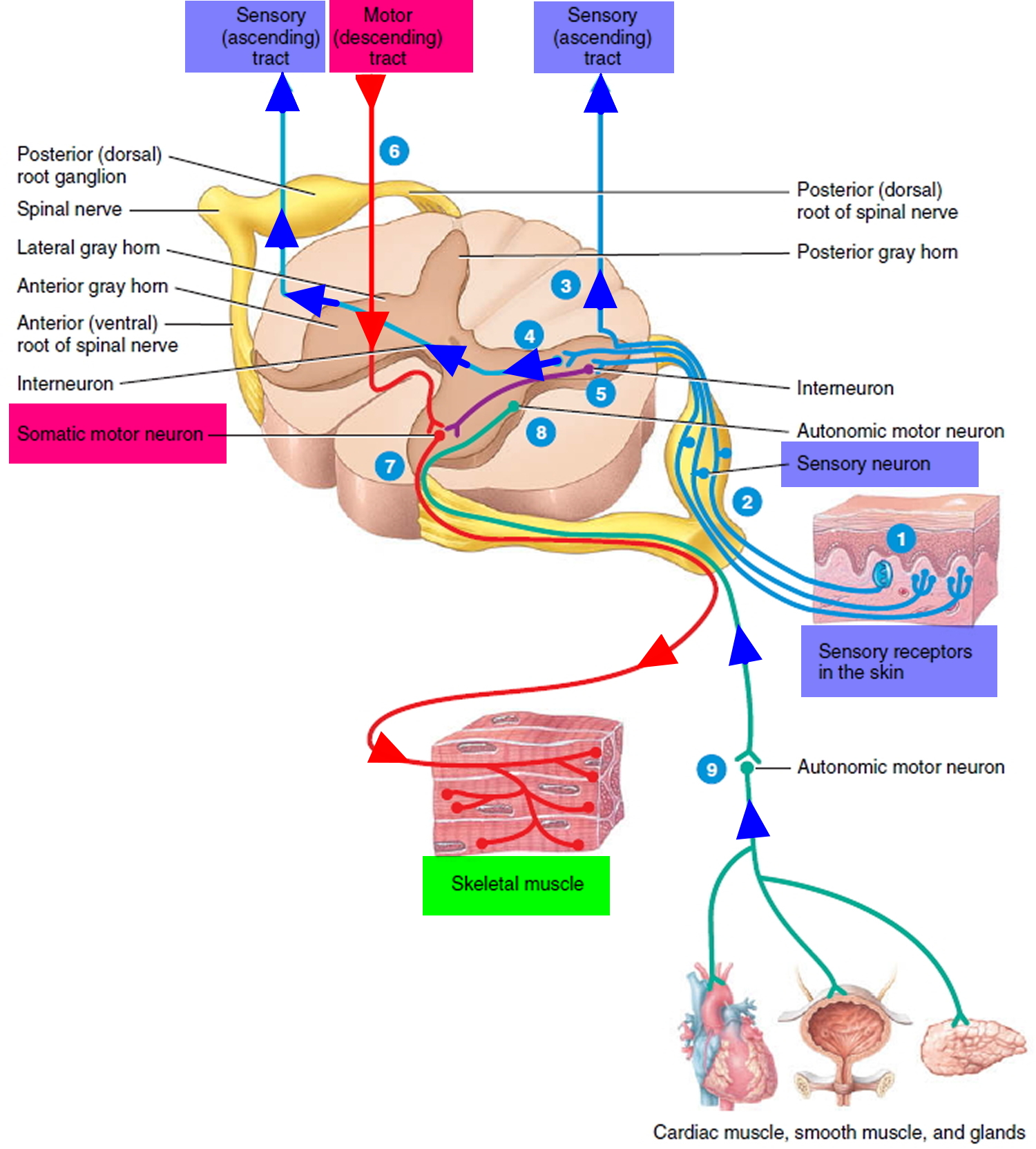 Ascending tracts carry sensory signals up the spinal cord. Sensory signals typically travel across three neurons from their origin in the receptors to their destination in the brain: a first-order neuron that detects a stimulus and transmits a signal to the spinal cord or brainstem; a second-order neuron that continues as far as a “gateway” called the thalamus at the upper end of the brainstem; and a third-order neuron that carries the signal the rest of the way to the cerebral cortex. The axons of these neurons are called the first- through third-order nerve fibers. 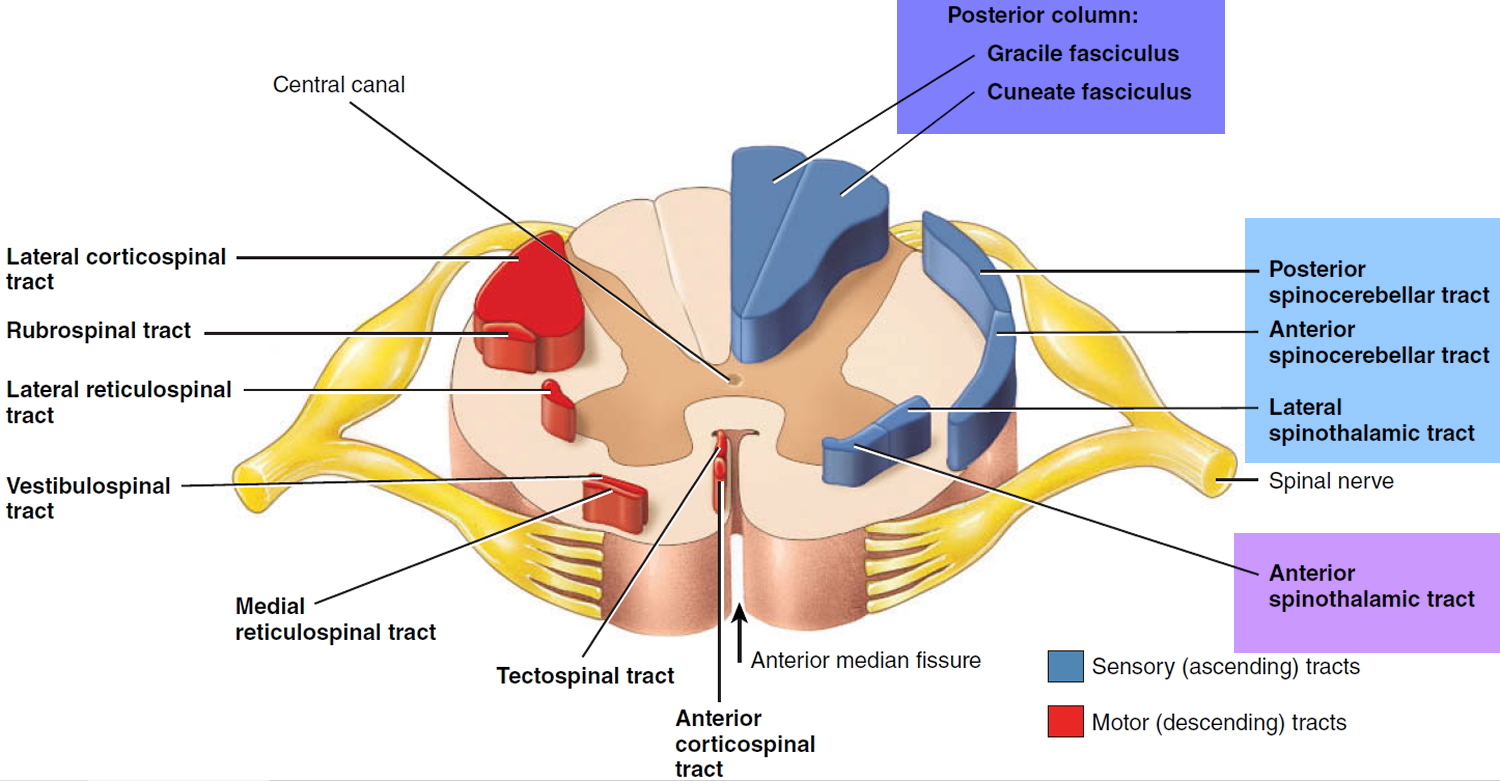 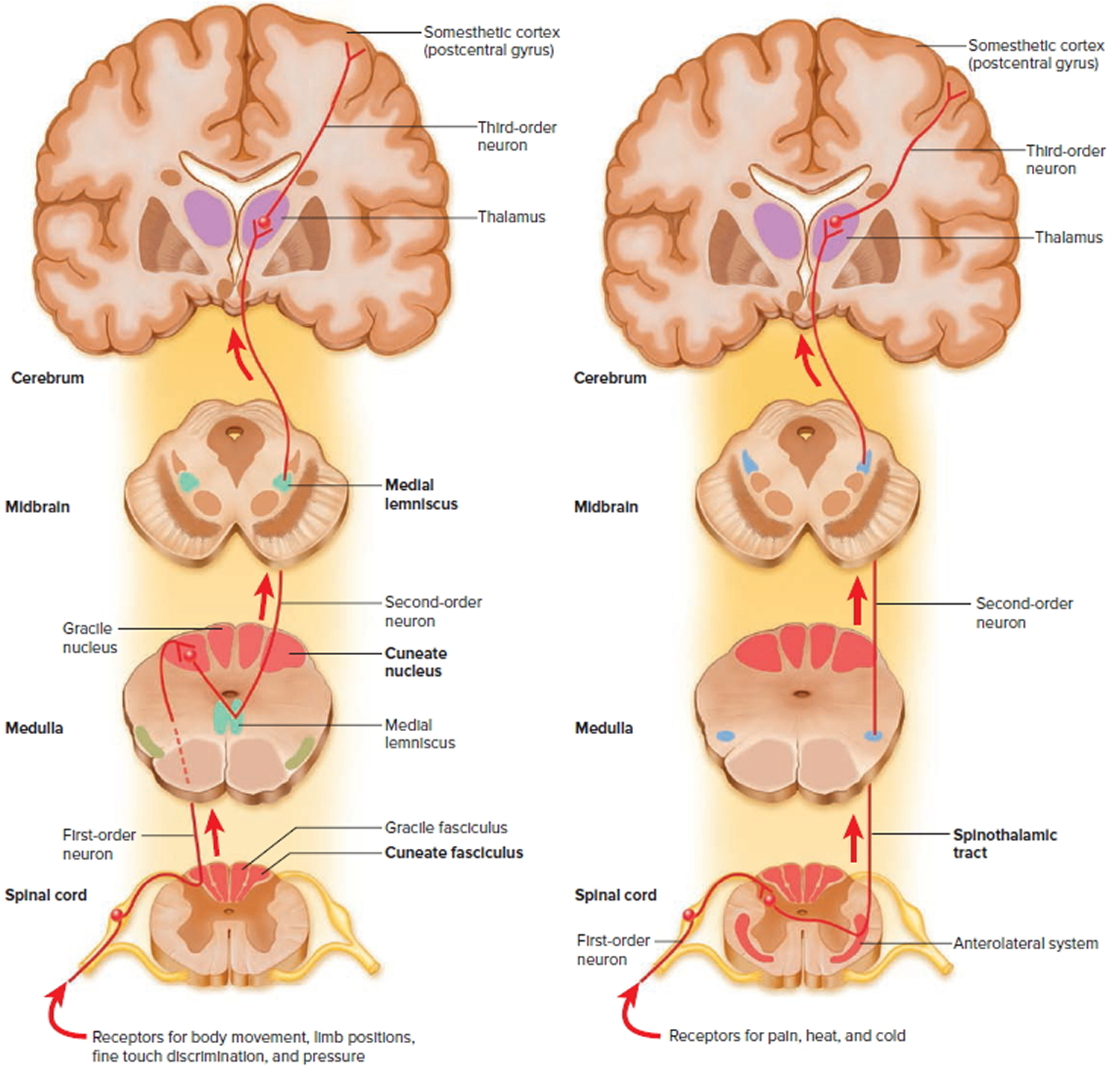 The major ascending tracts are as follows. The names of most of them consist of the prefix spino- followed by a root denoting the destination of its fibers in the brain, although this naming system does not apply to the first two.

The gracile fasciculus carries signals from the midthoracic and lower parts of the body. Below vertebra T6, it composes the entire posterior column. At T6, it is joined by the cuneate fasciculus, discussed next. It consists of first-order nerve fibers that travel up the ipsilateral side of the spinal cord and terminate at the gracile nucleus in the medulla oblongata of the brainstem. These fibers carry signals for vibration, visceral pain, deep and discriminative touch (touch whose location one can precisely identify), and especially proprioception from the lower limbs and lower trunk. Proprioception is the nonvisual sense of the position and movements of the body.

The cuneate fasciculus joins the gracile fasciculus at the T6 level. It occupies the lateral portion of the posterior column and forces the gracile fasciculus medially. It carries the same type of sensory signals, originating from T6 and up (from the upper limbs and chest). Its fibers end in the cuneate nucleus on the ipsilateral side of the medulla oblongata. In the medulla, second-order fibers of the gracile and cuneate systems decussate and form the medial lemniscus, a tract of nerve fibers that leads the rest of the way up the brainstem to the thalamus. Third-order fibers go from the thalamus to the cerebral cortex. Because of decussation, the signals carried by the gracile and cuneate fasciculi ultimately go to the contralateral cerebral hemisphere.

The spinothalamic tract and some smaller tracts form the anterolateral system, which passes up the anterior and lateral columns of the spinal cord. The spinothalamic tract carries signals for pain, temperature, pressure, tickle, itch, and light or crude touch. Light touch is the sensation produced by stroking hairless skin with a feather or cotton wisp, without indenting the skin; crude touch is touch whose location one can only vaguely identify.

In this pathway, first-order neurons end in the posterior horn of the spinal cord near the point of entry. Here they synapse with second-order neurons, which decussate and form the contralateral ascending spinothalamic tract. These fibers lead all the way to the thalamus. Third-order neurons continue from there to the cerebral cortex. Because of decussation, sensory signals in this tract arrive in the cerebral hemisphere contralateral to their point of origin.

The spinoreticular tract also travels up the anterolateral system. It carries pain signals resulting from tissue injury. The first-order sensory neurons enter the posterior horn and immediately synapse with second-order neurons. These decussate to the opposite anterolateral system, ascend the cord, and end in a loosely organized core of gray matter called the reticular formation in the medulla and pons. Third-order neurons continue from the pons to the thalamus, and fourth-order neurons complete the path from there to the cerebral cortex.

The posterior and anterior spinocerebellar tracts travel through the lateral column and carry proprioceptive signals from the limbs and trunk to the cerebellum at the rear of the brain. Their first-order neurons originate in muscles and tendons and end in the posterior horn of the spinal cord. Second-order neurons send  their fibers up the spinocerebellar tracts and end in the cerebellum.

Figure 5. Rami of the spinal nerve 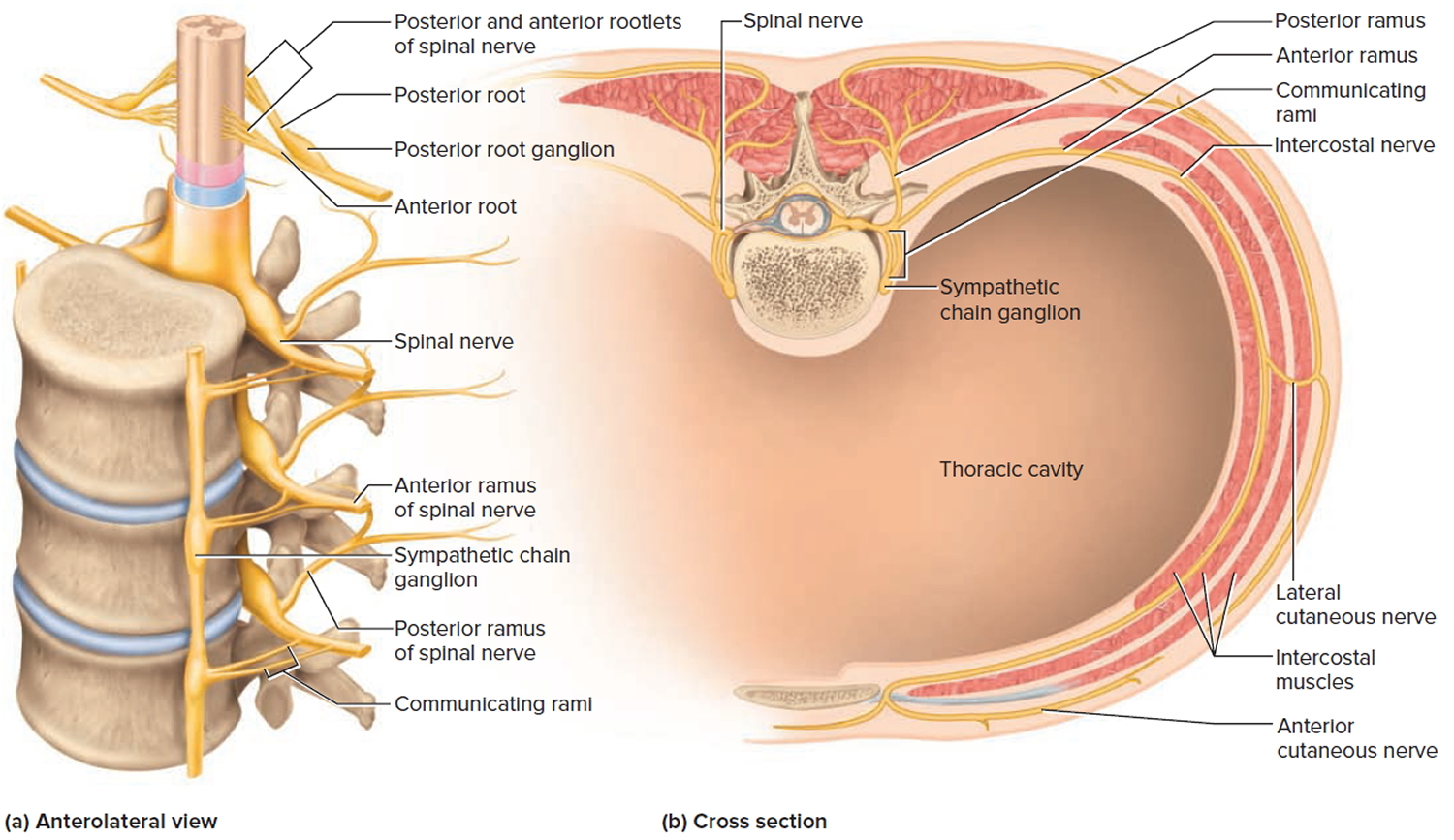 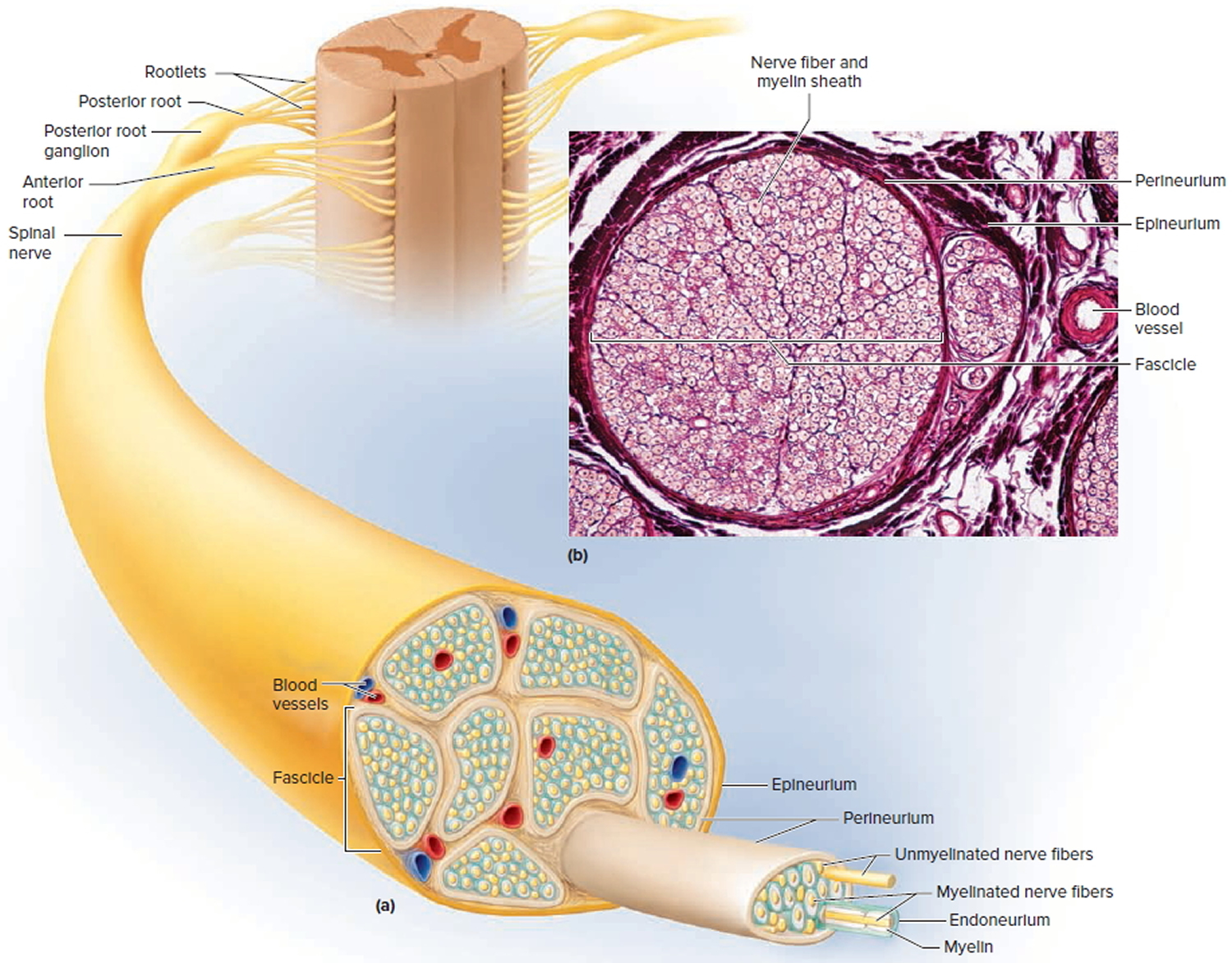 Peripheral sensory receptors are structures that pick up sensory stimuli and then initiate signals in the sensory axons. Most receptors fit into two main categories:

Sensory receptors may be categorized based on either function or structure. 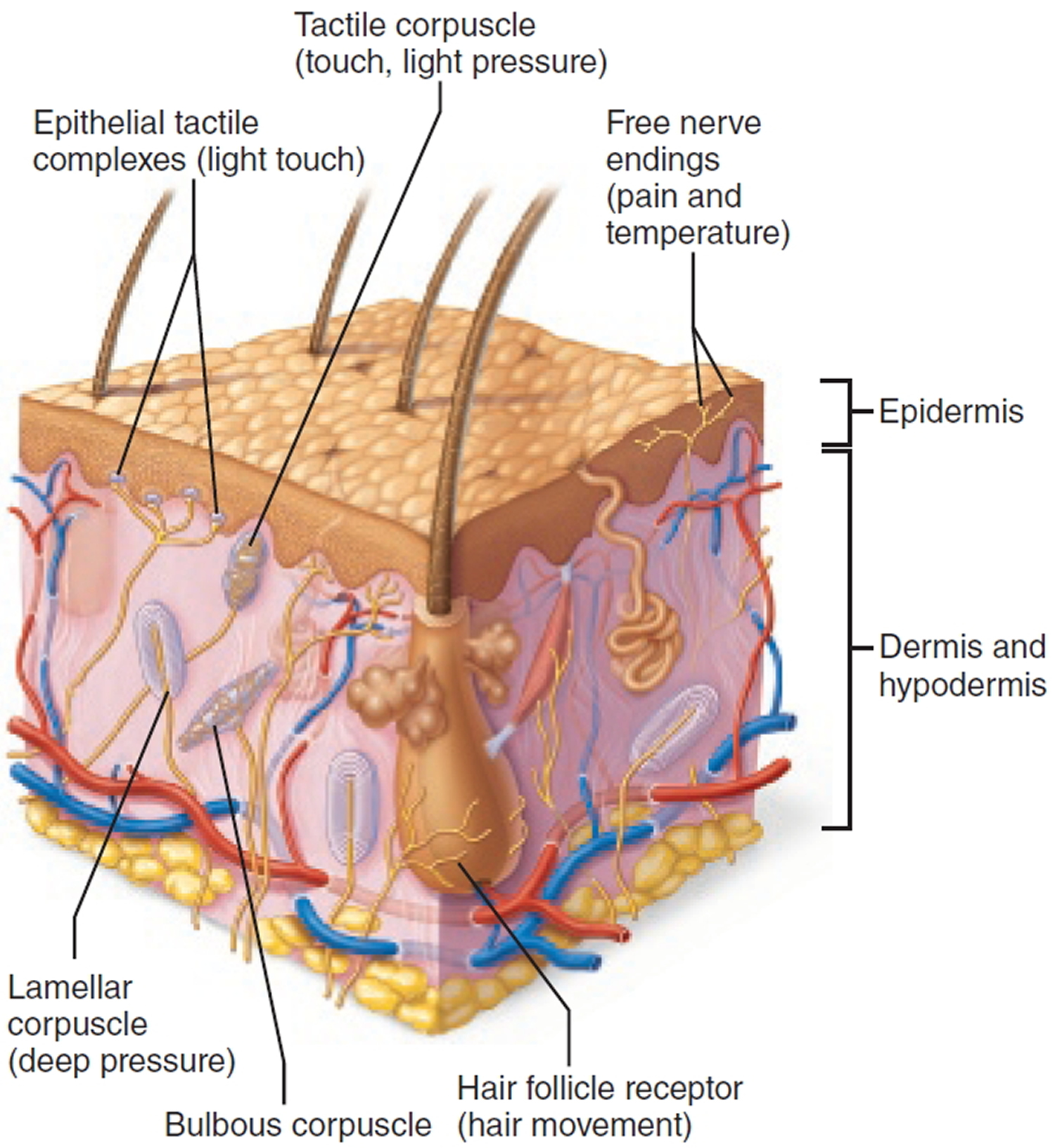 Functional classifications group receptors according to their location or the type of stimulus they detect.

Sensory receptors monitor many types of stimuli. The type of stimulus that most readily activates a sensory receptor can be used to categorize it functionally.

This section considers only the general sensory receptors. All these widely distributed receptors are nerve endings of sensory neurons that monitor touch, pressure, vibration, stretch, pain, temperature, and proprioception.

It is important to remember that there is no one to-one correspondence between structural type and stimulus detected. Each type of receptor can respond to several different kinds of stimuli. In addition, similar stimuli can activate different types of receptors.

Free nerve endings of sensory neurons invade almost all tissues of the body but are particularly abundant in epithelia and in the connective tissue that underlies epithelia. These receptors are primarily nociceptors and thermoreceptors, responding to pain and temperature (though some respond to tissue movements caused by pressure). One way to characterize free nerve endings functionally is to say that they monitor the affective senses, those to which people have an emotional response—and people certainly respond emotionally to pain!

Itch receptors consist of free nerve endings in the dermis. Itch receptors are activated by chemicals present at inflamed sites, such as histamine.

Certain free nerve endings contribute to epithelial tactile complexes (Merkel discs), which lie in the epidermis of the skin. Each consists of a disc-shaped tactile epithelial cell innervated by a sensory nerve ending. These complexes are slowly adapting mechanoreceptors for light touch; that is, they continue to respond and send out action potentials even after a long period of continual stimulation.

Hair follicle receptors, free nerve endings that wrap around hair follicles, are mechanoreceptors for light touch that monitor the bending of hairs. Unlike epithelial tactile complexes, they are rapidly adapting, meaning that the sensation disappears quickly even if the stimulus is maintained. The tickle of a mosquito landing on your forearm is mediated by hair follicle receptors.

All encapsulated nerve endings consist of one or more end fibers of sensory neurons enclosed in a capsule of connective tissue. All seem to be mechanoreceptors, and their capsules serve either to amplify the stimulus or to filter out the wrong types of stimuli. Encapsulated receptors vary widely in shape, size, and distribution in the body. The main types are tactile (Meissner’s) corpuscles, lamellar (Pacinian) corpuscles, bulbous corpuscles (Ruffini endings) and proprioceptors.

In a tactile corpuscle (Meissner’s corpuscle), a few spiraling nerve endings are surrounded by Schwann cells, which in turn are surrounded by an eggshaped capsule of connective tissue. These corpuscles, which occur in the dermal papillae beneath the epidermis, are rapidly adapting receptors for fine, discriminative touch. They mainly occur in sensitive and hairless areas of the skin, such as the soles, palms, fingertips, nipples, and lips. Tactile corpuscles perform the same “light touch” function in hairless skin that hair follicle receptors perform in hairy skin.

Scattered throughout the deep connective tissues of the body are lamellar corpuscles (Pacinian corpuscles). They occur, for example, in the hypodermis deep to the skin. Although they are sensitive to deep pressure, they respond only to the initial application of that pressure before they tire and stop firing. Therefore, lamellar corpuscles are rapidly adapting receptors that are best suited to monitor vibration, an on/off pressure stimulus.

These corpuscles are large enough to be visible to the unaided eye—about 0.5–1 mm wide and 1–2 mm long. In section, a lamellar corpuscle resembles a cut onion: Its single nerve ending is surrounded by up to 60 layers of flattened Schwann cells, which in turn are covered by a capsule of connective tissue.

Located in the dermis and elsewhere are bulbous corpuscles (Ruffini endings), which contain an array of nerve endings enclosed in a thin, flattened capsule. Like lamellar corpuscles, they respond to pressure and touch. However, they adapt slowly and thus can monitor continuous pressure placed on the skin. 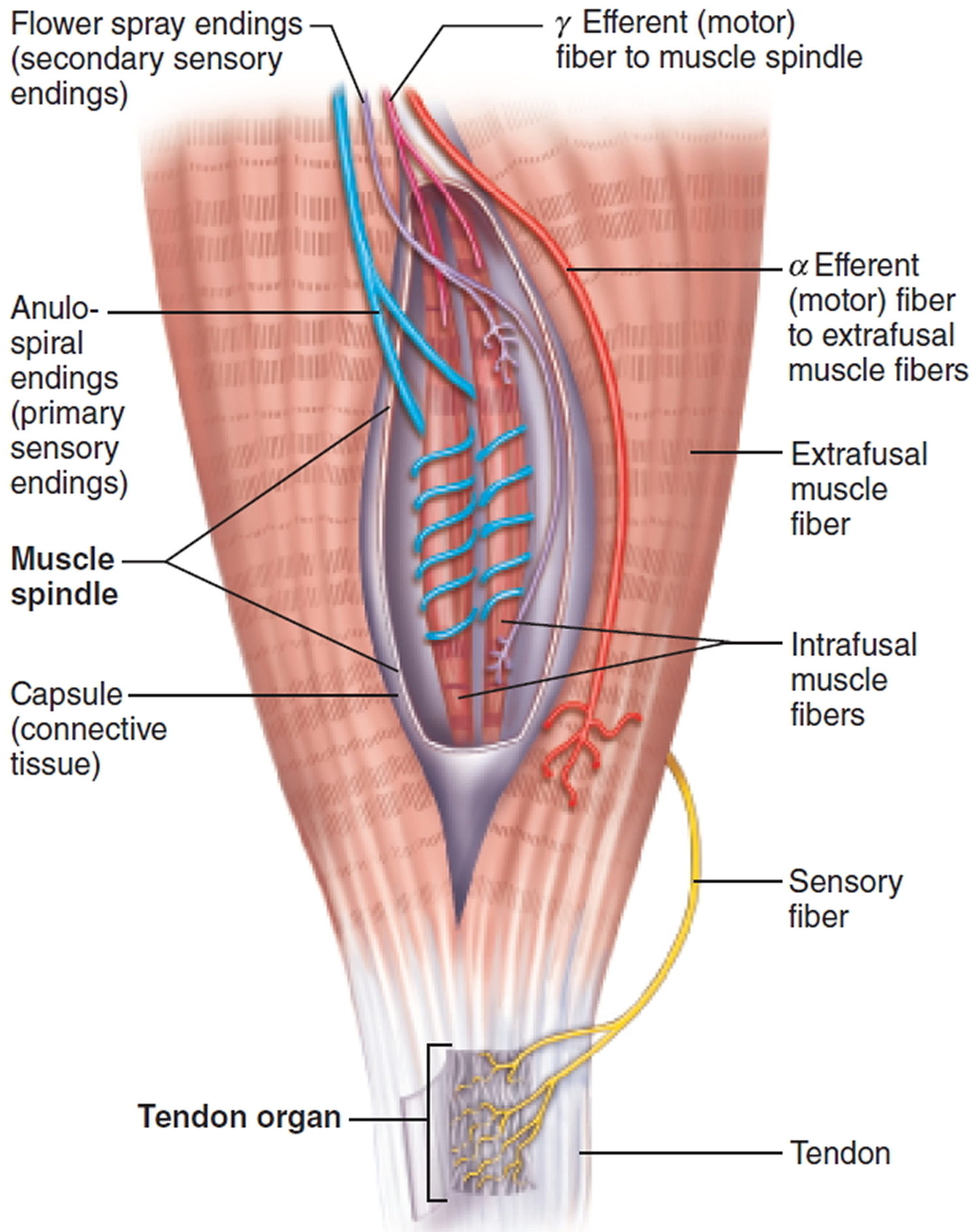 Muscle spindles (neuromuscular spindles) measure the changing length of a muscle as that muscle contracts and is stretched back to its original length. An average muscle contains some 50 to 100 muscle spindles, which are embedded in the perimysium between the fascicles. Structurally, each spindle contains several modified skeletal muscle fibers called intrafusal muscle fibers (intra = within; fusal = the spindle) surrounded by a connective tissue capsule.

Intrafusal muscle fibers have fewer striations than the extrafusal (extra = outside) muscle fibers, that is, the ordinary muscle cells outside the spindles. The intrafusal fibers are innervated by two types of sensory endings: Anulospiral endings, or primary sensory endings, twirl around the noncontractile middle of the intrafusal fibers innervating the spindle center. These receptors are stimulated by the rate and degree of stretch of the muscle spindle. Secondary sensory endings called flower spray endings, monitor the spindle ends (the only contractile parts of the spindle) and respond only to degree of stretch.

Muscles are stretched by the contraction of antagonist muscles and also by the movements that occur as a person begins to lose balance. The muscle spindles sense this lengthening in the following way:

Also innervating the intrafusal fibers of the muscle spindle are spinal motor neurons called G (gamma) efferent neurons. These neurons preset the sensitivity of the spindle to stretch. When the brain stimulates the gamma motor neurons to fire, the intrafusal muscle fibers contract and become tense so that very little stretch is needed to stimulate the sensory endings, making the spindles highly sensitive to applied stretch. Gamma motor neurons are most active when balance reflexes must be razor sharp, as for a gymnast on a balance beam or a rock climber on a vertical face.

Tendon organs (Golgi tendon organs) are proprioceptors located near the muscle-tendon junction, where they monitor tension within tendons. Each consists of an encapsulated bundle of tendon fibers (collagen fibers) within which sensory nerve endings are intertwined. When a contracting muscle pulls on its tendon, tendon organs are stimulated, and their sensory neurons send this information to the cerebellum. These receptors also induce a spinal reflex that both relaxes the contracting muscle and activates its antagonist. This relaxation reflex is important in motor activities that involve rapid alternation between flexion and extension, such as running.

Joint receptors, like the other two classes of proprioceptors, send information on body movements to the cerebellum and cerebrum, as well as to spinal reflex arcs. 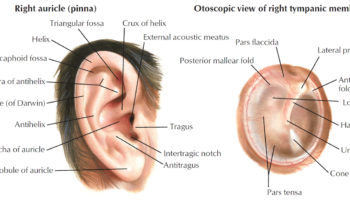 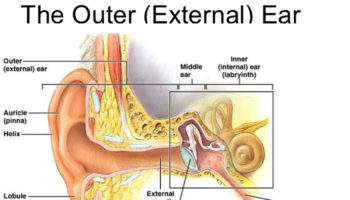