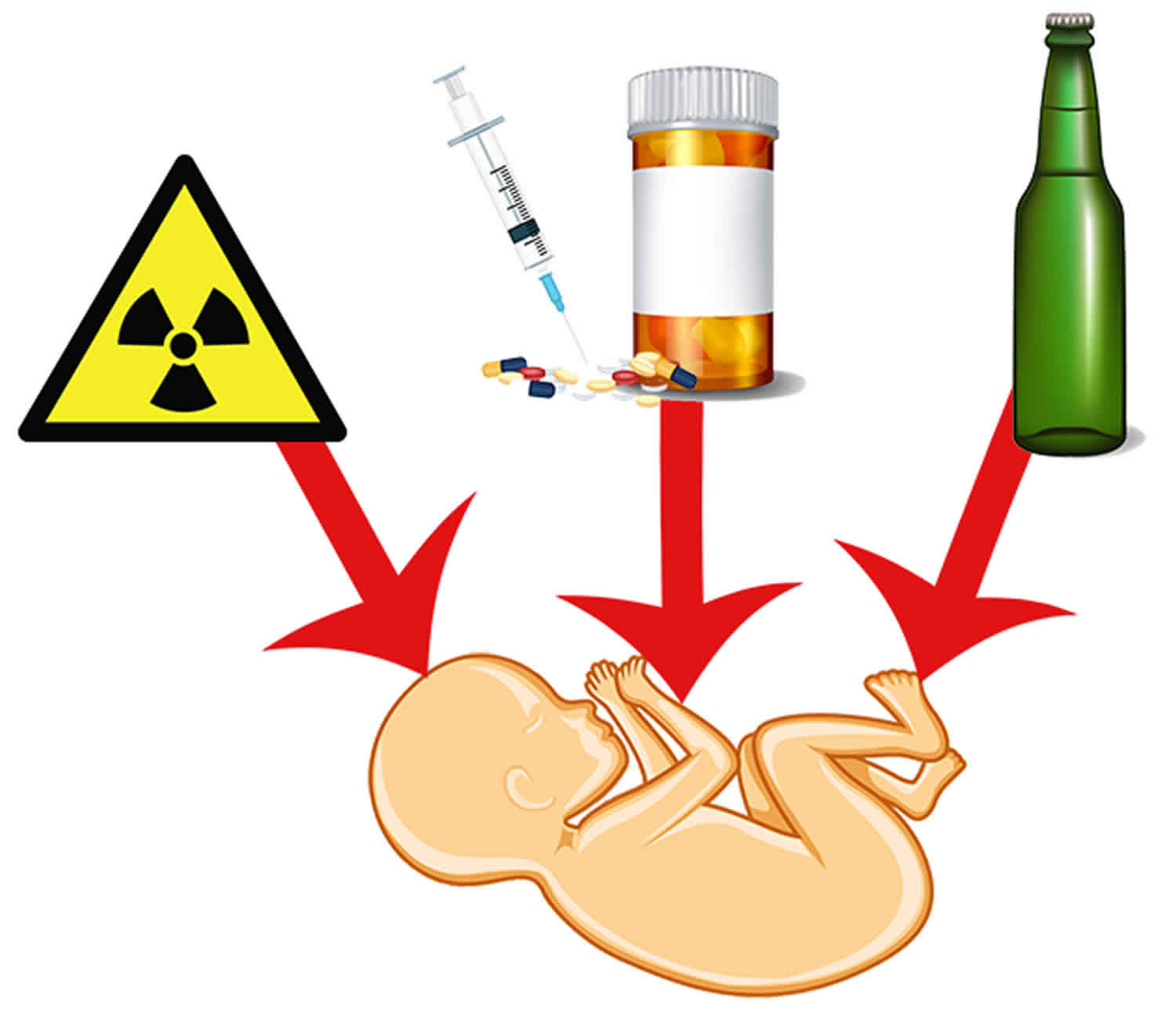 What is a teratogen

A teratogen is any agent that causes harmful fetal effect or birth defect following fetal exposure during pregnancy. Teratogens are usually discovered after an increased prevalence of a particular birth defect. For example, in the early 1960’s, a drug known as thalidomide was used to treat morning sickness. Exposure of the fetus during this early stage of development resulted in cases of phocomelia, a congenital malformation in which the hands and feet are attached to abbreviated arms and legs.

Teratogens can also be found at home or the workplace. The effect is related to type of agent, dose and duration and time of exposure. The first half of pregnancy is the most vulnerable. Teratogenic agents include infectious agents (rubella, cytomegalovirus, varicella, herpes simplex, toxoplasma, syphilis, etc.); physical agents (ionizing agents, hyperthermia); maternal health factors (diabetes, maternal PKU); environmental chemicals (organic mercury compounds, polychlorinated biphenyl or PCB, herbicides and industrial solvents); and drugs (prescription, over- the-counter, or recreational). In general, if medication is required, the lowest dose possible should be used and combination drug therapies and first trimester exposures should be avoided.

The types or severity of abnormalities caused by a teratogenic agent is also dependent on the genetic susceptibilities carried by the mother and fetus. For example, variation in maternal metabolism of a particular drug will determine what metabolites the fetus is exposed to and the duration of exposure. The genetic susceptibility of the fetus to a particular teratogenic agent will also have an effect on the final outcome.

Two of the leading preventable causes of birth defects and developmental disabilities are alcohol and smoking. Alcohol use in pregnancy has significant effects on the fetus and the baby. Alcohol can pass from the mother’s blood stream through the placenta to the fetus. Since alcohol is broken down more slowly in a fetus than in an adult, alcohol levels tend to remain high and stay in the baby’s body longer. Birth defects associated with prenatal exposure to alcohol can occur in the first three to eight weeks of pregnancy, before a woman even knows that she is pregnant.

Fetal alcohol syndrome is a group of abnormalities in babies born to mothers who consume alcohol during pregnancy. It is the most common known non-genetic (non-inherited) cause of mental retardation in the U.S.

In 2001, the estimated prevalence of smoking during pregnancy for all U.S. women was 11.4%, ranging from 3.9% in DC to 26.2% in West Virginia. Smoking nearly doubles a woman’s risk of having a low birth-weight baby as a result of poor growth before birth, preterm delivery or a combination of both. Premature and low birth-weight babies face an increased risk of serious health problems during the newborn period, chronic lifelong disabilities (e.g., cerebral palsy, mental retardation) and possibly death. More recent studies have suggested a possible link between prenatal smoking exposure and behavioral problems in later childhood and adolescence.

In addition, almost three percent of pregnant women use illicit drugs such as marijuana, cocaine, Ecstasy and other amphetamines, and heroin. These drugs can cause low birth-weight, withdrawal symptoms, birth defects, or learning or behavioral problems.

Fetal Alcohol Spectrum Disorder or FASD is a condition in a child that results when alcohol is consumed while pregnant. Alcohol in the mother’s blood passes to the baby through the umbilical cord. There is no known safe amount of alcohol during pregnancy or when trying to get pregnant. There is also no safe time to drink during pregnancy. Alcohol can cause problems for a developing baby throughout pregnancy, including before a woman knows she’s pregnant. All types of alcohol are equally harmful, including all wines and beer. To the fetus, alcohol is a behavioral teratogen. A behavioral teratogen is a substance that also causes behavioral problems. Fetal alcohol syndrome causes brain damage and growth problems. Although prenatal alcohol exposure presents a physical risk to the baby, it is the behavior that causes the family and the individual the most problems. It is important to remember that brain equals behavior. Many parts of the brain can be affected as can a variety of organs, depending on the time in pregnancy and amount of alcohol consumed and fetal alcohol syndrome are not reversible.

To prevent fetal alcohol spectrum disorders (FASDs), a woman should not drink alcohol while she is pregnant, or if there is a chance she might be pregnant.

If you suspect your child has fetal alcohol syndrome, talk to your doctor as soon as possible. Early diagnosis may help to reduce problems such as learning difficulties and behavioral issues.

The parts of the brain most commonly affected by alcohol are:

The most common physiological problems are:

In the United States, it has been estimated that each individual with fetal alcohol spectrum disorder will cost the government $2.9 million over his or her lifetime 1). In the report on The Financial Impact of fetal alcohol spectrum disorder, the SAMHSA FASD Center for Excellence stated that the United States has an annual birth rate of just fewer than 4 million 2), with 40,000 of those births alcohol affected. Extrapolated to Australia’s population, this rate suggests that each year a minimum of 3,000 babies will be born prenatally exposed to alcohol and it will often only be at puberty that the true extent of their disability will become clear.

Different terms are used to describe fetal alcohol spectrum disorders (FASDs), depending on the type of symptoms.

Fetal alcohol spectrum disorders (FASDs) refer to the whole range of effects that can happen to a person whose mother drank alcohol during pregnancy. These conditions can affect each person in different ways, and can range from mild to severe.

Not everyone will have all the signs and symptoms outlined below. Effects will depend on the time of pregnancy during which alcohol was consumed, the amount that was consumed, the nutrition of the mother, other drug use, the general health of the mother and researchers have now found that epigenetics also plays a part in the severity of the fetal alcohol spectrum disorders (FASDs) 3).

People with fetal alcohol spectrum disorder may have trouble setting personal boundaries and observing other people’s boundaries. They often have emotional problems, can be impulsive, may not be able to sustain relationships, and often cannot anticipate consequences. They have difficulty paying attention, have poor organizational skills and have trouble completing tasks and managing time.

A person with an fetal alcohol spectrum disorder (FASD) might have:

Other possible problems include:

These criteria have been simplified for a general audience. They are listed here for information purposes and should be used only by trained health care professionals to diagnose or treat fetal alcohol syndrome.

A diagnosis of fetal alcohol syndrome requires the presence of all three of the following findings:

There are many types of treatment options, including medication to help with some symptoms, behavior and education therapy, parent training, and other alternative approaches. No one treatment is right for every child. Good treatment plans will include close monitoring, follow-ups, and changes as needed along the way.