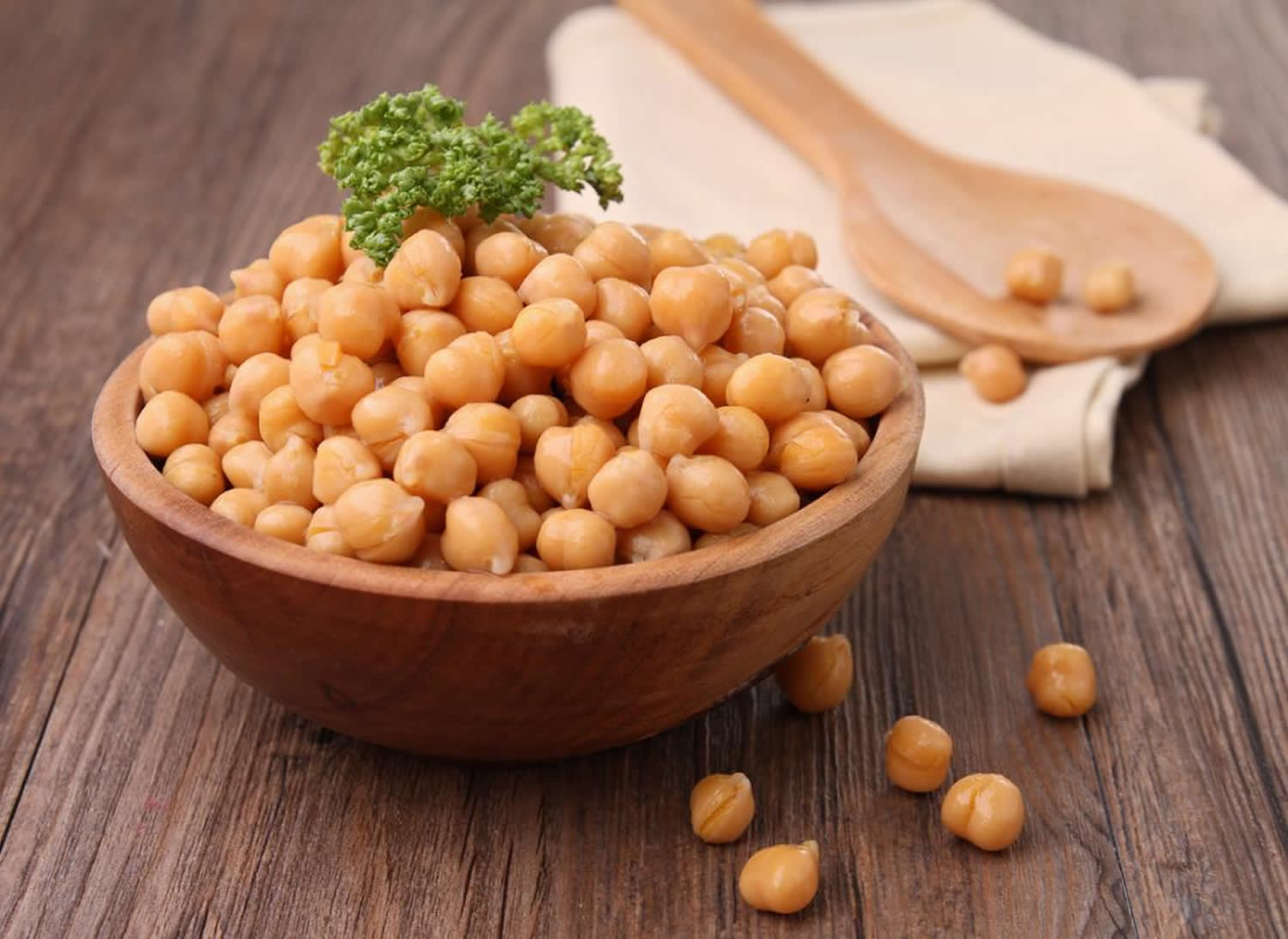 Chickpea (Cicer arietinum L.), also called garbanzo bean or Bengal gram, is an important pulse (edible seeds) crop grown in the legume family and consumed all over the world, especially in the Afro-Asian countries because of their nut-like flavor and versatile sensory applications in food 1). Currently, chickpea is grown in over fifty countries across the Indian subcontinent, North Africa, the Middle East, southern Europe, the Americas and Australia. Globally, chickpea is the third most important pulse crop in production, next to dry beans and field peas 2). India is the world’s leading producer of chickpeas. Worldwide over 14.2 metric tons of chickpeas were harvested in 2014 according to the Food and Agriculture Organization (FAO) of the United Nations 3). Two main varieties of chickpeas exist: the light seeded Kabuli type and the smaller dark Desi type 4). Pulses are unique in comparison to other plant foods in that they contain higher proportions of protein (17%–30% by dry weight). The main proteins found in chickpeas, similar to other legumes, are albumins and globulins. Smaller amounts of glutelins and prolamines are also present 5). There is a growing demand for chickpea due to its nutritional value. In the semi-arid tropics, chickpea is an important component of the diets of those individuals who cannot afford animal proteins or those who are vegetarian by choice. Chickpea is a good source of carbohydrates and protein, together constituting about 80 % of the total dry seed mass 6) in comparison with other pulses. Chickpea is cholesterol free and is a good source of dietary fibre, vitamins and minerals 7).

Traditional hummus is a dip or spread made from cooked, mashed chickpeas, blended with tahini, olive oil, lemon juice, and spices. A variety of other forms of hummus—or bean-based dips labeled as hummus that do not follow the traditional hummus recipe—exist on the market, each containing unique ingredients which may or may not contribute to nutrient intakes and/or have benefits beyond basic nutrition. 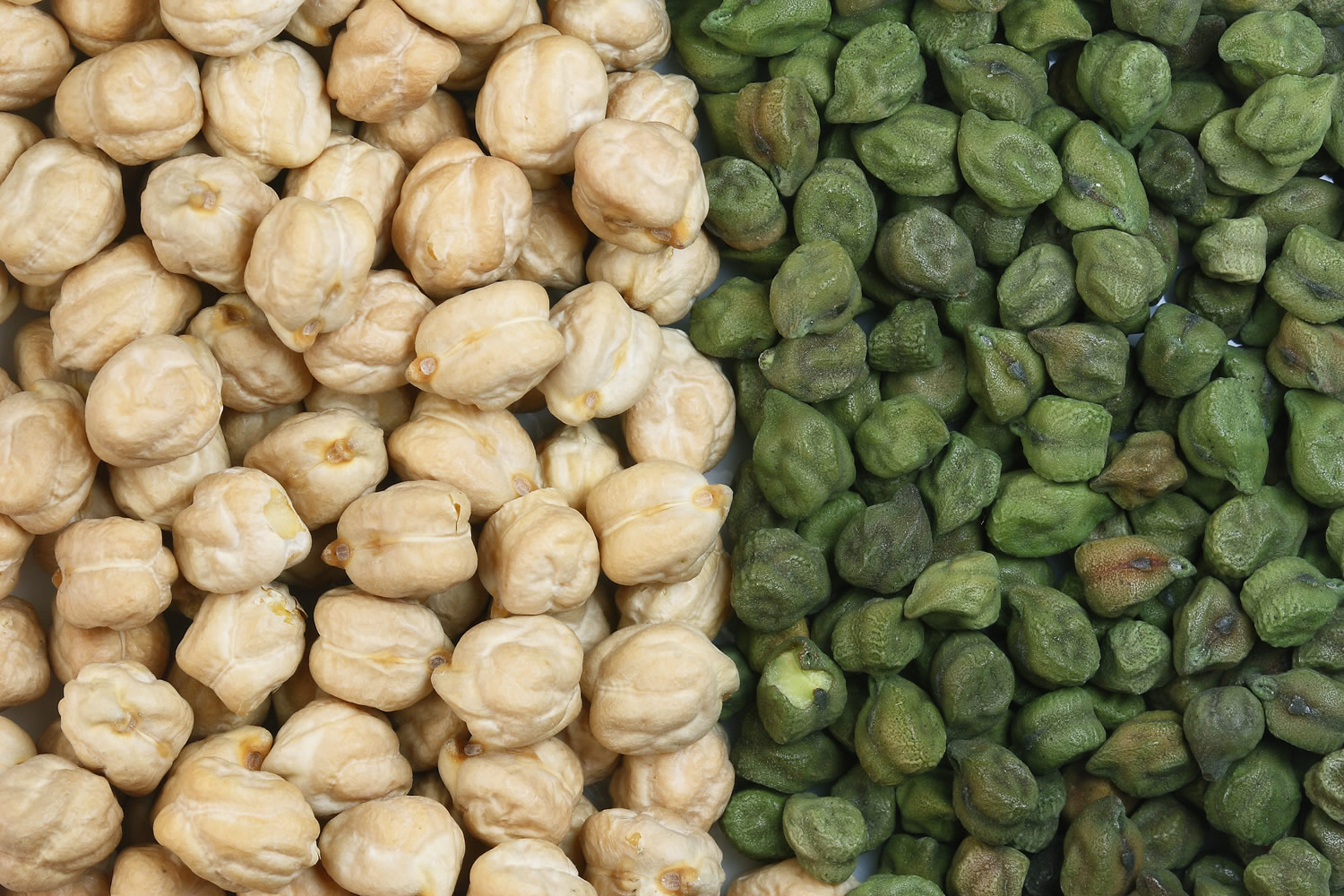 Chickpeas are a nutrient-dense food, providing rich content (20% or higher of the Daily Value, DV) of protein, dietary fibre, folate, and certain dietary minerals such as iron and phosphorus. The total dietary fiber content in chickpea is 18–22 g/100 g of raw chickpea seed. Soluble and insoluble dietary fiber content are about 4–8 and 10–18 g/100 g of raw chickpea seed, respectively 8). Thiamin, vitamin B6, magnesium, and zinc contents are moderate, providing 10–16% of the DV. Chickpeas have a Protein Digestibility Corrected Amino Acid Score of about 0.76, which is higher than many other legumes and cereals 9).

Compared to reference levels established by the United Nations Food and Agricultural Organization and World Health Organization, proteins in cooked and germinated chickpeas are rich in essential amino acids such as lysine, isoleucine, tryptophan, and total aromatic amino acids 10).

Chickpeas and hummus are an easy means to help consumers meet the recommended 1.5 cups of legumes per week. Four tablespoons (~100 kcal) of traditional, chickpea-based hummus per day provides approximately 2 cups of legumes per week and ~25 grams of dietary fiber. This same amount also provides approximately 14 g of plant protein per week, as well as many other essential vitamins and minerals.

a Data obtained from the USDA National Nutrient Database for Standard Reference; b Based on a caloric intake of 2000 kcal, for adults and children four of more years of age; c Nutrient Database Number (NDB No.) in the USDA Food Composition Databases. DV = daily value; NR = not reported; ND = no data.

Are chickpeas good for you

Although pulses have been consumed for thousands of years for their nutritional qualities, it is only during the past two to three decades that interest in pulses as food and their potential impact on human health has been revived. Chickpea consumption has been reported to have some physiological benefits that may reduce the risk of chronic diseases and optimise health.

In general, diets high in fiber, low in energy density and glycemic load, and moderate in protein are thought to be particularly important for weight control 15). In the National Health and Nutrition Examination Survey (NHANES) 2003–2010 dataset, chickpea/hummus consumers were 53% less likely to be obese and 51% less likely to have an elevated glucose level. Likewise, consumers had a lower body mass index (BMI) (26.4 ± 0.5 vs. 28.6 ± 0.1) and waist circumference (92.2 ± 1.3 vs. 97.9 ± 0.3 cm) compared to non-consumers 16). This could be somewhat due to other healthy lifestyle patterns that one might expect individuals that have higher intakes of pulses such as chickpeas to exhibit (NHANES is observational data and cannot assess causality). Pulse consumption, alone 17) or included in a dietary pattern 18), has also been associated in epidemiologic studies with reduced body weight, waist circumference, and risk of overweight and obesity. Consumption of chickpeas/hummus has additionally been suggested as affecting markers of both metabolic syndrome and cardiovascular disease in both human and animal intervention studies.

Chickpeas have a low glycemic index 19); however, very few studies have assessed the glycemic effects of hummus in vivo. Post-prandial glucose responses were four times lower than that of white bread in a study of 10 healthy subjects consuming hummus. Blood glucose levels were significantly lower after 45 minutes when subjects were fed hummus with 25 g of available carbohydrates (in the form of white bread), as compared to 25 g of carbohydrates alone (note: no differences in blood glucose levels were found at time intervals prior to 45 min post-consumption). This suggests that hummus may be able to partially attenuate the effects of foods with a higher glycemic index upon consumption 20). When consumed long-term, chickpea intake also significantly improved glycemic control in a 20-week crossover study of 45 individuals with elevated cardiovascular disease risk factors 21). Other human intervention studies have shown pulses to lower glycemic responses by slowing the rate of carbohydrate absorption 22). Mollard et al. showed blood glucose response to be dependent on pulse type in 25 young healthy males. Men who consumed either chickpeas or lentils with a pizza meal had lower blood glucose responses as compared to those who consumed yellow peas with a pizza meal 23). Cross-sectional analysis of NHANES 2003–2010 did not show any cross-sectional association with fasting insulin or glucose levels in those who reported consuming chickpea/hummus intake vs. non-consumers 24). Yang et al. 25) showed that chickpeas significantly improve insulin resistance and prevent post-prandial hyperglycemia and hyperinsulinemia induced by a chronic high-fat diet in rats. Likewise, emerging epidemiological evidence shows that pulse consumption is associated with a decreased risk for type-2 diabetes 26)

Traditional hummus has a fat content 4-5 times that of chickpeas alone (see Table 2), which may account for the improved blood glucose and insulin response, since dietary fat delays gastric emptying and therefore slows carbohydrate absorption 27). The glycemic index of hummus is approximately half that of chickpeas 28), which could partially explain why larger decreases in blood glucose levels in the study with hummus vs. those with chickpeas were shown. While blood glucose and insulin response may be attenuated by hummus consumption, it should be noted that the additional fat content contributes additional calories to the diet.

Soluble fiber is well known for its positive effects on total cholesterol and low-density lipoprotein cholesterol (LDL “bad” cholesterol), which are recognized validated biomarkers of cardiovascular disease 36). Some studies have also shown an increased benefit of increased vegetable protein intake in relation to cardiovascular disease 37). The higher amounts of dietary fiber and protein content of chickpeas, and possibly the presence of enzyme inhibitors and “antinutrients” such as tannins present in chickpeas, may also help partially explain these findings.

Butyrate is a principal short chain fatty acid (about 18% of the total volatile fatty acids) produced from the consumption of a chickpea diet (200 g/day) in healthy adults 38). Butyrate has been widely reported to suppress cell proliferation 39) and induce apoptosis 40), which may reduce the risk of colorectal cancers. Several other dietary bioactive compounds, such as lycopene, Biochanin A, and saponins that have been shown to reduce the risk of certain types of cancers are also present in chickpeas and hummus 41). Murillo et al. 42) showed a 64% suppression of azoxymethane-induced aberrant cryptic foci in rats supplemented with 10% chickpea flour. This study suggested that a high concentration of saponins in the chickpea flour could partially account for the reported reductions in lesions 43). Similarly, the inclusion of chickpea seed coat fiber in the diet has been shown to decrease the toxic effects of N-nitrosodiethylamine on lipid peroxidation and antioxidant potential 44). While there is no data specific to hummus in this area, an epidemiological study found that pulse consumption was also associated with a reduced risk of some cancers 45).

Dietary fiber is the indigestible part of plant foods, containing poly/oligosaccharides, lignin, and other plant substances. Dietary fiber is classified into soluble and soluble fibers. Soluble fibers are slowly digested in the colon, while insoluble fibers are indigestible and promote bowel movements. Similar to other plant foods, legumes, and pulses, significant increases in dietary fiber intake have been reported when chickpeas and/or hummus is added to the diet 46). Human studies of chickpeas report overall improvements in bowel health characterized by increased frequency of defecation, ease of defecation, and softer stool consistency while on a chickpea diet as compared to a habitual diet 47).

Chickpea seed oil contains different sterols, tocopherols and tocotrienols 48). These phytosterols have been reported to exhibit anti-ulcerative, anti-bacterial, anti-fungal, anti-tumour and anti-inflammatory properties coupled with a lowering effect on cholesterol levels 49). Δ7-Avenasterol and Δ5-avenasterol, phytosterols present in chickpea oil, have antioxidant properties even at frying temperatures 50). Carotenoids such as lutein and zeaxanthin, the major carotenoids in chickpea seeds, are speculated to play a role in senile or age-related macular degeneration. Though there are some epidemiological and association studies suggesting a beneficial effect of lutein and zeaxanthin on age-related macular degeneration, evidence from randomized control trial on the effect of carotenoids on age-related macular degeneration is available. Carotenoids have also been reported to increase natural killer cell activity 51). Vitamin A, a derivative of β-carotene, is important in several developmental processes in humans such as bone growth, cell division/differentiation and, most importantly, vision. It has been reported that at least three million children develop xerophthalmia (damage to cornea) and about 250 000–500 000 children become blind due to vitamin A deficiency 52). Chickpea has been reported to have higher levels of carotenoids (explained above) than ‘golden rice’, and it could be potentially used as a source of dietary carotenoids.

Chickpea seeds have been used in traditional medicine as tonics, stimulants and aphrodisiacs 53). Further, they are used to expel parasitic worms from the body (anthelmintic property), as appetizers, for thirst quenching and reducing burning sensation in the stomach 54). In the Ayurvedic system of medicine, chickpea preparations are used to treat a variety of ailments such as throat problems, blood disorders, bronchitis, skin diseases and liver- or gall bladder-related problems (biliousness). In addition to these applications, chickpea seeds are also used for blood enrichment, treating skin ailments, ear infections, and liver and spleen disorders. Uygur people of China have used chickpea in herbal medicine for treating hypertension and diabetes for over 2500 years 55).