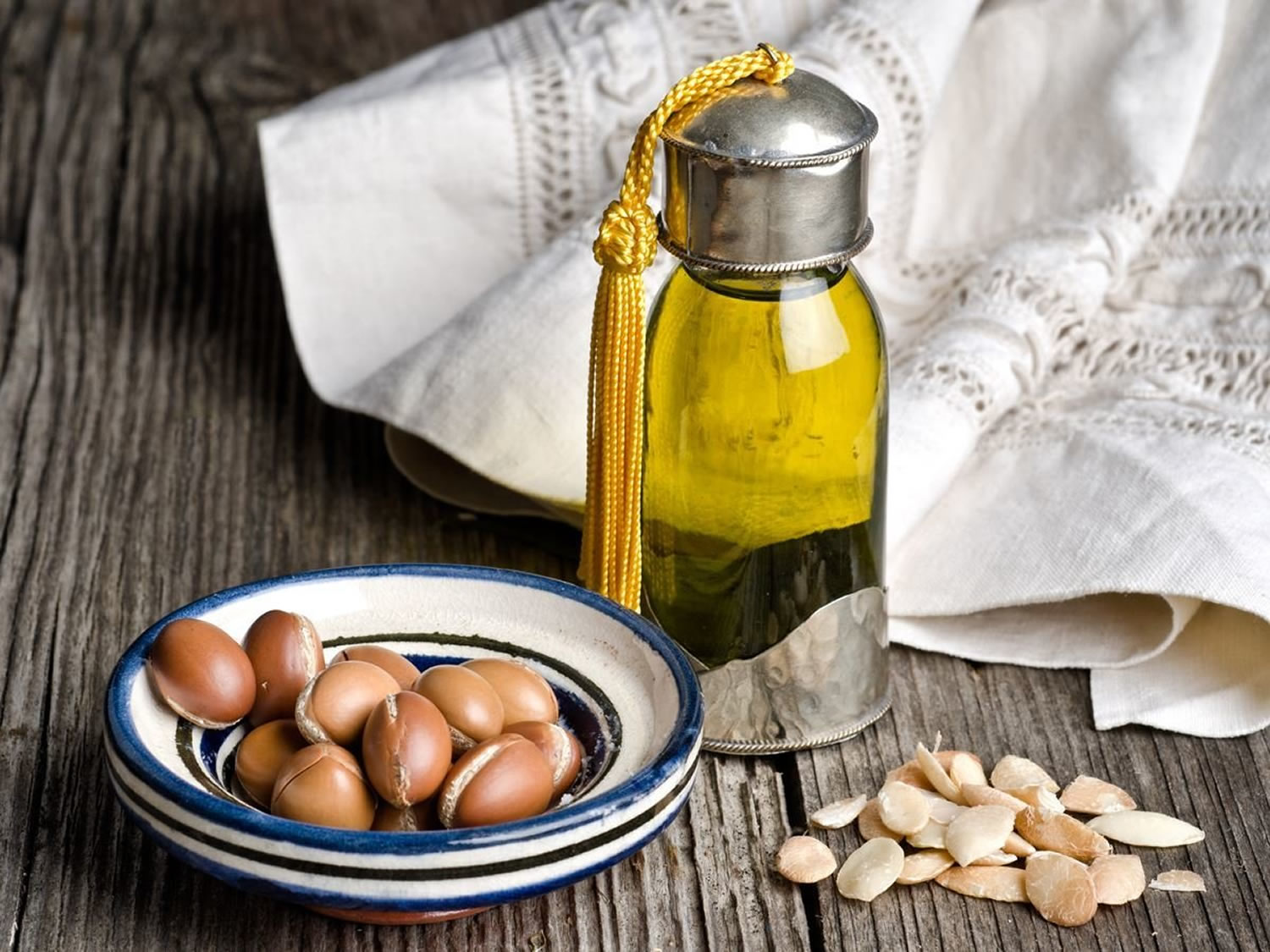 What is argan oil

Argan oil is a plant oil produced from the kernels of the argan tree (Argania spinosa L.) that is endemic to Morocco. In Morocco, argan oil is used to dip bread in at breakfast or to drizzle on couscous or pasta. It is also used for cosmetic purposes. The argan fruit is oval-shaped and a little bigger than an olive. The outer layer of the argan nut is a thick peel that covers the fleshy part.

Argania spinosa is only endemic in south-western Morocco, where it covers an area of 3200 square miles that constitutes a unique biotope, named ‘the argan forest’. In Morocco, the argan forest has an essential agro-economic function. Because the argan tree is drought-resistant, it is also a powerful weapon for slowing down desertification 1).

Traditionally, argan oil is exclusively prepared by women 2). Once the ripe fruits have been collected, their peel and pulp are discarded, affording ovoid argan nuts of the size of a big olive. Argan nuts are then manually broken, the women firmly holding them between their thumb and index finger along the longest seed diagonal and violently hitting them with a stone. The kernels are then collected and roasted for a few minutes in clay plates if dietary argan oil is to be prepared. The roasted kernels are then crushed with a manual millstone, affording a brownish dough that is subsequently hand-mixed with warm water for several minutes. The wet dough is then hand-pressed, becomes solid and releases a brown emulsion that is decanted after several minutes to furnish the argan oil. The extraction residue (press cake) is very bitter, still rich in oil and used to feed cattle.

For industrial or laboratory purposes, argan oil can be extracted from pulverized kernels by lipophilic solvents 3). After solvent evaporation, argan oil is directly obtained. Only the cosmetics industry uses argan oil prepared according to this method. The term “enriched argan oil” describes an argan oil obtained by flash distillation of argan oil prepared by one of the above-mentioned methods 4). The level of unsaponifiable matter in this type of oil is three times lower than that observed in the press-extracted oil. 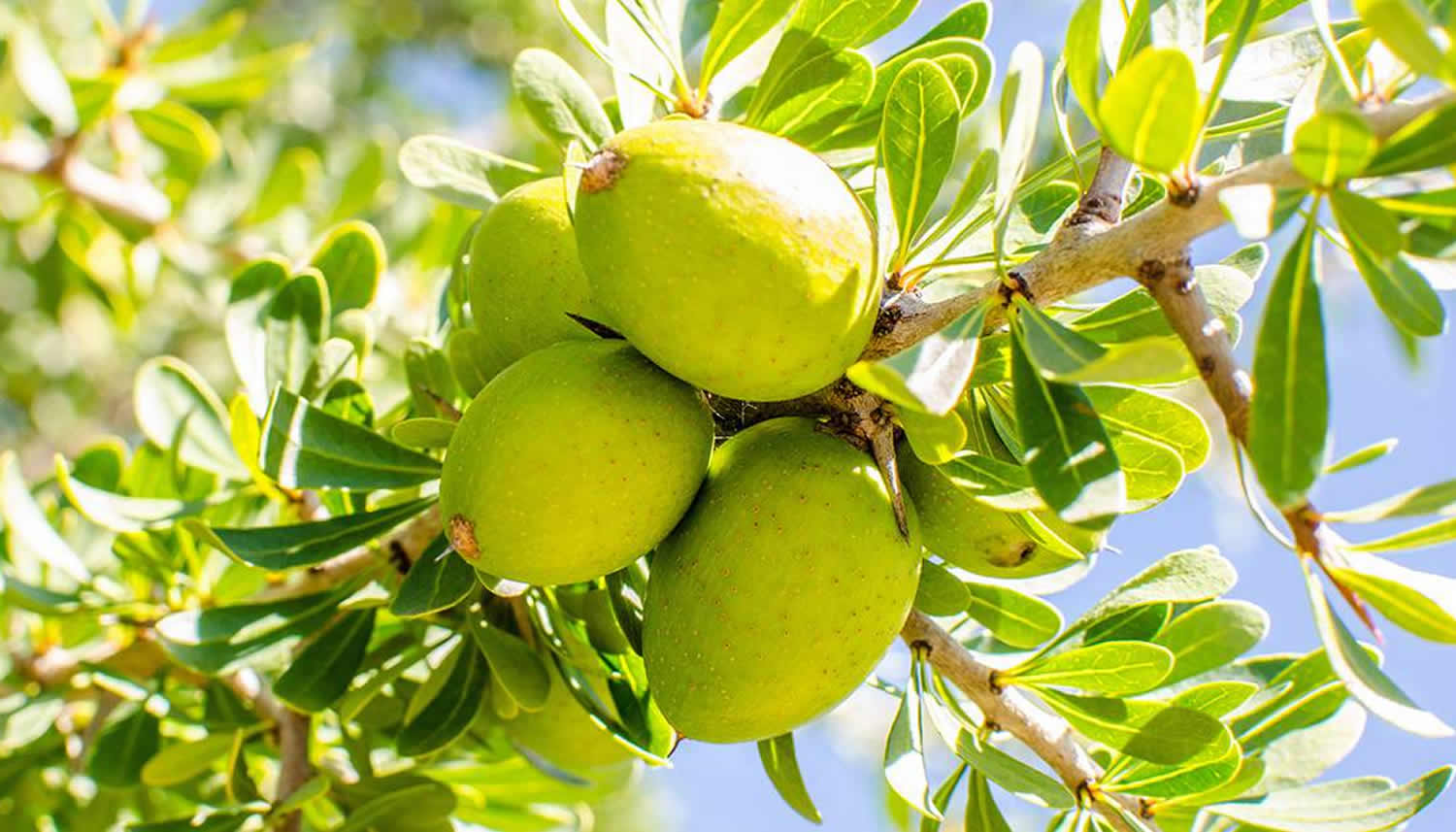 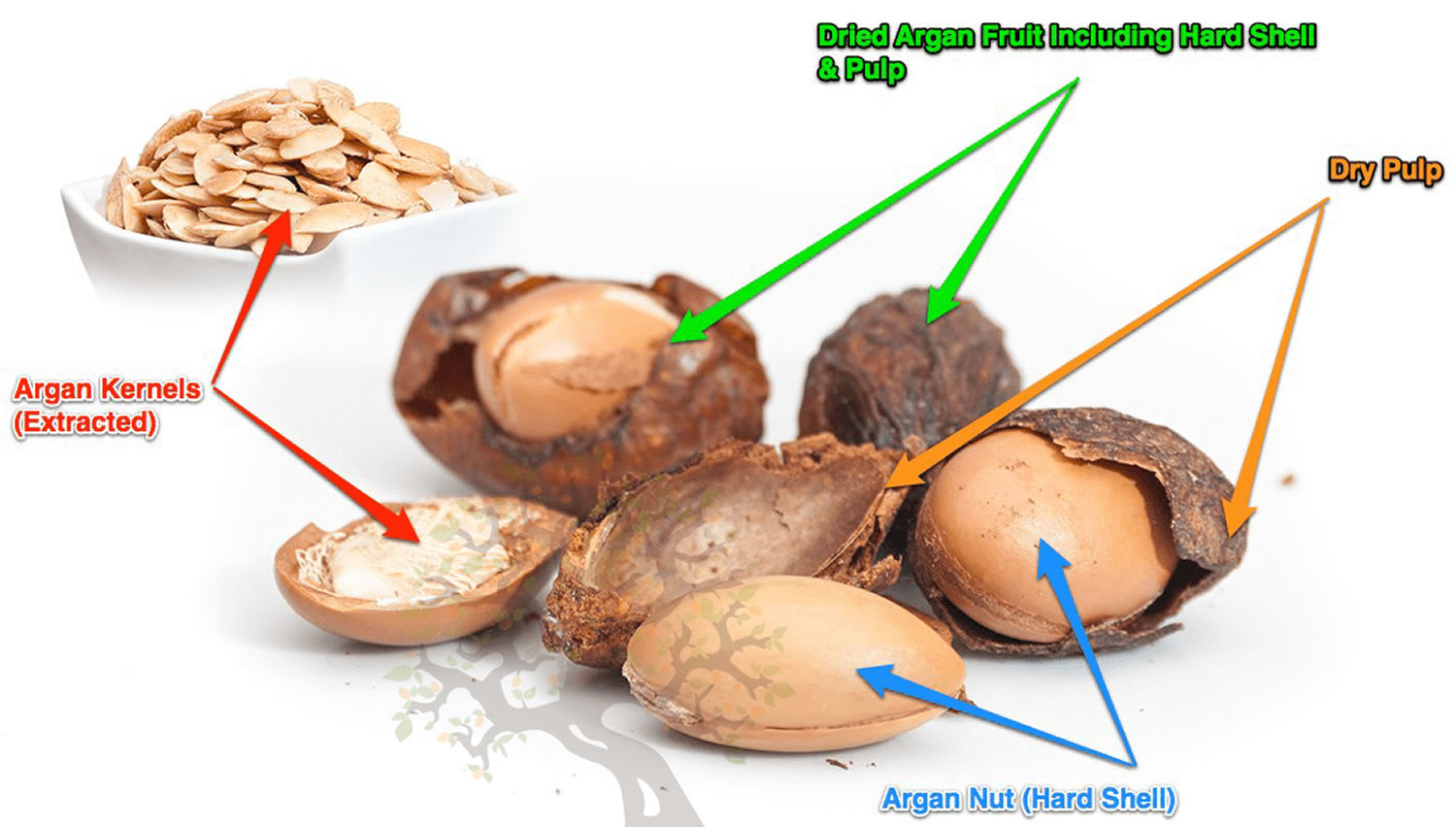 Unsaponifiable matter constitutes 1% of argan oil. It is made of carotenes (37%), tocopherols (8%), triterpene alcohols (20%), sterols (29%), and xanthophylls (5%). In extra-virgin argan oil, the levels of tocopherols are between 600 and 900 mg/kg. The main tocopherol found in argan oil is γ-tocopherol (between 81 and 92%) 7); it is a strong antioxidative agent. α-, β- and δ-tocopherols represent 2.4–6.5%, 0.1–0.3%, and 6.2–12.8%, respectively, of the total tocopherol fraction. Previous in vivo (animal studies) data indicate that γ-tocopherol may be a much more potent antioxidant than α-tocopherol. It is highly likely that γ-tocopherol unlike α-tocopherol will protect against reactive oxygen species mediated inflammation 8).

The sterol content of argan oils is in the range 272–357 mg/100g 9). These sterols are rare in vegetable oils, and interestingly, their occurrence in argan oil and the absence of β-sitosterol, which is present in several other vegetable oils is a bona fide marker of argan oil adulteration with other cheaper ones mostly containing β-sitosterol.

‘Cold-pressed oils’ and ‘virgin oils’ are two terms that can be confusing.

Following this definition, edible argan oil is a cold-pressed oil. It is prepared by pressing the slightly roasted kernels of the argan tree [Argania spinosa (L.) Skeels] fruit.

This is the type of oil that has been prepared for centuries by Moroccan women on a family scale. However, traditionally prepared argan oil chemical composition is poorly reproducible. Such oil is generally of low quality and has a short shelf-life (Table 2). For a single person, 2–2.5 liter of oil are obtained from 100 kg of dry fruit after 58 h of work.

To produce large quantities of high-quality argan oil, women’s cooperatives have been started in south-western Morocco. In these cooperatives, argan oil is prepared by mechanically cold-pressing argan kernels. Using this technology, 4–6 liter of oil can be obtained from 100 kg of dry fruit after 13 hours of work by a single person.

Edible argan oil is prepared from roasted kernels, whereas unroasted kernels are used in the production of cosmetic argan oil (Table 2). The origin of the fruit and the processing method used dramatically influence the quality of the argan oil produced. Because of this, stringent preparation rules have been implemented in the cooperatives. These include the use of mechanical pressing in place of hand-pressing and mechanical fruit peeling. The polyphenol and tocopherol content of traditionally extracted and cold-pressed argan oils is similar. Their different shelf life is mainly due to the selection of the argan nuts and the frequent use of water of poor bacteriological quality during the traditional process.

Cosmetic argan oil is directly used for skin application or as a hair lotion. It does not have the hazelnut taste of edible argan oil. Its content of volatile components is lower than that of edible argan oil 14) and its shelf life is also shorter, the latter extending up to 2 years, probably due to the formation during roasting of Maillard compounds, which favour preservation 15).

Industrially, cosmetic argan oil is prepared by solvent extraction of crushed argan kernels. No quality control is required for argan nuts (Table 2). Solvent-extracted argan oil, which is also sometimes flash distilled and deodorised, is used exclusively in the composition of creams, shampoos and body lotions. Preservatives are frequently added to compensate for the naturally protective agents lost during extraction and/or distillation (tocopherols, polyphenols etc.).

Argan oil has been used as a food and as a food ingredient, and has been applied to the skin for centuries, therefore its acute and chronic toxicity is assumed to be nil, particularly when orally administered at ordinary doses. Initially, argan oil’s pharmacological properties have simply been deduced by consideration of the properties of its constituents, which have been isolated and pharmacologically evaluated, often in simple models. The chemical composition of argan oil has already been reviewed in detail 16). Recently, scientific evaluation of the traditionally claimed benefits of argan oil consumption has begun, using animal models or cohort or clinical studies. These studies (Table 3) were aimed at determining if argan oil has only nutritional properties or if it can be said to also possess pharmacological properties 17). Nevertheless, the general benefits indicated by some primary results have already triggered the preparation of argan oil-based emulsions for parenteral nutrition 18).

Table 3. Key papers on the pharmacology of argan oil and their scientific findings

Because argan and olive oils share a similar composition, the cancer chemoprotective effect attributed to olive oil has also been attributed to argan oil 38). Argan oil’s high levels of γ-tocopherol – by far the most potent antioxidant of the tocopherols – and its high squalene content have even led to a suggestion that its chemoprotective effect may even be greater 39).

Other potential yet to be proven health benefits of argan oil

Some few clinical studies provide evidence that argan oil can promote additional benefits on risk factors for cardiovascular disease. In 2005, sixty young men were included in an interventional study. The analysis of the data indicated an increase of paraoxanase 1 (PON1) activities coupled with an increase of plasma vitamin E concentration 47). Some years later, the vitamin E serum level of 151 menopausal women consuming either olive or argan oil was determined, and in the argan oil consumer group, Vitamin E serum level was increased 48). In another study carried out on 60 young and healthy male volunteers aged between 23 and 40 years old, consumption of argan oil showed, after three weeks of intake, a significant increase in serum concentration levels of the androgen hormones including testosterone and luteinizing hormone 49). More recently, 37 patients (18 men, 19 women) with end-stage renal disease on maintenance displayed an improvement in markers directly associated with the lipid profile and oxidative stress status 50). In addition, evidence from sixty menopausal women indicates that the daily consumption and/or topical application of argan oil for a period of 1–2 months has an anti-aging effect on the skin demonstrated by the improvement of skin elasticity 51).

As regards to argan pulp, this is described to contain essential oils and an unsaponifiable fraction (up to 3.3%) which is rich in sterols and tritepene aglycones. Some compounds have already found industrial applications such as erythrodiol 52). Glycosylated triterpenes (saponins) of the basic acid-type in the argan pulp have been assayed in a few preliminary biological assays and deserve special attention related to their pharmacology. These are more particularly fungicidal against Cladosporium cucumerinum and Polysticus versicolor, antibacterial as well as analgesic and anti-inflammatory agents with low toxicity. Molluscicidal activity against Biophalaria glabrata, has also been reported 53). Argan pulp, contains a diverse range of polyphenols with flavans, procyanidins, flavonoids (mostly quercetin derivatives), phenolic acids along with a minor phenolic aldehyde being reported at a concentration of up to 15.4 g/kg 54). The acyl-glucosylflavonoids which are also present in argan pulp have shown a variety of functions, such as anti-feedant and phytoalexin capacity, signaling molecules, and UV protectants 55). Acyl-glucosylpolyphenols are physiologically important phenolic compounds in plants because these are the final, functional products of secondary metabolism 56).