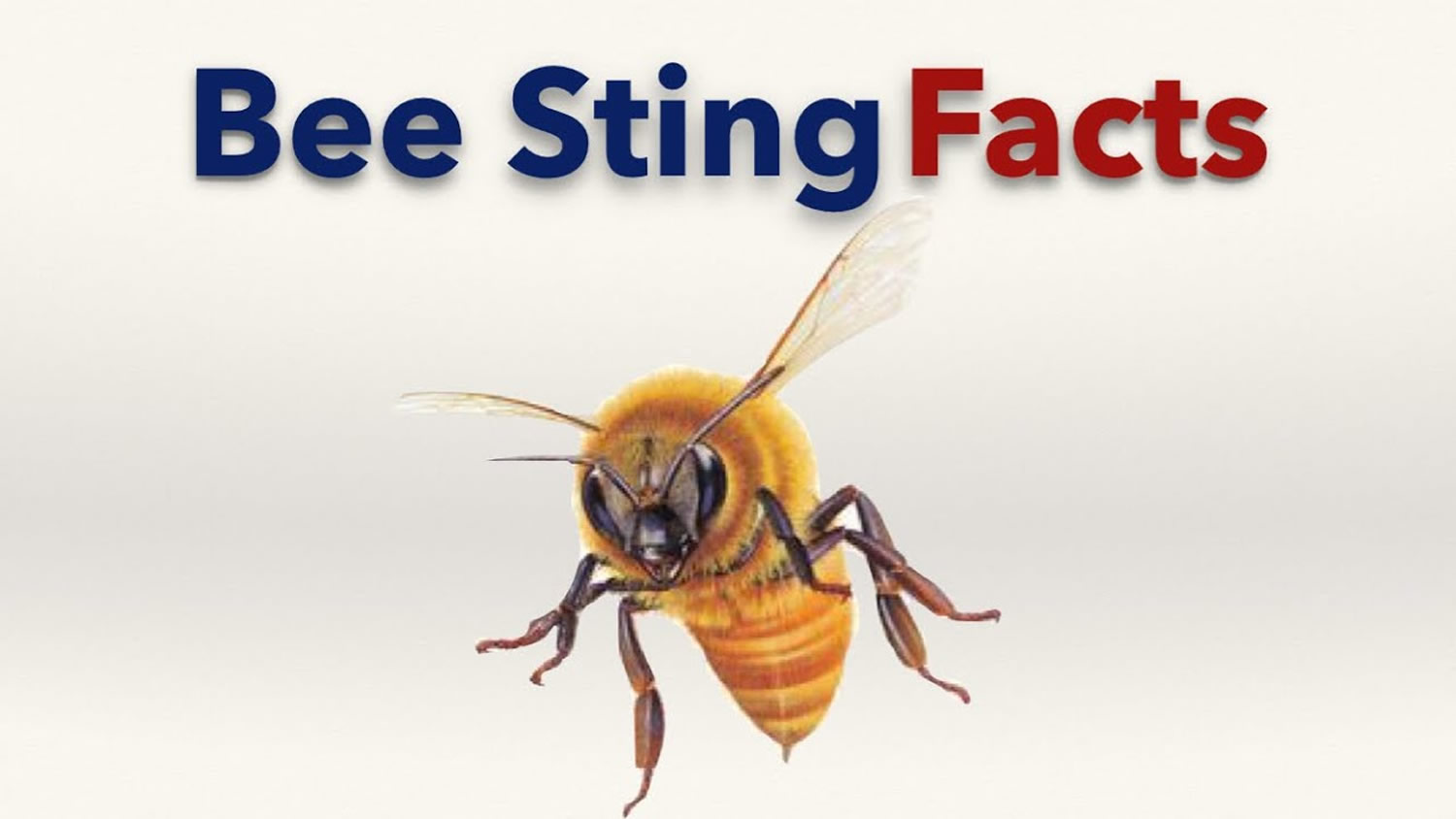 What to do for a bee sting

Bee stings are a common outdoor nuisance. In most cases, bee stings are just annoying, and home treatment is all that’s necessary to ease the pain of bee stings. But if you’re allergic to bee stings or you get stung numerous times, you may have a more-serious reaction that requires emergency treatment 1).

You can take several steps to avoid bee stings — as well as hornet and wasp stings — and find out how to treat them if you do get stung.

Symptoms of a Bee sting

Bee stings can produce different reactions, ranging from temporary pain and discomfort to a severe allergic reaction. Having one type of reaction doesn’t mean you’ll always have the same reaction every time you’re stung, or that the next reaction will necessarily be more severe.

Most of the time, bee sting symptoms are minor and include:

In most people, the swelling and pain go away within a few hours.

Some people who get stung by a bee or other insect have a bit stronger reaction, with signs and symptoms such as:

A severe allergic reaction (anaphylaxis) to bee stings is potentially life-threatening and requires emergency treatment. A small percentage of people who are stung by a bee or other insect quickly develop anaphylaxis. Signs and symptoms of anaphylaxis include:

People who have a severe allergic reaction to a bee sting have a 30 to 60 percent chance of anaphylaxis the next time they’re stung. Talk to your doctor or an allergy specialist about prevention measures such as immunotherapy (“allergy shots”) to avoid a similar reaction in case you get stung again.

Generally, insects such as bees and wasps aren’t aggressive and only sting in self-defense. In most cases, this results in one or perhaps a few stings. In some cases a person will disrupt a hive or swarm of bees and get multiple stings. Some types of bees — such as Africanized honeybees — are more likely than are other bees to swarm, stinging in a group.

If you get stung more than a dozen times, the accumulation of venom may induce a toxic reaction and make you feel quite sick. Signs and symptoms include:

Multiple stings can be a medical emergency in children, older adults, and people who have heart or breathing problems.

To sting, a bee jabs a barbed stinger into the skin. Bee sting venom contains proteins that affect skin cells and the immune system, causing pain and swelling around the sting area. In people with a bee sting allergy, bee venom can trigger a more-serious immune system reaction.

You’re at increased risk of bee stings if:

The following tips can help reduce your risk of getting stung by bees:

Know what to do when you’re exposed to bees:

If you’ve had a reaction to bee stings that suggests you might be allergic to bee venom, your doctor may suggest one or both of the following tests:

Allergy skin tests and allergy blood tests are often used together to diagnose insect allergies. Your doctor may also want to test you for allergies to yellow jackets, hornets and wasps — which can cause allergic reactions similar to those of bee stings.

You may be given medications including:

If you’re allergic to bee stings, your doctor is likely to prescribe an emergency epinephrine autoinjector (EpiPen, Auvi-Q, others). You’ll need to have it with you at all times. An autoinjector is a combined syringe and concealed needle that injects a single dose of medication when pressed against your thigh. Always be sure to replace epinephrine by its expiration date.

Be sure you know how to use the autoinjector. Also, make sure the people closest to you know how to administer the drug — if they’re with you in an anaphylactic emergency, they could save your life. Medical personnel called in to respond to a severe anaphylactic reaction also may give you an epinephrine injection or another medication.

Consider wearing an alert bracelet that identifies your allergy to bee or other insect stings.

Bee and other insect stings are a common cause of anaphylaxis. If you’ve had a serious reaction to a bee sting or multiple stings, your doctor likely will refer you to an allergist for allergy testing and consideration of allergy shots (immunotherapy). These shots, generally given regularly for a few years, can reduce or eliminate your allergic response to bee venom.

If a bee stings you or your child, follow the suggestions below.

The following steps may help ease the swelling and itching often associated with large local reactions:

Anaphylaxis is a life-threatening, systemic hypersensitivity reaction that may be caused by both immunological and nonimmunological mechanisms. Most reactions are immunoglobulin (IgE) mediated 2). It is the most severe form of allergic reaction and is almost always unexpected 3). Delay in clinical diagnosis and treatment may result in death by airway obstruction or vascular collapse 4). The incidence of anaphylaxis in the United States is 49.8 cases per 100,000 person-years 5). Lifetime prevalence is 0.05 to 2 percent, with a mortality rate of 1 percent 6). Compared with that of the general population, the risk of anaphylaxis is doubled in patients with mild asthma and tripled in those with severe disease 7). The true prevalence and mortality rates may be higher because of the unexpected nature of the disease, the lack of reliable confirmatory testing, confusion over the clinical definition, and underreporting by physicians 8). Patients may arrive at a physician’s office remote from an event or with active symptoms, or they may develop anaphylaxis after administration of common treatments used in the clinic. Patients need to be prepared to recognize and quickly treat anaphylaxis to prevent potentially catastrophic outcomes 9).

Triggers and Causes of Anaphylaxis

Most cases of anaphylaxis are immunoglobulin E (IgE)–mediated. Antibodies exposed to a particular allergen attach to mast cells and basophils, resulting in their activation and degranulation. A variety of chemical mediators are released including histamine, heparin, tryptase, kallikrein, platelet-activating factor, bradykinin, tumor necrosis factor, nitrous oxide, and several types of interleukins 14), 15).

Historically, anaphylaxis-type reactions triggered by the direct activation of the mast cell (e.g., radiocontrast media reactions) were referred to as anaphylactoid reactions. Currently, immune and nonimmune anaphylaxis are the preferred terms to differentiate between IgE-mediated reactions and direct activation reactions. This distinction matters little in the acute clinical setting, because the treatment is the same for both types of reactions. However, the difference is important when deciding on prevention strategies, such as immunomodulation therapy 16), 17).

Signs and symptoms of anaphylaxis

Signs and symptoms usually develop within five to 30 minutes of exposure to the offending allergen, but may not develop for several hours. A biphasic reaction is a second acute anaphylactic reaction occurring hours after the first response and without further exposure to the allergen 18). One to 20 percent of patients with anaphylaxis experience biphasic reactions, which usually occur within eight hours of the initial reaction, but may occur as late as 24 to 72 hours after exposure 19).

Typical reactions with skin manifestations (urticaria) plus cardiovascular or respiratory involvement are easily diagnosed. However, some reactions are atypical and recognised only when the diagnosis is considered because of the context. A sudden onset of symptoms affecting two or more organ systems or just hypotension on its own, even without skin involvement, should trigger consideration of the diagnosis in the right context, ie. recent exposure to a potential allergen or stimulant. Hypotension may be absolute (systolic <90 mmHg) or relative – defined as a greater than 30% drop from baseline/normal for that patient 20).

Anaphylaxis must be considered as a possible cause in any case of acute respiratory distress, bronchospasm, hypotension and/or cardiac arrest. Some real-life examples of difficult to diagnose anaphylaxis are provided in Table 2. A common theme in these examples is the subtlety or absence of skin features. Some other pointers to consider are:

Table 2. Signs and symptoms of Anaphylaxis by Body System

Note: Manifestations are listed in order of clinical importance/frequency.

In 2004, the Second Symposium on the Definition and Management of Anaphylaxis developed clinical criteria for diagnosing anaphylaxis in the acute setting (Table 3) 22). The presence of one of three criteria predicts diagnosis of anaphylaxis 95 percent of the time 23). The clinical history is the most important tool to determine whether a patient has had an anaphylactic reaction and the cause of the episode 24).

In the management of anaphylaxis, administering intramuscular epinephrine and ensuring proper oxygenation and effective circulation are key.3 A suggested protocol is listed in Table 4. Performing a primary survey and providing supportive care for the patient’s airway, breathing, and circulation (with administration of epinephrine) are the critical initial steps. Patients should have easy access to commercially made, nonexpired epinephrine autoinjectors, which are preferred for delivering this therapy.

Figure 1. Provides step-by-step instructions on how to use the current Epipen 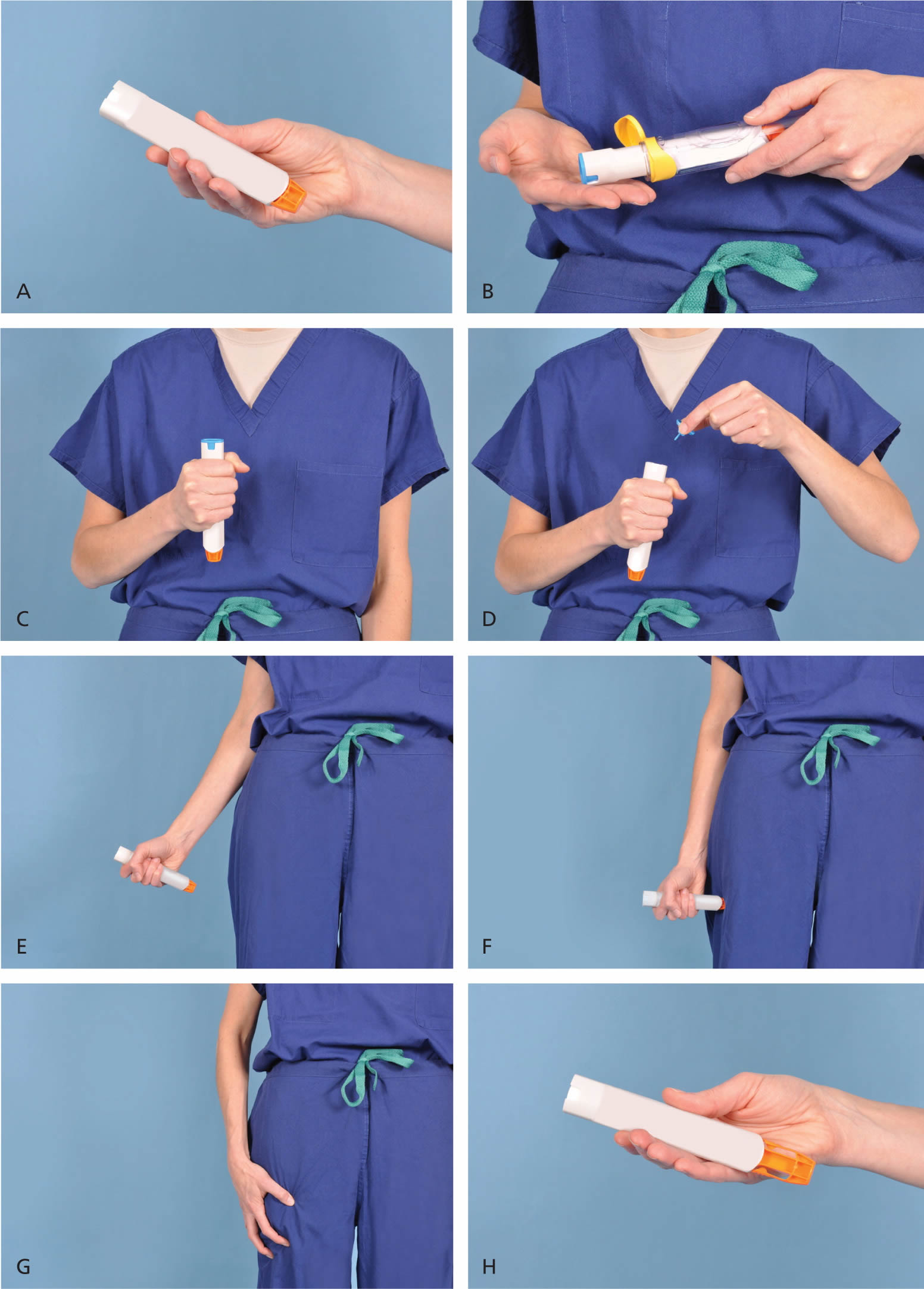 Figure 1. How To Use Epipen

Demonstration of appropriate deployment of the (A) Epipen (released in 2008). For demonstration purposes, a trainer device is being used instead of a live device; however, the coloring of key components is the same as the actual adult device. (B) Open the yellow cap of the carrying case and remove the device from its storage tube (the Epipen Jr. has a green cap). (C) Grasp and form a fist around the unit with the orange tip facing down. (D) With the other hand, remove the blue safety release. (E) Aim the orange tip toward the outer thigh. (F) Swing the arm and jab the device firmly into the outer thigh, at a 90-degree angle, until the device clicks. The needle will deploy at this time into thigh (the autoinjector is designed to work through clothing). Hold the device firmly against the thigh for 10 seconds, so the entire dose will be delivered. (G) Remove the device from the thigh and massage the injection area for 10 seconds. (H) The safety feature of the device, extension of the orange tip that locks into place, will completely cover the needle immediately after use. The used device should be taken to the hospital emergency department with the patient for disposal.

Anaphylaxis is a clinical diagnosis. The value of confirmatory blood testing is limited 26). Two tests that have been evaluated for use in the acute setting are serum histamine and tryptase levels; elevations from baseline levels may be helpful in confirming anaphylaxis 27). Histamine levels must be obtained within one hour of symptom onset, and samples require special handling because histamine breaks down with any movement. Tryptase levels do not increase until 30 minutes after the onset of symptoms and peak at one to two hours; therefore, serial levels are sampled on presentation, one to two hours after presentation, and 24 hours after presentation to assess for a return to baseline 28).

Allergen skin testing and in vitro assay for serum IgE of specific allergens do not reliably predict who will develop anaphylaxis. Allergen testing identifies sensitivity to an allergen, but not whether the patient will have a systemic reaction. Testing is more helpful after an episode of anaphylaxis to identify which allergen most likely caused the reaction and to promote future avoidance.

Referral to a clinical immunologist or allergist can assist with investigation and implementation of a comprehensive management plan. The use of subcutaneous immunotherapy with the relevant insect venom(s) is useful for stinging insect allergy18,19 and in special cases of medicine allergy, medicine desensitisation can also be employed if there is no alternative class of drug that can be used. Patients who experience an initial attack that is severe or refractory to treatment and those with comorbidities may benefit the most from referral.