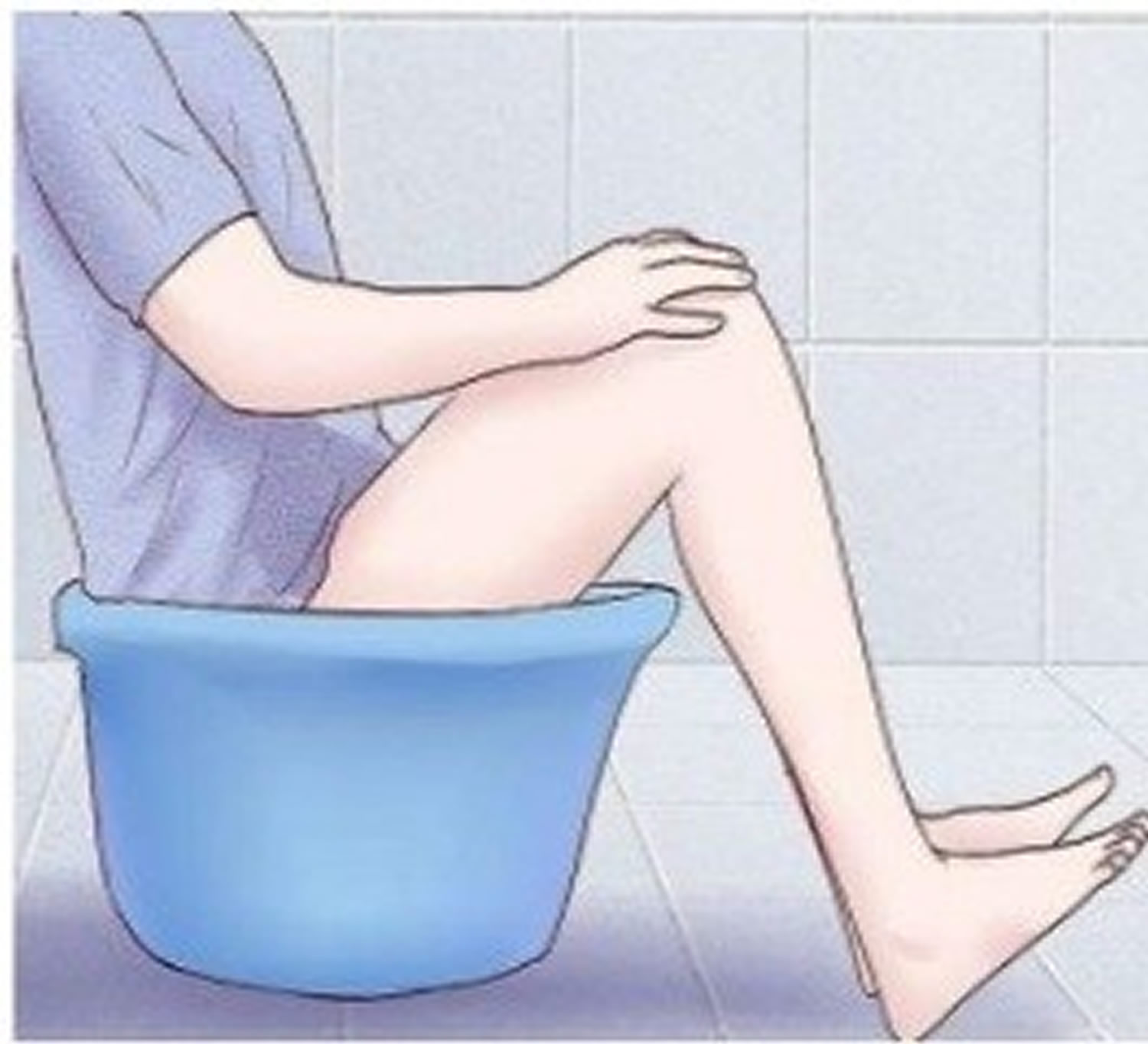 What is a sitz bath

A sitz bath is simply a warm water bath in which a person sits in water up to the hips that are often used for healing or cleansing purposes. You sit in the bath. The water covers only your hips and buttocks. The water may contain medicine.

Though there was no strong evidence to support the use of sitz bath for pain relief and to accelerate fissure or wound healing among adult patients with anorectal disorders, patients were satisfied with using sitz bath and no severe complications were reported 6). In contrast, warm-water sitz bath (104 °F [40°C], 113 °F [45°C], and 122 °F [50°C] for 10 min each time) in anorectal disorder, pain relief was more evident and lasted longer at higher bath temperatures. Pain relief after sitz bath might attribute to internal anal-sphincter relaxation, which might be due to thermosphincteric reflex, resulting in diminution of the rectal neck pressure. The higher the bath temperature, the greater the drop in rectal neck pressure and internal sphincter electromyographic activity, and longer the time needed to return to pretest levels 7). In posthemorrhoidectomy care, water spray method could provide a safe and reliable alternative to sitz bath as a more convenient and satisfactory form of treatment 8).

Cold-sitz bath but not warm-sitz bath, significantly reduced edema during postepisiotomy period 9) and perineal pain, which was greatest immediately after the bath 10).

Warm-sitz bath 104-113 °F (40-45°C) for 10 min, for at least 5 days immediately after the removal of Foley urethral catheter in patient undergone transurethral resection of prostate (TURP), significantly reduced urethral stricture compared with no sitz bath group who had 1.13-fold increased risk of re-hospitalization within 1 month after surgery due to postoperative complications compared with warm-sitz bath group 11). Thirty healthy volunteers and 21 patients with urinary retention after hemorrhoidectomy underwent sitz bath at 40°C, 45°C, and 50°C where the number of spontaneous micturitions increased with higher-temperature baths and it seems to be initiated by reflex (thermo-sphincter reflex) internal urethral sphincter relaxation. The urethral pressure both in normal and retention subjects showed significant reduction, which increased with higher temperature; and vesical pressure or electromyography (EMG) activity of the external urethral sphincter did not show significant differences 12).

The exact physiology of the benefits of warm sitz baths is as yet unknown, although a plausible hypothesis was proposed by Spitzbart and Scharner 13). They observed that the incidence of spontaneous micturition increased in patients with urinary retention after hemorrhoidectomy while performing warm sitz baths, even though there were no significant changes in the vesical pressure or electromyogram activity of the external urethral sphincter with water baths. They proposed that the micturition on sitting in a warm water bath might be initiated by reflex internal urethral sphincter relaxation. The thermosphincteric reflex elicited by a warm sitz bath may lead to relaxation of the internal urethral sphincter, thereby causing vesical contraction and micturition 14). Furthermore, other perceived benefits include improved anal hygiene and symptomatic relief for some patients 15). However, there is also a report that contradicts the benefit of sitz baths 16). That study concluded that sitz baths did not show effects such as pain relief, wound healing, or reduction in consumption of analgesics, and thus that there is no evidence for prescribing sitz baths in the posthemorrhoidectomy period.

Sitz baths are considered very low risk. Because hot baths cause blood vessels to dilate, on rare occasions some people can feel dizzy or have palpitations (rapid or abnormal heartbeat). Individuals prone to such occurrences are advised to have someone standing by to assist them.

How to use a sitz bath

A sitz bath may be created simply by filling a bathtub with some water and sitting in it for a few minutes. Alternatively, a large basin can be used. There are also special devices that fit into toilet bowls. Sitz baths may either be warm or cool, or alternating between the two. Substances such as salt, baking soda, or vinegar may be added to the water.

Warm baths are recommended for reducing the itching, pain and discomfort associated with conditions such as hemorrhoids and genital problems. An ordinary bathtub can be filled with 3 to 4 inches (7.6 to 10.2 cm) of hot water (about 110 °F (43 °C)), and sat in for 15–20 minutes or until the water cools down 17). Alternatively, a large basin can be used, and there are specially built devices that fit into toilet bowls.

Cool sitz baths are said to be helpful in easing constipation, inflammation and vaginal discharge, and, in cases of fecal or urinary incontinence, in toning the muscles.

Several variations of the procedure can be used, with different therapeutic effects depending on the temperature of the water, the length of time spent immersed and the method of immersion (such as dipping and ‘hot and cold alternate’). Some people find that alternating three to five times between a hot bath for 3–4 minutes and an ice-cold bath for 30–60 seconds is soothing. A towel soaked in cold water can be used in place of a cold bath.

For most purposes sitz baths with water are sufficient, though some people prefer to use saline water or water mixed with baking soda or mustard. The use of such additives helps to reduce infections. Women with candidiasis (a vaginal yeast infection) may benefit from a warm bath with salt and vinegar.

Usually, hemorrhoids do not require treatment unless they cause symptoms. Taking stool softeners or bulking the stools with fiber supplements (such as psyllium) may relieve straining with bowel movements. Hemorrhoid symptoms can sometimes be relieved by soaking the anus in warm water in what is known as a sitz bath. The soaking is accomplished by squatting or sitting for 10 to 15 minutes in a partially filled tub or using a container filled with warm (not hot) water placed on the toilet bowl or commode.

For external thrombosed hemorrhoids, especially those that cause severe pain, a doctor may inject a local anesthetic to numb the area and cut out the blood clot or hemorrhoid, which sometimes relieves the pain more rapidly.

Taking acetaminophen or a nonsteroidal anti-inflammatory drug (NSAID) can help alleviate the pain of a thrombosed hemorrhoid. Local anesthetic ointments or witch hazel compresses also may help. Pain and swelling usually diminish after a short while, and clots disappear over 4 to 6 weeks.

For bleeding internal hemorrhoids, a doctor can inject a substance that causes scar tissue to form and destroy the hemorrhoids. This procedure is called injection sclerotherapy.

Large internal hemorrhoids and those that do not respond to injection sclerotherapy can be tied off with rubber bands (a procedure called rubber band ligation). The band causes the hemorrhoid to wither and drop off painlessly. One hemorrhoid is treated about every 2 to 3 weeks.

Other methods to destroy internal hemorrhoids are being tried. Using an infrared light (infrared photocoagulation) appears to be effective. Treatments using lasers, freezing probes, or an electrical current (electrocoagulation) are unproved. Rubber band ligation is still the standard treatment.