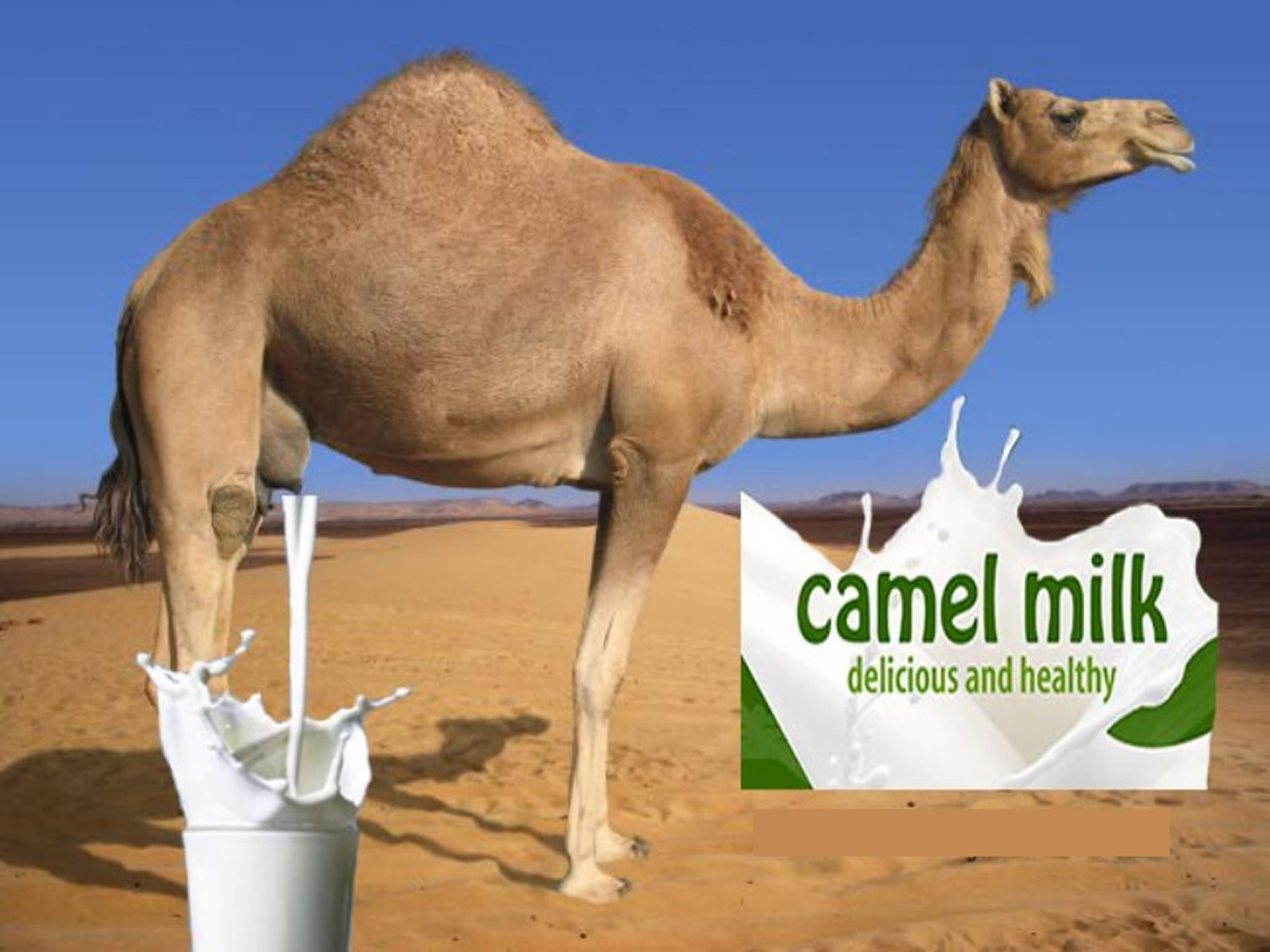 Camel milk has been used for centuries as a medicinal drink in Middle Eastern, Asian, and African cultures 1). Camels can produce an adequate amount of milk in drought areas where other domestic animals have very low production. Camel milk products in the world are popular due to increasing demand and are typically available in pharmacies 2).

Camel milk is the closest to a human mother’s milk. Most camel milk is drunk fresh 3). Fresh camels’ milk has a high pH. The pH of milk is between 6.5–6.7 4). This is similar to the pH of sheeps’ milk. When camel milk is left to stand, the acidity rapidly increases. The lactic acid content increases from 0.03 percent after standing 2 hours to 0.14 percent after 6 hours. Camel milk is different from other milks, having low sugar and cholesterol, high minerals (sodium, potassium, iron, copper, zinc and magnesium, and vitamin C) 5).  A study 6) was made of camel’s milk proteins, of their fraction and amino acid composition. It was shown that the content of the total protein in camel’s milk does not depend on the season and constitutes 15.79–19.52 g of protein per 100 g of camel milk product on the average 7). Examination of the fraction composition of camel’s milk proteins revealed 74.1% of casein and 25.9% of serum proteins (of the total content) 8). Of the total amount of serum proteins, albumins constitute 18.8%, globulins, 13% and proteoso-peptones, 17.8%. A study was also made of the essential amino acid content of camel’s milk revealed that camel milk contain about 36.1% essential amino acids. Tryptophan is a limiting amino acid.

Camel’s milk is generally an opaque white color and has a faint sweetish odor but sharp taste; sometimes it can be salty 9). The most important factor in camel milk is water content 10). Young camels, and especially the humans living in drought areas, are in need of fluid to maintain homeostasis and thermoneutrality. The water content of camel milk fluctuates from 84 percent (Knoess, 1976) to 90 percent (Ohri and Joshi, 1961). When examining only the effects of the lack of drinking water on camel milk, the diet remaining unchanged throughout the year, great changes in water content of milk were found. The camels were only allowed to drink water freely during the winter months. From spring until the end of summer the mothers and calves were allowed to drink only once a week for one hour. With water freely accessible the water content of the milk was 86 percent, but when water was restricted the water content of milk rose to 91 percent 11).

In a meta-analysis study (1905–2006), camel milk was examined and compared with other milks in five manuscripts. The results published in the Food and Agriculture Organization of the United Nations (FAO) have shown 12) the average amount of components of camel milk is protein  3.1%; fat 3.5%; lactose 4.4%; ash 0.79%, and total solids 11.9% 13). The most important factor in camel milk is water content. The total solid content is similar to that human milk 14). With the increase in water content of milk produced by thirsty camels, there was a decrease in the fat content, from 4.3 to 1.1 percent. In the literature, the percentage of milk fat of camels varies from 2.6 to 5.5. Again, the hydration status of the animals would determine the fat content of the milk, as well as the type of forage eaten.

The fatty acid composition of camel milk fat was found to be as follows (in weight percentage) 21):

Camel milk has emerged to have potential therapeutic effects in many diseases such as food allergy, diabetes mellitus 22), hepatitis B 23), autism 24), Rota viral diarrhea, tuberculosis, cancer, liver cirrhosis, rickets, autism spectrum disorder 25), Crohn’s disease and other autoimmune diseases 26), 27), 28). It has a unique composition that differs from other ruminants’ milk. It contains lower fat, cholesterol, and lactose than cow milk, higher minerals (calcium, iron, magnesium, copper, zinc, and potassium) and vitamins A, B2, E, and C compared to cow milk 29) and it contains no beta lactoglobulin and beta casein which are the main causative of allergy in cow’s milk 30). Furthermore, camel milk contains various protective proteins, mainly enzymes which exert antibacterial, antiviral, and immunological properties 31); these include immunoglobulins, lysozymes, lactoferrin, lactoperoxidase, N-acetyl-§-glucosaminidase (NAGase), and peptidoglycan recognition protein 32), which are crucial in preventing food allergy and rehabilitating the immune system. Camel milk proved its potential effect in the treatment of food allergies, due to its inflammation-inhibiting proteins, and hypoallergenic properties, in addition to its smaller size nanobodies, which are different than those found in human. Camel milk nanobodies, as a single domain, show many promising and therapeutic potencies in infection and immunity 33).

Camel milk is a remedy for viruses causing diarrhea (such as Rota virus). Two studies overviewed the effects of camel milk on diarrhea. An animal study in 2010 indicated that fermented camel milk had a higher content of sodium and potassium and stopped diarrhea in model rats. It can be concluded that fermented camel milk can be considered as a good food for high nutritive and therapeutic applications 36). A review study reported improvement in Crohn’s and autism diseases such as diarrhea; bowel movements were considered normal; thus, the authors offered a new perspective on the etiology of some diarrheal diseases 37).

Autism spectrum disorder (ASD) is a severe neurodevelopment disorder characterized by impairments in social orientation, communication, and repetitive behaviors 42). Camel milk provides many benefits, especially for autistic children. Camel milk is traditionally used in autism treatment in some areas of the world. A study published in the 2005 observed the effects of camel milk consumption, instead of cow milk, on several cases of children and adults with autism. Researchers discovered that, when a 4-year-old female participant consumed camel milk for 40 days, a 15-year-old boy consumed camel milk for 30 days, and several 21-year-old autistics consumed camel milk for two weeks, their autism symptoms disappeared. The patients were also observed to be quieter and less self-destructive. The authors reported in another study that camel milk consumption in children under 15 has been effective in controlling some of the symptoms, especially in the group under 10 years 43). Some parents report that their children were suffering from autism; then the children used camel milk, some of their symptoms improved such as better sleep; increased motor planning and spatial awareness; increased eye contact; better language and improved gastrointestinal function. In a study 44) conducted on 60 patients with autism (2 to 12 years old) in Saudi Arabia, the effects of camel and cow’s milk were evaluated when 500 ml of milk twice daily for 2 weeks were given to children. In the analysis, the baseline level of antioxidants of all the children was low. Results after two weeks showed significant improvement in cognitive and behavioral tests due to camel milk and lowered effects of oxidative stress. The researchers showed that camel milk plays an important role and reduces the effects of oxidative stress by adjusting the antioxidant enzymes and nonenzymatic antioxidant materials levels and improves psychological symptoms 45). In a case report published in 2013, a boy had been introduced in the third year of his life to recognize autism. The mother of this boy started, from the age of nine years, to give him a glass of camel milk at night. He was observed for six years (2007–2013) to see if camel milk would control the symptoms of autism 46). This report agreed with the results reported by Y. Shabo 47) that camel milk is especially useful for autistic children (Autism Spectrum Disorder). Another clinical study investigated the effect of camel milk on biochemical markers. Forty-five children diagnosed with autism were randomly assigned to receive boiled camel milk for group I (n = 15), raw camel milk for group II (n = 15), and a placebo for group III (n = 15) for 2 weeks. Camel milk administered for 2 weeks significantly improved clinical symptoms of autism and decreased serum level of “thymus and activation-regulated chemokine” in autistic children 48).

Camel milk proved its potential effect in the treatment of food allergies. A study has investigated the effect of camel milk on children who were allergic to cow’s milk. Eight children who suffered from food allergies to different degrees participated in the study. They were only given camel milk to drink 49). It appeared that camel milk has a positive effect in children with severe food allergies. The reactions are rapid and long lasting. A study by El-Agamy 50) revealed that, when applying camel’s milk protein–specific antisera in immunoblotting analysis, there was no immunologic cross reactivity between camel and cow’s milk proteins. This study is laboratory work to obtain a better understanding of the competence of the greater camel of cow’s milk for food allergies in children. For this purpose, molecular and immunological similarities of milk were evaluated. Milk proteins of camels, cows, and humans, extracted by two different methods of electrophoresis, and were investigated. The results show that camel milk proteins can be used as a new protein source for food allergies 51).

These findings revealed that camel milk is safer for children and may be effective in the treatment of Autism Spectrum Disorder and improves general well-being. Also, the numerous nutrients in camel milk help to promote the body’s natural defenses and thus can be considered as a good source of protein, calcium, phosphorus, vitamin C, and niacin and can meet part of the daily nutritional needs of humans. However, more large clinical trials are needed to support these findings. The researchers hope that these reports for pediatricians will lead to increased research on camel milk and its uses for children.