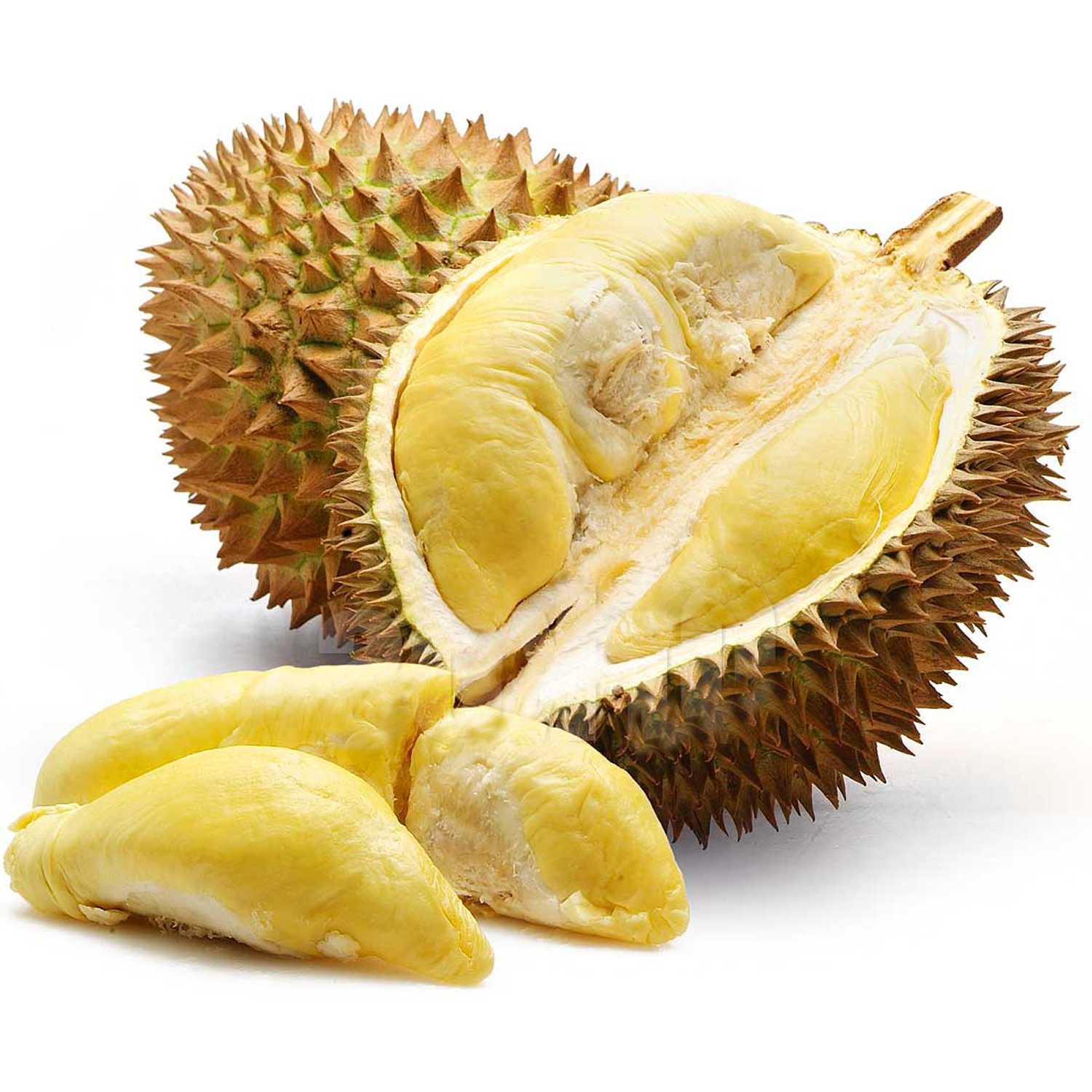 The durian is the fruit of several tree species belonging to the genus Durio (Durio zibethinus). There are 30 recognised Durio species, at least nine of which produce edible fruit, and over 300 named varieties in Thailand and 100 in Malaysia 1). Durio zibethinus is the only species available in the international market: other species are sold in their local regions.

The word durian came from the Malay word “duri” which means “thorn.” Durian is regarded by many people in southeast Asia as the notorious “king of fruits”, the durian is distinctive for its large size, strong odor, and formidable thorn-covered rind. The aroma of durian contain at least 44 odor-active compounds 2). Among the highly volatile potent odor-active compounds screened by gas chromatography are hydrogen sulfide (rotten egg), acetaldehyde (fresh, fruity), methanethiol (rotten, cabbage), ethanethiol (rotten, onion), and propane-1-thiol (rotten, durian). People tend to avoid and not eat durian fruit because of the smell !

Some people regard the durian as having a pleasantly sweet fragrance, whereas others find the aroma overpowering with an unpleasant odor. The smell evokes reactions from deep appreciation to intense disgust and has been described variously as rotten onions, turpentine, and raw sewage. The persistence of its odor, which may linger for several days, has led to the fruit’s banishment from certain hotels and public transportation in Southeast Asia. By contrast, the nineteenth-century British naturalist, Alfred Russel Wallace, described its flesh as “a rich custard highly flavoured with almonds”. Durian in its thawed state, the flesh is somewhat creamy and custard-like. If the flesh is frozen, it tastes similar to durian-flavored ice cream. The flesh can be consumed at various stages of ripeness, and it is used to flavor a wide variety of savory and sweet desserts in Southeast Asian cuisines. The seeds can also be eaten when cooked.

The fruit can grow as large as 30 centimetres (12 in) long and 15 centimetres (6 in) in diameter, and it typically weighs one to three kilograms (2 to 7 lb). Its shape ranges from oblong to round, the colour of its husk green to brown, and its flesh pale yellow to red, depending on the species.

The durian is native to Brunei, Indonesia and Malaysia 3). There is some debate as to whether the durian is native to the Philippines, particularly the Davao region in the island of Mindanao, or was introduced. The durian is grown in other areas with a similar climate; it is strictly tropical and stops growing when mean daily temperatures drop below 22 °C (72 °F) 4). Although the durian is not native to Thailand, the country is currently one of the major exporters of durians, growing 781,000 tonnes of the world’s total harvest of 1,400,000 tonnes in 1999. 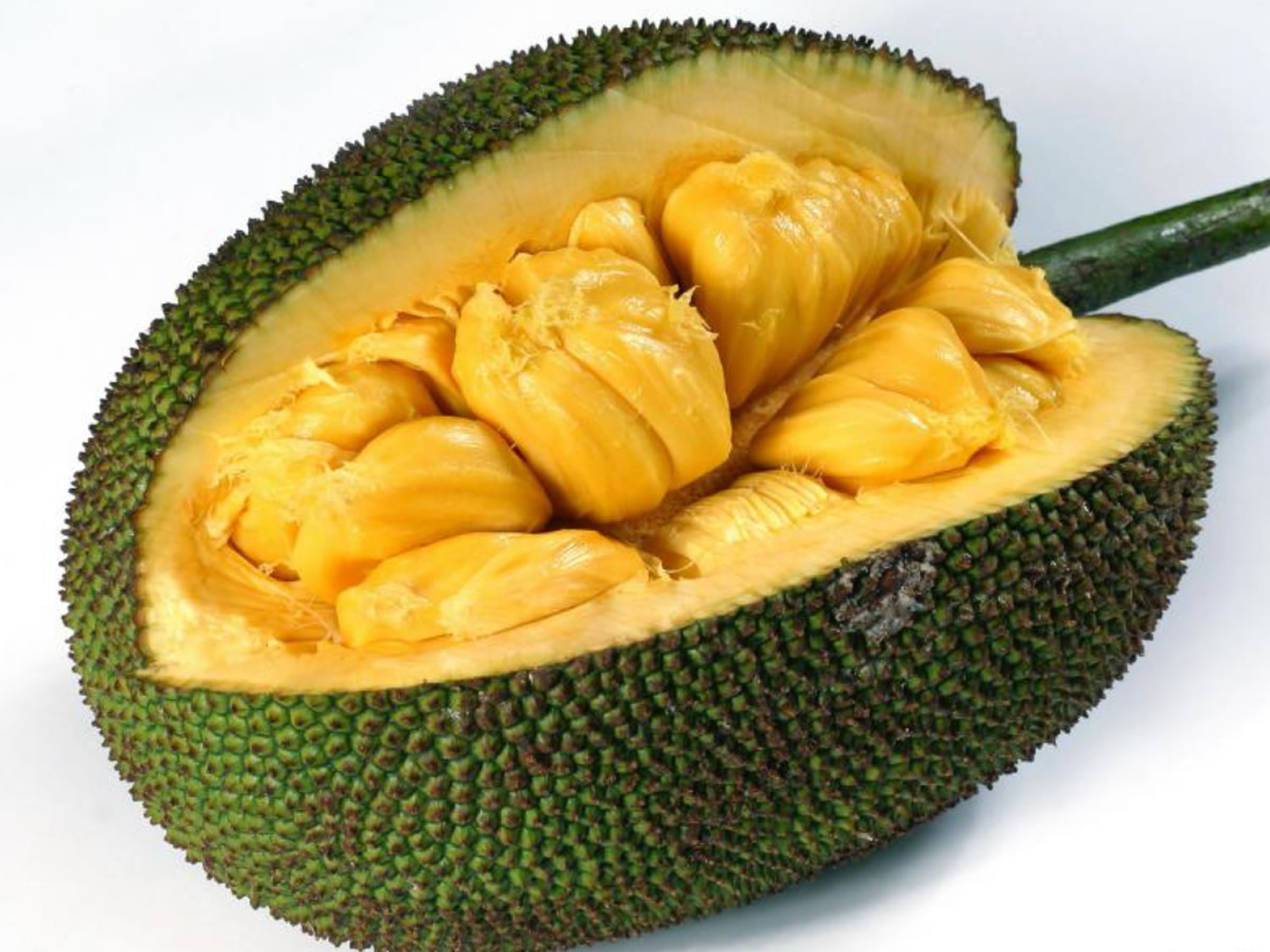 The jackfruit, (Artocarpus heterophyllus Lam) is a species of tree in the fig, mulberry, and breadfruit family (Moraceae) native to Western Ghats in India and is widely prevalent throughout the Southeast Asian region 5). Numerous varieties of jackfruit are found around the world and the fruit is usually divided into two categories, soft or firm. The fruit carpel, or section, can be colored from off-white to yellow to dark orange. There are also reports of red-fleshed jackfruit.

Jackfruit have a distinctive sweet and fruity aroma. In a study of flavor volatiles in five jackfruit cultivars, the main volatile compounds that were detected were ethyl isovalerate, propyl isovalerate, butyl isovalerate, isobutyl isovalerate, 3-methylbutyl acetate, 1-butanol, and 2-methylbutan-1-ol 6). A fully ripe and unopened jackfruit is known to “emit a strong aroma,” with the inside of the fruit described as smelling of pineapple and banana 7). After roasting, the seeds may be used as a commercial alternative to chocolate aroma 8).

Thousands of value-added products can be made from jackfruit seeds as well as ripe and half-ripe pulp. In India and other parts of Asia and the South Pacific, the half-ripe fruit is commonly cooked into curries, soups, and stews. It can be pickled, dried, and canned. Vacuum-dried jackfruit chips are sold widely in Southeast Asia in sealed bags as a snack. It is also used as flavoring for ice cream or made into pudding, gum, and beverages. The seeds are usually boiled and eaten as a snack, although in South India they are often dried and milled into flour used for dosa or confections. This gluten-free seed flour can serve as a substitute for wheat for those with specific food allergies. Leaves are used for cooking and wrapping foods, and the wood is used for utensils, fencing, fodder, and fuel.

Jackfruit is rich in phenolic compounds such as flavonoids, stilbenoids and arylbenzofurons 9). The extracts and metabolites of jackfruit particularly those from leaves, bark, stem and fruit possess several useful bioactive compounds and recently additional data are available on exploitation of these compounds in the various biological activities including antibacterial, antitubercular, antiviral, antifungal, antiplatelet, antiarthritic, tyrosinase inhibitory and cytotoxicity 10). Several pharmacological studies of the natural products from Artocarpus have conclusively established their mode of action in treatment of various diseases and other health benefits.

In 100 grams, raw or fresh frozen durian provides 33% of the Daily Value (DV) of thiamin (vitamin B1) and moderate content of other B vitamins, vitamin C and the dietary mineral, manganese (15–24% DV) (see Table 1).

Only a small number of studies have been conducted to explore the anti-diabetic and anti-obesity potential of durian and these studies show that durian can be further explored to detail its anti-diabetic and anti-obese potential 13). Durian exhibits potential effects on metabolic parameters in human and animal models 14), 15), 16). When rats were fed durian in addition to a cholesterol enriched diet (1% cholesterol), it positively influenced the plasma lipid profile, plasma glucose and antioxidant activity 17). These metabolically beneficial effects of durian might be due to the higher contents of bioactive compounds with various biological activities, such as metabolic enhancer and antioxidant. This suggests that durian consists of few critical bioactive components that can be further evaluated for hypoglycemic and anti-hyperlipidemic effects 18). Interestingly, in a small clinical trial, durian has been shown to improve glucose homeostasis by altering insulin secretion and its action 19). After ingestion of durian, the insulin response curve of 10 diabetic patients was significantly improved compared to the ingestion of other fruits (mango, pineapple, banana, rambutan) and control (no fruit) 20). Various durian cultivars have also been shown to possess anti-oxidant capacities due to the relatively high level of total polyphenols 21). This anti-oxidant property of durian and its components can be useful for prevention of oxidative stress mediated induction of diabetic and obesity complications. Studies delineating the anti-inflammatory properties of durian are yet to be reported. Although preliminary research of the durian fruit demonstrate fairly promising anti-diabetic and anti-obesity effects, in-depth studies are essential to solidify durian and identify specific components that can be used as therapeutic complements to combat diabetes, obesity and their associated metabolic derangements.