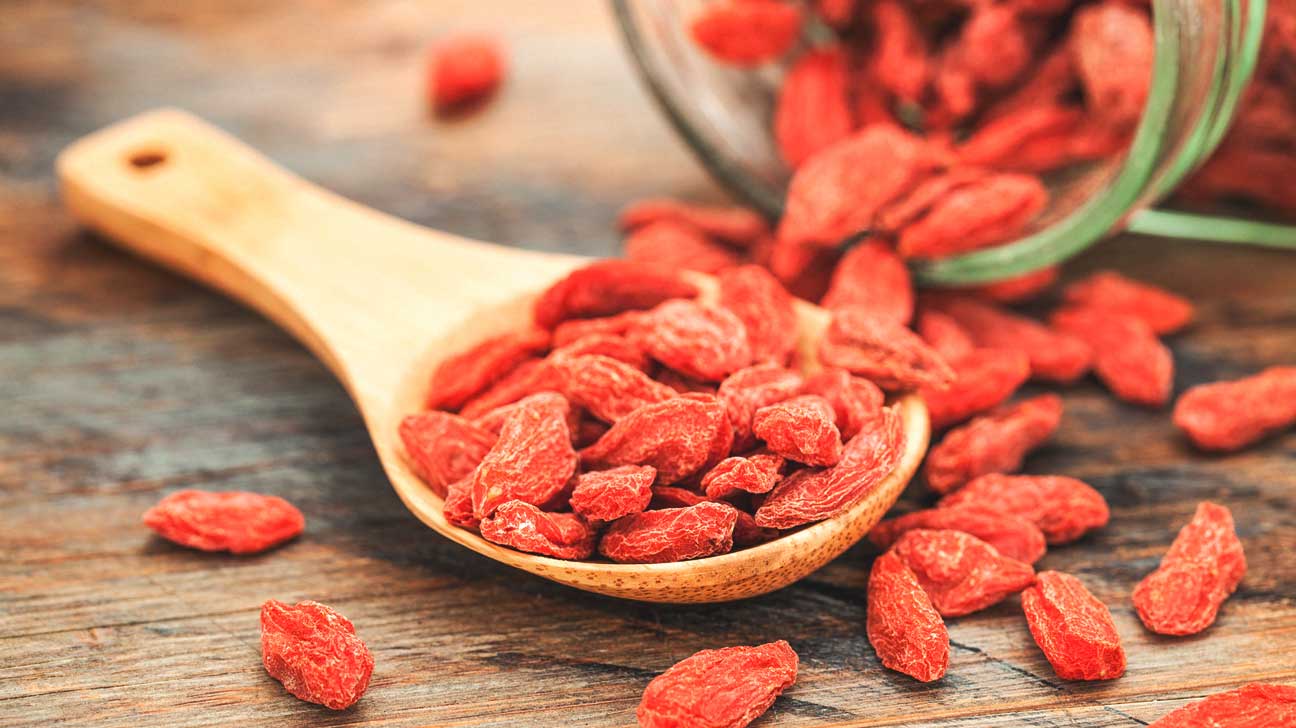 What is a Goji Berry

The goji berry (Lycium barbarum), also called the wolfberry, is a bright orange-red berry that comes from a shrub that’s native to China. The berries of Lyciumpic barbarum, a perennial plant native to Asia and southeastern Europe, have been used for over 6,000 years in traditional Chinese medicine to treat poor vision, anemia, inflammation, liver, and kidney ailments and cough 1), 2). They are also consumed as food and used in soup recipes.

Goji berries have gained immense popularity in the United States over the past decade because of its antioxidant properties. It is available in health food stores and is marketed via the Internet in juice form, typically blended with the juices of other berries and fruits. A wide range of health benefits, including cancer prevention and treatment, have been claimed for lycium.

These festive red berries have a sweet, slightly-sour taste and often come in dried form, like raisins. Goji berries are most commonly sold dried, although there are now goji berry juices and extracts. In Asia, goji berries have been eaten for generations in the hope of living longer.

Over time, people have used goji berries to try to treat many common health problems like diabetes, high blood pressure, fever, and age-related eye problems. Goji berries are eaten raw, cooked, or dried (like raisins) and are used in herbal teas, juices, wines, and medicines.

What Are the Benefits of Goji Berries ?

A general inspection of the literature suggests that berries, such as cranberries and goji berries, are efficacious in the treatment of urinary tract infection and seasonal influenza, respectively. Recent study on wild blueberries has shown that they possess protective effect against cardiovascular disease. In addition, other berries have been reported to possess the ability to inhibit cervical cells, modulate postprandial glucose and insulin responses. However, there is a need to address the issue of safety, efficacy, and interactions of berries intake with other dietary components. Also, more research studies should be focused on the influence of biotechnology on the functionality of berries.

Goji berries are a good source of vitamins and minerals, including:

Goji berries pack healthy food energy into small servings. Their rich, sweet taste, along with their high fiber content, can help you stay on track with eating healthy. Turn to them for a light snack to prevent overindulgence at mealtime. Add them in your yogurt or salad in the same way you would use raisins. Their nutrition value as a low-calorie, low-sugar option makes them a perfect substitute to other dried fruits with higher sugar content. A one ounce serving of goji berries has only 23 calories. Goji fruit are also a good source of polysaccharides, which ferment in the large intestine and provide energy to healthy bacteria.

The bulk of the data on goji berries (lycium barbarum) is from in vitro and animal studies. Human data are limited to observational studies. No clinical trials to validate goji berries as a cancer treatment have been conducted. Despite the lack of substantial scientific evidence, goji -containing juices are marketed as cancer cures. Many brands do not indicate the amount of lycium present in the products.

Lutein and zeaxanthin are carotenoids found in the retina, and dietary intake of these compounds has been shown to have antioxidant properties and to improve pigment density in the macula. This pigment protects the cells in the macular area by absorbing excess blue and ultraviolet light and neutralizing free radicals. Lutein and zeaxanthin are usually found together in food.

The retina, especially the macula, is thought to be an environment of high oxidative stress, meaning that there is an abundance of free radicals—molecules that damage proteins and DNA within cells. Antioxidants fight free radicals and are thought to help protect the retina from this damage.

A 15-day regimen of goji berry juice supplementation had no effect on visual acuity in healthy young adults 3).

Diabetic retinopathy is one of the most common microvascular complications of diabetes and remains a major cause of preventable blindness worldwide 4). Diabetes damages all the major cells of the retina and pigment epithelial cells 5). This results in increased blood flow and capillary diameter, proliferation of the extracellular matrix and thickening of basal membranes, altered cell turnover (apoptosis, proliferation), and breakdown of the blood retinal barrier Retinal pigment epithelial cell apoptosis is an early event in diabetic retinopathy. Taurine is reportedly beneficial for diabetic retinopathy and is abundant in the fruit goji berry (Lycium barbarum).  This study 6) has demonstrated for the first time that the traditional Chinese medicine Lycium barbarum is cytoprotective against high-glucose cytotoxicity in retinal pigment epithelial cells. The effects of the goji berry extract are closely mimicked by taurine at concentrations present in the extracts.  They concluded that taurine, a major component of Lycium barbarum (Goji Berry), and the Goji Berry extract, have a cytoprotective effect against glucose exposure in a human retinal epithelial cell line and may provide useful approaches to delaying diabetic retinopathy progression.

Age-related macular degeneration is a primary cause of vision loss in the elderly, negatively impacts quality of life, and raises the risk of clinical depression, falls, hip fractures, and placement in nursing homes 7), 8), 9). The prevalence of Age-related macular degeneration ranges from 1.5% in people older than 40 years to >15% in women older than 80 years 10), 11). The number of AMD diagnoses is expected to almost double by 2020.4 Unfortunately, there is no cure for AMD and current treatment options have limited effectiveness and introduce significant patient risk.

Goji berry is purported to benefit vision because of its high antioxidant (especially zeaxanthin) content, although this effect has not been demonstrated in high-quality human studies. A double-masked, randomized, placebo-controlled trial in healthy elderly subjects (range, 65 to 70 years) was conducted to evaluate the effects of supplementation with a proprietary milk-based formulation of goji berry, Lacto-Wolfberry on macular characteristics and plasma zeaxanthin and antioxidant capacity levels in elderly subjects 12). Both plasma zeaxanthin level and antioxidant capacity increased significantly in the lacto goji berry, by 26% and 57%, respectively, but did not change in the placebo group. The conclusion was daily dietary supplementation with goji berry for 90 days increases plasma zeaxanthin and antioxidant levels as well as protects from hypopigmentation and soft drusen accumulation in the macula of elderly subjects. However, the mechanism of action is unclear, given the lack of relationship between change in plasma zeaxanthin and change in macular characteristics.

You should avoid adding goji berries to your diet or speak to your health care provider  if you :