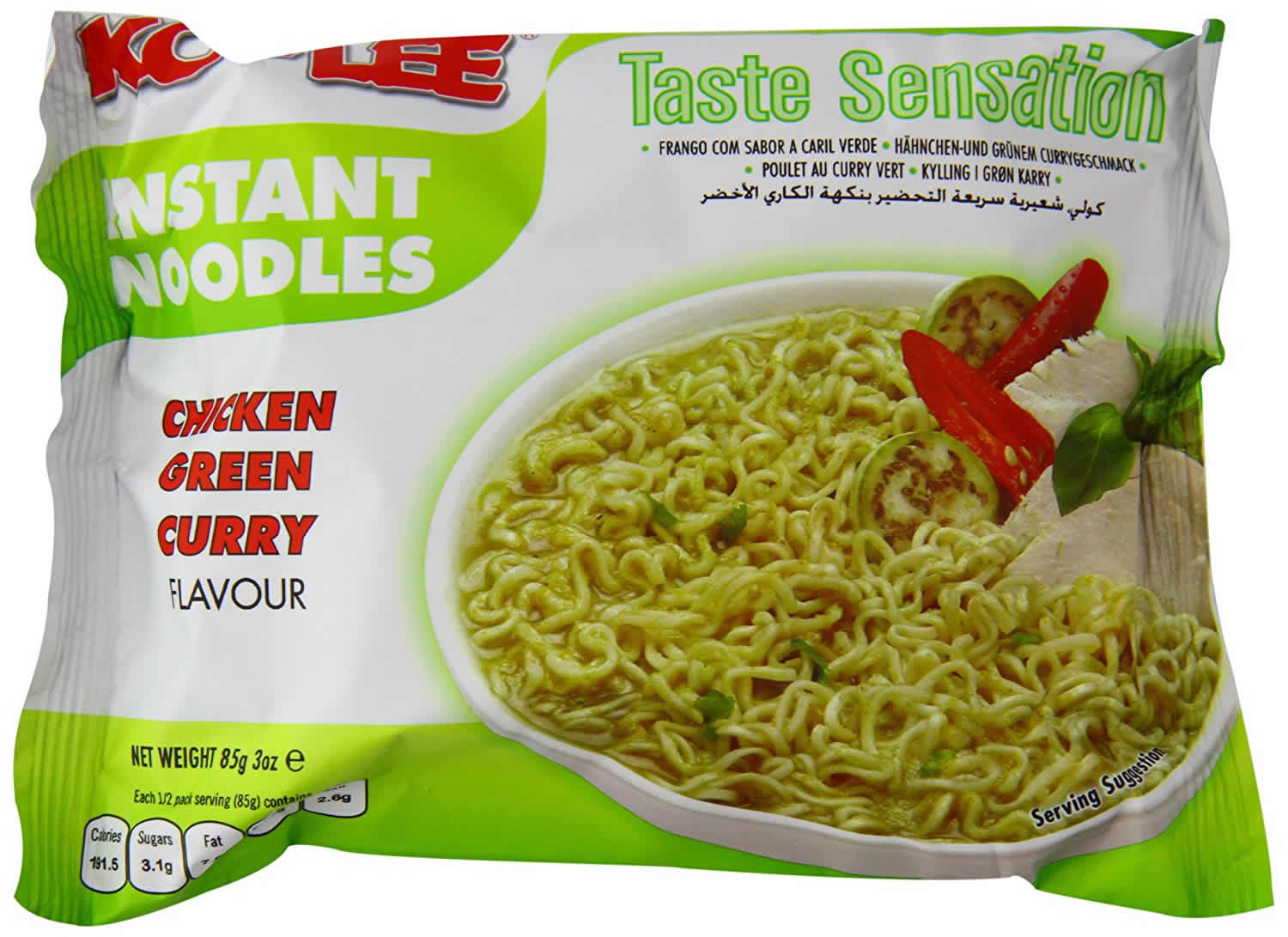 Are instant noodles bad for you ?

Over consumption of instant noodles has recently received special attention, owing to its association with obesity and cardiometabolic syndrome among adults in South Korea 1). By using International Diabetes Federation criteria 2), metabolic syndrome was defined as abdominal obesity (waist circumference ≥90 cm in men and ≥80 cm in women) plus any 2 of the following components: 1) elevated blood pressure (systolic blood pressure ≥130 mm Hg or diastolic blood pressure ≥85 mm Hg or antihypertensive medication use), 2) low HDL “good” cholesterol [fasting HDL cholesterol <40 mg/dL (0.4 g/L) in men and <50 mg/dL (0.5 g/L) in women], 3) hyperglycemia [fasting glucose ≥100 mg/dL (1 g/L) or antidiabetic medication use (insulin or oral agents) or physician-diagnosed diabetes], and 4) hypertriglyceridemia [fasting triglycerides ≥150 mg/dL(1.5 g/L)]. In addition, high LDL “bad” cholesterol was defined as fasting LDL cholesterol ≥130 mg/dL (1.3 g/L). The high-calorie content and the high concentration of refined carbohydrates, fats, and sodium 3) in instant noodles, contribute to an increased risk of metabolic disease 4). Consumption of instant noodles as a staple food source is rising in many Asian countries 5) but South Korea is ranked the world’s number one per capita in instant noodle consumption (72.8 servings of instant noodles per annum) 6). A recent survey 7) reported that college students consume instant noodles more frequently than adults in other age groups because of the convenience of preparing instant noodles on school premises.

Instant noodles are categorized into two types, “Fried noodles” and “Non-fried noodles,” depending on dehydration method.

Noodles in a metal mold are fried in the oil at 140-160˚C for a minute or two. Moisture content of the dough is reduced from a 30-40% level to a 3-6% level, and pregelatinization is accelerated in this process.

This is literally noodles that are not fried in oil. Noodles in a metal mold are put into an air-drier and dehydrated with hot air at approximately 80˚C for more than 30 minutes. The noodles made with this method are “air-dried noodles.”

The fact that college students with unhealthy dietary habits frequently eat instant noodles and may be at increased risk of negative health outcomes should receive special attention because of a recent survey that reported an increasing trend of early premature cardiovascular diseases death among adults as young as 20-49 years of age in Korea 14). There is also an increasing trend in the proportion of individuals in the same group of young adults with increased cardiometabolic risk factors, such as overweight or obesity, hypertension, and elevated blood levels of glucose and lipids 15).

Analysis of dietary data collected in the Korean National Health and Nutrition Examination Survey (KNHANES) III, 2005, identified that consumers of instant noodles, compared to people who did not consume instant noodles, had significantly higher intakes of energy, fat, sodium, thiamine, and riboflavin and lower intakes of protein, calcium, phosphorus, iron, potassium, vitamin A, niacin, and vitamin C 16). Analysis from KNHANES IV (2007–2009) demonstrated that the consumption of instant noodles two or more times per week was associated with a higher prevalence of metabolic syndrome in women and that this association was independent of major dietary patterns 17). 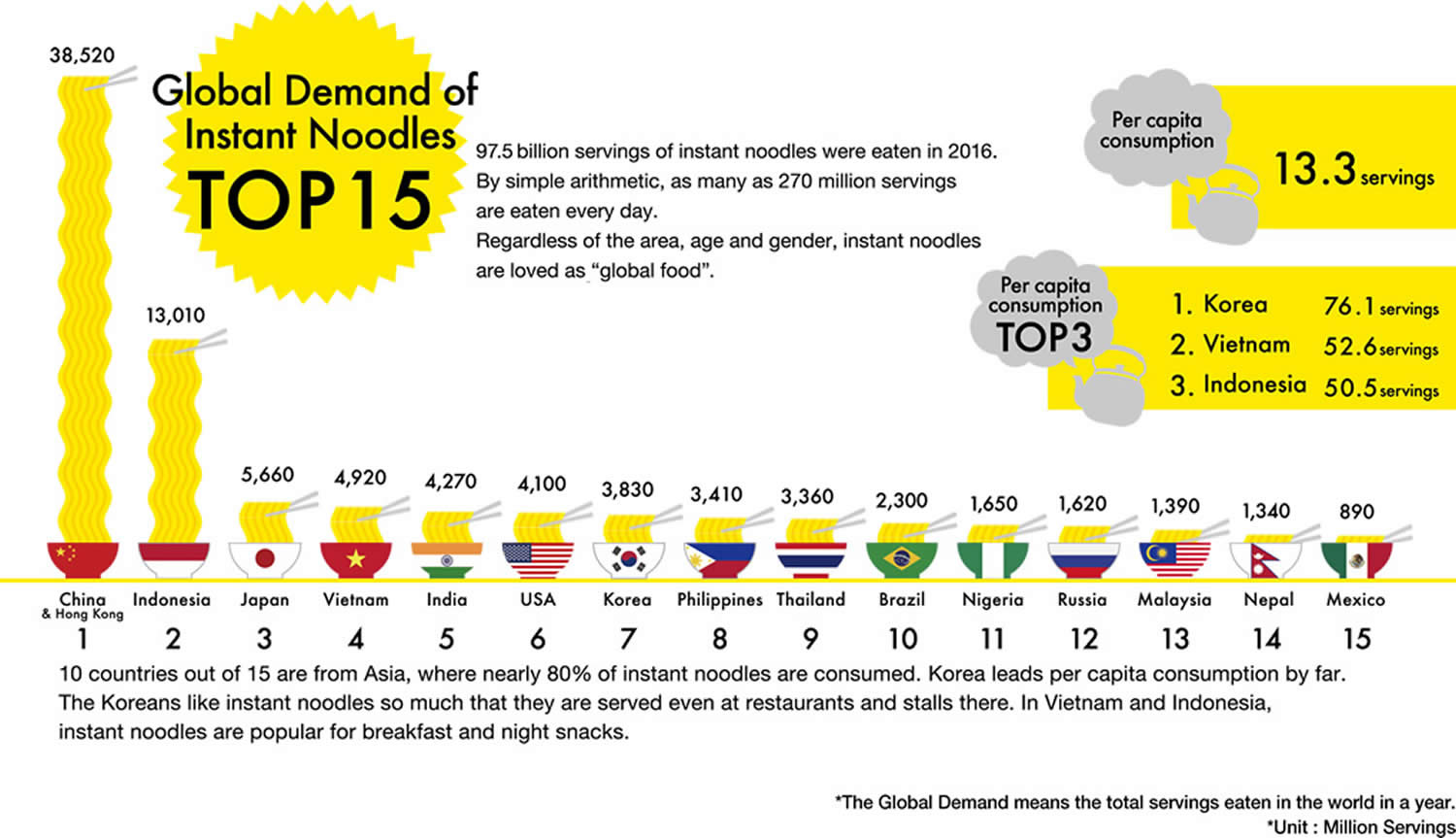 Researchers at Harvard University reported a 68% higher risk of metabolic syndrome among women who consume instant noodles ≥ twice/week 19), but not in men. They found that frequent consumption of instant noodles was associated with increased diastolic blood pressure in women. These gender discrepancies might result from differences in food group compositions in the dietary intake patterns between males and females 20) and the biological differences between males and females, such as sex hormones and metabolism 21). Previous authors suggested an interaction between bisphenol A and the estrogen receptor, as a possible contributor to the gender difference. Bisphenol A is known to be a selective modulator of estrogen receptors that can accelerate adipogenesis 22). Considering that women may be more sensitive to instant noodle-associated metabolic changes is intriguing. Whether this is due to bisphenol A found in packaging or to other substances in instant noodles, warrants further investigation. Meanwhile, it is advisable to guide young women to minimize their instant noodle consumption to decrease future cardiovascular disease metabolic risk.

This study 23), the researchers found a positive association between the frequency of instant noodle consumption and plasma triglyceride levels, diastolic blood pressure, and fasting blood glucose levels in Korean college students. Study subjects with a higher frequency of instant noodle consumption were more likely to have multiple cardiometabolic risk factors. The association between an exposure and an outcome for hypertriglyceridemia was significantly higher in the group that consumed instant noodles ≥ 3 times/week compared to the group with the lowest consumption frequency (≤ 1 time/month) 24). This association existed in male and female students respectively, as well as in the combined subjects.

Cardiovascular disease is the number one cause of death worldwide 28), responsible for 17.5 million deaths in 2012. High salt intake raises blood pressure, a major risk factor for cardiovascular disease. Reducing population salt intake is recognized as a best way for prevention and control of non-communicable diseases by lowering blood pressure and reducing risk of strokes and heart disease 29). Salt reduction is considered a priority intervention by the World Health Organization (WHO) due to its high feasibility and potential to benefit to the whole population. Many countries are working towards achieving the global target of a 30% relative reduction in mean population salt intake by 2025, towards the WHO recommendation of <5,000 milligrams/day 30). However, The American Heart Association recommends no more than 2,300 milligrams (mgs) a day and an ideal limit of no more than 1,500 mg per day for most adults 31). 1 teaspoon salt = 2,300 mg sodium

In the study 32), diastolic but not systolic blood pressure was increased, according to the frequency of instant noodle consumption and the effect was more apparent in female students. Diastolic blood pressure is considered an index of salt sensitivity 33). Instant noodles made in Korea contain a significant amount of sodium in one serving (600-2,770 mg) 34). According to the Korea National Health and Nutrition Examination Survey 35), noodles are one of the main sources of sodium intake in Korea, and instant noodles comprised the largest proportion of noodles eaten by South Korean adults in their 20s. If diastolic blood pressure is an index of salt sensitivity, the data indicate a gender difference in salt sensitively, such that women may be more salt-sensitive than men 36). This needs to be verified though further studies.

Although there was no difference in the proportion of subjects with metabolic syndrome between groups, students with a higher frequency of instant noodle consumption were more likely to have multiple cardiometabolic risk factors. Significant differences were observed in the proportion of subjects with two risk factors (17.7 vs. 27.6%) and three or more risk factors (0.7 vs. 2.5%), and between those who consumed instant noodles ≤ 1 time/month vs. ≥ 3 times/week. Our findings suggest that instant noodle consumption might be associated with the presence of multiple risk factors, even if metabolic syndrome has not yet manifested because the study subjects consisted of relatively young individuals.

Generally one serving of instant noodles has 300-500kcal.

The main components of instant noodles are wheat flour, starch, water, salt, fat and kansui (an alkaline mixture of sodium carbonate, potassium carbonate and sodium phosphate), and other ingredients are added to improve the texture and flavour of the noodles 41).

Additives are used for instant noodles

Listed below are typical additives used in noodles.

Guar gum and Xanthane gum, protein made from wheat and soybeans are used to enhance the noodle texture and elasticity as well as flavor. Kansui is used to give the noodles unique features of Chinese noodles.

This additive is polysaccharide to increase viscosity and smoothness. Algin acid and pectin, etc., extracted from seaweeds, beans, apples, oranges are used as viscosity stabilizers.

Emulsifiers spread oil and fat evenly and stabilize the product quality. Typically, plant lecithin, which can be produced in the refining process of soybean oil is used.

Vitamin E used as an antioxidant to prevent oxidation of oil and fat contained in noodles. This can be produced in the refining process of soybean oil. This is not a preservative.

To maintain noodle color constant, gardenia dye gained by heating saccharides such as glucose and sugar, and carotene extracted from carrot are used.

For the purpose of nutrient enrichment, the nutrients such as Vitamin B1, Vitamin B2, calcium, etc. are added. Instant noodle are often fortified with calcium, a nutrient many people lack in daily life.

Kansui is an alkaline mixture of sodium carbonate, potassium carbonate and sodium phosphate. Kansui is an indispensable component for instant noodles. Not only does it provide viscous elasticity, it also adds a special flavor specific to Chinese noodles. In China kansui originally meant water containing wood ashes or mineral rich well water, however now it referrers to the water containing one or more of the following―potassium carbonate, sodium carbonate, sodium hydrogen carbonate, and potassium or sodium in the phosphate group. Kansui develops the flavonoid color to a light yellow. Approximately 0.1-0.2g of kansui is used in instant noodles of 100 g, but 0.3-0.6g in case of non-fried noodles. With alkaline pH value at 7-8, it enhances flavor coupled with soup.