Is kimchi good for you? 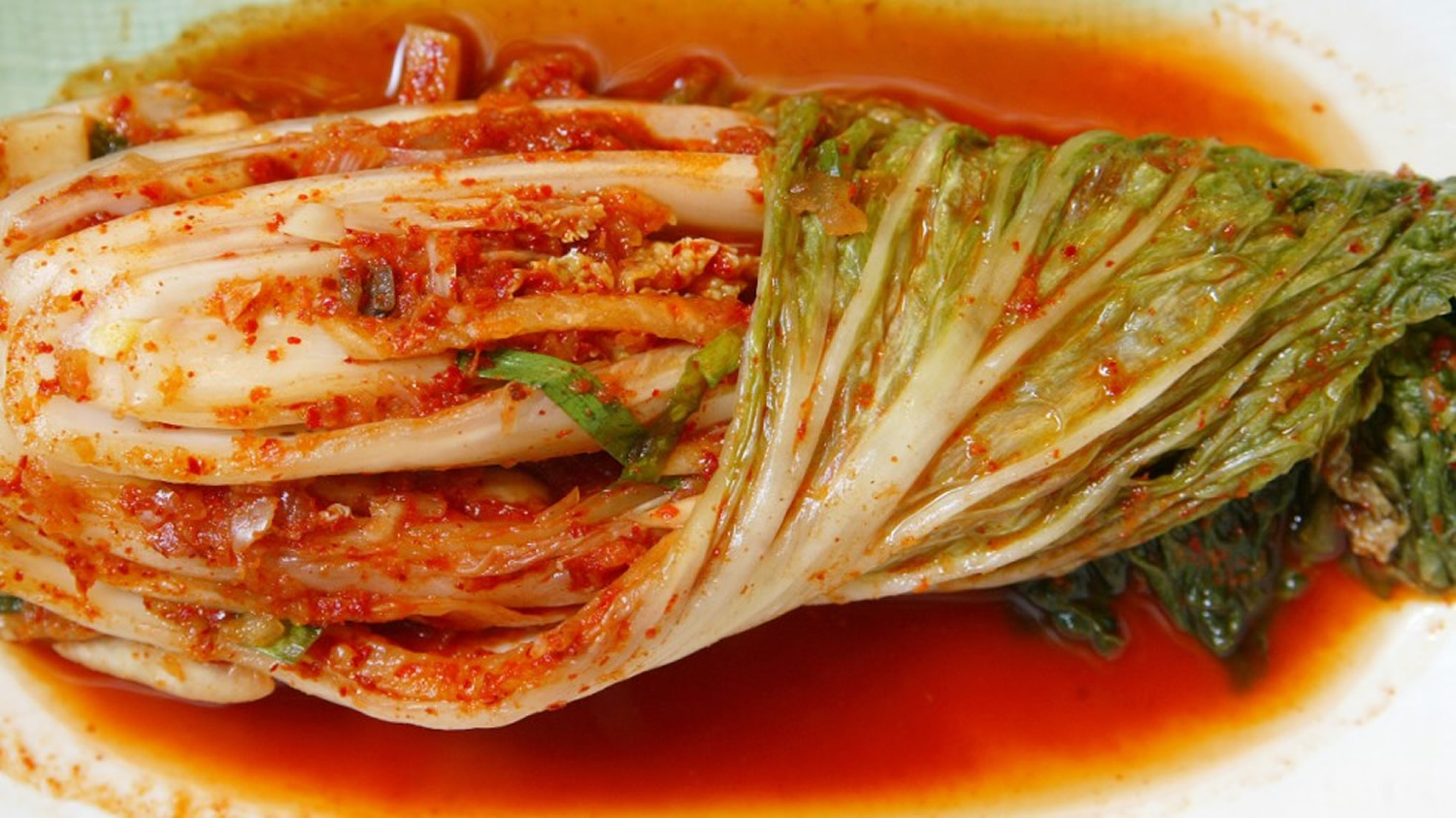 Kimchi is a traditional fermented vegetable, a staple in Korean cuisine and is an indispensable side dish of every meal in Korea 1). Moreover, the annual tradition Gimjang involves preparing and storing a large quantity of kimchi for the winter season 2). There are about 187 kinds of Kimchi according to the ingredients and processing methods 3). Kimchi is prepared by various ingredients, such as Chinese cabbage (Brassica pekinensis Rupr.), processed with seasoning mixture mainly consisting of red pepper (Capsicum annuum L.) powder, garlic, ginger, edible Allium varieties other than garlic, and radish in the presence of salt. These ingredients may be chopped, sliced and broken into pieces 4). Kimchi is then fermented in brine before or after being packaged into appropriate containers to ensure the proper ripening and preservation of the product by lactic acid production at low temperatures. The drained weight of the final product, as a percentage of the indicated weight, should be not less than 80% by weight, calculated on the basis of the weight of distilled water at 20 °C which the sealed container will hold when completely filled. The drained weight of the final product as a percentage by the indicated weight shall not be less than 80% by weight. Kimchi is currently recognized worldwide as a nutritious and healthy food 5).

Nutritionally, Kimchi is a low-calorie food (15 kcal/100 g) and an important source of vitamins, minerals, and fiber 21). It is also a good source of phytochemicals (e.g., β-sitosterol, glucosinolates, isothiocyanate, indoles, allyl compounds) and probiotic strains (e.g., Lactobacillus plantarum, Lactobacillus brevis, Leuconostoc mesenteroides) 22). In regard to these nutrition properties, many functional properties of Kimchi have been reported including anti-oxidative activity 23), anti-mutagenic and anti-tumor activities 24), anti-atherogenic activity 25) and weight-controlling activity 26).

In Korea, where the aging of population is rapidly increasing and westernized lifestyle is becoming more prevalent, cardiovascular disease and metabolic syndrome–related diseases such as type two diabetes mellitus are becoming important public health issues. In fact, during the last two decades, crude mortality from ischemic heart disease dramatically increased for men (10.3-fold increase), and women (17.5-fold increase), and diabetes-related mortality was also increased four times for men and six times for women 28). These tendencies are shown throughout the world. Therefore, many trials to prevent or decrease the prevalence of these degenerative diseases have been performed with modification of environmental factors such as dietary patterns and screening for biologically effective compounds from foods.

Numerous studies have reported on the lipid-lowering mechanisms of kimchi or its ingredients such as Chinese cabbage, hot red pepper, garlic, green leek, and ginger 42). β-sitosterol in Chinese cabbage, S-methlycysteinsulfoxide and S-allylcysteinsulfoxide in garlic, capsaicin in red pepper are known bioactive compounds present in kimchi ingredients responsible for lowering blood lipids 43). β-Sitosterol, a phyto-cholesterol, competes with dietary cholesterol in the intestine for absorption 44). Sulfur compounds in onion and garlic stimulate lipolysis by elevating the hormone secretion such as adrenalin and glucagon, or suppressing enzyme activities responsible for cholesterol synthesis. Acetyl-CoA synthetase and/or 3-hydroxy-3-methyl-glutaryl CoA reductase activity was inhibited by allin or allicine 45). Capsaicin stimulates the secretion of plasma cholesterol to extra-circulation as bile via elevating 7α-hydroxylase activity 46). It also increases energy expenditure by regulating thyroid hormone secretion 47). Additionally, lactic acid bacteria produced during the fermentation of kimchi are believed to contribute to the cholesterol lowering activity. Lactobacillus acidophilus usually detected in kimchi can bind the cholesterol in their cell wall besides decomposing the cholesterol for assimilation and de-conjugates the bile acids 48). In previous study, kimchi effectively attenuated plasma cholesterol levels in rats and rabbits fed high cholesterol diets 49). In addition, hypercholesterolemic rabbits administered bioactive compound of kimchi, 3-(4′-hydroxyl-3′,5′-dimethoxyphenyl)propionic acid (HDMPPA) showed a drop in plasma cholesterol and LDL “bad” cholesterol within 4 days of treatment 50). These results supported the findings that kimchi supplementation to young adults for a short period could alleviate serum cholesterol concentration 51). In another study 52), kimchi consumption significantly lowered the fasting blood glucose concentration according to amount of kimchi intake. There are several considerations about the lowering effect of kimchi on fasting blood glucose. Compared with energy and carbohydrate intake between pre- and post-test, these two factors showed no difference in the two groups. Furthermore, in a previous questionnaire for physical activity, 36% and 27% subjects in the low and high group answered “no extra exercise”, respectively. These data suggested that a relatively greater reduction of fasting blood glucose or plasma lipids in the high group could be related with intake of kimchi 53).

Focusing on the effect of fermentation, this study 54) hypothesized that consumption of fermented kimchi would have more beneficial effects compared with that of fresh kimchi on metabolic parameters that are related to cardiovascular disease and metabolic syndrome risks in overweight and obese subjects. Twenty-two overweight and obese patients with body mass indexes greater than 25 kg/m² were randomly assigned to two 4-week diet phases separated by a 2-week washout period (crossover design). During each diet phase, the subjects consumed either fresh or fermented kimchi. Anthropometric data showed significant decreases in body weight, body mass index, and body fat in both groups, and the fermented kimchi group showed a significant decrease in the waist-hip ratio and fasting blood glucose. Net differences in the systolic blood pressure, diastolic blood pressure, percent body fat, fasting glucose, and total cholesterol in the fermented kimchi group were significantly greater than those in the fresh kimchi group. There was also a tendency for a decrease in fasting insulin after consumption of fermented kimchi. Therefore, the ingestion of fermented kimchi had positive effects on various factors associated with metabolic syndrome, including systolic and diastolic blood pressures, percent body fat, fasting glucose, and total cholesterol, compared with the fresh kimchi. These results suggest that the maturity of kimchi (fresh vs fermented) may affect obesity, lipid metabolism, and inflammatory processes 55).

In a previous study, 3-(4′-hydroxyl-3′,5′-dimethoxyphenyl)propionic acid (HDMPPA), an active principle in cabbage kimchi 61), demonstrated anti-atherogenic activity in terms of preventing the fatty streak formation or atherosclerosis in rabbits 62). Among the possible mechanisms, it was suggested that HDMPPA suppressed transcription rate for the enzymes responsible for the production of reactive oxygen species and also inhibited adhesion molecule expression whereas endothelial nitric oxide synthase activity in the aorta was elevated 63). In a human study, kimchi consumption exerted favorable plasma lipid lowering effects and improved metabolic syndrome parameters in obese people 64).

According to the Lee et al. 67), suppressor T lymphocyte cells and Natural killer cells are increased with Lactobacillus casei and Bifidobacterium longumi treatment. However, another study 68), T-helper cells and suppressor T cells were not affected by the consumption of Kimchi. T lymphocyte cells play central roles in the immune system, in which their major function assisting B lymphocyte cells in the production of antibodies. Serum Ig (immunoglobulin) levels are routinely measured in clinical practice to examine immune balance. Typical ranges are suggested (Ig A; 1.4-0.4 mg/mL, Ig G; 8-16 mg/mL, and Ig M; 0.5-2.0 ng/mL). Low levels of Ig were observed in humoral immunodeficiency, while high levels of Ig were observed in chronic inflammatory diseases. Until now, many studies showed that Kimchi inhibited Ig E levels in the NC/nga mice atopic animal model [24,25]. Also, lactobacillus plantarum isolated from Kimchi increased the production of Ig A in normal or S180-bearing BALB/C tumor-induced mouse 69). On the other hand, 4 weeks of Kimchi supplementation does not changes of Ig A, Ig G or Ig M 70).

Gut microbiota dysbiosis plays a key role in the pathogenesis of inflammatory bowel disease (IBD). Much research has focused on the use of gut microbiota for the treatment of inflammatory bowel disease (IBD). Probiotics, live microorganisms that benefit host health, are commonly used to control chronic gastrointestinal inflammation in inflammatory bowel disease (IBD) patients. Lactobacillus and Bifidobacterium species are widely used as probiotics 71). Administration of Lactobacillus plantarum ameliorates the severity of colitis in IL-10-knockout mice 72). Lactobacillus paracasei isolated from kimchi, reduces colitis disease by decreasing the number of Th1 (IFN-γ or Interferon gamma) cells and macrophages in the lamina propria 73). Treatment with Lactobacillus acidophilus reduces the STAT3 and phosphorylated STAT3 levels in colon tissue from mice with Dextran sulfate sodium (DSS)-induced colitis and increases the number of Treg cells among intestinal intraepithelial and lamina propria lymphocytes in a 2,4,6-trinitrobenzene sulfonic acid-induced colitis model 74). Treatment with Bifidobacterium longum ameliorates colorectal colitis in rats by altering the methylation level of the Foxp3 promoter, resulting in an increased number of Treg cells 75). Moreover, Streptococcus thermophilus suppresses bacterial translocation, which reduces gastrointestinal bleeding and weight loss 76). Treatment with lactobacilli and bifidobacteria promoted recovery of Dextran sulfate sodium (DSS)-induced intestinal injury and inflammation in a mouse model of colitis 77). Lactobacillus casei and Bifidobacterium lactis ameliorated injury to the intestinal mucosa and liver in a 2,4,6-trinitrobenzene sulfonic acid-induced colitis model 78). Also, treatment with a probiotic combination that included lactobacilli, bifidobacteria, and streptococci reduced the levels of proinflammatory cytokines in colitis 79).

Cytokines, protein mediators produced by immune cells, are involved in immune regulation. The levels of pro-inflammatory cytokines are increased in chronic inflammatory diseases while the levels of anti-inflammatory cytokines are decreased. Kim et al. 80) showed that the consumption of fermented Kimchi (300 g/day for 4 weeks) had no effects on the levels of Tumor Necrosis Factor-α (TNF-α) and Interleukin 6 (IL-6) in overweight and obese patients (22 subjects, mean age of 38.6 ± 8.5 years). In another study 81), the levels of TNF-α and IL-6 were significantly decreased in the Kimchi and non-Kimchi groups. It is unclear why the levels of pro-inflammatory cytokines in the non-Kimchi group were decreased. The study author 82) postulated the decreased levels of TNF-α and IL-6 in placebo group may be due to the use of radish. Because of these conflicting results more research are needed before any opinion can be formed regarding the effects of kimchi on the immune system (e.g., immune stimulating activity).