Is sourdough bread good for you 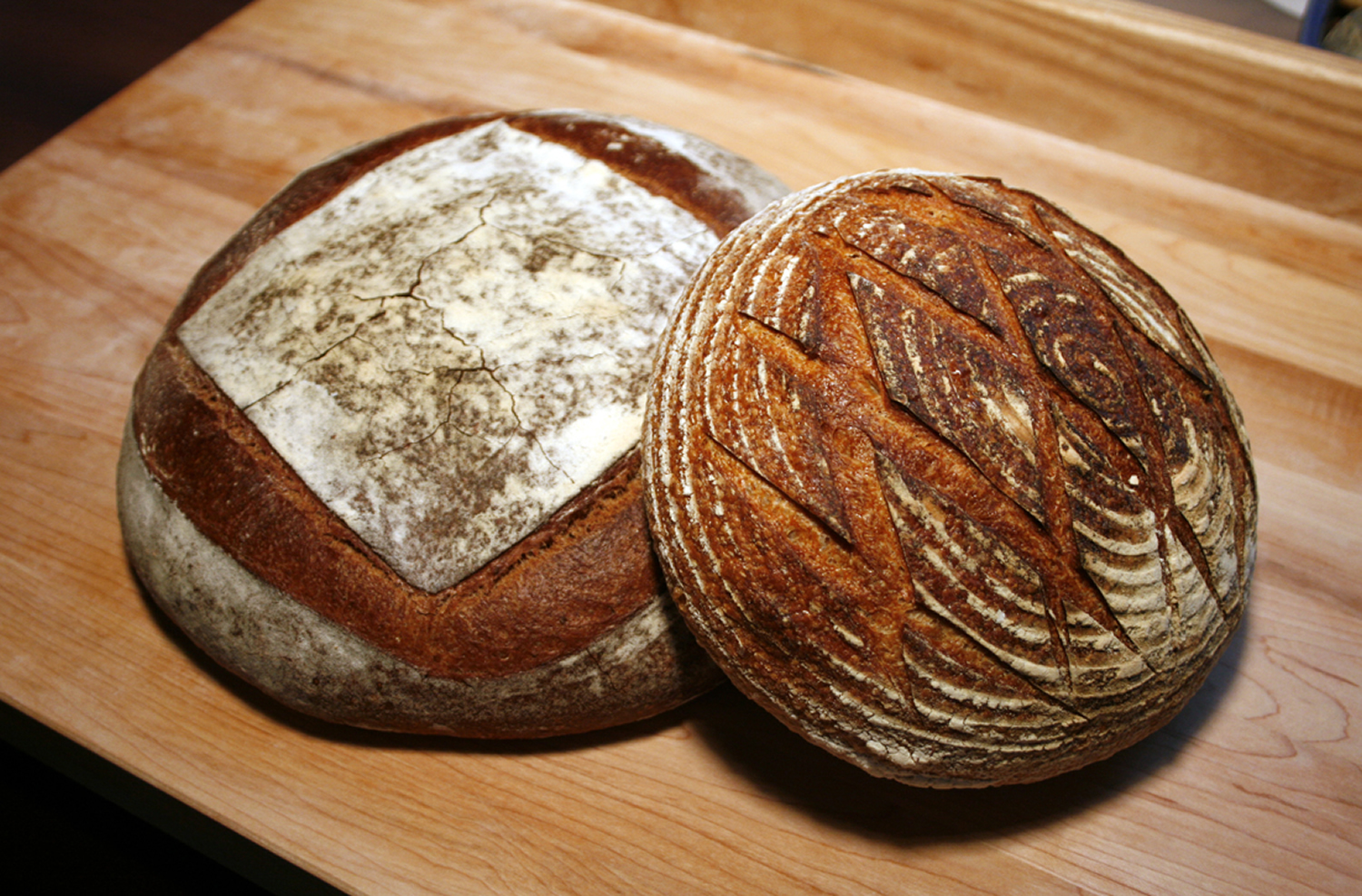 What is sourdough bread

Sourdough bread is made by the fermentation of dough using naturally occurring lactobacilli and yeast 1). Sourdough bread has a mildly sour taste not present in most breads made with baker’s yeast and better inherent keeping qualities than other breads, due to the lactic acid produced by the lactobacilli.

Sourdough is a dough containing a Lactobacillus culture in symbiotic combination with yeasts. It is one of the principal means of biological leavening in bread baking, the others using cultivated forms of yeast. It is important in baking rye-based breads, where yeast does not produce comparable results 2).

One of the oldest sourdough breads dates from 3700 BC and was excavated in Switzerland, but the origin of sourdough fermentation likely relates to the origin of agriculture in the Fertile Crescent several thousand years earlier. Bread production relied on the use of sourdough as a leavening agent for most of human history; the use of baker’s yeast as a leavening agent dates back less than 150 years 3). Sourdough remained the usual form of leavening down into the European Middle Ages until being replaced by barm from the beer brewing process, and then later purpose-cultured yeast 4).

Bread made from 100% rye flour, popular in the northern half of Europe, is usually leavened with sourdough. Baker’s yeast is not useful as a leavening agent for rye bread, as rye does not contain enough gluten. The structure of rye bread is based primarily on the starch in the flour, as well as other carbohydrates known as pentosans; however, rye amylase is active at substantially higher temperatures than wheat amylase, causing the structure of the bread to disintegrate as the starches are broken down during cooking. The lowered pH of a sourdough starter, therefore, inactivates the amylases when heat cannot, allowing the carbohydrates in the bread to gel and set properly 5). In the southern part of Europe, where panettone was originally made with sourdough, sourdough has become less common in recent times; it has been replaced by the faster-growing baker’s yeast, sometimes supplemented with longer fermentation rests to allow for some bacterial activity to build flavor.

French bakers brought sourdough techniques to Northern California during the California Gold Rush, and it remains a part of the culture of San Francisco today. Sourdough has long been associated with the 1849 gold prospectors, though they were more likely to make bread with commercial yeast or baking soda 6). The San Francisco sourdough is a white bread characterized by a pronounced sourness, and indeed the strain of lactobacillus in sourdough starters is named Lactobacillus sanfranciscensis, alongside the sourdough yeast Candida milleri found in the same cultures 7).

There are many breads that use techniques similar to that used in the making of sourdough bread. Danish rugbrød (rye bread) is a dense, dark bread best known from its use in the Danish smørrebrød (open-faced sandwiches) 10). Amish friendship bread uses a sourdough starter that includes sugar and milk. It is also leavened with baking powder and baking soda. An Amish sourdough is fed with sugar and potato flakes every 3–5 days. German pumpernickel is traditionally made from a sourdough starter 11), although modern pumpernickel loaves often use commercial yeasts, sometimes spiked with citric acid or lactic acid to inactivate the amylases in the rye flour. Flemish desem bread (the word means ‘starter’) is a whole-wheat sourdough 12). In Azerbaijan, whole-wheat sourdough flatbreads are traditionally eaten 13). In Ethiopia, teff flour is fermented to make injera 14). A similar variant is eaten in Somalia, Djibouti, and Yemen (where it is known as lahoh) 15). In India, idlis and dosa are made from a sourdough fermentation of rice and vigna mungo 16).

Traditional San Francisco sourdough is a Type I sourdough 17). Type I sourdoughs are generally firm doughs 18), have a pH range of 3.8 to 4.5, and are fermented in a temperature range of 20 to 30 °C (68 to 86 °F). Lactobacillus sanfranciscensis was named for its discovery in San Francisco sourdough starters, though it is not endemic to San Francisco. Lactobacillus sanfranciscensis and L. pontis often highlight a lactic-acid bacterial flora that includes L. fermentum, L. fructivorans, L. brevis, and L. paralimentarius 19). The yeasts Saccharomyces exiguus, Candida milleri, or Candida holmii 20) usually populate sourdough cultures symbiotically with Lactobacillus sanfranciscensis 21). The perfect yeast S. exiguus is related to the imperfect yeasts C. milleri and C. holmii. Torulopsis holmii, Torula holmii, and S. rosei are synonyms used prior to 1978. C. milleri and C. holmii are physiologically similar, but DNA testing established them as distinct. Other yeasts reported found include C. humilis, C. krusei, Pichia anomaola, C. peliculosa, P. membranifaciens, and C. valida 22). There have been changes in the taxonomy of yeasts in recent decades 23). L. sanfranciscensis requires maltose 24), while C. milleri is maltase negative and thus cannot consume maltose 25). C. milleri can grow under conditions of low pH and relatively high acetate levels, a factor contributing to sourdough flora’s stability 26).

In order to produce acetic acid, L. sanfrancisensis needs maltose and fructose 27). Wheat dough contains abundant starch and some polyfructosanes, which enzymes degrade to “maltose, fructose and little glucose” 28). The terms “fructosan, glucofructan, sucrosyl fructan, polyfructan, and polyfructosan” are all used to describe a class of compounds that are “structurally and metabolically” related to sucrose, where “carbon is stored as sucrose and polymers of fructose (fructans)” 29). Yeasts have the ability to free fructose from glucofructans which compose about 1–2% of the dough. Glucofructans are long strings of fructose molecules attached to a single glucose molecule. Sucrose can be considered the shortest glucofructan, with only a single fructose molecule attached 30). When L. sanfrancisensis reduces all available fructose, it stops producing acetic acid and begins producing ethanol. If the fermenting dough gets too warm, the yeasts slow down, producing less fructose. Fructose depletion is more of a concern in doughs with lower enzymatic activities 31).

A Belgian study of wheat and spelt doughs refreshed once every 24 hours and fermented at 30 °C (86 °F) in a laboratory environment provides insight into the three-phase evolution of first-generation-to-stable sourdough ecosystems. In the first two days of refreshment, atypical genera Enterococcus and Lactococcus bacteria highlighted the doughs. During days 2–5, sourdough-specific bacteria belonging to the genera Lactobacillus, Pediococcus, and Weissella outcompete earlier strains. Yeasts grew more slowly and reached population peaks near days 4–5. By days 5–7, “well-adapted” Lactobacillus strains such as L. fermentum and L. plantarum had emerged. At their peaks, yeast populations were in the range of about 1–10% of the lactobacilli populations or 1:10–1:100. One characteristic of a stable dough is that the heterofermentative have outcompeted homofermentative lactobacilli 32).

In Type II sourdoughs, baker’s yeast or Saccharomyces cerevisiae 35) is added to leaven the dough; L. pontis and L. panis highlight the flora 36). They have a pH less than 3.5, and are fermented within a temperature range of 30 to 50 °C (86 to 122 °F) for several days without feedings, which reduces the flora’s activity 37). This process was adopted by some in industry, in part, due to simplification of the multiple-step build typical of Type I sourdoughs.

In Type II sourdoughs, yeast growth is slowed or stopped due to higher fermentation temperatures. These doughs are more liquid and once fermented may be chilled and stored for up to a week. They are pumpable and used in continuous bread production systems 38).

Type III sourdoughs are Type II sourdoughs subjected to a drying process, usually either spray or drum drying, and are mainly used at an industrial level as flavoring agents. They are dominated by “drying-resistant [lactic acid bacteria] such as Pediococcus pentosaceus, Lactobacillus plantarum, and L. brevis.” The drying conditions, time and heat applied, may be varied in order to influence caramelization and produce desired characteristics in the baked product 39).

There is substantial interest in the role of dietary carbohydrate in preventing and managing type 2 diabetes 40). In North America, bread is the predominant carbohydrate-containing food, and consumption of white bread is 5 times that of whole wheat, rye, and other dark breads 41). Replacing white bread with whole-grain breads is often recommended to improve glycemic control 42). Epidemiologic studies have reported inverse associations between whole-grain consumption and the risk of type 2 diabetes and cardiovascular disease 43), 44), and clinical studies 45), 46) have reported beneficial effects of whole-grain consumption on the metabolic profile of subjects with impaired glycemic control. It has been suggested that the fiber content of whole-grain foods improves glucose/insulin metabolism by reducing the rate of carbohydrate breakdown and absorption 47), 48).

In an effort to identify a “healthier” bread, Mofidi and her colleagues 49) compare different breads effect on blood glucose, insulin response and insulin sensitivity in 12 obese or overweight men. The test breads were prepared to provide 50 g of available carbohydrate which required portions of 151 g for 11-grain (whole-grain, with sourdough culture), 157 g of sprouted-grain (whole-grain, with sourdough culture), 107 g of sourdough white, 122 g of 12-grain (whole-grain bread), and 110 g of white bread. Table 1 showed the five bread types used in her study and their nutrient compositions.

The test subjects (age: 53.9 ± 1.7 years) were overweight or obese males (body mass index (BMI): 25–35 kg/m2), nonsmokers and had no history of gastrointestinal disease, gluten allergy, dyslipidemia, or diabetes. Subjects did not take medications (with the exception of antidepressants and/or antihypertensives) or natural health products. Potential subjects were screened for glucose intolerance and diabetes at a prestudy visit using a standard 2 h oral glucose tolerance test (OGTT). Subjects were excluded if they had impaired fasting plasma glucose (>6.1 mmol/L), impaired glucose tolerance (>7.8 mmol/L at 2 h), or impaired fasting insulin (>90 pmol/L).