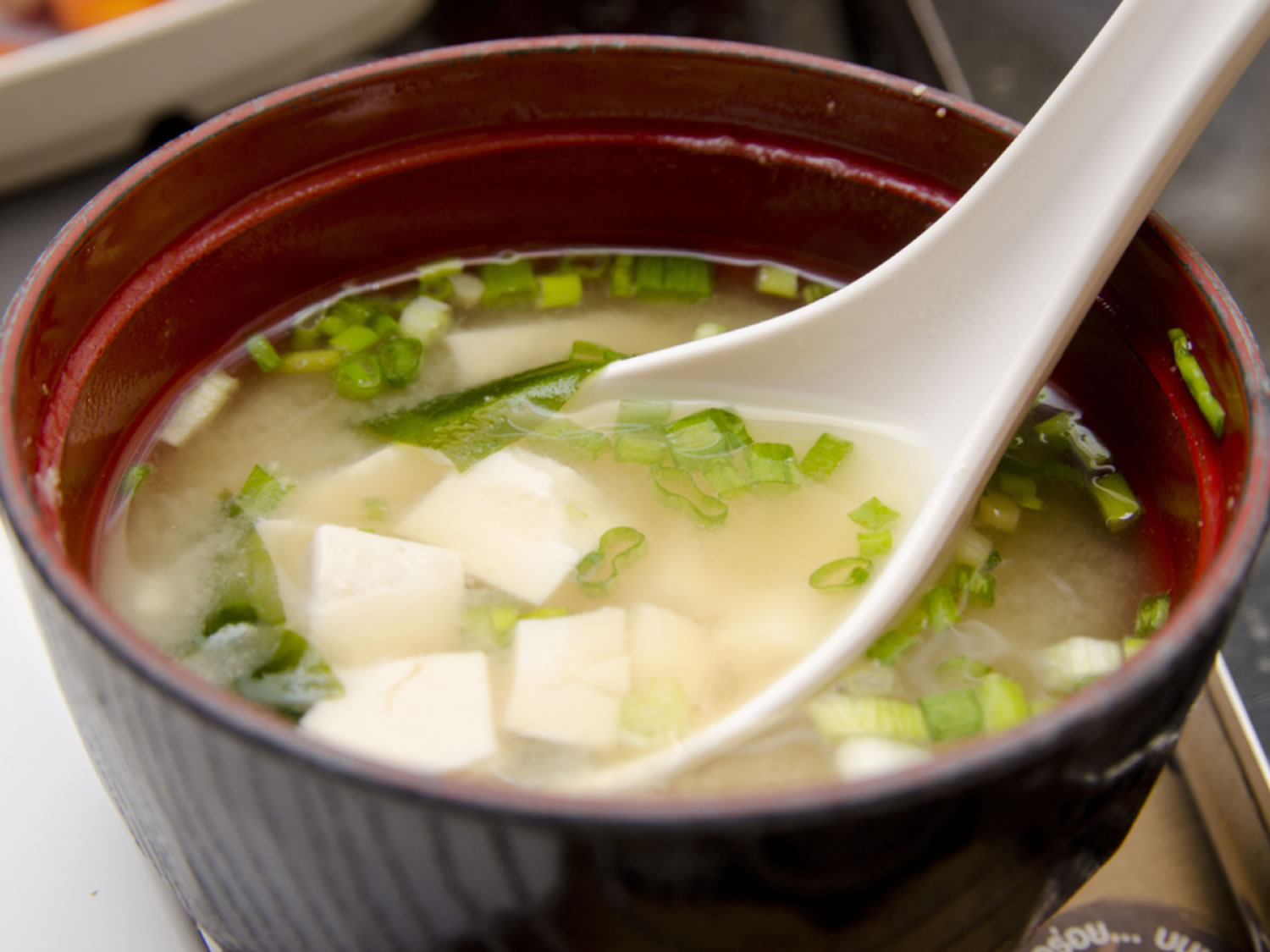 What is miso soup

Miso soup (misoshiru) is a traditional Japanese soup consisting of a stock called “dashi” into which softened miso paste (fermented soy bean paste) is mixed. Many ingredients are added depending on regional and seasonal recipes, and personal preference 1). Miso is fermented from a mixture of soybeans with rice, wheat or oats and contains vitamins, microorganisms, salts, minerals, plant proteins, carbohydrates, and fat 2). Saponin inhibiting lipid peroxides, trypsin inhibitor, isoflavones, lecithin, colin, prostaglandin E and others are additional substances 3). The most common dashi soup stocks for miso soup are made of niboshi (dried baby sardines), kombu (dried kelp), katsuobushi (thin shavings of dried and smoked bonito, aka skipjack tuna), or hoshi-shiitake (dried shiitake). The kombu can also be used in combination with katsuobushi or hoshi-shiitake. The kelp and/or shiitake dashi serve as a vegetarian soup stock.

No traditional Japanese meal is complete without miso. Miso is used on a daily basis as a flavor in soup and solid food in Japan and other parts of Asia and is an essential ingredient for Japanese cuisine. The miso paste is used as a seasoning for soups and a host of traditional dishes and has been a key ingredient Japanese diets for centuries. Miso originated in China, before finding its way into Japan in the 7th century where it was gradually transformed into intrinsically Japanese seasoning 4). In Japan, miso soup and white rice make up the central dishes of the traditional Japanese breakfast.

Figure 1. How miso is made

Outside Japan, American or European style miso soup is sometimes made by dissolving miso in a Western vegetable stock. The stock might include ingredients such as negi, carrot, potato and daikon radish. In some versions of the dish chicken stock, Western-style fish stock, and other non-dashi bases can even be used, but there is some debate over whether or not miso soups made using these non-traditional bases count as true misoshiru.

Gluten is the name given to the protein found in some, but not all, grains:

So the answer to the question is it depends what type of miso is being used in the making of miso soup.

If pork is added to miso soup, it is called tonjiru, meaning “pork soup”.

Miso soup can be prepared in several ways, depending on the chef and the style of soup. Japanese recipes usually call for most vegetables and meats to be cooked in the simmering dashi, particularly mushrooms, daikon, carrots, potatoes, tofu, and fish. The miso is suspended separately in some dashi stock removed from the simmering mix, to keep the miso paste from cooking, which alters the flavour, kills beneficial bacteria, and reduces the health benefits of biologically active miso paste. When the vegetables are cooked, the stock is removed from heat, the miso suspension is added and mixed into the soup, any uncooked ingredients are added, and the dish is served.

Generally, 1 bowl of miso soup contains 1 gram of salt and an increase in dietary salt intake is well known to contribute to the elevation of blood pressure 11). Reducing the consumption of miso soup and Japanese pickles may be an effective approach for decreasing the level of dietary salt intake in the general Japanese population 12). These results suggest the possibility that the habitual consumption of miso soup can lead to increased blood pressure. Furthermore, Anderson et al. 13) reported dietary sources of sodium in China, Japan, the United Kingdom, and the United States from the INTERMAP study and that the sodium intakes per day (systolic blood pressure mm) in these countries were 3,990 mg, 4,651 mg, 3,406 mg and 3,660 mg, respectively. In general, excessive sodium intake is a key factor in the epidemic of perhypertension/hypertension and is linked to increased risk of cardiovascular diseases. The American Heart Association recommends no more than 2,300 milligrams (mgs) a day and an ideal limit of no more than 1,500 mg per day for most adults 14). Average Americans eat more than 3,400 milligrams of sodium each day. More than 75 percent of the sodium Americans eat comes from some processed, prepackaged and restaurant foods – not from the salt shaker. Because the average American’s sodium intake is so excessive, even cutting back to no more than 2,400 milligrams a day will significantly improve blood pressure and heart health. The guideline to reduce to 1,500 mg doesn’t apply to people who lose big amounts of sodium in sweat, like competitive athletes, and workers exposed to major heat stress, such as foundry workers and fire fighters, or to those directed otherwise by their healthcare provider. If you have a medical conditions or other special dietary needs or restrictions, you should follow the advice of a qualified healthcare professional.

Here are the approximate amounts of sodium in a given amount of table salt:

In another study on miso soup consumption and breast cancer 18), in January 1990, 21 852 Japanese female residents (aged 40-59 years) from four public health center areas completed a self-administered questionnaire, which included items about the frequency of soy consumption. Through December 1999 and 209 354 person-years of follow-up, 179 women were diagnosed with breast cancer. Consumption of miso soup and isoflavones, but not of soyfoods, was associated with a reduced risk of breast cancer 19). What is unusual about this result is that isoflavones also known as phytoestrogens (daidzein, genistein, and glycitein) are active substances that have chemical structures similar to mammalian estrogens 20) are present in soy beans which is the main ingredients of miso or miso soup. Why is consuming miso soup isoflavones be any different to soy foods isoflavones? Other studies have shown soy 21), 22) may protect against chronic diseases. Convincing evidence indicates that the antiestrogenic, anticarcinogenic, anti-inflammatory, and antioxidative properties of isoflavones favorably influence the risk of several cancers in Asian countries as opposed to Western countries, where soy foods are typically not consumed in large amounts 23), 24). Given the low breast and prostate cancer mortality rates in soy food–consuming countries like Japan, investigations have understandably focused on these two hormone-dependent malignancies 25). The similar chemical structure of soybean and soy food isoflavones to that of the mammalian hormone estrogen gives these compounds an antiestrogenic effect and possibly, in turn, an anticarcinogenic effect 26). Several experimental studies have shown that genistein has a direct inhibitory effect on large-bowel cancer cell growth via its activation of estrogen receptor-β as well as blocking of tyrosine protein kinases and DNA topoisomerases. Other anticancer activities included a decrease in abnormal cellular proliferation and the induction of apoptosis and inhibition angiogenesis 27).