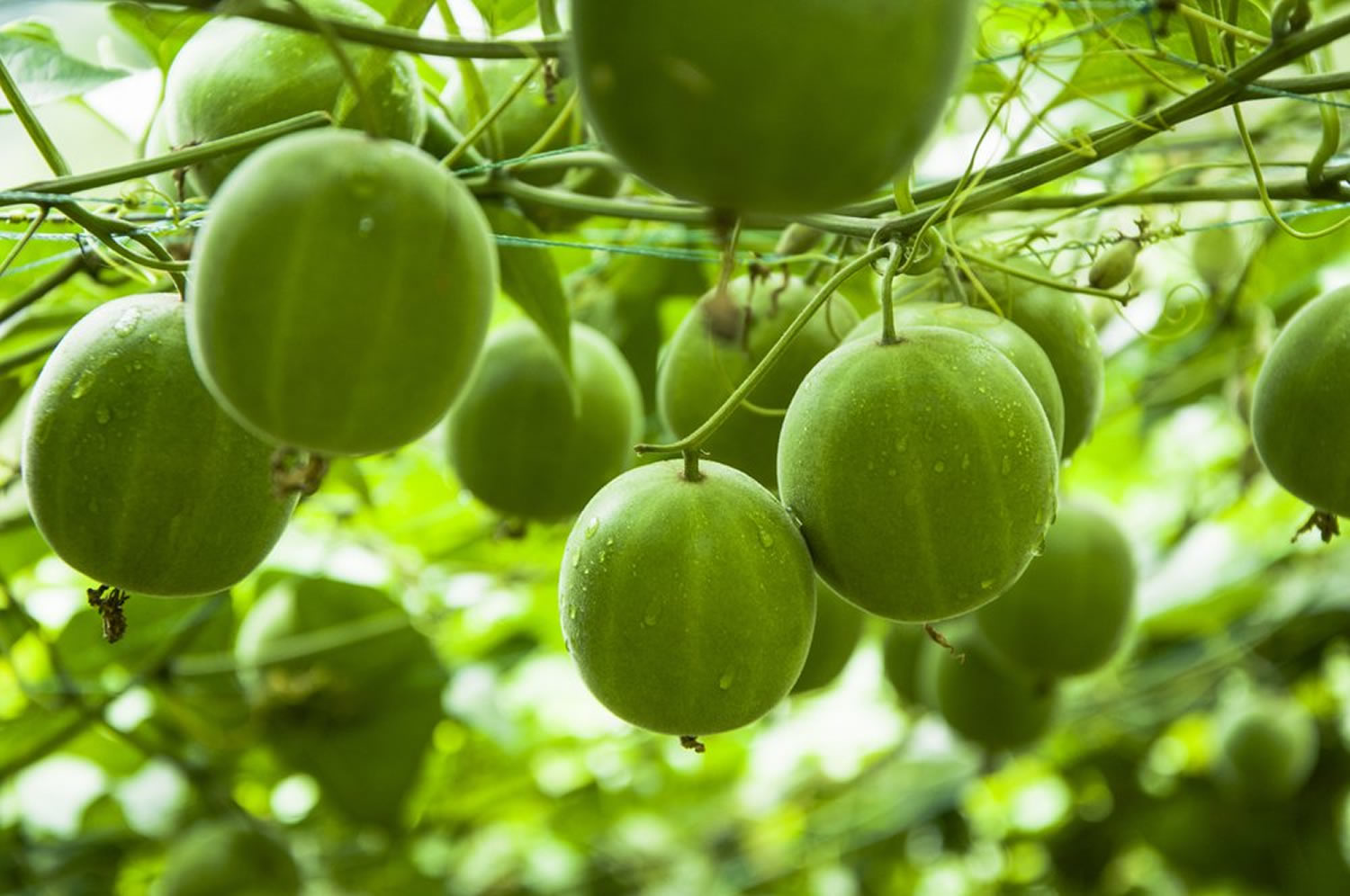 What is monk fruit

Monk fruit (luo han guo or siraitia grosvenorii) is a herbaceous perennial vine of the Cucurbitaceae (gourd) family, native to southern China and northern Thailand. Monk fruit contains a sweet, fleshy, edible pulp that is widely used in traditional Chinese medicine. The major bioactive constituents in the fruit extract are the cucurbitane-type triterpene saponins known as mogrosides. Among them, mogroside V is nearly 300 times sweeter than than sugar and has been used in China as a low-calorie sweetener for cooling drinks and in traditional Chinese medicine. The powdered extract of monk fruit (Nectresse and Luo Han Guo), a round green melon that grows in central Asia is heat stable and can be used in baking and cooking and is more concentrated than sugar (¼ teaspoon or 0.5 grams equals the sweetness of 1 teaspoon or 2.5 grams sugar). The US FDA approved monk fruit extract as generally recognized as safe (GRAS) as a food additive and table top sweetener 1). Luo han guo extract, which contains a higher concentration of the fruit’s sweet components (cucurbitane triterpene glycosides, known as mogrosides) was developed in the 1970s and 1980s, before commercial-scale production began in the 1990s for the Japanese market.

Sweetness is one of the fundamental human hedonic pleasures 2), even more reinforcing and attractive than drugs such as heroin and cocaine 3). However, in satisfying this desire, sugar consumption has risen exponentially from nearly 250 years ago and meta-analyses implicate sugar consumption in the development of obesity, diabetes, metabolic syndrome, and cardiovascular diseases 4). Noncaloric artificial sweeteners offer hope for calorie reduction and, although there has been a general acceptance of many of them as safe for consumption 5), recent research has pointed to effects of synthetic sweeteners on the intestinal microbiome, ironically leading to metabolic syndrome and glucose intolerance 6), 7). In light of the problems associated with both natural sugar and synthetic noncaloric sweeteners, there is great interest in developing alternative natural nonsugar sweeteners to satisfy the human “need” for sweet.

The active components responsible for the monk fruit sweetness are mogrosides, which are members of the family of triterpene glycosides. In studies the relationships of the structure and the taste, the number of glucose units at the 3 and 24-position of the aglycone moiety are thought responsible for the perception of taste 8). Among them, mogroside IV, V and mogroside VI which have more glucose units and are extremely sweet, but the fruit also contains some tasteless glycosides, as well as bitter-tasting glycosides such as mogroside III and mogroside II E which possess less glucose units 9). Previous research has indicated that the bitter mogroside II E and tasteless mogroside III are the main products in the fruit at the early growing stage, but these decrease as the fruit matures 10). The content of mogroside V increases rapidly from 50 to 70 days after flowering and levels off after 85 days after flowering 11).

What are Natural Sweeteners ?

First of all, we need to define what sweeteners are. Sweeteners are substances used to improve the palatability and shelf life of food products. Sweetness also balances bitterness, sourness, and saltiness. A preference for sweet taste is innate and sweeteners can increase the pleasure of eating.

Sweeteners can generally be divided into three types of sweeteners depending how there are made:

To make it even more complicated, sweeteners can be further divided into two categories based on their calorie content: 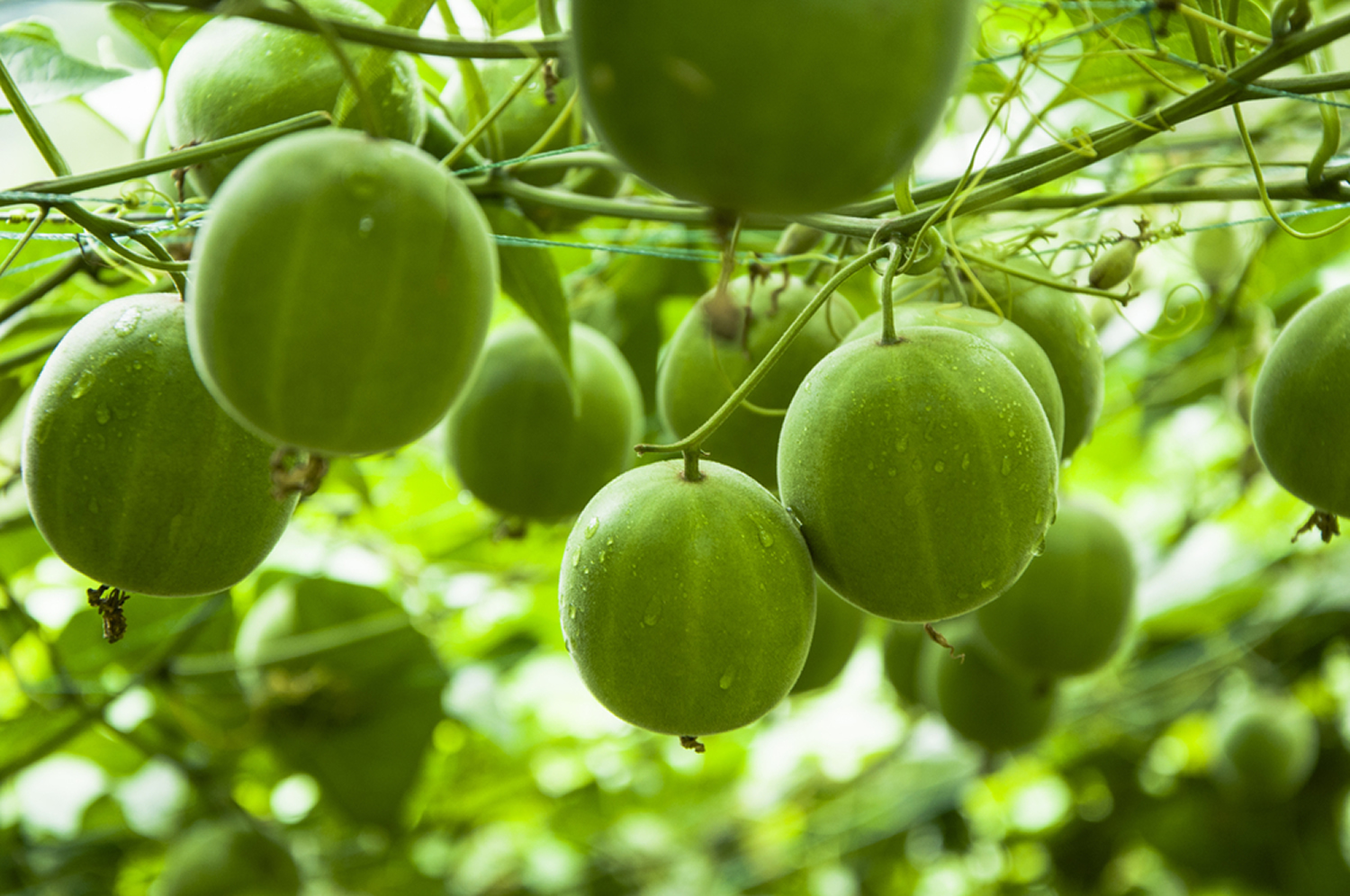 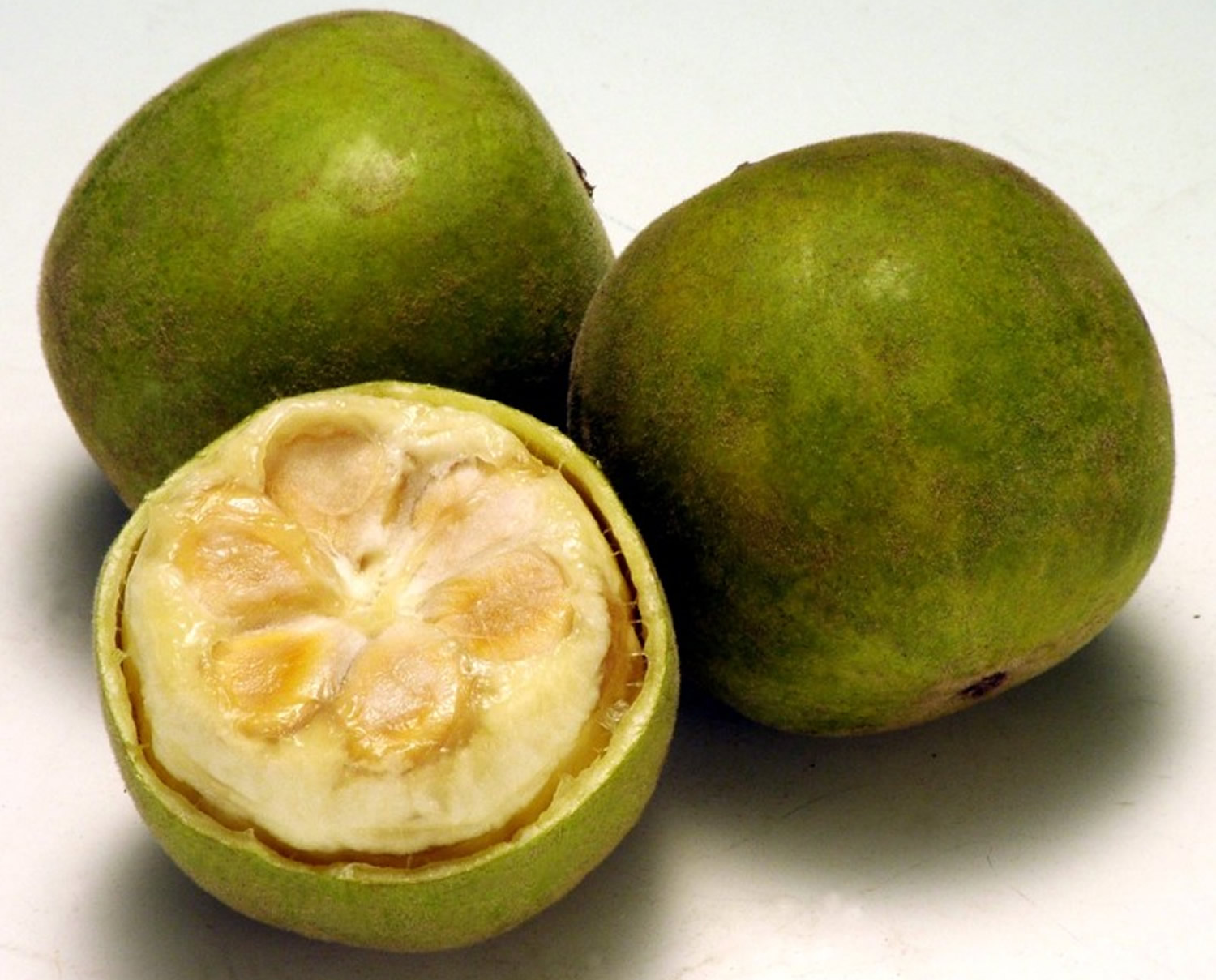 Stevia (Truvia, Pure Via, Sun Crystals, Rebaudioside A, Reb A, rebiana) is a non-caloric plant-based sweetener; made from the plant Stevia rebaudiana, which is grown for its sweet leaves; common names include sweetleaf, sweet leaf, sugarleaf, or simply stevia 19). In addition to stevioside several other sweet principles such as steviosides A and B, Steviobioside, Rebaudioside A, B, C, D, E
and Dulcoside A were isolated from Stevia rebaudiana leaf 20). FDA approved as generally recognized as safe (GRAS) as a food additive and table top sweetener only certain high purity steviol glycosides purified from the leaves of Stevia rebaudiana (Bertoni). Stevia is 150 to 200 times sweeter than sucrose (table sugar) 21).

Stevia (Stevia rebaudiana) is a bushy shrub that is native to northeast Paraguay, Brazil and Argentina 22). It is now grown in other parts of the world, including Canada and part of Asia and Europe. It is probably best known as a source of natural sweeteners.

Some people take stevia by mouth for medical purposes such as lowering blood pressure, treating diabetes, heartburn, high uric acid levels in the blood, for weight loss, to stimulate the heart rate, and for water retention.

The appropriate dose of stevia depends on several factors such as the user’s age, health, and several other conditions. At this time there is not enough scientific information to determine an appropriate range of doses for stevia. Keep in mind that natural products are not always necessarily safe and dosages can be important. Be sure to follow relevant directions on product labels and consult your pharmacist or physician or other healthcare professional before using.

Stevia and chemicals contained in stevia, including stevioside and rebaudioside A, are LIKELY SAFE when taken by mouth as a sweetener in foods 25). The U.S. Food and Drug Administration (FDA) has given the generally recognized as safe (GRAS) status for Rebaudioside A in the U.S. for use as a sweetener for foods 26). Stevioside has been safely used in research in doses of up to 1500 mg daily for 2 years.

In March 2010, the European Food Safety Authority (EFSA) concluded that the stevia sweeteners are not carcinogenic, genotoxic or associated with any reproductive/developmental toxicity and established an Acceptable Daily Intake (ADI) of 4 mg/kg body weight/day. Conservative estimates of steviol glycosides exposure, both in adults and in children, suggest that it is likely that the ADI would be exceeded at the maximum proposed use levels. The use of Stevia is now authorised in the European Union at appropriate levels for 31 different food categories including soft drinks, desserts, confectionary and table top sweeteners 27).

Some people who take stevia or stevioside can experience bloating or nausea. Other people have reported feelings of dizziness, muscle pain, and numbness. 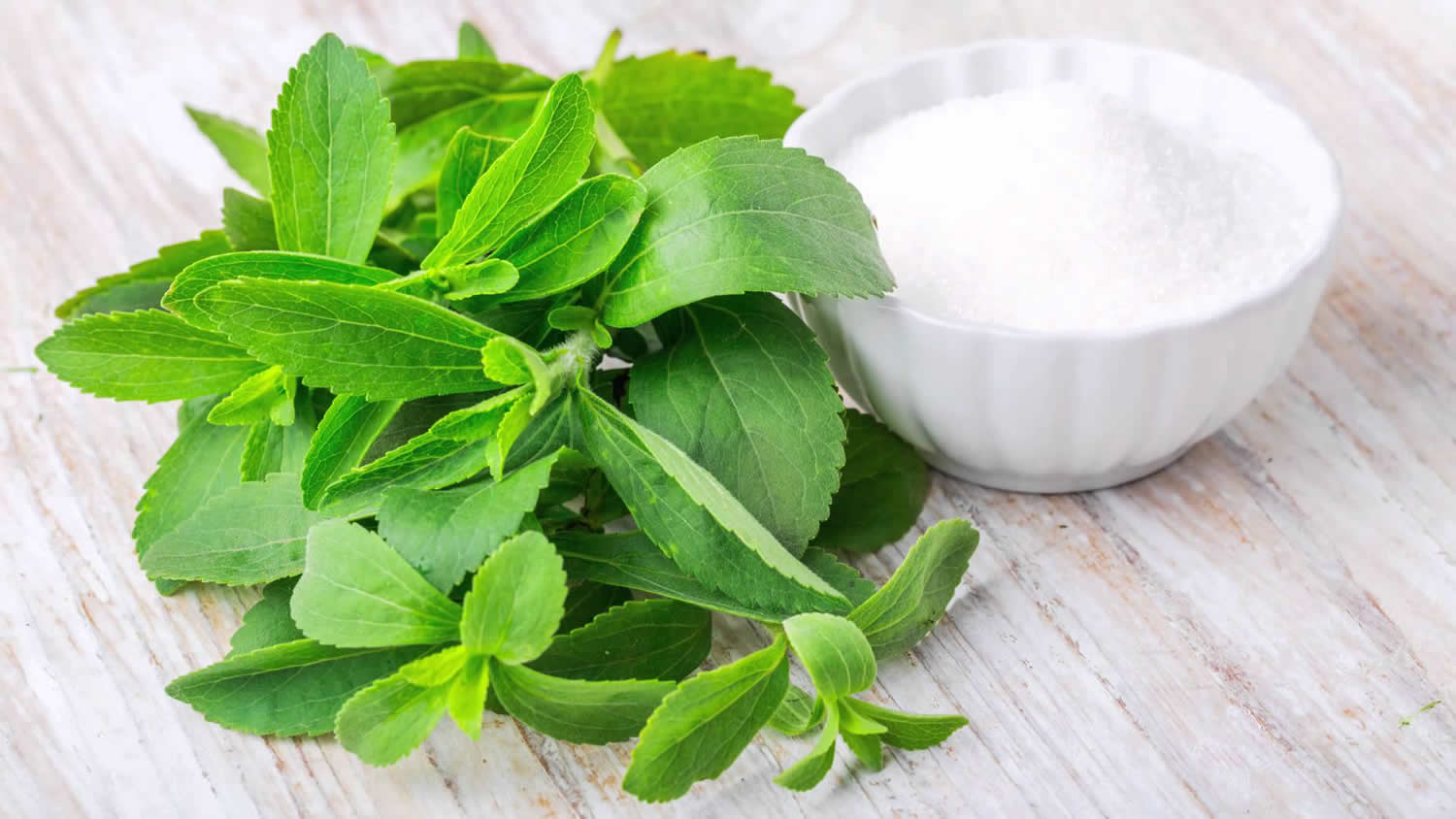 Monk Fruit (Nectresse and Luo Han Guo) also known as Siraitia grosvenori Swingle, has been used in China for centuries as a natural sweetening agent and has been reported to be beneficial for diabetic population 33), 34). However, limited research has been conducted to elucidate the relationship between the sweetening action and biological parameters that may be related to potential health benefits of Luo Han Kuo fruit. The present study 35) examined the effect of LHK fruit and its chemical components on insulin secretion using an in vitro cell model system. Mogroside V is the most abundant and the sweetest chemical component among the mogrosides in Luo Han Kuo fruit. The experimental data demonstrated that the crude Luo Han Kuo fruit extract stimulated the secretion of insulin in pancreatic beta cells; furthermore, pure mogroside V isolated from Luo Han Kuo fruit also exhibited a significant activity in stimulating insulin secretion by the beta cells, which could partially be responsible for the insulin secretion activity of Luo Han Kuo fruit and fruit extract. The current study supports that Luo Han Kuo fruit/extract has the potential to be natural sweetener with a low glycemic index and that mogroside V, possible other related mogrosides, can provide a positive health impact on stimulating insulin secretion 36).

Luohanguo is collected as a round green fruit that turns brown upon drying. The sweet taste of the fruit comes mainly from mogrosides, a group of triterpene glycosides that make up about 1% of the flesh of the fresh fruit 37). The mogrosides have been numbered 1-5 38) and the main component is called mogroside-5, previously known as esgoside. Other, similar compounds from luohanguo have been labeled siamenoside and neomogroside 39). The mixed mogrosides are estimated to be about 300 times as sweet as sugar by weight, so that the 80% extracts are nearly 250 times sweeter than sugar; pure mogrosides 4 and 5 may be 400 times as sweet as sugar by weight 40). Through solvent extraction, a powder containing 80% mogrosides can be obtained, the main one being mogroside-5 (esgoside). Other similar agents in the fruit are siamenoside and neomogroside 41). The powdered extract of monk (Luo Han Kuo fruit) fruit, a round green melon that grows in central Asia; 150 to 200 times sweeter than sucrose (table sugar); heat stable and can be used in baking and cooking and is more concentrated than sugar (¼ teaspoon or 0.5 grams equals the sweetness of 1 teaspoon or 2.5 grams sugar). FDA approved as generally recognized as safe (GRAS) as a food additive and table top sweetener.

No incidents of negative side effects of luo han guo have been reported.

In Europe, it is classified as an unapproved Novel Food which means that it may be marketed as a food or food ingredient only after a safety assessment and approval by the European Commission; as of 2017, monk fruit was not listed among approved Novel Foods in the EU 42).

The toxicity of monk fruit extract has been explored in numerous in vivo and in vitro studies, including acute toxicity, short-term toxicity, long-term toxicity, genotoxicity and mutagenicity studies. In all cases there were no observed adverse effects, establishing an no-observed-adverse-effect-level (NOAEL) for each category of toxicity for both the extract itself and for mogroside V. The lowest (i.e. most restrictive) no-observed-adverse-effect-level (NOAEL) of any category is
600 mg/kg body weight for genotoxicity of mogroside V. All other NOAELs for mogroside V are above 1 g/kg body weight (or 70 grams for a 70kg person). The NOAEL for acute toxicity of monk fruit extract is 10 g/kg body weight. Even at 600 mg/kg body weight, a 150-fold safety factor exists over the highest estimated daily intake (EDI) for 90th percentile consumers given in any of the GRAS determinations submitted to the US FDA. 86 mg/kg body weight per day for a healthy child. Conservatively assuming this highest EDI applies to a 75 kg individual, this would still only represent around the same intake of mogroside V as is contained in a single monk fruit, which is consistent with the consumption of monk fruit for traditional purposes in China.