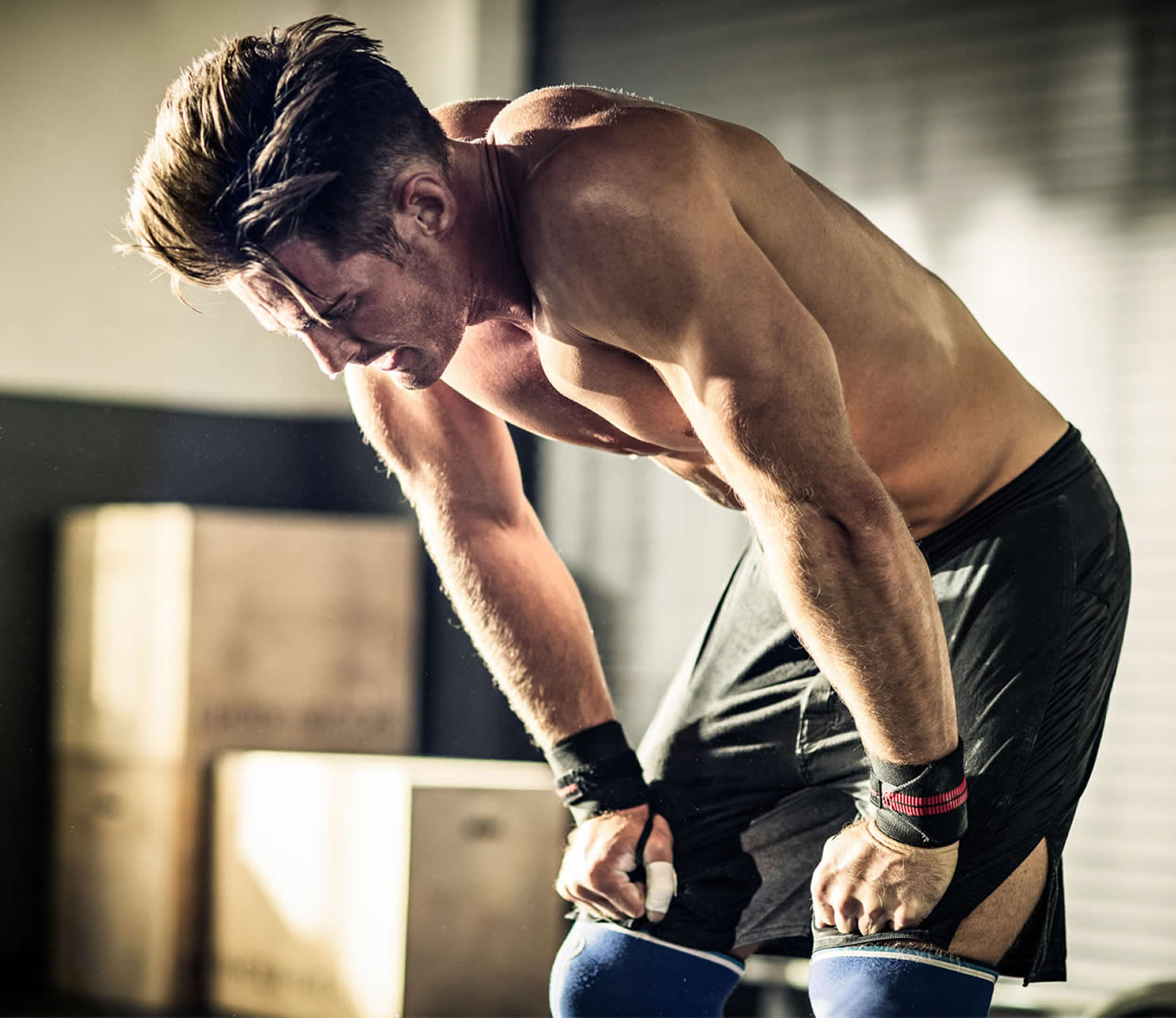 What is overtraining syndrome

Table 1. Terminology from position statement on overtraining by European College of Sport Science

Differentiation of nonfunctional overreaching (NFO) and overtraining syndrome is clinically difficult and can be made often only after a period of complete rest 5). The difference between the 2 is based on time to recovery and not necessarily the degree or type of symptoms 6).

Generally speaking, athletes train to increase performance. Performance increases are achieved through increased training loads. Increased loads are tolerated only through interspersed periods of rest and recovery—training periodization. Overreaching is considered an accumulation of training load that leads to performance decrements requiring days to weeks for recovery 12). Overreaching followed by appropriate rest can ultimately lead to performance increases 13). However, if overreaching is extreme and combined with an additional stressor, overtraining syndrome (OTS) may result 14). Overtraining syndrome may be caused by systemic inflammation and subsequent effects on the central nervous system, including depressed mood, central fatigue, and resultant neurohormonal changes 15).

Epidemiologic studies use varied terminology. It appears that Overtraining Syndrome is extremely rare, but exact prevalence and incidence data are lacking. *One study found a nonfunctional overreaching (NFO) lifetime prevalence of ~60% in elite male and female runners, compared with 33% in nonelite female runners 17). A multicenter, multicountry survey found that 35% of adolescent swimmers had been “overtrained” at least once 18). Estimates of “staleness” were reported in 5% to 30% of swimmers over a season 19) and in 15% of British elite athletes 20). In the most recent survey of elite adolescent athletes, ~30% reported nonfunctional overreaching (NFO) at least once in their careers—they averaged 2 episodes lasting 4 weeks. The risk was significantly increased in individual sports, low physically demanding sports (such as golf), females, and elite athletes 21).

Numerous hypotheses have been proposed for Overtraining Syndrome, each with strengths and weaknesses (Table 3). In attempting to understand Overtraining Syndrome mechanistically and clinically, it is crucial to seek an explanation that accounts for the many symptoms of this complicated entity.

Patients will primarily present with unexplained underperformance. Diagnosis of Overtraining Syndrome is clinical and accomplished through history, which should demonstrate the following 23):

The list of organic diseases that can result in underperformance is extensive and not limited to the following 24):

An extensive nutrition history should be obtained along with an assessment of caloric expenditure.

Often, underperformance will be met with an increase in training volume and intensity to improve results. History should include assessment of possible triggers (Table 4) 27). In addition, certain historical clues should raise suspicion of nonfunctional overreaching (NFO)/overtraining syndrome over organic diseases. These clues include the ability to start a training session but the inability to complete and/or a loss of finishing kick 28). While mood symptoms can coexist with organic processes, the presence of pervasive mood changes in the proper setting may signal nonfunctional overreaching (NFO)/overtraining syndrome versus a primary mood disorder 29).

In one of the few studies describing evaluation of underperforming athletes, a cause for repeated infections and/or fatigue was found in 68% of regional- or higher-level athletes 33). Ninety-three percent of the athletes reported decreases in performance. This evaluation was significant for a more extensive and costly laboratory evaluation, including B12, folate, serology for viral hepatitis, toxoplasmosis, cytomegalovirus/Epstein-Barr virus titers, Epstein-Barr virus DNA in saliva, serum and salivary immunoglobulins (serum immunoglobulin G subclasses and specific serum immunoglobulin E to aeroallergens), and antinuclear antibodies 34). Such extensive testing should be considered only in the appropriate setting. In those athletes with atopic complaints (allergic rhinitis, dyspnea and/or exertional cough, eczema), pulmonary function tests should be considered 35).

Biochemical markers have been studied in a variety of athlete populations. There have been no specific or sensitive levels defined for creatine kinase, urea, or iron 36). Recently, oxidative stress biomarkers have been found to correlate well with training load and overreached status,26 but such markers remain impractical in standard laboratories. Hematologic markers have also been disappointing. Recently plasma viscosity > 1.44 was found to be specific but not sensitive for NFO 37).

Immunologic markers have also been studied with variable results. Two studies have found increased levels of T cell activation, but such testing lacks practicality 38). Most recent studies focus on salivary immunoglobulin A. In endurance athletes, lower levels of salivary immunoglobulin A have been correlated with increased incidence of upper respiratory tract infection symptoms 39). One study showed 18% to 32% lower levels in athletes with symptoms of overtraining, but no performance measures were reported 40). However, another study did not find a statistically significant decrease of salivary immunoglobulin A after intensified training in cyclists 41). Most would agree that excessive exercise, functional overreaching (FO), nonfunctional overreaching (NFO) and Overtraining Syndrome can result in impairment in cell-mediated immunity, but there does not appear to be an immunologic marker that differentiates them 42).

Hormonal markers have shown some promising results but have a multitude of confounding variables (ie, diurnal and seasonal timing, phase of menstrual cycle, nutritional status) 43). Resting cortisol levels have not differentiated between athletes with and without nonfunctional overreaching (NFO) or Overtraining Syndrome. Testosterone results have been contradictory. Some have suggested that a decreased testosterone:cortisol ratio can be diagnostic of nonfunctional overreaching (NFO) and/or Overtraining Syndrome. However, the ratio represents the physiologic strain of training rather than the athlete’s maladaption to that stress. The utility of testosterone:cortisol ratio has not been supported by the literature 44).

Cortisol has a peak during the day with nadir during night 45). Morning cortisol does not accurately reflect levels of free cortisol 46). Free cortisol is filtered by the kidney at a constant rate; therefore, 24-hour and overnight urinary-free cortisol have been more studied 47). However, even overnight excretion shows high interindividual variability 48). Cortisol (catabolic and anti-inflammatory) is converted to inactive cortisone by 11β-HSD2. A prospective study found a clinically significant increase in overnight urinary cortisol:cortisone ratio during a high training load period in triathletes, who subsequently underperformed and reported fatigue 49). It is proposed that cytokines may inhibit 11β-HSD2 activity and result in relative increases in cortisol and, hence, catabolism 50). However, overnight urinary cortisol:cortisone ratio remains in the research realm and awaits validation.

Most agree that psychological distress is required for diagnosis of overtraining syndrome. The best-studied measure is Profile of Mood States scores. In 2 studies, 81% of “stale” swimmers were identified with the Profile of Mood States questionnaire 60). However, increased scores can be seen in athletes with increased training without FO/NFO 61) and have not always been reported with performance measures 62). Regardless, mood questionnaires can be prospectively followed, are cheap, and are quickly available. Variables such as timing of testing in relation to training must be standardized. In a case study of an NFO athlete, it was suggested that decreased Profile of Mood States vigor score may be more specific to overreaching than the Profile of Mood States fatigue score. It is suggested that fatigue is a “normal experience” in athletes, whereas decreased vigor can be viewed as maladaptive 63).

Treatment varies based on the etiology for the underperformance 64), and any organic disease should be treated appropriately. No treatment is required for FO other than balancing overload training with appropriate recovery 65). Treatment of NFO and overtraining syndrome is rest; however, some propose that relative rest is more appropriate 66). It is recommended to build up volume prior to intensity, starting from 5 to 10 minutes daily until 1 hour is tolerated 67). It is unclear which strategy is best, so the motivation for exercise, internal versus external, should be considered when recommending complete versus relative rest. Given the significant psychological overlay, one may consider involving a sports psychologist or other mental health expert in multidisciplinary management 68). If stress, depression, and/or anxiety are increased with full rest, relative rest with well-defined expectations should be provided 69).

Treatment with selective serotonin reuptake inhibitor is suggested by some based on similarities between neuroendocrinologic changes between depression and overtraining syndrome 70). However, one should be cautious of increased heat stress and possible decreased performance with antidepressant treatment in athletes. In addition, if sleep complaints are prominent, treatment with trazodone or amitriptyline could be considered 71).

Major components of prevention are screening and education. One should educate athletes at risk for overtraining that one of the initial signs of overreaching is increased rating of perceived exertion for a given workload 74). In addition, sports medicine providers may consider preemptively asking if training has increased to compensate for decreases in performance. History of athletes should include inquiry about training (monotony, excessive load, sudden increase, caloric/hydration needs in relation to load) and personal stressors (interpersonal, family, sleep, travel) (Tables 5).

How to build lean muscle

What is the best workout routine for building muscle ?

How To Get Six-Pack Abs

What is the best way to build muscle ?

What is the best supplements for muscle building ?

What is the best diet for building muscle?