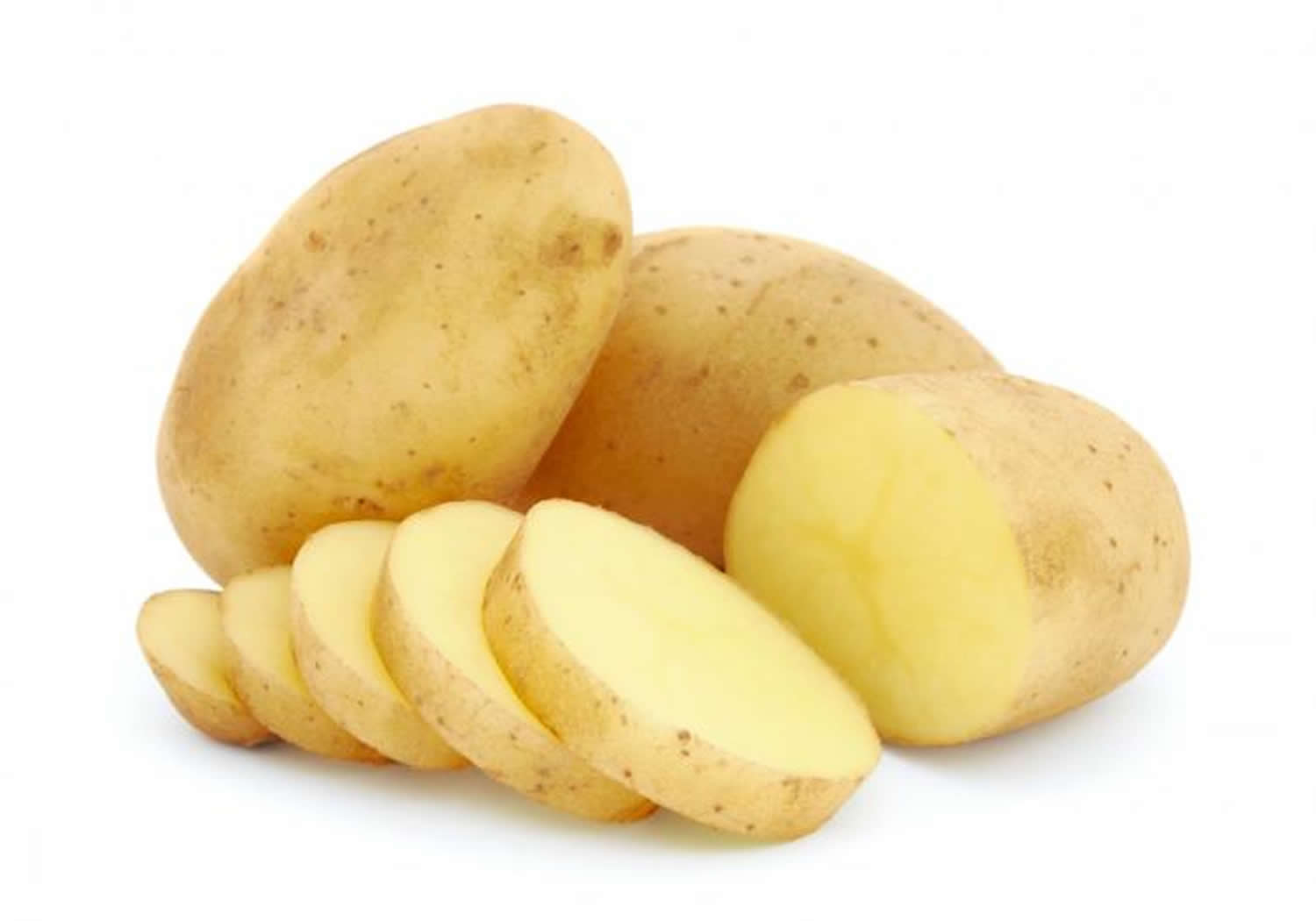 What is a potato

The potato is a starchy, tuberous crop from the perennial nightshade Solanum tuberosum. The word “potato” may refer either to the plant itself or to the edible tuber 1). In the Andes, where the species is indigenous, some other closely related species are cultivated. Potatoes were introduced to Europe in the second half of the 16th century by the Spanish 2).

There are about 5,000 potato varieties worldwide 3). Three thousand of them are found in the Andes alone, mainly in Peru, Bolivia, Ecuador, Chile, and Colombia. They belong to eight or nine species, depending on the taxonomic school. Apart from the 5,000 cultivated varieties, there are about 200 wild species and subspecies, many of which can be cross-bred with cultivated varieties. Cross-breeding has been done repeatedly to transfer resistances to certain pests and diseases from the gene pool of wild species to the gene pool of cultivated potato species. Genetically modified varieties have met public resistance in the United States and in the European Union 4), 5).

The major species grown worldwide is Solanum tuberosum (a tetraploid with 48 chromosomes), and modern varieties of this species are the most widely cultivated. There are also four diploid species (with 24 chromosomes): S. stenotomum, S. phureja, S. goniocalyx, and S. ajanhuiri. There are two triploid species (with 36 chromosomes): S. chaucha and S. juzepczukii. There is one pentaploid cultivated species (with 60 chromosomes): S. curtilobum. There are two major subspecies of Solanum tuberosum: andigena, or Andean; and tuberosum, or Chilean 6). The Andean potato is adapted to the short-day conditions prevalent in the mountainous equatorial and tropical regions where it originated; the Chilean potato, however, native to the Chiloé Archipelago, is adapted to the long-day conditions prevalent in the higher latitude region of southern Chile 7).

Potato has become a staple food in many parts of the world and an integral part of much of the world’s food supply. It is the world’s fourth-largest food crop, following corn, wheat, and rice 8). The green leaves and green skins of tubers exposed to the light are toxic 9). 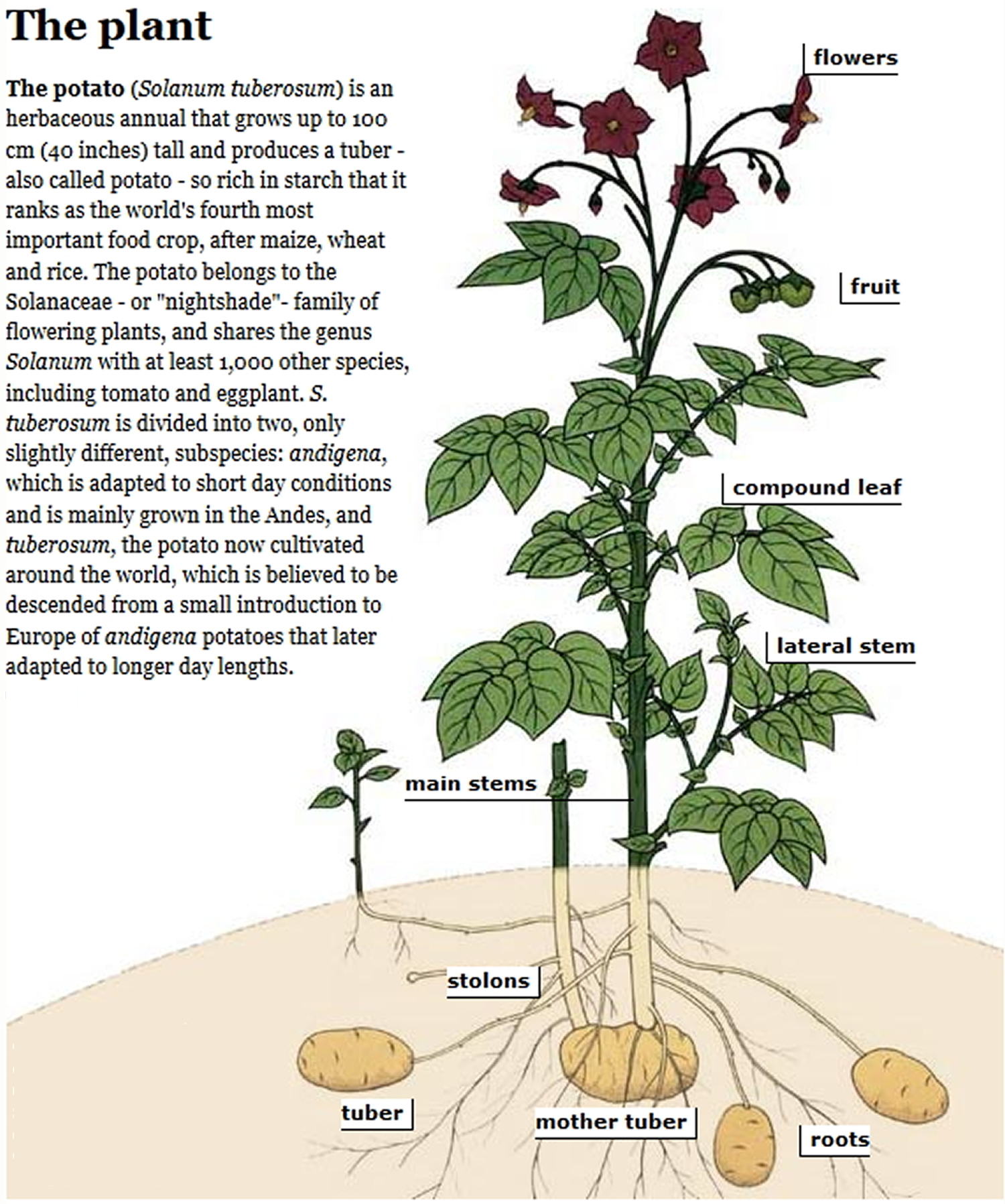 [Source: Food and Agriculture Organization of the United Nations 10)] 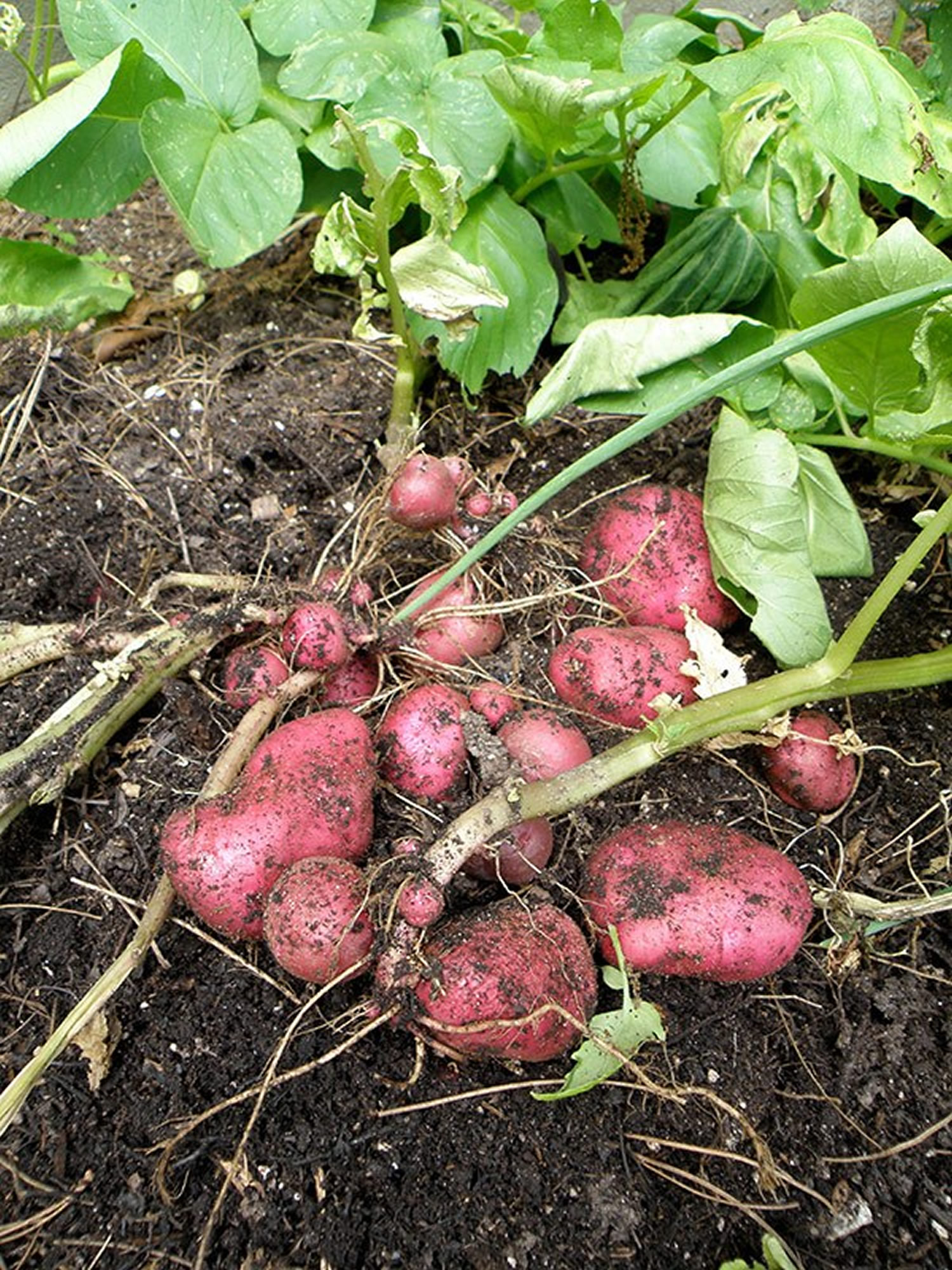 Wild potato species can be found throughout the Americas from the United States to southern Chile 11). The potato was originally believed to have been domesticated independently in multiple locations, but later genetic testing of the wide variety of cultivars and wild species proved a single origin for potatoes in the area of present-day southern Peru and extreme northwestern Bolivia (from a species in the Solanum brevicaule complex), where they were domesticated approximately 7,000–10,000 years ago 12), 13). Following millennia of selective breeding, there are now over a thousand different types of potatoes 14). Over 99% of the presently cultivated potatoes worldwide descended from varieties that originated in the lowlands of south-central Chile, which have displaced formerly popular varieties from the Andes 15), 16).

However, the local importance of the potato is variable and changing rapidly. It remains an essential crop in Europe (especially eastern and central Europe), where per capita production is still the highest in the world, but the most rapid expansion over the past few decades has occurred in southern and eastern Asia. As of 2014, China led the world in potato production, and, together with India, produced 37% of the world’s potatoes 17).

As part of the potato plant’s natural defences against fungi and insects, its leaves, stems and sprouts contain high levels of toxic compounds called glycoalkaloids (usually solanine and chaconine) 18). Glycoalkaloids are normally found at low levels in the tuber and occur in the greatest concentrations just beneath the skin.
Potatoes should be stored in a dark, cool place in order to keep glycoalkaloid content low 19). Under exposure to light, potatoes turn green in colour due to increased levels of chlorophyll, which can also indicate higher levels of solanine and chaconine 20). Since glycoalkaloids are not destroyed by cooking, cutting away green areas and peeling potatoes before cooking ensures healthy eating 21).

Raw potato is 79% water, 17% carbohydrates (88% of which is starch), 2% protein, 2% dietary fiber and contains negligible amount of fat (Table 1. Potato nutrition facts). In a 100 gram amount, raw potato provides 77 calories and is a rich source of vitamin B6 and vitamin C (23% and 24% of the Daily Value, respectively), with no other nutrients in significant amount (Table 1. Potato nutrition facts). When a potato is baked, contents of vitamin B6 and vitamin C decline with little significant change in other nutrients 22). Boiling potatoes in their skins prevents loss of nutrients.

Potatoes are often broadly classified as high on the glycemic index (GI) and so are often excluded from the diets of individuals trying to follow a low-GI diet. The glycemic index of potatoes can vary considerably depending on type (such as red, russet, white, or King Edward), origin, preparation methods (by cooking method, whether it is eaten hot or cold, whether it is mashed or cubed or consumed whole), and with what it is consumed (addition of various high-fat or high-protein toppings). For example, mashed potato (type not specified) has a glycemic index of 83 and Pontiac potato peeled and backed has a glycemic index of 93 23). To get a full list of potato glycemic index go to the University of Sydney’s Glycemic Index Database at GlycemicIndex.com 24). Consuming reheated or cooled potatoes that were previously cooked may afford a lower GI effect 25).

In the UK, potatoes are not considered by the NHS as counting towards the recommended daily five portions of fruit and vegetables 26). 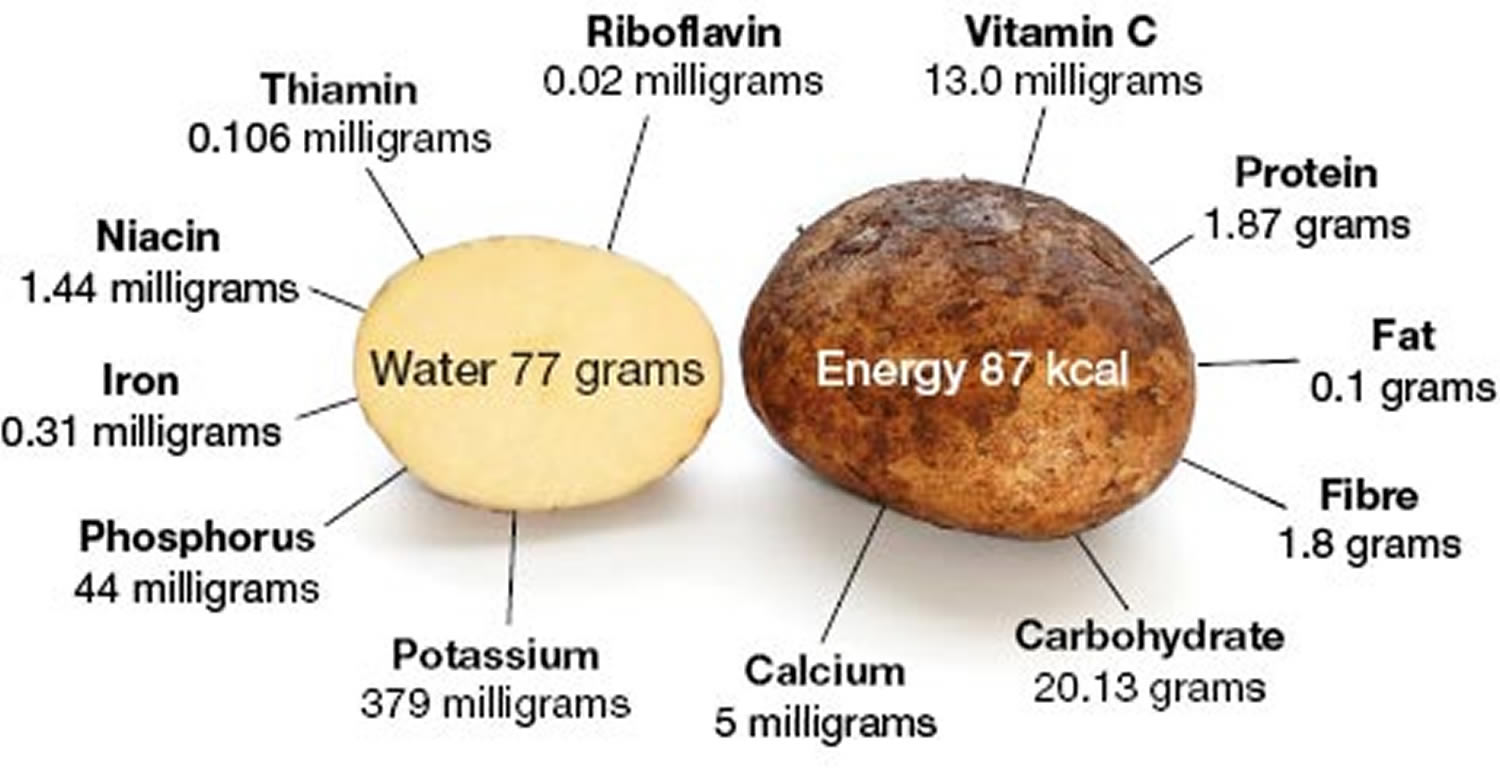 Note: Per 100 g, after boiling in skin and peeling before consumption.

[Source: Food and Agriculture Organization of the United Nations 27)]

Potato is a versatile, carbohydrate-rich food highly popular worldwide and prepared and served in a variety of ways. Freshly harvested, it contains about 79 percent water and 20 percent dry matter. About 60 to 80 percent of the dry matter is starch 29). On a dry weight basis, the protein content of potato is similar to that of cereals and is very high in comparison with other roots and tubers. In addition, the potato is low in fat (almost zero fat) – but preparing and serving potatoes with high fat ingredients raises the caloric value of the dish. Potatoes are important in many diets, but need to be balanced with other vegetables and whole grain foods.

Potatoes are rich in several micro nutrients, especially vitamin C – eaten with its skin, a single medium sized potato of 150 g provides nearly half the daily adult requirement (100 mg). The potato is a moderate source of iron, and its high vitamin C content promotes iron absorption. It is a good source of vitamins B1, B3 and B6 and minerals such as potassium, phosphorus and magnesium, and contains folate, pantothenic acid and riboflavin. Potatoes also contain dietary antioxidants, which may play a part in preventing diseases related to ageing, and dietary fiber, which benefits health.

In many developing countries, and especially in urban areas, rising levels of income are driving a “nutrition transition” toward more energy-dense foods and prepared food products. As part of that transition, demand for potato is increasing 30). In South Africa, potato consumption has been growing in urban areas, while in rural areas maize is still the staple. In China, higher income and increased urbanization have led to increased demand for processed potatoes 31). Thus, the potato already plays a role in diet diversification in many countries. However, where other staple crops are available to meet energy requirements, potato should not replace them but rather supplement the diet with its vitamins and mineral content and high quality protein. Potatoes can be important staple foods, but balanced diets need to include other vegetables and whole grain foods 32).

As part of the trend toward greater consumption of “convenience foods”, demand for fried potatoes is increasing. Over-consumption of these high-energy products, along with reduced physical activity, can lead to overweight. Therefore the role of fried potato products in the diet must be taken into consideration in efforts to prevent overweight and diet related non-communicable diseases, including heart disease and diabetes. Type 2 diabetes is caused by many factors, and further research is needed to determine whether potato consumption and Type 2 diabetes may be linked 33).

The nutritive value of a meal containing potato depends on other components served with them and on the method of preparation. By itself, potato is not fattening (and the feeling of satiety that comes from eating potato can actually help people to control their weight). However, preparing and serving potatoes with high-fat ingredients raises the caloric value of the dish.

Since the starch in raw potato cannot be digested by humans, they are prepared for consumption by boiling (with or without the skin), baking or frying. Each preparation method affects potato composition in a different way, but all reduce fibre and protein content, due to leaching into cooking water and oil, destruction by heat treatment or chemical changes such as oxidation.

Boiling – the most common method of potato preparation worldwide – causes a significant loss of vitamin C, especially in peeled potatoes 34). For french fries and chips, frying for a short time in hot oil (140ºC to 180ºC) results in high absorption of fat and significantly reduces mineral and ascorbic acid content 35). In general, baking causes slightly higher losses of vitamin C than boiling, due to the higher oven temperatures, but losses of other vitamins and minerals during baking are lower 36).

The problems with potato

In the U.S., people eat an average of 126 pounds of potatoes per person each year 37). However, potatoes don’t count as a vegetable because they are high in the type of carbohydrate that the body digests rapidly, causing blood sugar and insulin to surge and then dip (in scientific terms, they have a high glycemic load).

Over the long term, diets high in potatoes and similarly rapidly-digested, high carbohydrate foods can contribute to obesity, diabetes, and heart disease 42), 43), 44), 45), 46).

Potatoes seem to be a particular culprit for weight gain and diabetes:

A similar long-term study found that high potato and French fry intakes were linked to a greater risk of diabetes in women, and that replacing potatoes with whole grains could lower diabetes risk 49).

Potatoes do contain important nutrients—vitamin C, potassium, and vitamin B6, to name a few. But the potato is not the only source of these nutrients, nor is it the best:

What to eat instead of potatoes ?