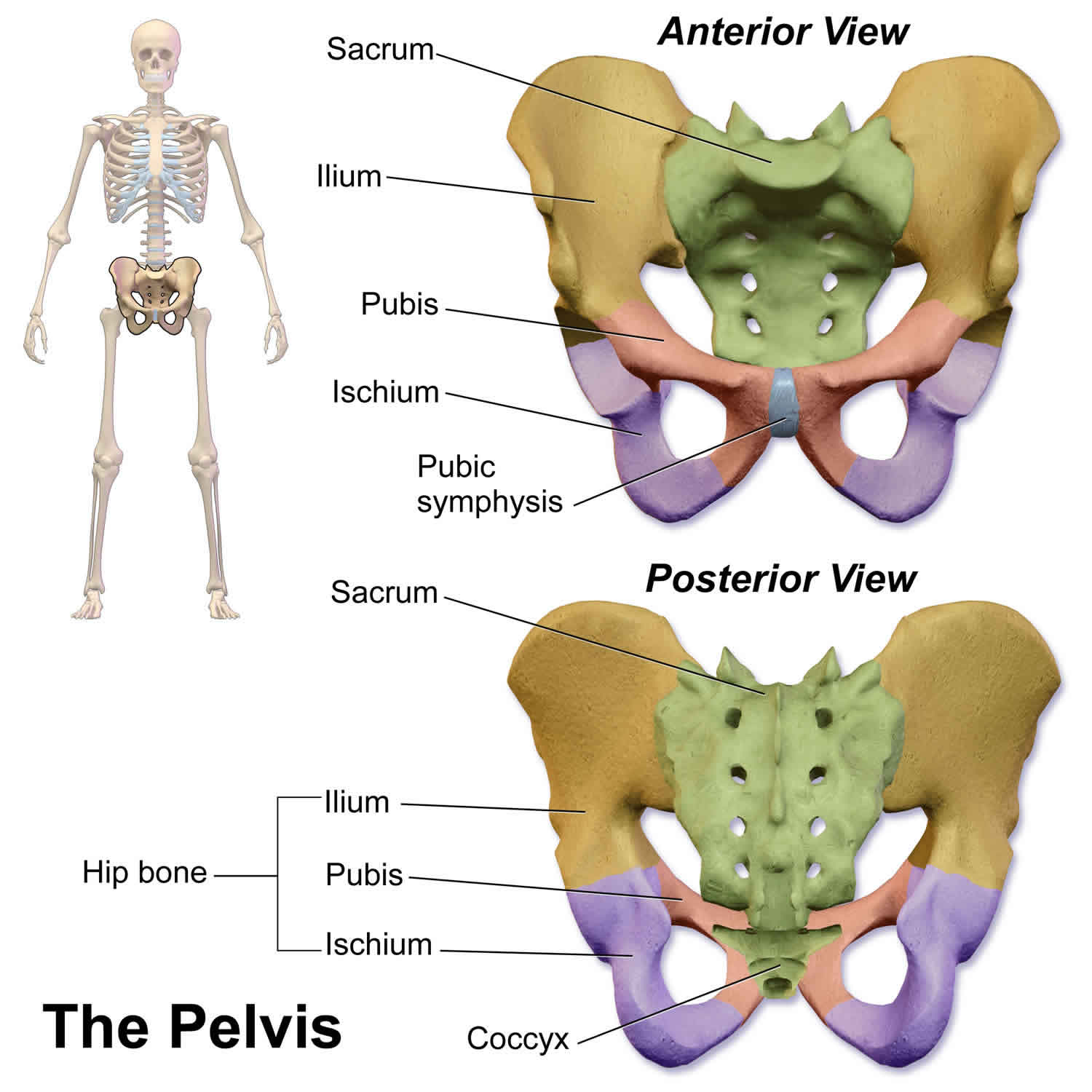 What is pubic symphysis

The pubic symphysis is reinforced by four strong ligaments 3):

The superior pubic ligament and the inferior pubic ligament, provide the most stability; the anterior and posterior ligaments are weaker. The strong and thicker superior ligament is reinforced by the tendons of the rectus abdominis muscle, the abdominal external oblique muscle, the gracilis muscle, and by muscles of the hip. The superior pubic ligament connects together the two pubic bones superiorly, extending laterally as far as the pubic tubercles. The inferior ligament in the pubic arch is also known as the arcuate pubic ligament or subpubic ligament; it is a thick, triangular arch of ligamentous fibers, connecting together the two pubic bones below, and forming the upper boundary of the pubic arch. Above, it is blended with the interpubic fibrocartilaginous lamina; laterally, it is attached to the inferior rami of the pubic bones; below, it is free, and is separated from the fascia of the urogenital diaphragm by an opening through which the deep dorsal vein of the penis passes into the pelvis.

Other ligaments which attach to the pubic symphysis include:

The width of the pubic symphysis joint space differs at different ages:

For physiological reasons, women have a greater thickness of the fibrocartilaginous disc, allowing more mobility of the pelvic bones and thereby providing a larger pelvic diameter needed for childbirth. During pregnancy, due to the presence of certain hormones like relaxin, the gap in the symphysis pubis can increase by 2-3 mm.

The incidence of pathologic, complete separation of the pubic symphysis following pregnancy is reported to be within 1 in 300 to 1:30,000, with many instances likely undiagnosed 10). In a published case series out of the University of Pennsylvania School of Medicine, they reported the incidence at a single institution to be 1 in 569 deliveries over two years. Under-reporting is likely, due to inconsistencies in diagnosis and patients often presenting with mild symptoms and limited debility; MR studies show a high incidence in pubic lesions following vaginal childbirth even in low-risk pregnancies (bone marrow edema, bone fracture, capsule fracture), but they normally tend to recover and are not associated to prolapse or incontinence 11).

Patients can present with pubic symphysis diastasis before delivery, during delivery, or most commonly postpartum 12). The postpartum presentation is most common and presentation can encounter delay as spinal epidural anesthesia administered during the birthing process can mask the symptoms. Typical presentation involving pubic symphysis diastasis following pregnancy is unrelenting pain in the anterior pelvis and suprapubic region, with or without pain localized over the sacroiliac joints from associated posterior pelvic ring ligamentous injury. Pain from the anterior pelvis can radiate and manifest in the hip joints and radiate down the legs. Patients will often have extreme difficulty with weight bearing and can retain urine often requiring the use of an indwelling Foley’s catheters.

Patients will have difficulty with both active and passive straight leg raise and changes in bed positioning 13). On physical examination, patients will often present in distress secondary to pain, pain with palpation or attempted manipulation of the pelvic girdle, and pain with attempted weight bearing or ambulation. The literature describes soft tissue edema or hematoma on the pubis and perineum 14), as well as a palpable gap in the pubic symphysis in several case studies 15). The literature does not describe associated nerve and vascular injury.

Pubic symphysis diastasis occurs spontaneously during complicated deliveries, but symphysiotomy is performed for treatment of obstructed labor and shoulder dystocia in countries where cesarean section is not immediately available, and maternal mortality from cesarean delivery remains high 16). A retrospective study shows that it is a safe procedure, confers a permanent enlargement of the pelvic inlet and outlet facilitating vaginal delivery in future pregnancies, and is a life-saving operation for the child; severe complications are rare 17). Chronic pain during movement or intercourse might result from a residual separation over 2.5 cm 18).

Discussions of multiple treatment options in the literature include non-operative treatment with application of pelvic binder coupled with physical therapy and immediate weight bearing, non-weight bearing with bedrest, closed reduction with application of binder, application of anterior external fixator with or without sacroiliac screw fixation, and anterior internal fixation with plate and screws. A multi-disciplinary approach is essential in both early detection and treatment for satisfactory patient outcomes 19).

Identified risk factors for postpartum pubic symphysis diastasis include primigravid women (a woman in her first pregnancy), multiple gestations (multiple pregnancy or more than one fetus), and prolonged active labor 20). Forceps deliveries, deliveries of newborns weighing over 4000 gm, and infant macrosomia are also possible etiologies in cases of pubic separation 21); epidural analgesia and shoulder dystocia or McRoberts maneuver are also reported 22). A review of case reports also notes a higher incidence in Scandinavian women. While increased serum relaxin hormone levels have been identified in women with pubic symphysis diastasis, however, no direct correlation has been proven between these elevated levels and an increased incidence of post-partum separation.

Other theoretical causes or predisposing factors for pubic symphysis diastasis include 23):

Relaxin, a hormone secreted by the placenta during pregnancy, peaks during the first trimester and again peripartum in females 24). A modulator of arterial compliance and cardiac output during pregnancy, relaxin also serves to relax the pelvic ligaments and contribute to softening of the cartilage of the pubic symphysis for preparation of the birth canal for delivery 25). As seen in most pelvic ring injuries that separate anteriorly at the pubic symphysis, there is often an associated posterior pelvic ring injury as well, with stretch, partial tears, or complete tears of the sacroiliac ligaments. Complicated deliveries (contracted pelvis, macrosomia, shoulder dystocia, a long second stage of labor) are prone to soft tissue (levator anis muscle) and bone lesions due to the stretching forces.

When postpartum pubic diastasis is suspected clinically, an ultrasound scan can be diagnostic and used for screening 26), but then a standard AP pelvis radiograph should be obtained. On the evaluation of plain film imaging, pubic symphysis diastasis greater than 1 cm indicates a pathologic process of the pelvic girdle 27). The bilateral sacral iliac joints should also undergo evaluation on plain radiography for gapping or gross separation. A CT with a three-dimensional reconstruction is also helpful in the further evaluation of the pubic symphysis and sacral iliac joints. If plain radiographs show a significant pubic separation greater than 4 cm, treatment algorithms support obtaining non-contrast-enhanced magnetic resonance imaging to assess for surrounding soft tissue injury 28).

In most cases, conservative, non-operative management is recommended and yields good functional outcomes. While early operative management has been advocated in cases where pubic diastasis measures more than 4 cm, the patient is at increased risk for perioperative complications in the postpartum state. Distorted pelvic anatomy, increased pelvic vascularity, and peripartum hypercoagulability complicates surgical intervention and must be a consideration.

Prognosis is very good for the majority of patients who experience postpartum pubic symphysis diastasis, and in most cases, full recovery without persistent pain is the expectation 29). Follow-up radiographs in most case studies show near-complete closure of the pubic symphysis and complete resolution of symptoms within 3 months 30). Some patients did require further physical therapy for up to 6 months. No significant long term complications have been identified. No definitive recommendations exist regarding alteration of care for future pregnancies, and this would be a good area for future study.