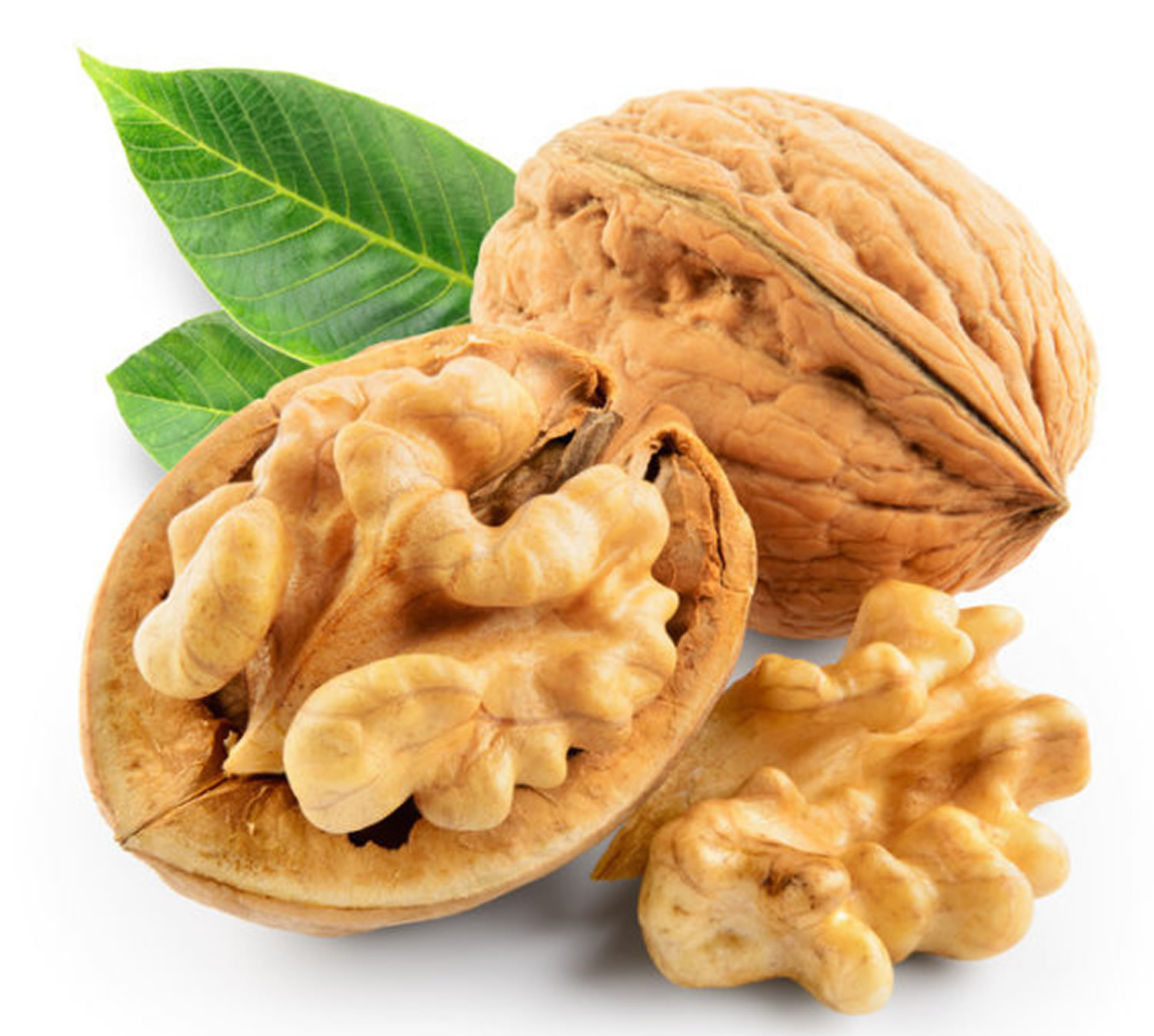 A walnut is the nut of any tree of the genus Juglans (Family Juglandaceae). Walnuts are rounded, single-seeded stone fruits of the walnut tree commonly used for the meat after fully ripening. Following full ripening, the removal of the husk reveals the wrinkly walnut shell, which is usually commercially found in two segments (three-segment shells can also form). Technically a walnut is the seed of a drupe or drupaceous nut, and thus not a true botanical nut. There are two major varieties of walnuts grow in in the United States—the English or Persian walnut (Juglans regia) and the Black walnut (Juglans nigra). The English Walnut originated in Persia, and the Black walnut is native to the United States. The black walnut is of high flavor, but due to its hard shell and poor hulling characteristics it is not grown commercially for nut production. Numerous walnut cultivars have been developed commercially, which are nearly all hybrids of the English walnut 1).

Other species include Juglans californica, the California black walnut (often used as a root stock for commercial breeding of English walnut), Juglans cinerea (butternuts), and Juglans major, the Arizona walnut. Walnuts are used for food after being processed while green for pickled walnuts or after full ripening for its nutmeat. Nutmeat of the eastern black walnut from the Juglans nigra is less commercially available, as are butternut nutmeats from Juglans cinerea.

Walnuts, like other tree nuts, must be processed and stored properly. Poor storage makes walnuts susceptible to insect and fungal mold infestations; the latter produces aflatoxin – a potent carcinogen. A mold-infested walnut batch should be entirely discarded 2).

The ideal temperature for longest possible storage of walnuts is in the −3 to 0 °C (27 to 32 °F) and low humidity – for industrial and home storage. However, such refrigeration technologies are unavailable in developing countries where walnuts are produced in large quantities; there, walnuts are best stored below 25 °C (77 °F) and low humidity. Temperatures above 30 °C (86 °F), and humidities above 70 percent can lead to rapid and high spoilage losses. Above 75 percent humidity threshold, fungal molds that release dangerous aflatoxin can form 3), 4).

Are walnuts good for you ?

Many people think of nuts as just another junk food snack. In reality, nuts are excellent sources of healthy fat, protein, and other healthful nutrients.

One surprising finding from nutrition research is that people who regularly eat nuts are less likely to have heart attacks or die from heart disease than those who rarely eat them 5). Several of the largest cohort studies, including the Adventist Study, the Iowa Women’s Health Study, the Nurses’ Health Study I (76,364 women from 1980 to 2012),  Nurses’ Health Study II (92,946 women from 1991 to 2013) and the Health Professionals Follow-Up Study (41,526 men from 1986 to 2012) have shown a consistent 30 percent to 50 percent lower risk of myocardial infarction (heart attack), sudden cardiac death or cardiovascular disease associated with eating nuts several times a week. 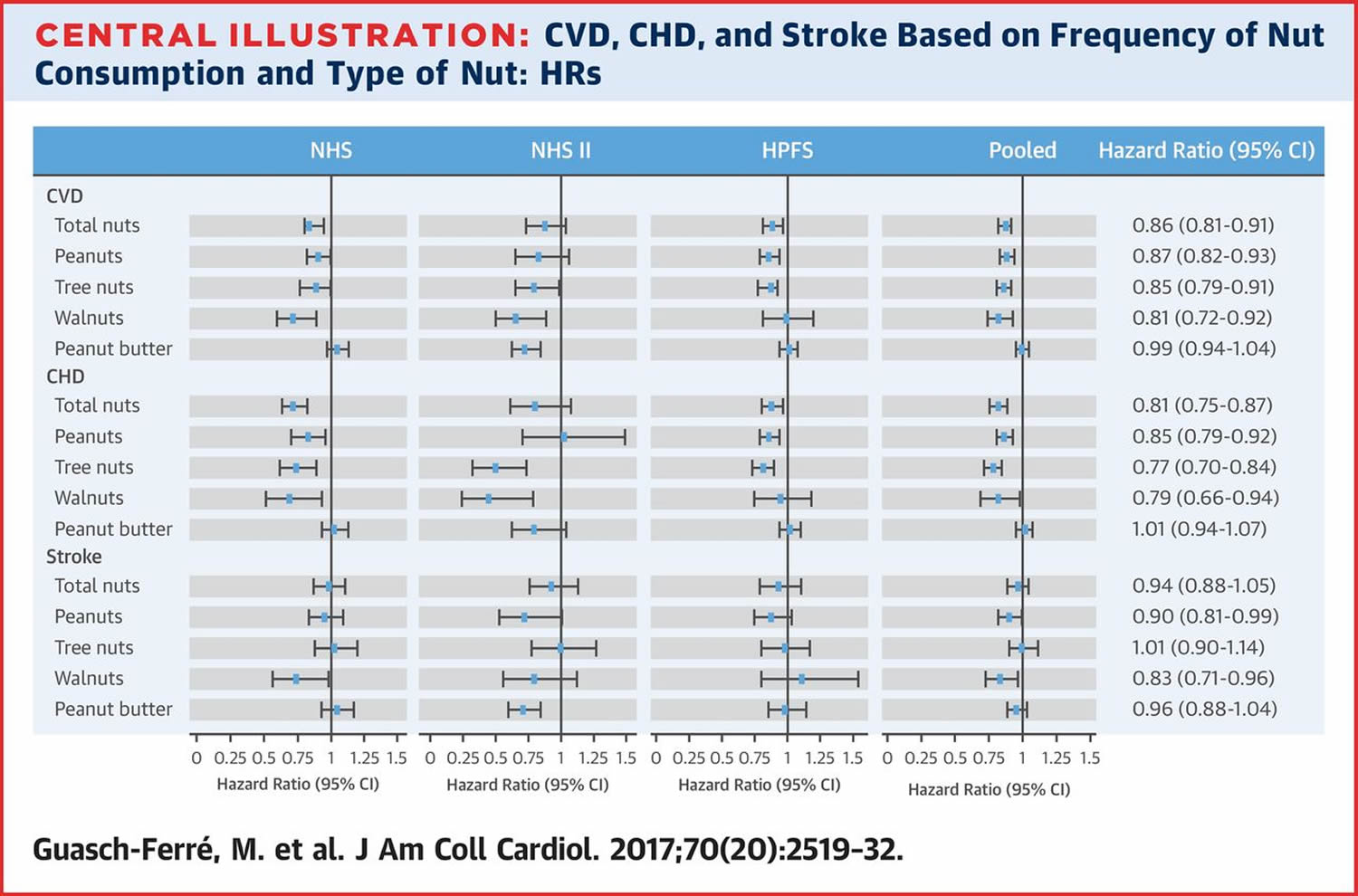 Note: CVD = cardiovascular disease; CHD = coronary artery disease; Hazard Ratio = A measure of how often a particular event happens in one group compared to how often it happens in another group, over time. Anything under 1.0 is better. For example, a hazard ratio of 0.83 for stroke in those who consumes walnuts at least once a week is thought to mean that a group has 83% the chance of dying than a comparison group who don’t consumer walnuts.

In one large study examining nuts and health, researchers analyzed data from over 210,000 health professionals followed up to 32 years 11). They found that, compared with those who never or almost never ate nuts, people who ate one ounce of nuts five or more times per week had a 14% lower risk of cardiovascular disease and a 20% lower risk of coronary heart disease during the study period. Both peanuts (technically a legume, but nutritionally similar to nuts) and walnuts were linked with lower disease risk.

Among members of the nut family, walnuts have been found to be particularly promising in terms of health benefits. Compared with most other nuts, walnuts have a higher content of polyunsaturated fatty acids (PUFAs), including α-linolenic acid (ALA), which may confer additional antiatherogenic influences 14). Epidemiological studies suggest that plant-derived α-linolenic acid (ALA) may confer particular cardiovascular benefits 15). According to a review of clinical trials, consumption of 2–3 servings of walnuts per day has been found to consistently decrease total cholesterol and LDL cholesterol 16). Consumption of walnuts has also been shown to improve endothelial function in individuals with hypercholesterolemia and type 2 diabetes 17), 18). In addition, walnuts have been found to increase the insulin response during an oral glucose tolerance test, and to decrease levels of glycated hemoglobin (HbA1c), in individuals with polycystic ovary syndrome (PCOS) 19).

Several reviews have described possible explanations and mechanisms by which this unique fatty acid profile can beneficially affect cholesterol concentrations and other cardiovascular disease risk factors 20). Whether by simply replacing saturated fatty acids in the diet or by explicitly acting on various pathways in cardiovascular disease (CVD) development, walnuts appear to have the potential to beneficially affect cardiovascular disease risk. Feeding trials have shown cholesterol-lowering trends in walnut-enriched diets compared with control diets, as reviewed by Feldman 21), 22). Many qualitative reviews have suggested beneficial effects of walnuts on cholesterol concentrations 23).

The high levels of antioxidants found in walnuts conferred an improvement in antioxidant status as noted by increased enzyme activity and stable oxidation of LDL (bad) cholesterol. Some inflammatory markers also improved with walnut consumption compared with other diets. Evidence for C-reactive protein reduction was inconsistent, although decreases in vascular cell adhesion molecule 1 (VCAM-1) were apparent among subjects during walnut-rich diets. Vascular cell adhesion molecule 1 (VCAM-1) is a marker for endothelial function. Overall, walnuts significantly improved lipid profiles and favorably affected a number of other factors associated with cardiovascular disease risk. There was no evidence, however, which suggests that walnut-enriched diets beneficially affected insulin resistance or blood pressure 24).

Of course, eating nuts won’t do much good if you gobble them in addition to usual snacks and meals. Furthermore, due to their high energy density, they are also a theoretical contributor to positive energy balance and weight gain, which potentially raises questions about such recommendations 25). At an average of 185 calories per ounce, a handful of walnuts a day could add 10 pounds or more in a year if you don’t cut back on something else. This weight gain would tip the scales toward heart disease, not away from it. Instead, eat nuts instead of chips or other, less healthy snacks. Or try using them instead of meat in main dishes, or as a healthful crunch in salads.

There has been some concern about recommending increased nut consumption for patients with high cholesterol concentrations because of the high fat content and supposed risk of weight gain. Multiple authors have reviewed this topic and conclude that short-term intervention data do not suggest a significant weight gain and to the contrary, sometimes indicate weight loss with increased nut consumption 26), 27). Of the studies identified in the literature review, none reported significant weight change while on a walnut-based diet intervention. The 4 studies reporting BMI (body mass index) change 28) and the 8 studies reporting weight change 29), 30), 31), 32), 33), 34) outcomes actually observed slight nonsignificant decreases from baseline. Results are mixed when compared with the control diets in a meta-analysis, producing an overall null difference between them 35). Importantly, weight gain did not occur during short-term dietary interventions with walnuts.

The walnut is nutrient-dense with protein and essential fatty acids. Walnuts without shells are 4% water, 15% protein, 65% fat, and 14% carbohydrates, including 7% dietary fiber (see Table 1).

While English walnuts are the most commonly consumed, their nutrient density and profile are generally similar to those of black walnuts.

Unlike most nuts that are high in monounsaturated fatty acids, walnut oil is composed largely of polyunsaturated omega-3 fatty acids ~ 47.2 g (72% of total fats), particularly alpha-linolenic acid (14%) and linoleic acid (58%), although it does contain oleic acid as 13% of total fats 36).