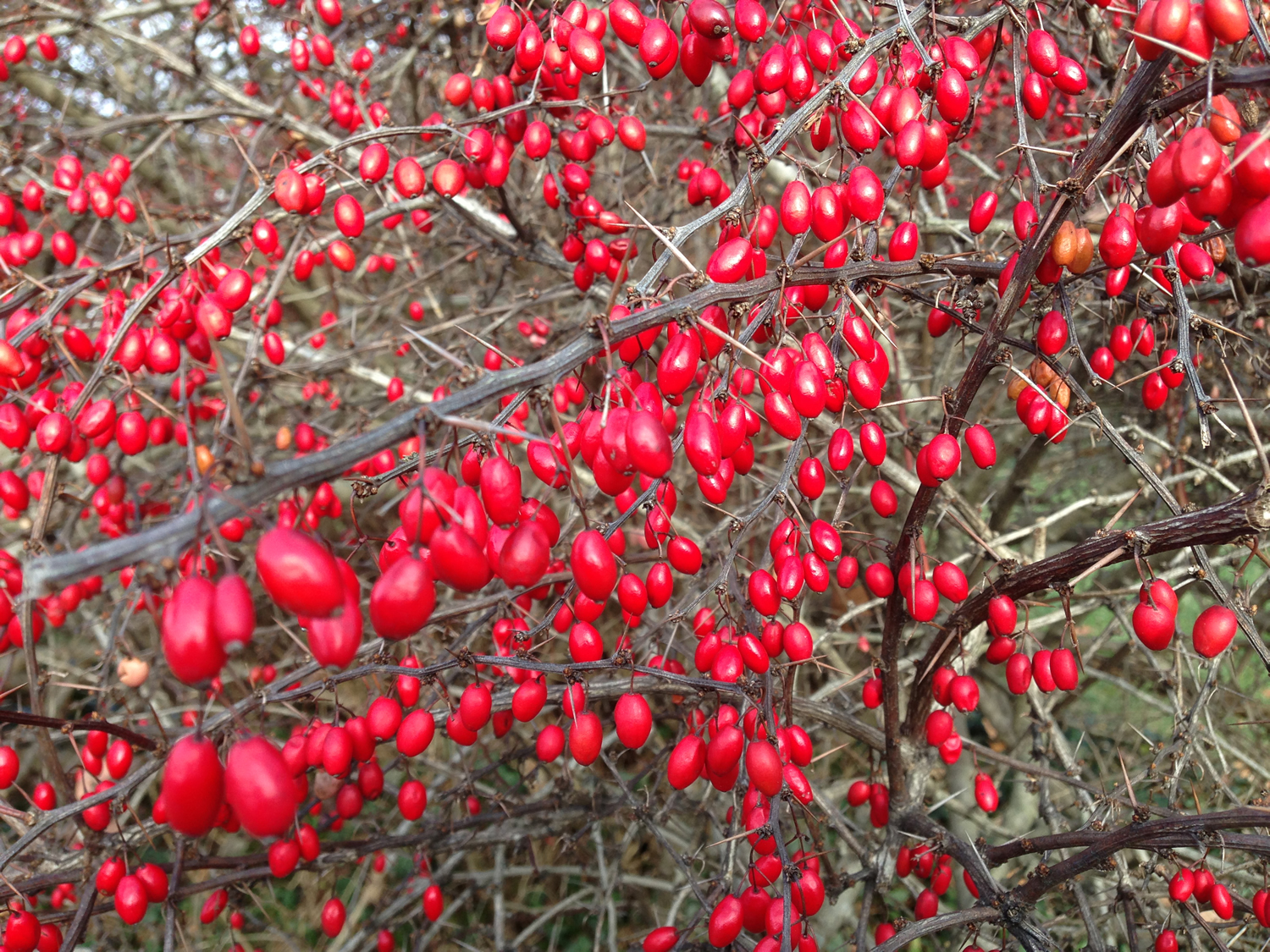 Barberry also known as berberis is a large genus of deciduous and evergreen shrubs from 1–5 m (3.3–16.4 ft) tall found throughout the temperate and subtropical regions of of Asia, Europe, Africa, North America, and South America. The genus Berberis (Berberidaceae) includes about 500 species that commonly occur in most areas of central and southern Europe, the northeastern region of the United States and in South Asia including the northern area of Pakistan and Iran 1), 2). Many of the species have spines on the shoots and along the margins of the leaves 3). Among the several species of this genus, Berberis vulgaris (barberry) is well known and its fruits have been used in the preparation of a special dish with rice and also in Berberis juice 4), 5), 6). The fruits of most plants from Berberidaceae family have a sour taste which is due mainly to the presence of ascorbic acid or vitamin C.

In traditional medicine, different organs of this plant are used to treat diseases. Fruit, bark, root, and stem are the pharmaceutical organs of Berberis vulgaris. Barberry fruit is the most frequently used organ of this plant in traditional and modern medicine 7). Sometimes Berberis vulgaris has been used as a tea made from the bark of the plant 8). Besides nutritional consumption, various parts of this plant including roots, bark, leaves and fruits have been employed in folk and traditional medicine for a long time in Iran 9), 10). The stem and root barks are used for their cathartic (laxative effect), diuretic (increased passing of urine), antipyretic (reduce fever), anti-bilious (anti nausea or vomiting), and antiseptic properties. Also, the decoction of leaves is used as anti-scorbutic (preventing or curing scurvy) in dysentery, scurvy angina, and sore throat 11).

In Iran, dried barberry fruit is used in many foods — the fruit or its derivatives are used to produce certain products such as sauce, jelly, juice, jam, marmalade, and carbonated drinks. Besides that, barberry is used to season, flavor, and garnish foods to satisfy different flavors 12). This fruit is also used in industries. For example, the anthocyanin found in barberry fruit is used as a nature-based color 13).

Different organs of Berberis vulgaris are used in food and pharmaceutical industries and the decorative species are used to decorate different places. According to traditional medicine, Berberis vulgaris is used to treat fever, cough, liver disease, depression, hyperlipidemia, hyperglycemia and bleeding 15), 16).

Various species of the genus Berberis which occur around the world are cultivated and grown for specific purposes 17). Berberis vulgaris is the most widely known barberry which is mainly used as a food is cooked with rice (seedless or red), Berberis integerrima, also referred to as black barberry and wild barberry, are used mainly for juice extraction in food industries and as medication 18), 19).

Medicinal uses of barberry (Berberis vulgaris) in Chinese medicine date back to over 3000 years ago and in some other countries to over 2500 years ago 24). There are a variety of alkaloids in the various organs of this plant, most important of which is berberine 25). Berberine, an isoquinoline alkaloid, is a member of naturally occurring protoberberines class (Figure 2), can exert different effects, including antioxidant, anti-inflammatory, hypoglycemic, hypotensive, and hypolipidemic activities 26), 27)..

Figure  2. Chemical structure of Berberine and its metabolites 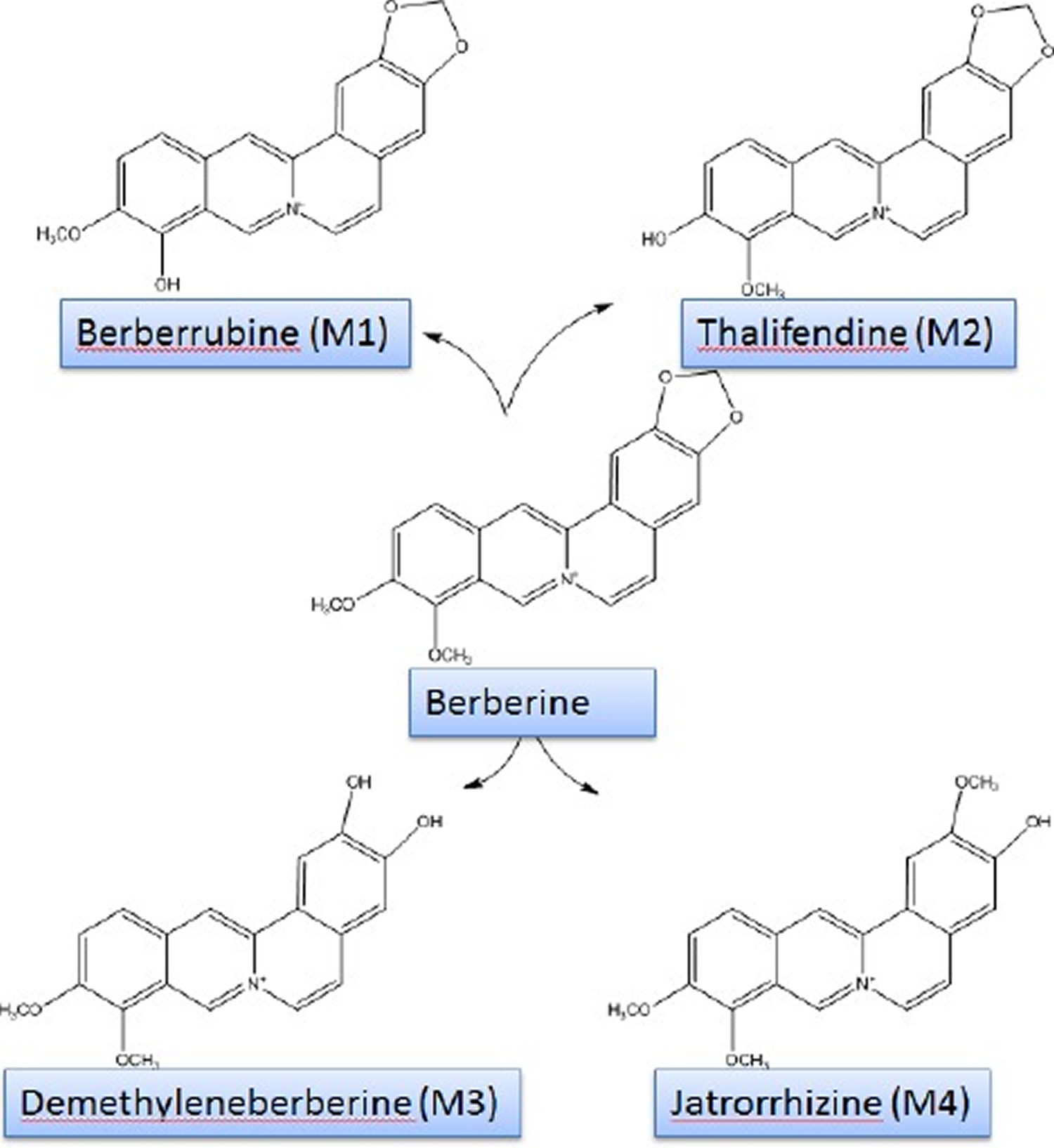 This alkaloid is present in plants of Berberidaceae, Papaveraceae and Ranunculaceae families including Arcangelisia flava (menispermaceae), B. vulgaris (barberry), B. aristata (tree turmeric), B. aquifolium (Oregon prape), B. lyceum, B. crataegina, Hydrastis canadensis (goldenseal) and Coptis chinensis (Chinese goldthread). Berberine widely consumed in Ayurvedic and Chinese medicine 29), 30), 31). Berberine has been isolated from various parts of these species such as root, stem, bark, fruit and rhizome 32).

Traditional use of root, bark, leaf and fruits of barberry as an immunemodulator and anti-microbial agent as well as a treatment for central nervous system, cardiovascular, gastrointestinal, endocrine, and renal problems have been shown in two pharmacological studies 33), 34). Recently published articles using animal subjects and laboratory test tubes test have demonstrated that barberry and berberine (its main constituents) have anti-oxidant 35), anti-inflammatory 36), anti-tumor 37), anti-mutagenic 38) and anti-diabetic 39) effects. Their hypoglycemic and cholesterol lowering properties 40), neuroprotective 41), and hepatoprotective 42), effects have scientifically been proved by numerous studies. B. vulgaris may possesses preventive effects in relapse of morphine consumption in addicted individuals 43). It has been demonstrated that B. vulgaris and berberine induces inhibitory effects on Leishmania species 44). Also, it has been reported as an anti-fungal compound 45). There are evidences in vivo and in vitro that berberine hydrochloride has beneficial effects on colitis 46).

Although there are over 500 plants from genus Berberis that are accessible to people across the world, only four barberry plants are being used to treat different diseases 47), 48), 49).

Table 1. Pharmacological and biological activity of the various species of Berberis genus 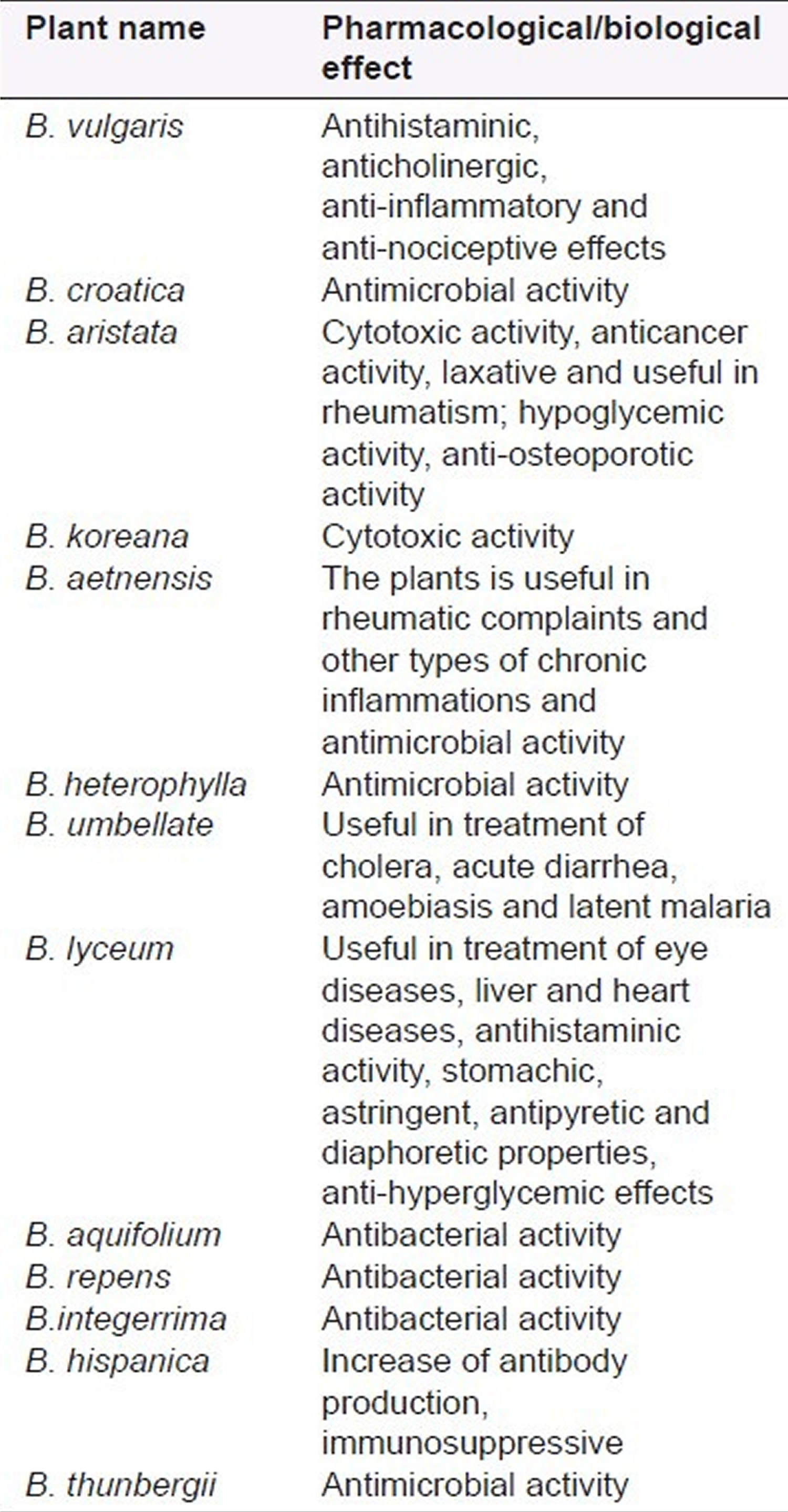 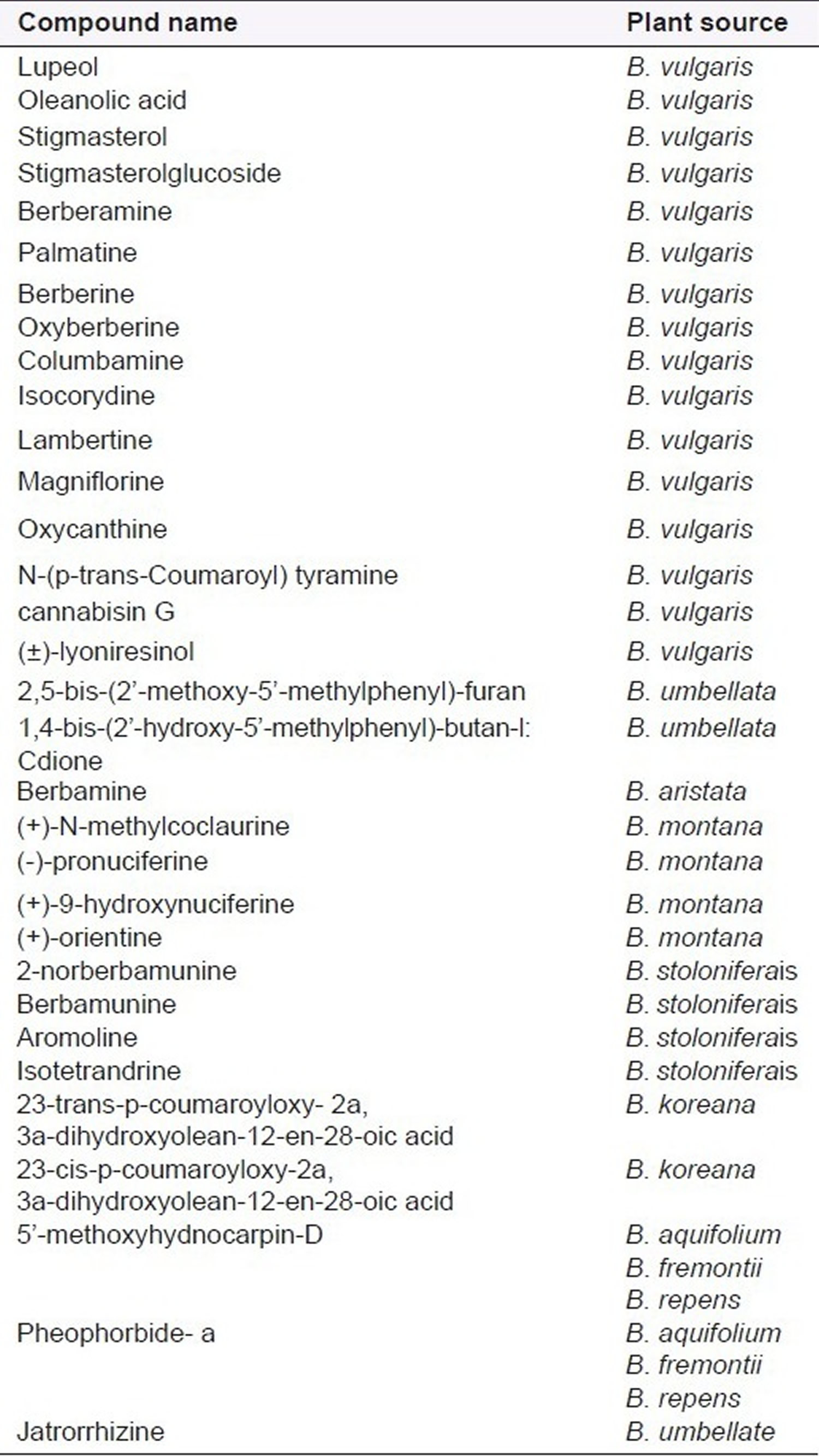 In all parts of B. vulgaris plant, certain alkaloids such as berberine, oxyaconthine, berbamine, brolicin, and columbamine are found. The amount of alkaloid is higher in the root bark than other organs of B. vulgaris. Berberine is one of the most important alkaloids of this plant that can be effective in preventing coronary artery disease and possibly reducing the levels of total cholesterol and triglyceride 56). The most important property of berbamine is to block calcium channels. This alkaloid was found to be active in the tests of lipids peroxidation in red blood cells and can exert anti-myocardial ischemia and antiarrhythmic effects. Besides that, oxyaconthine has a sympatholytic and vasodilatory agent 57).

Recently, berberine has been reported to decrease cholesterol through a mechanism different from that through which statins decrease cholesterol. If a statin and berberine are used simultaneously, they seem to control cholesterol more efficiently. In a controlled study, berberine was found to cause increase in a type of protein receptor in the liver, which could bond to cholesterol and facilitate its excretion 89). Despite extensive use and several properties of different organs of B. vulgaris, the action mechanisms of this plant remain to be clearly known. Some of these properties can be attributed to the antihistaminic and anticholinergic effects of this plant 90). There are large amounts of vitamin C in B. vulgaris fruit. Vitamin C is an antioxidant and water-soluble organic compound.

This vitamin is essential to the production and maintenance of collagen tissue and the strength of other tissues, and can help to reinforce immunity system and to speed up wound healing 91). As well, vitamin C prevents the formation of carcinogenic nitrosamines and nitrous ureas, and is considered a strong antioxidant agent and an effective cause of restoring cell enzymatic activities and electron transfer processes 92). It is also involved in the metabolism of carbohydrates, the conversion of folic acid to folinic acid, the metabolism of phenylalanine and thyrosine, the conversion of plasma transferine to liver ferritin, and the production of serotonin in the body 93).

A study on aqueous B. vulgaris fruit extract on antihistaminic and anticholinergic activities in guinea pig ileum confirmed that this extract could exert these effects 94).

Table 4. Summary of the findings on some species from genus Berberis most frequently used to treat different diseases

Many researchers reported pharmacological effects of B. vulgaris (Table 2 and 3). For example, Berberis aristata root extract caused decrease in glycemia and helped to regulate carbohydrate metabolism in diabetic rats 103). Moreover, the extract of Berberis vulgaris tree root is effective in treating and preventing the formation of stones in gastrointestinal tract 104). Berberis croatica Horvat is rich in berberine, phenol, and flavonol. The root extract of this plant can exert antimicrobial effects against Bacillus subtilis, Staphylococcus aureus, Escherichia coli, Pseudomonas aeruginosa, and Candida albicans 105). One of the main compounds of Berberis integerrima is berberine. Berberine can exert protective effects on central nervous system and help to treat the diseases of this system 106).

Moreover, this alkaloid can protect islets of Langerhans in diabetic mice and cause increase in insulin secretion, decrease in cholesterol and low-density lipoprotein, and increase in high-density lipoprotein 107). As with other fruits, B. vulgaris fruit contains salts and different vitamins including vitamin C. Ascorbic acid was found to exert positive effects on dementia progression in Alzheimer’s disease patients 108). In addition, the plasma levels of ascorbic acid were found to be lower in patients with dementia compared to the controls, representing the protective effect of ascorbic acid on the brain function and in preventing cognitive disorders 109). Moreover, ascorbic acid, a nature-based agent, has been reported to be effective in improving memory in patients and older animals 110).

Barberry side effects and toxicity

Results in animal and laboratory test tube studies have proved the potential of berberine (alkaloid derived from barberry) to induce gastrointestinal upset and ulceration, immunotoxicity, phototoxicity, neurotoxicity and cardiotoxicity in a dose dependent manner (Figure 3). Besides, there are controversial data in using berberine and its derivative during pregnancy, so the use of them should be cautioned in pregnancy and neonatal. Berberine by inhibiting adenine nucleotide translocase, promoting ROS (reactive oxygen species) formation, apoptosis and necrosis pathways induces its toxicity on both normal and cancer cell in a time and concentration dependent manner. In a biological context, ROS (reactive oxygen species) are formed as a natural byproduct of the normal metabolism of oxygen and have important roles in cell signaling and homeostasis. However, during times of environmental stress (e.g., UV or heat exposure), ROS levels can increase dramatically 114). This may result in significant damage to cell structures. Cumulatively, this is known as oxidative stress. Finally, the inhibitory effects of berberine on CYP enzymes should be mentioned which could evoke indirect toxicity. This interaction is important in co-administration with narrow therapeutic index drugs which may increase the drug plasma concentration and toxicity.

Nevertheless, as mentioned, these data mostly have been gathered from animal studies and there are differences between animals and human body, so more clinical studies in future could reveal the concealed toxicity of berberine and its derivatives. 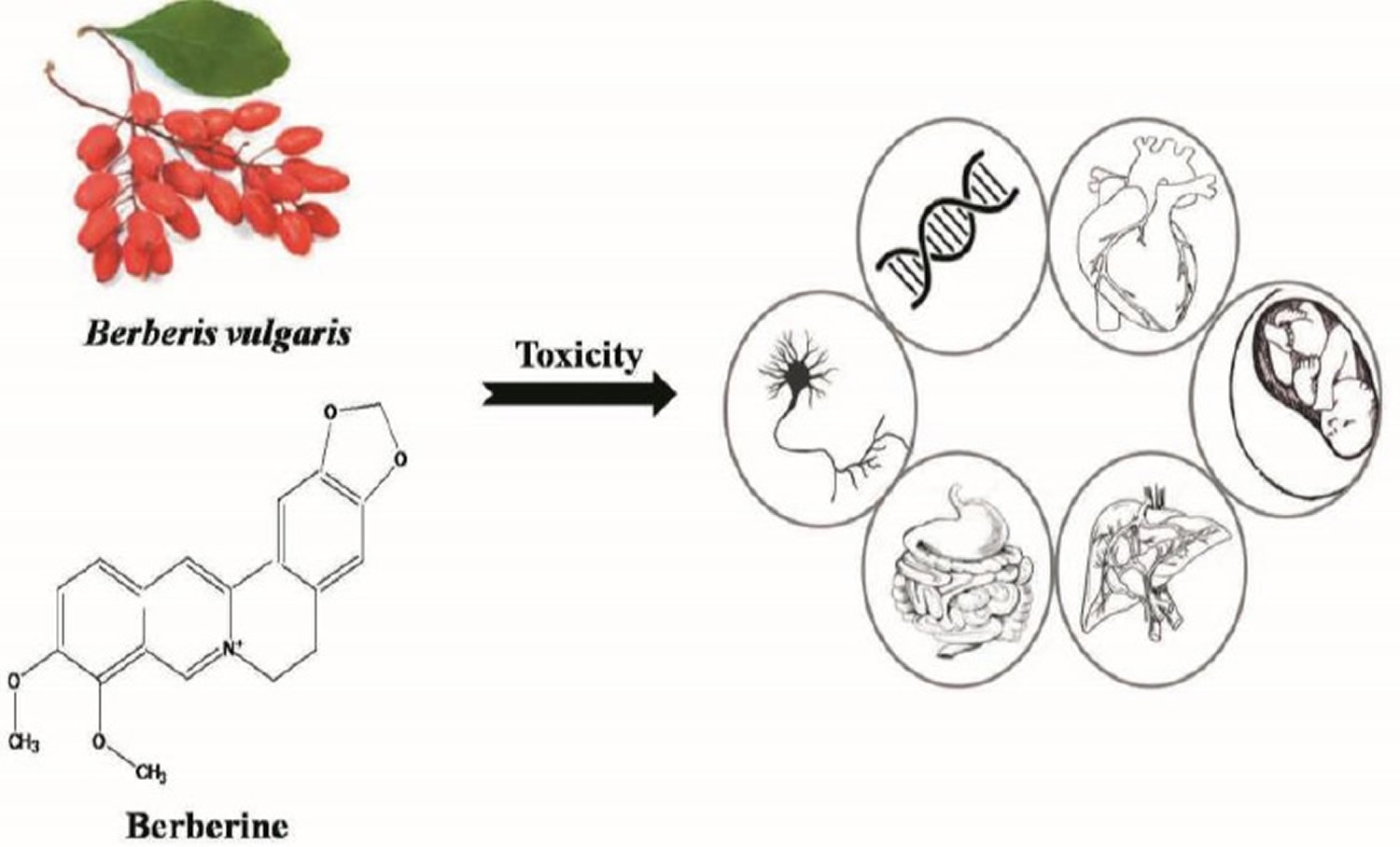