What is the larynx ? 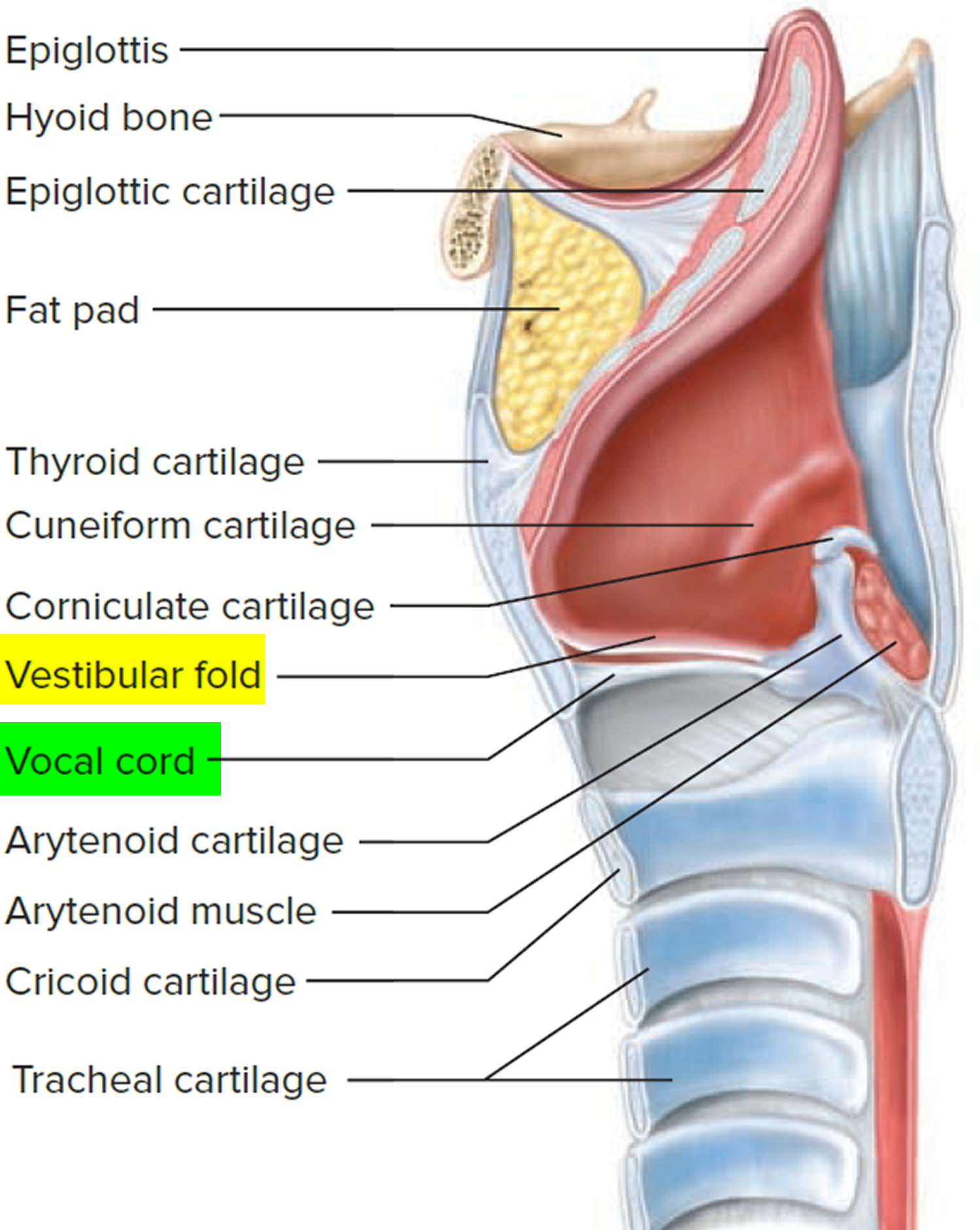 The larynx is the upper end of the lower airway. It is continuous with the trachea below and the pharynx posterosuperiorly.

The larynx is a cartilaginous chamber about 4 cm (1.5 in.) long. Its primary function is to keep food and drink out of the airway, but it evolved the additional role of sound production (phonation) in many animals; hence, we colloquially think of it as the “voice box.” 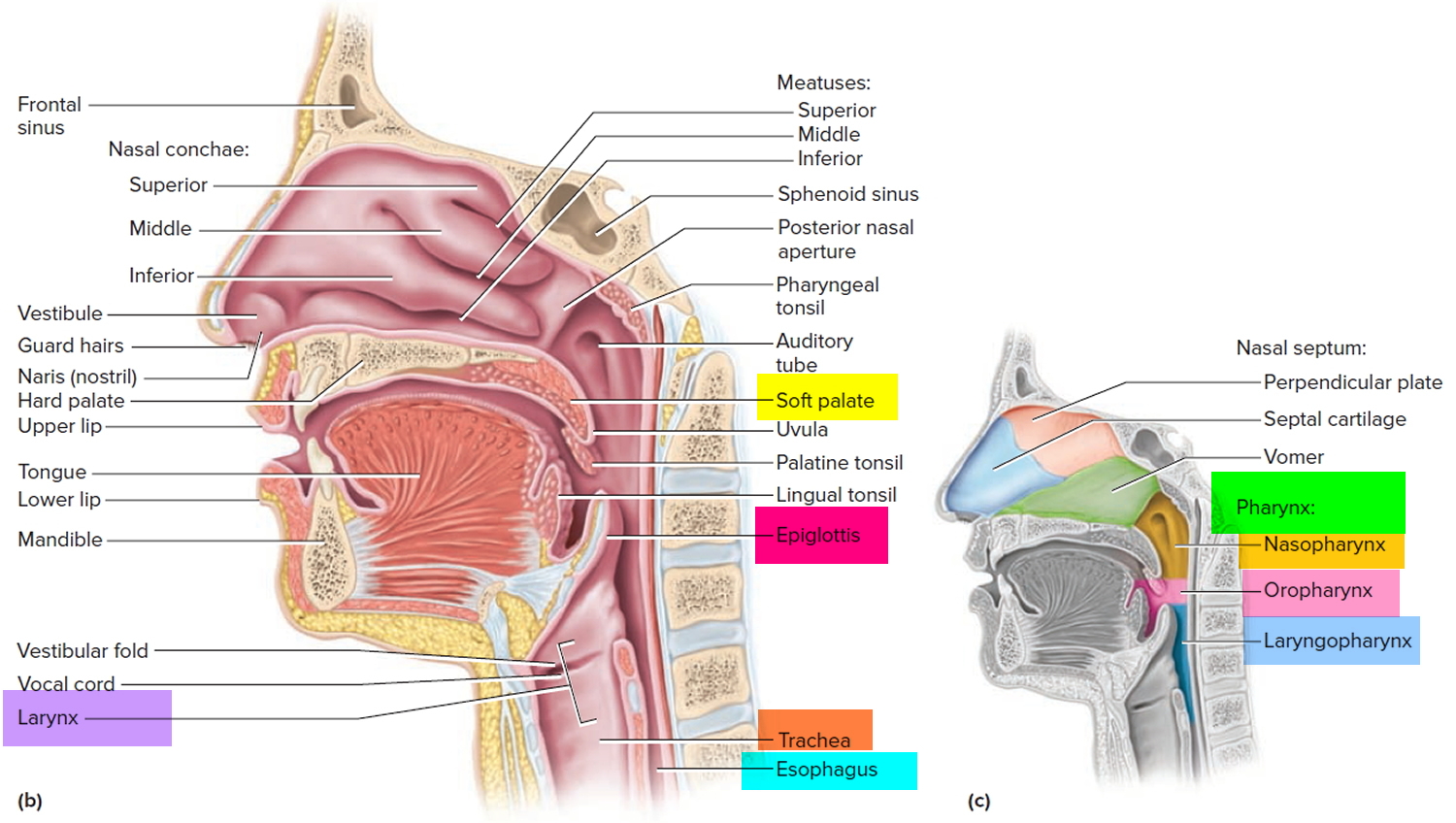 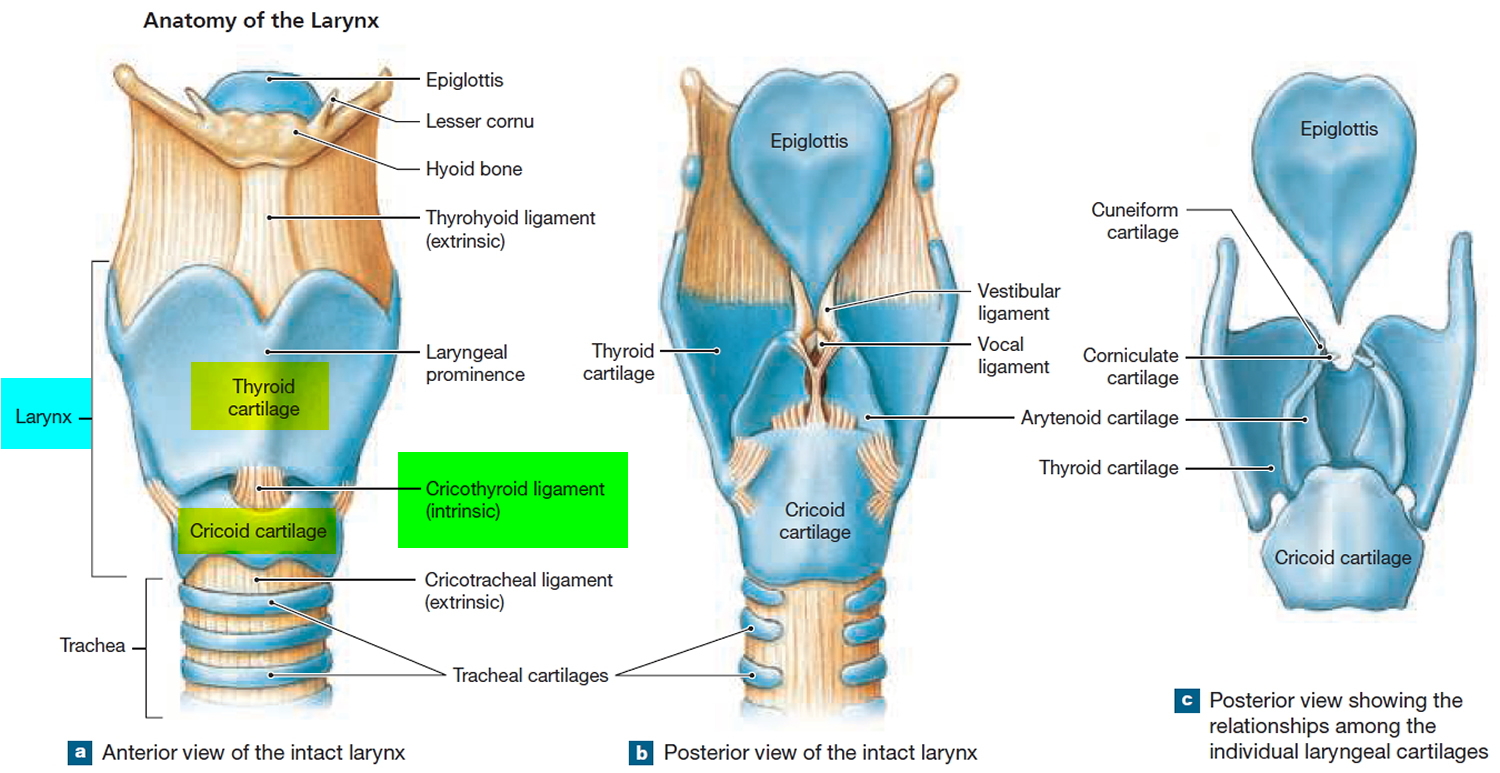 A group of fibrous ligaments binds the cartilages of the larynx together and forms a suspension system for the upper airway. A broad sheet called the thyrohyoid ligament suspends the larynx from the hyoid bone above, and below, the cricotracheal ligament suspends the trachea from the cricoid cartilage. These are collectively called the extrinsic ligaments because they link the larynx to other organs. The intrinsic ligaments are contained entirely within the larynx and link its nine cartilages to each other; they include ligaments of the vocal cords and vestibular folds. 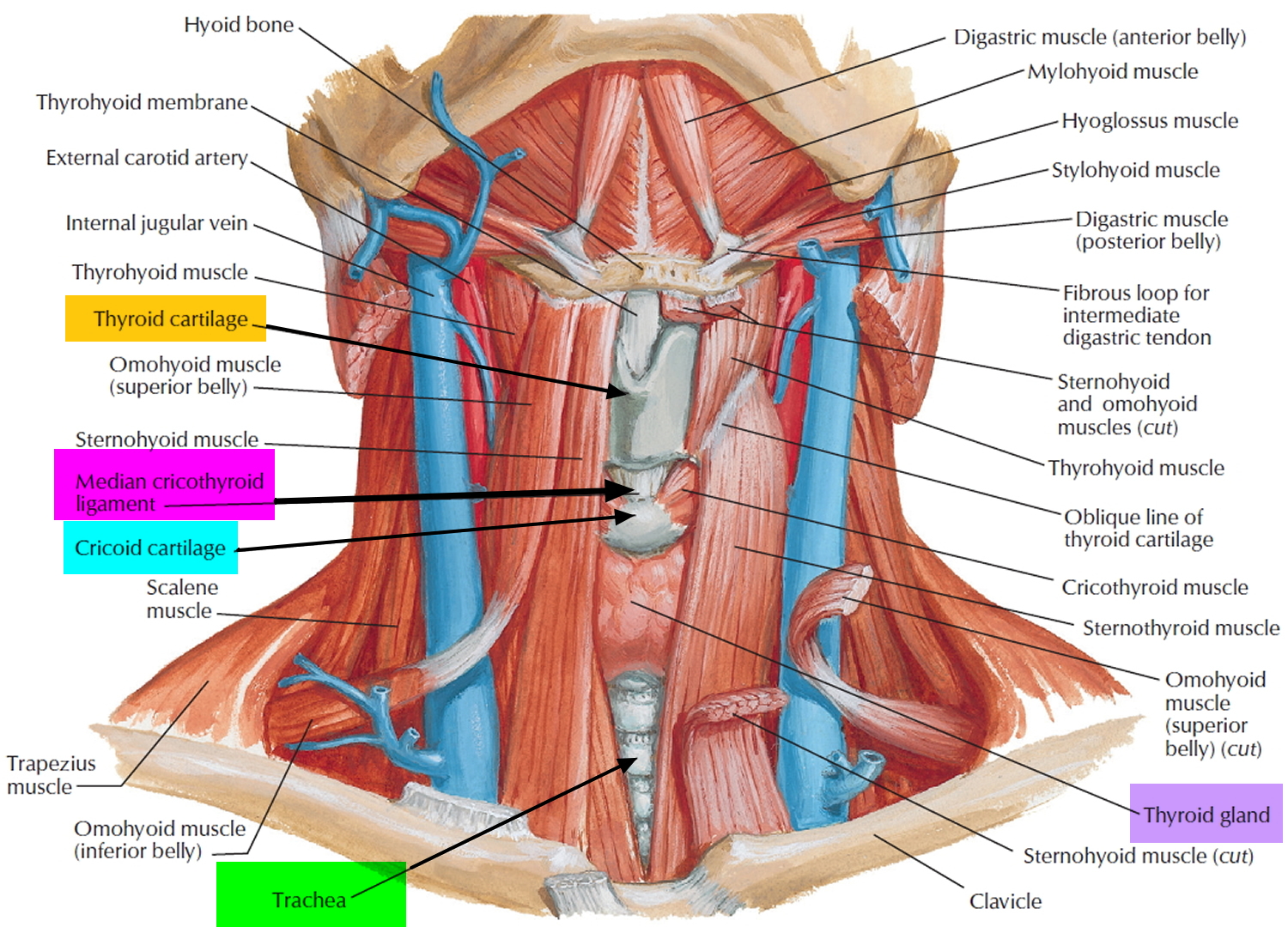 The cricothyroid ligament (cricothyroid membrane) is attached to the arch of cricoid cartilage and extends superiorly to end in a free upper margin within the space enclosed by the thyroid cartilage.

On each side, this upper free margin attaches :

The free margin between these two points of attachment is thickened to form the vocal ligament, which is under the vocal fold (true vocal cord) of the larynx. The cricothyroid ligament is also thickened anteriorly in the midline to form a distinct median cricothyroid ligament, which spans the distance between the arch of cricoid cartilage and the inferior thyroid notch and adjacent deep surface of the thyroid cartilage up to the attachment of the vocal ligaments.

In infants, the larynx is relatively high in the throat and the epiglottis touches the soft palate. This creates a more or less continuous airway from the nasal cavity to the larynx and allows an infant to breathe continually while swallowing. The epiglottis deflects milk away from the airstream, like rain running off a tent while it remains dry inside. By age 2, the root of the tongue becomes more muscular and forces the larynx to descend to a lower position. It then becomes impossible to breathe and swallow at the same time without choking.

The interior wall of the larynx has two folds on each side that stretch from the thyroid cartilage in front to the arytenoid cartilages in back. The superior vestibular folds play no role in speech but close the larynx during swallowing. They are supported by the vestibular ligaments. The inferior vocal cords (vocal folds) produce sound when air passes between them. They contain the vocal ligaments and are covered with stratified squamous epithelium, best suited to endure vibration and contact between the cords. The vocal cords and the opening between them are collectively called the glottis.

Air passing through the glottis vibrates the vocal folds and produces sound waves. Air forced between the adducted vocal cords vibrates them, producing a high-pitched sound when the cords are relatively taut and a lower pitched sound when they are more slack. Children have slender, short vocal folds, so their voices are high-pitched. At puberty the larynx of a male enlarges more than that of a female. In adult males, the vocal cords are usually longer and thicker, vibrate more slowly, and produce lower-pitched sounds than in females. Loudness is determined by the force of the air passing between the vocal cords.

Although the vocal cords alone produce sound, they do not produce intelligible speech; some anatomists have likened their sound to a hunter’s duck call. Amplification and echoing of the sound occur within the pharynx, oral cavity, nasal cavity, and paranasal sinuses. The crude sounds from the larynx are formed into words by actions of the pharynx, oral cavity, voluntary movements of the tongue, and lips.

The pharynx, is a common passageway shared by both the digestive and respiratory systems. The pharynx connects the nose, mouth, and throat. The digestive and respiratory systems share the pharynx. It extends between the posterior nasal apertures and the entrances to the trachea and esophagus. The curving superior and posterior walls are attached to the axial skeleton, but the lateral walls are flexible and muscular. The pharynx is a muscular funnel extending about 13 cm (5 in.) from the posterior nasal apertures to the larynx. The pharynx is attached above to the base of the skull and is continuous below, approximately at the level of vertebra CVI (cervical vertebrum C6), with the top of the esophagus. The walls of the pharynx are attached anteriorly to the margins of the nasal cavities, oral cavity, and larynx. Muscles of the pharynx play necessary roles in swallowing and speech.

The pharynx is subdivided into three regions (Figure 1):

The posterior apertures (choanae) of the nasal cavities open into the nasopharynx above the soft palate. The nasopharynx receives the auditory (eustachian) tubes from the middle ears and houses the pharyngeal tonsil. The nasopharynx passes only air and is lined by pseudostratified columnar epithelium. Inhaled air turns 90° downward as it passes through the nasopharynx. Relatively large particles (>10 μm) generally cannot make the turn because of their inertia. They collide with the wall of the nasopharynx and stick to the mucosa near the tonsil, which is well positioned to respond to airborne pathogens.

The narrow laryngopharynx includes the region of the pharynx lying between the hyoid bone and the entrance to the esophagus. Like the oropharynx, the laryngopharynx is lined with a stratified squamous epithelium that resists abrasion, chemicals, and pathogens.

Larynx or throat cancer is cancer of the vocal cords, larynx (voice box), or other areas of the throat 1).

People who smoke or use tobacco are at risk of developing throat cancer. Drinking too much alcohol over a long time also increases risk. Smoking and drinking alcohol combined lead to an increased risk for throat cancer.

Most throat cancers develop in adults older than 50. Men are more likely than women to develop throat cancer.

Do not smoke or use other tobacco. Limit or avoid alcohol use. 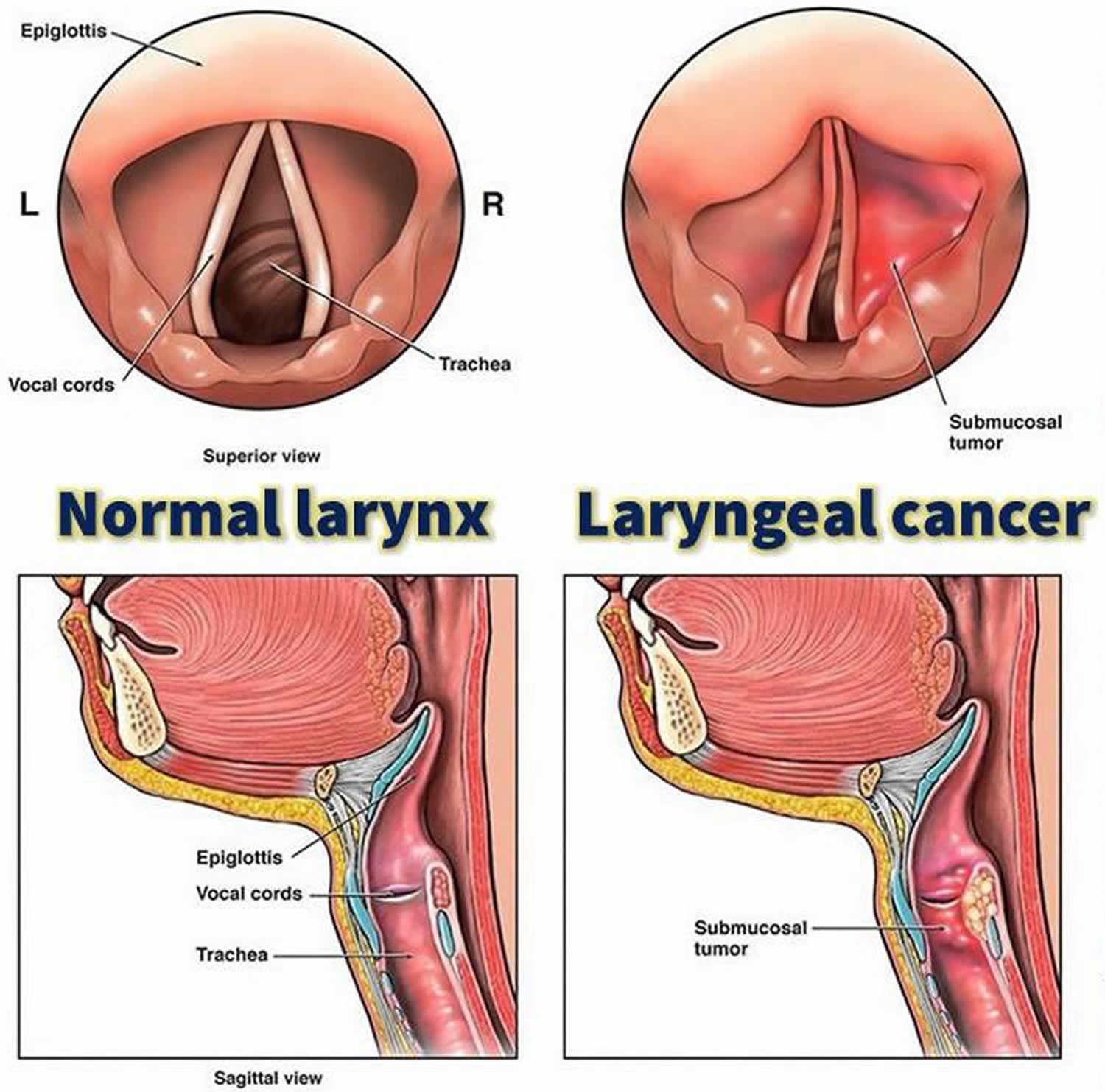 Symptoms of throat cancer include any of the following 2):

Exams and Tests for larynx cancer

The health care provider will perform a physical exam. This may show a lump on the outside of the neck.

The provider may look in your throat or nose using a flexible tube with a small camera at the end.

Other tests that may be ordered include:

The goal of treatment is to completely remove the cancer and prevent it from spreading to other parts of the body.

When the tumor is small, either surgery or radiation therapy alone can be used to remove the tumor.

When the tumor is larger or has spread to lymph nodes in the neck, a combination of radiation and chemotherapy is often used to save the voice box (vocal cords). If this is not possible, the voice box is removed. This surgery is called laryngectomy.

After treatment, therapy is needed to help with speech and swallowing. If the person is not able to swallow, a feeding tube will be needed.

Complications of this type of cancer may include: 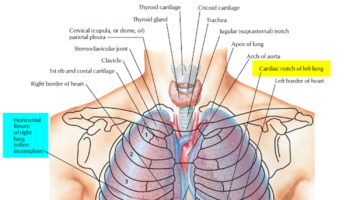 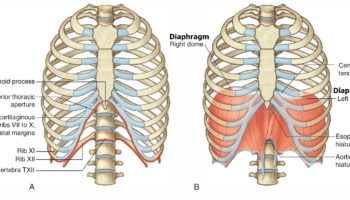 What is a diaphragm 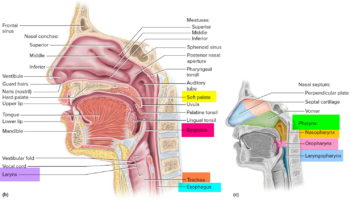 What is the pharynx ? 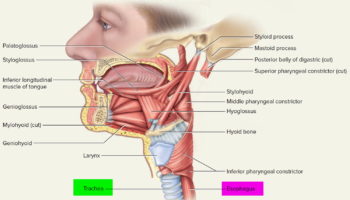