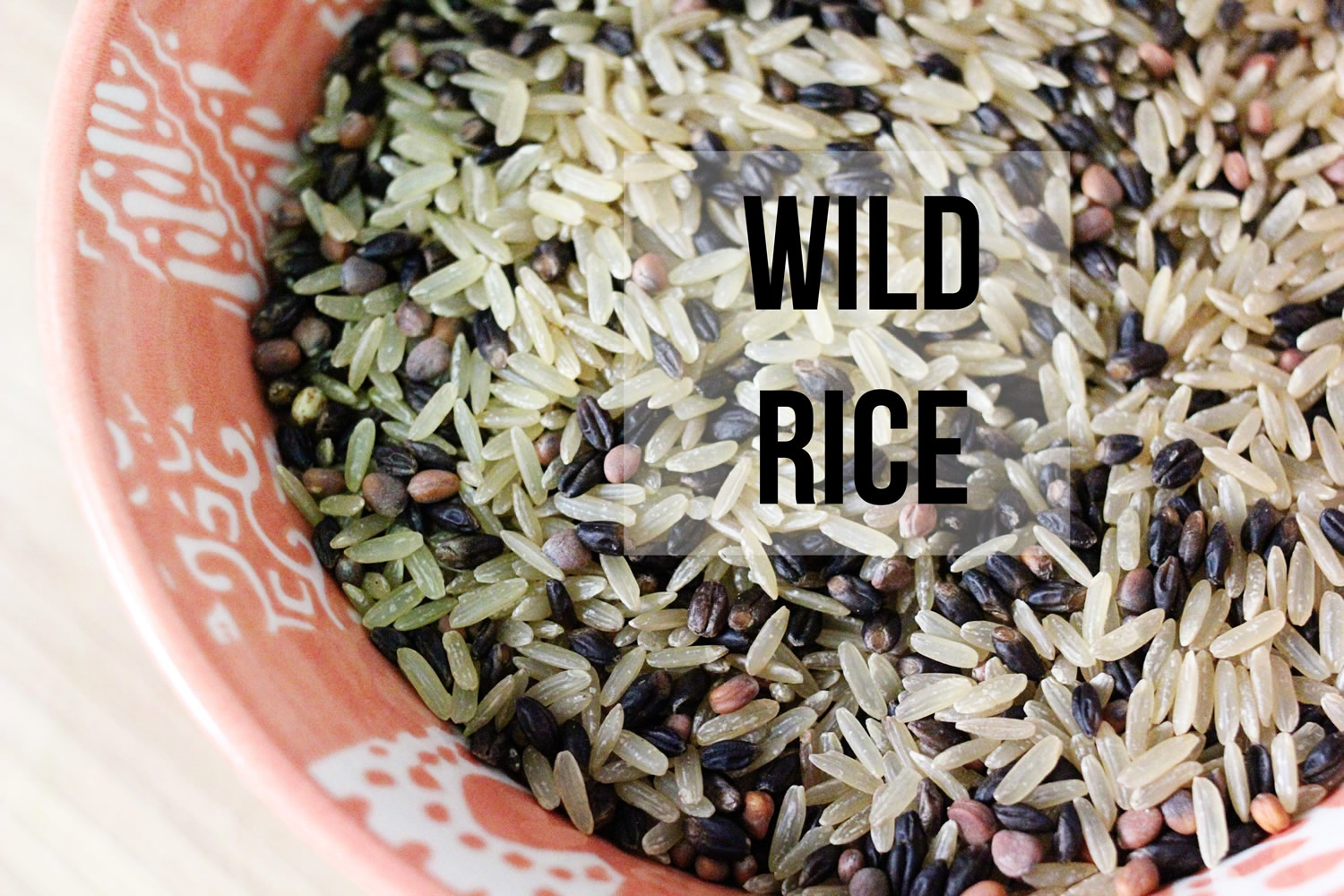 What is wild rice

Wild rice (Zizania aquatica) is not actual rice, but an aquatic grass bearing edible grains that are more closely related to oats, belonging to the genus Zizania with four known species. Wild rice is an annual aquatic grass which grows in shallow lakes, marshes and in sluggish streams in various parts of the world. The grain of wild rice has been harvested by the Indians of the United States and Canada for many centuries. Explorers entering the territories of the Northern Lake States of America a few centuries ago described wild rice as a spontaneous crop which does not require plowing or sowing providing an abundant harvest of palatable and nourishing grain. Natural propagation assured the Indians of a yearly crop. As time passed, wild rice lost its importance as a staple for the Indian population, but it became a white man’s delicacy because of its unique color and flavor characteristics. Today, most of the wild rice in the world is harvested as a cultivated crop from paddies in the state of Minnesota. Smaller amounts are produced in Wisconsin and in southern Canada.

There are four species of wild rice, including Zizania aquatica L., Zizania palustris L. and Zizania texana Hitche, are native to North America, and only one [Zizania latifolia (Griseb) Turcz] is native to China, Japan and Vietnam.

Wild rice is not directly related to Asian rice (Oryza sativa), whose wild progenitors are Oryza rufipogon and Oryza nivara, although they are close cousins, sharing the tribe Oryzeae. Wild rice grows in shallow water in small lakes and slow-flowing streams; often, only the flowering head of wild rice rises above the water. The wild rice grain is eaten by dabbling ducks and other aquatic wildlife, as well as by humans.

Wild-rice grains are naturally gluten free and have a chewy outer sheath with a tender inner grain that has a slightly vegetal taste. According to the international American Association of Cereal Chemists’ (AACC) definition, the US Food and Drug Administration published a Draft Guidance on Whole-grain Label Statements in 2006 1) – wild rice belongs to whole-grain cereals. In recent years, there has been increasing consumer awareness of wild rice, but it has not attained regular use as a staple food. More than 3000 years ago, the grain was used in Chinese herbal medicine to treat a variety of ailments associated with nutrition 2) and Japan also had a similar record. The distribution of wild rice was extensive in China, but its use as a grain has completely disappeared. North American wild rice, which is commercialized and considered as a health food, has been widely available in supermarkets and restaurants today 3). Composition analysis of wild rice reveals that it is rich in plant protein, dietary fiber, the amino acid lysine and low in fat 4). Little is known about the underlying biological function of wild rice in improving chronic metabolic disorders. Recent series of rat studies have demonstrated that consuming wild can drastically improve blood lipid profiles and suppress oxidative stress 5), 6). In those rat studies where wild rice was added to a high fat, high cholesterol diet found significant improvement of serum free fatty acids, total cholesterol, and triglyceride levels while maintaining higher high-density (HDL “good”) lipoprotein levels compared with a control diet 7). The exact explanation of the protective mechanism of wild rice is uncertain, but the dietary fiber, phytosterol, or antioxidant capacity of wild rice may be the reason for it. The findings suggest that wild rice may be used instead of white rice and processed wheat starch as a staple food in the human health diet and might serve as a potential food source for preventing nutrition-related chronic metabolic diseases. Current interest in whole grains and gluten-free diets, as well as antioxidants and phytochemicals, makes wild rice an attractive grain addition to the diet 8). However before we can recommend people start eating wild rice, well designed human studies are now needed to confirm the positive animal study findings. 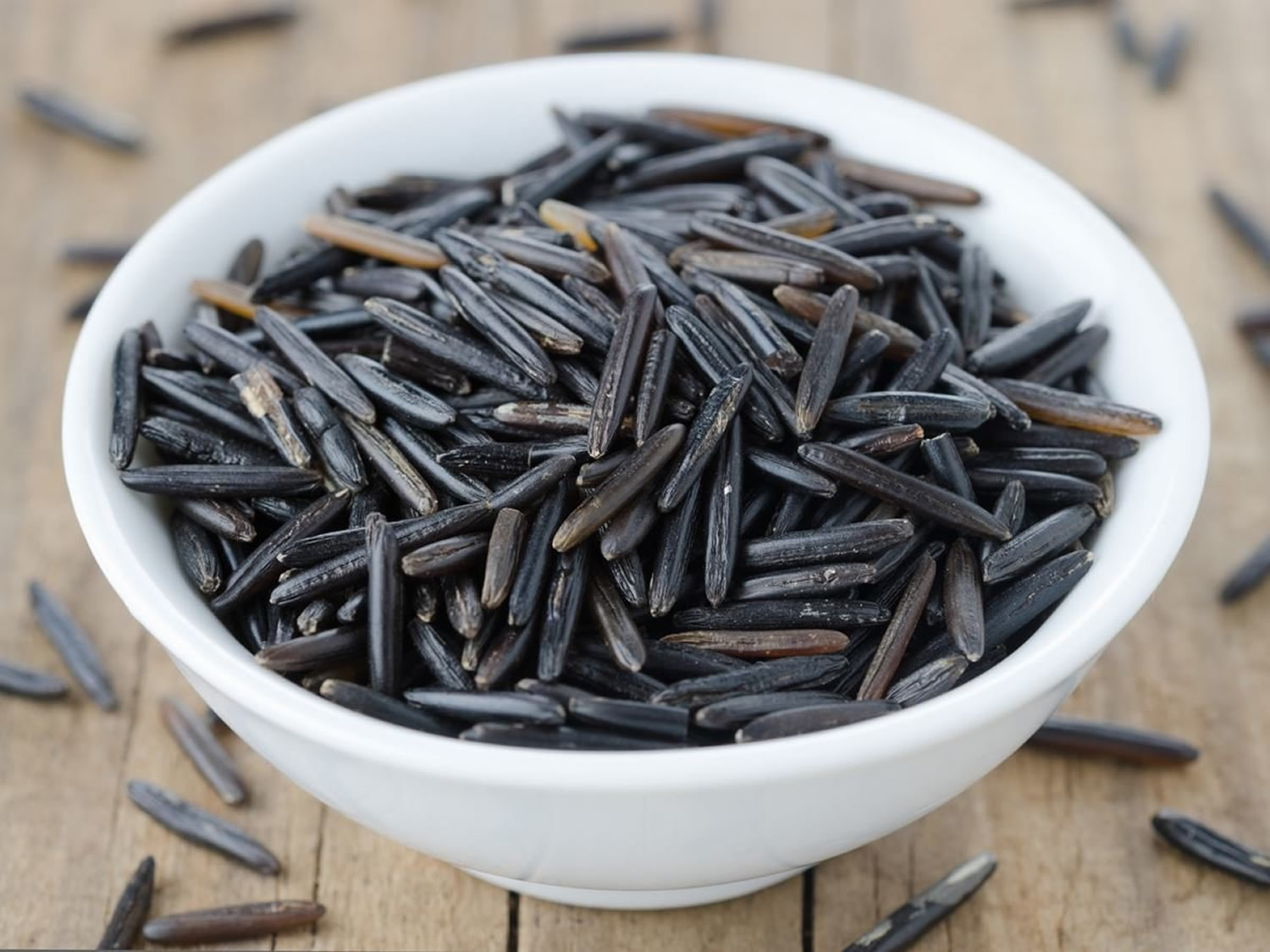 Typically sold as a dried whole grain, wild rice is high in protein, the amino acid lysine and dietary fiber, and low in fat. Wild rice is classified as a whole grain and typically contains 75% carbohydrate, 6.2% dietary fiber, 14.7% protein, and 1.1% lipids. Wild rice is a good source of dietary fiber and has nearly double the amount of protein of white rice. Wild rice lipid content is low; however, most of the lipids are essential omega-6 (35.0–37.8%) and omega-3 (20.0–31.5%) fatty acids 9). In addition to macronutrient content, wild rice contains phytosterol levels several times higher than white rice. Furthermore, the antioxidant activity of wild rice is 10–15 times higher than white rice.

Wild rice protein content is relatively high compared to other cereal grains. Nutritional analysis shows wild rice to be second only to oats in protein content per 100 calories. Wild rice is a good source of the B vitamins, thiamin, riboflavin and niacin and contains common mineral elements in amounts comparable to those in oats, wheat and corn 10). One cup of cooked wild rice provides 5% or more of the daily value of thiamin, riboflavin, iron, and potassium; 10% or more of the daily value of niacin, b6, folate, magnesium, phosphorus; 15% of zinc; and over 20% of manganese 11).