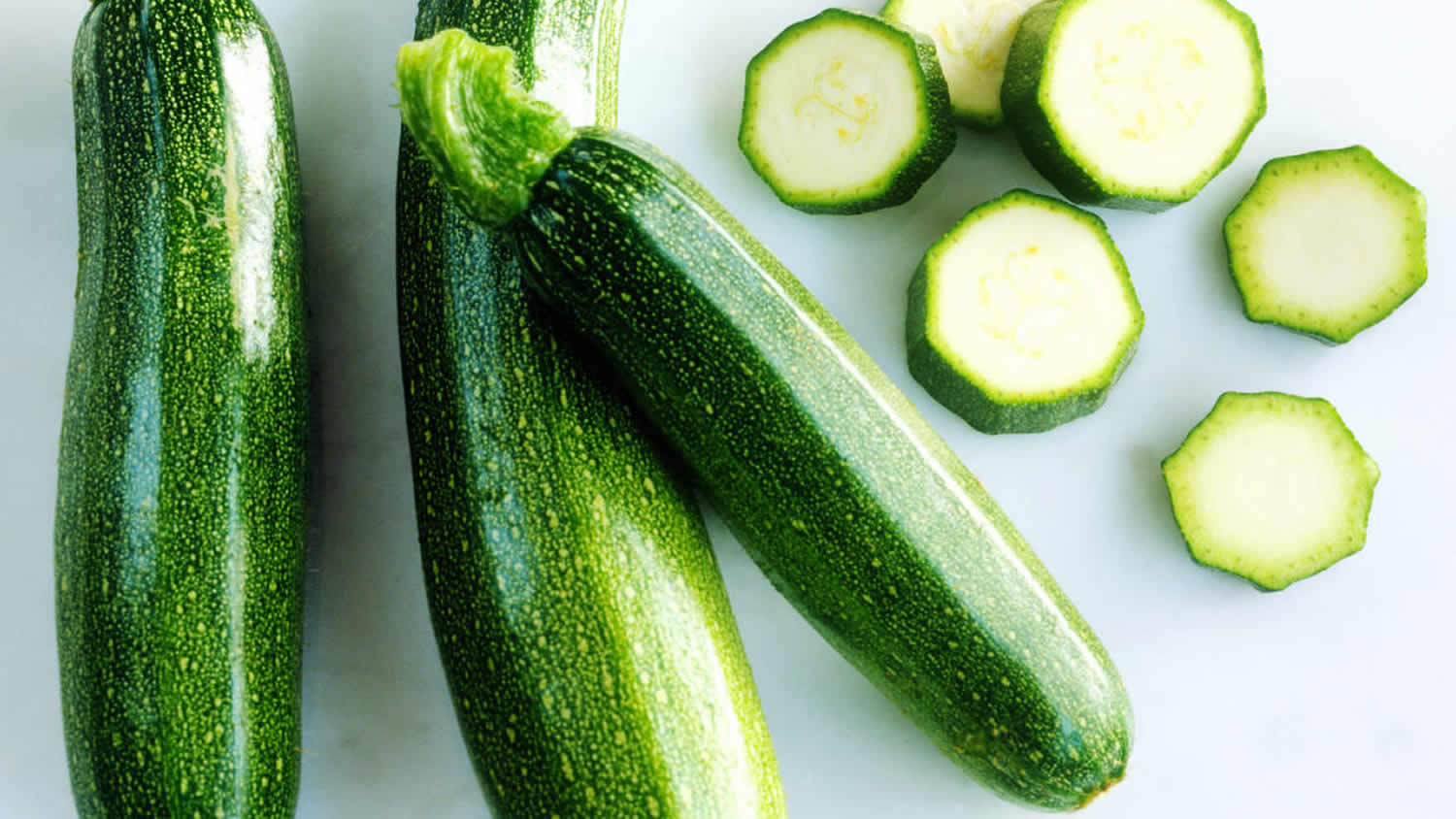 Botanically zucchini (courgette) is a fruit, it’s considered a vegetable — more specifically, is a summer squash which can reach nearly a meter in length, but is usually harvested immature at 15 to 25 cm (6 to 10 in). In Britain and Ireland a fully grown zucchini is referred to as a marrow. Along with certain other squashes and pumpkins, zucchini belongs to the species Cucurbita pepo. Zucchini can be dark or light green. A related hybrid, the golden zucchini, is a deep yellow or orange color 1).

Zucchini belongs to the species Cucurbita pepo which includes pumpkins and cucumbers. It is also known as courgette in French while the British call it vegetable marrow. The skin color can vary from light to dark green. It is best eaten prior to the skin becoming tough and seeds growing large.

The flowers of the zucchini are also edible and used regularly in French and Italian cuisine for dressing meals or for garnishing cooked fruit, offering great taste in the process. Zucchini is extensively grown in Argentina, Mexico, Turkey, Egypt China, Japan, Italy, and India amongst other countries. Though grown all year long, the peak season is in the summer months. Zucchini cannot be stored for long periods unless frozen (you can freeze grated raw zucchini, or lightly steamed slices. Make sure to pack in air-tight containers).

In a culinary context, zucchini is treated as a vegetable; it is usually cooked and presented as a savory dish or accompaniment. Botanically, zucchinis are fruits, a type of botanical berry called a “pepo”, being the swollen ovary of the zucchini flower.

Zucchini, like all squash, has its ancestry in the Americas. However, the varieties of squash typically called “zucchini” were developed in northern Italy in the second half of the 19th century, many generations after the introduction of cucurbits from the Americas in the early 16th century.

Zucchini is good for the heart. Zucchini contains good amounts of potassium that helps reduce blood pressure. It also contains moderate levels of folate that breaks down amino acids like homocysteine that cause heart attacks and strokes. The considerable amount of magnesium helps in keeping blood pressure at a normal rate and the heart beat at a steady rhythm.

Zucchini has incredibly low calories that make it a much-preferred part of any weight loss diet. Substituting calorie rich foods with a sizable portion of zucchini helps you in reducing the number of calories that are taken in. This makes it easier to burn off calories, thereby helping you lose weight. Zucchini also keeps the body hydrated with its 93 percent water content. This gives you more energy and fewer headaches.

The presence of Vitamin A in the zucchini helps in active cell development in the eyes, which enhances vision and may help in preventing age-related medical conditions affecting the eyes such as macular degeneration.

Due to zucchini being a good source of vitamin C. Vitamin C plays a role in collagen, carnitine, hormone, and amino acid formation. It is essential for wound healing and facilitates recovery from burns. Vitamin C is also an antioxidant, supports immune function, and facilitates the absorption of iron 2).

Generally, there is little variation in nutritional value between zucchini varieties. The peel is where many of the nutrients hide, so never peel summer zucchini.