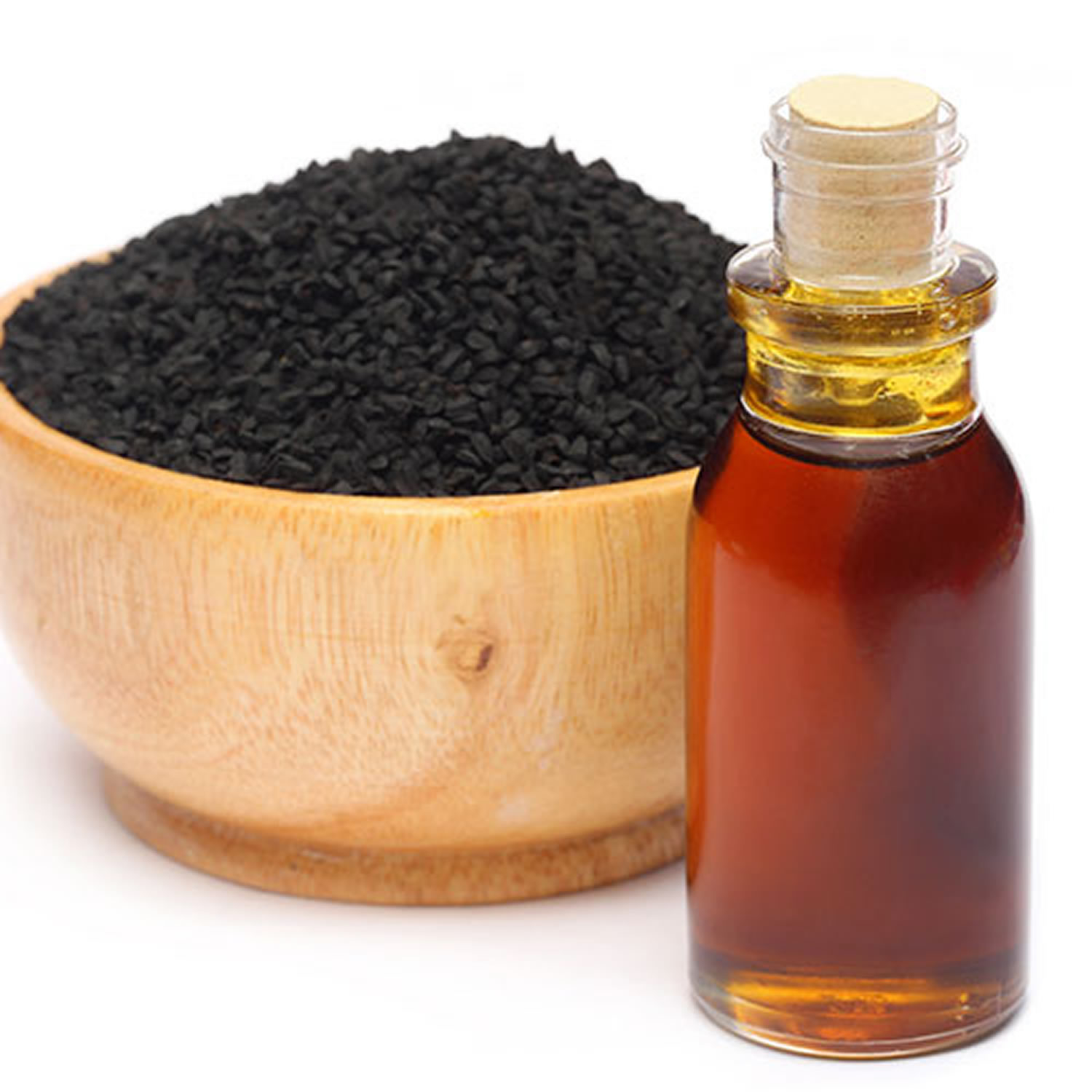 What is black seed oil

Black seed (Nigella sativa) often called black cumin or black-caraway, also known as nigella or kalonji, is an annual flowering plant in the family Ranunculaceae, native to south and southwest Asia 1). Nigella sativa plant can grow to 20-90 cm tall, with finely divided leaves, the leaf segments narrowly linear to threadlike. The flowers are delicate, and usually colored white, yellow, pink, pale blue or pale purple, with 5-10 petals. The fruit is a large and inflated capsule composed of 3-7 united follicles, each containing numerous seeds 2).

The dry-roasted black seeds flavor curries, vegetables and pulses. Black seed can be used as a “pepper” in recipes with pod fruit, vegetables, salads and poultry. In some cultures, the black seeds are used to flavor bread products. It is also used as part of the spice mixture panch phoron (meaning a mixture of five spices) and by itself in many recipes in Bengali cuisine and most recognizably in naan bread 5). Black seed is also used in Armenian string cheese, a braided string cheese called majdouleh or majdouli in the Middle East.

Black seeds reported to contain a fatty oil rich in unsaturated fatty acids, mainly linoleic acid (50-60%), oleic acid (20%), eicodadienoic acid (3%) and dihomolinoleic acid (10%) 6). Saturated fatty acids (palmitic, stearic acid) amount to about 30% or less. α-sitosterol is a major sterol, which accounts for 44% and 54% of the total sterols in Tunisian and Iranian varieties of black seed oils respectively, followed by stigmasterol (6.57-20.92% of total sterols) 7).

Some other compounds e.g. carvone, limonene, citronellol were also found in trace amounts. Most of the pharmacological properties of black seed are mainly attributed to quinine constituents, of which thymoquinone is the most abundant. On storage, thymoquinone yields dithymoquinone and higher oligocondensation products. Black seeds contain protein (26.7%), fat (28.5%), carbohydrates (24.9%), crude fibre (8.4%) and total ash (4.8 %). Black seeds are also containing good amount of various vitamins and minerals like Cu, P, Zn and Fe etc. The seeds contain carotene which is converted by the liver to vitamin A. Root and shoot are reported to contain vanillic acid 10).

Ghosheh et al. 11) described the quantification of four pharmacologically important components: thymoquinone, dithymoquinone, thymohydroquinone, and thymol, in the black seed oil by high performance liquid chromatography. Much of the biological activities of black seeds have been shown to be due to thymoquinone, the major component of the essential oil, which is also present in the fixed oil 12). Thymoquinone is considered as potent anti-oxidant 13), anti-carcinogenic and anti-mutagenic agent 14) (structure of thymoquinone is shown in Figure 1). Moreover, thymoquinone is a relatively safe compound, particularly when given orally to experimental animals 15). Alpha (α)-hederin, a pentacyclic triterpene saponin (structure: Figure 1b) isolated from the black cumin seeds of N. sativa, was also reported to have potent in vivo antitumor activity 16).

Many studies showed that black seed oil or thymoquinone has antioxidant activity and increases the activities of antioxidant enzymes such as superoxide dismutase, catalase, glutathione peroxidase etc 17). And antioxidant enzymes are clearly related to cancer- mostly their increased activities are beneficial against different types of cancer 18). Administration of black seed oil or thymoquinone can lower the toxicity of other anticancer drugs (for example, cyclophosphamide) by an up-regulation of antioxidant mechanisms, indicating a potential clinical application for these agents to minimize the toxic effects of treatment with anticancer drugs 19). 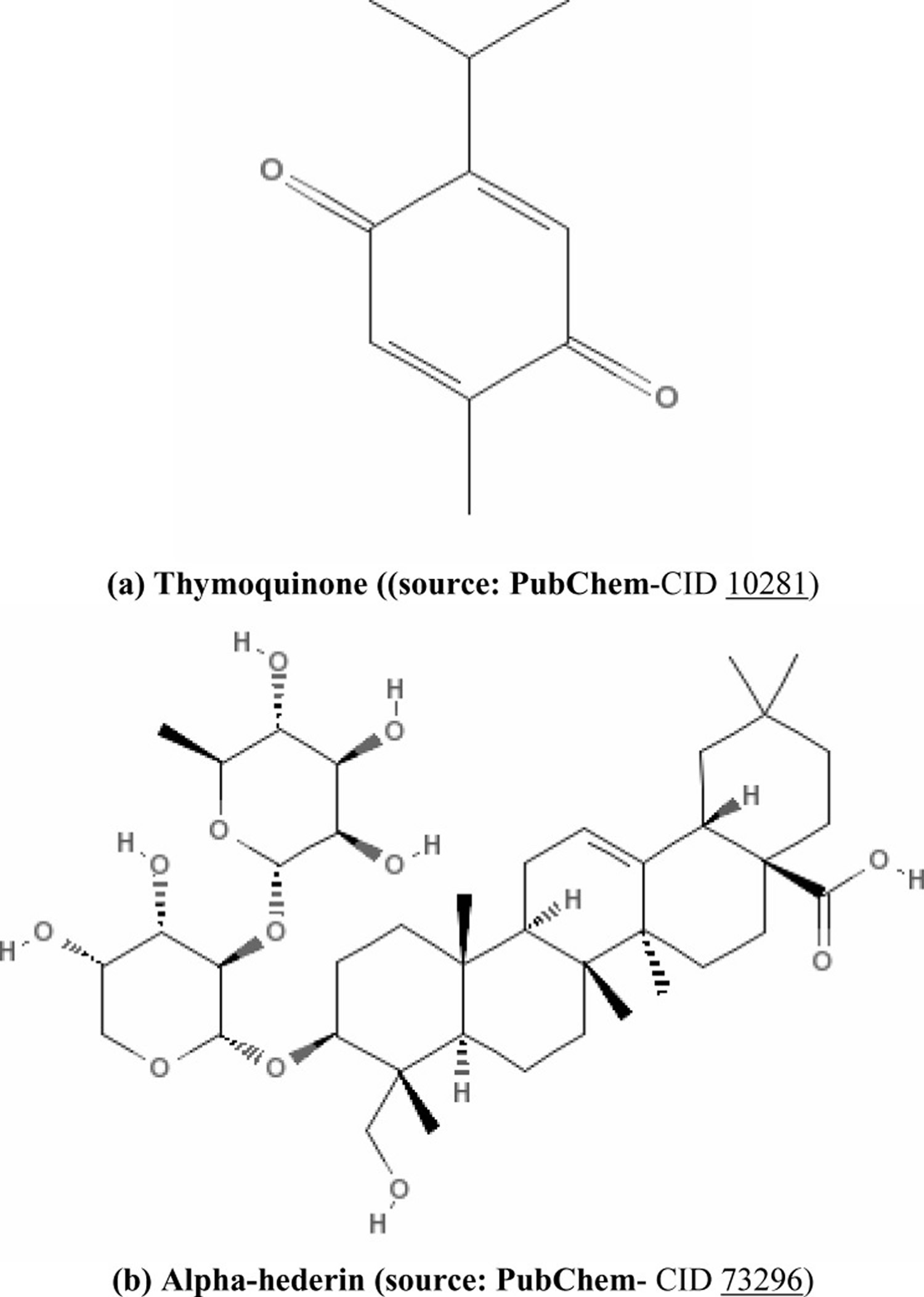 Black seed has been traditionally used for the treatment of a variety of disorders, diseases and conditions pertaining to respiratory system, digestive tract, kidney and liver function, cardio vascular system and immune system support, as well as for general well-being 20), 21).

Avicenna refers to black seeds in the “The Canon of Medicine”, as seeds stimulate the body’s energy and helps recovery from fatigue and dispiritedness. Black seeds and their oil have a long history of folklore usage in Indian and Arabian civilization as food and medicine 22), 23). The seeds have been traditionally used in Southeast Asian and the Middle East countries for the treatment of several diseases and ailments including asthma, bronchitis, rheumatism and related inflammatory diseases. Its many uses have earned Nigella the Arabic approbation ‘Habbatul barakah’, meaning the seed of blessing. A tincture prepared from the seeds is useful in indigestion, loss of appetite, diarrhoea, dropsy, amenorrhoea and dysmenorrhoea and in the treatment of worms and skin eruptions. Externally the oil is used as an antiseptic and local anesthetic. Roasted black seeds are given internally to stop the vomiting 24).

In the traditional system of medicine practised in the Arabian Gulf region, Black Seed is recommended for a wide range of ailments, including fever, cough, bronchitis, asthma, chronic headache, migraine, dizziness, chest congestion, dysmenorrhea, obesity, diabetes, paralysis, hemiplagia, back pain, infection, inflammation, rheumatism, hypertension, and gastrointestinal problems such as dyspepsia, flatulence, dysentery, and diarrhea. It has been used as a stimulant, diuretic, emmenagogue, lactagogue, anthelmintic, and carminative 26). Black Seed has also been used externally where it is applied directly to abscesses, nasal ulcers, orchitis, eczema, and swollen joints.

The results of extensive pharmacological studies (in test tubes and on animal) on black seed and black seed oil found Black Seed have:

Aqueous and alcohol extracts of black cumin seeds were found to be effective in vitro in inactivating MCF-7 breast cancer cells 56). Black cumin seeds, in combination with melatonin and retinoic acid reduced the carcinogenic effects of DMBA (7, 12-di-methylbenz(a)anthracene) in mammary carcinoma of rats 57). Terpene-terminated 6-alkyl residues of Thymoquinone were tested in MCF-7/Topo breast carcinoma by Effenberger et al. 58). They found the derivatives inducing cell death by apoptosis.

Gali-Muhtasib et al. 59) suggested that thymoquinone is anti-neoplastic and pro-apoptotic against colon cancer cell line HCT116. Salim and Fukushima 60) demonstrated that the volatile oil of black seed has the ability to inhibit colon carcinogenesis of rats in the post-initiation stage, with no evident adverse side effects. Norwood et al. 61) suggested thymoquinone as chemotherapeutic agent on SW-626 colon cancer cells, in potency, which is similar to 5-flurouracil in action. However, on HT-29 (colon adenocarcinoma) cell, no effect of thymoquinone was found 62).

Chehl et al. 63) showed that thymoquinone, the major constituent of N. sativa oil extract, induced apoptosis and inhibited proliferation in PDA (pancreatic ductal adenocarcinoma) cells. They also suggested thymoquinone as a novel inhibitor of pro-inflammatory pathways, which provides a promising strategy that combines anti-inflammatory and proapoptotic modes of action. Thymoquinone also can abrogate gemcitabine- or oxaliplatin-induced activation of NF-kappa B, resulting in the chemosensitization of pancreatic tumors to conventional therapeutics 64). The high molecular weight glycoprotein mucin 4 (MUC4) is aberrantly expressed in pancreatic cancer and contributes to the regulation of differentiation, proliferation, metastasis, and the chemoresistance of pancreatic cancer cells. Torres et al. 65) evaluated the down-regulatory effect of thymoquinone on MUC4 in pancreatic cancer cells. But in a study, Rooney and Ryan 66) did not find any preventive role of thymoquinone on MIA PaCa-2 (pancreas carcinoma) cells.

The cytotoxic activity of N. sativa seed was tested on the human hepatoma HepG2 cell line by Thabrew et al. 67), and 88% inhibitory effect on HepG2 was found after 24-hr incubation with different concentrations (0–50 mg/ml) of the N. sativa extract. Nagi and Almakki 68) reported that oral administration of thymoquinone is effective in increasing the activities of quinone reductase and glutathione transferase and makes thymoquinone a promising prophylactic agent against chemical carcinogenesis and toxicity in hepatic cancer

Swamy and Huat 69) mentioned the antitumor activity of α-hederin from black cumin seed against LL/2 (Lewis Lung carcinoma) in BDF1 mice. Also, Mabrouk et al. 70) showed that supplementation of diet with honey and N. sativa has a protective effect against MNU (methylnitrosourea)-induced oxidative stress, inflammatory response and carcinogenesis in lung, skin and colon. However, Rooney and Ryan 71) reported that α-hederin and thymoquinone, the two principal bioactive constituents of N. sativa enhance neither cytotoxicity nor apoptosis in A549 (lung carcinoma), HEp-2 (larynx epidermoid carcinoma) cells.

Thymoquinone from black cumin seed was administrated (0.01% in drinking water) one week before and after MCA treatment significantly inhibited the tumor incidence (fibrosarcoma) and tumor burden by 43% and 34%, respectively, compared with the results in the group receiving MCA alone. Moreover, Thymoquinone delayed the onset of MCA-induced fibrosarcoma tumors. Also in vitro studies showed that Thymoquinone inhibited the survival of fibrosarcoma cells with IC50 of 15 mM 73). Black cumin seed oil also decreased the fibrinolytic potential of the human fibrosarcoma cell line (HT1080) in vitro 74).

Many toxicological studies have been carried out on black seeds. It has been shown that no toxic effects were reported when black seed oil was given to mice via the stomach in an acute study. In a chronic toxicity study rats treated daily with an oral dose for 3 months caused no changes in key hepatic enzyme levels particularly aspartate-aminotransferase, alanine-aminotranferase, and gammaglutamyl-transferase 80). Moreover, the histopathological results also showed to be normal for the tissues of heart, liver, kidneys and pancreas LD50 (LD 50 is a lethal dose, the amount of an ingested substance that kills 50 percent of a test sample. It is expressed in mg/kg, or milligrams of substance per kilogram of body weight) values of black seed oil of N. sativa obtained by single doses orally and intraperitoneally in mice, were reported to be 26.2-31.6 mg/kg and 1.86-2.26 mg/kg, respectively. The low toxicity of black seed oil, evidenced by high LD50 values, key hepatic enzyme stability and organ integrity, suggests a wide margin of safety for therapeutic doses of black seed oil 81). In another study, the LD50 of thymoquinone was found to be 104.7 mg/kg (89.7-119.7) and 870.9 mg/kg (647.1-1 094.8) after intra-peritoneal injection and oral ingestion respectively. Whereas, LD50 in rats was found to be 57.5 mg/kg (45.6-69.4) and 794.3 mg/kg (469.8-1 118.8) after intra-peritoneal injection and oral ingestion respectively. The LD50 values presented here after intra-peritoneal injection and oral gavages are 10-15 times and 100-150 times greater than doses of thymoquinone reported for its anti-inflammatory, anti-oxidant and anti-cancer effects. These observations revealed that thymoquinone is a relatively safe compound, particularly when given orally to experimental animals 82), 83).