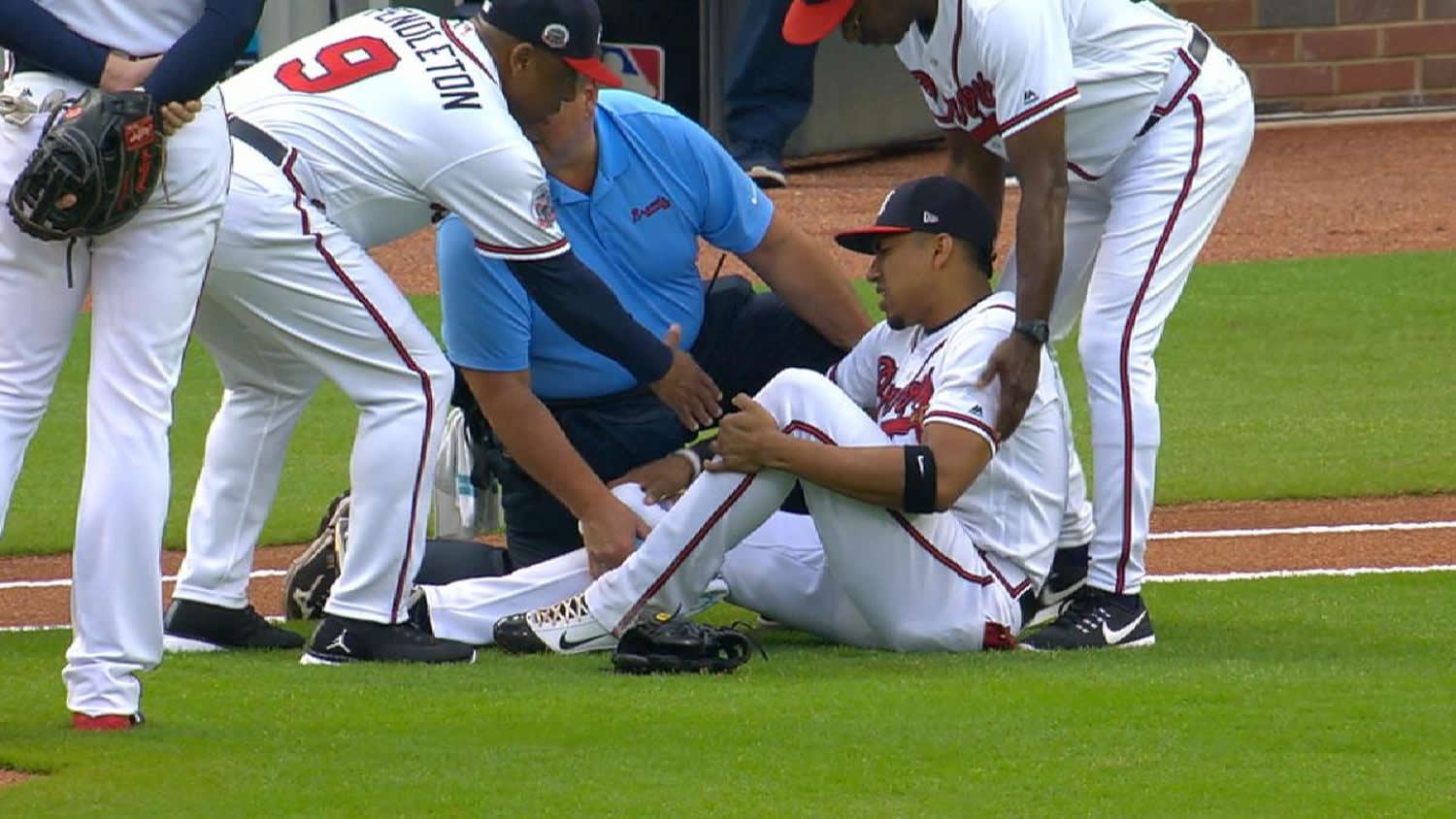 What is a bone bruise

In 1988, Wilson et al 3) introduced the term “bone marrow edema” in describing a group of patients with traumatic debilitating knee and hip pain. On T2-weighted magnetic resonance (MR) images, they recognized an ill-deﬁned hyperintensity in the bone marrow where standard (x-ray images) radiographs showed nonspeciﬁc osteopenia or normal findings. This discrepancy in the imaging studies was labeled bone marrow edema owing to the “lack of a better term and to emphasize the generic character of the condition.” The proposed pathogenesis of these marrow changes asserts that increased blood pooling, edema, reactive hyperemia, and possible microfracture of the trabecular subchondral bone alter the marrow signal intensity 4). In time, “bone marrow edema” earned the name “bone bruise” to reflect its traumatic nature 5).

Most of what we know about the incidence and prevalence of bone bruises comes from studies involving the knee, in particular after anterior cruciate ligament (ACL) tear.

Vellet’s study 7) of 120 patients with acute traumatic haemarthroses (bleeding into the joint space) of the knee identified bone bruising in 72% of patients. Bone bruises are seen in 80% of patients with an acute ACL injury 8). The phenomenon is also seen in conjunction with meniscal, posterior cruciate and collateral ligament injuries of the knee.

Other anatomical sites where bone bruises have been identified include the hip, ankle, elbow, foot and spine. As they can only be detected on expensive MRI scanning, it is likely that most of these bone bruises go unrecognized.

Though occult bone lesions may occur wherever there is direct trauma to bone, most knee and ankle sprains are the result of forceful twisting injuries. It is thought that the bone bruises are caused as adjacent bones are forcefully impacted (‘kissing contusions’). In ACL tears, bone bruises are mainly seen in the lateral tibial plateau (outer top edge/surface of tibia) and femoral condyle (lower end of the femur), which is consistent with the valgus (outward force) mechanism of injury.

Why some people with the same injury get bone bruises and others don’t can be put down to variations in the exact mechanism and force of each individual injury. 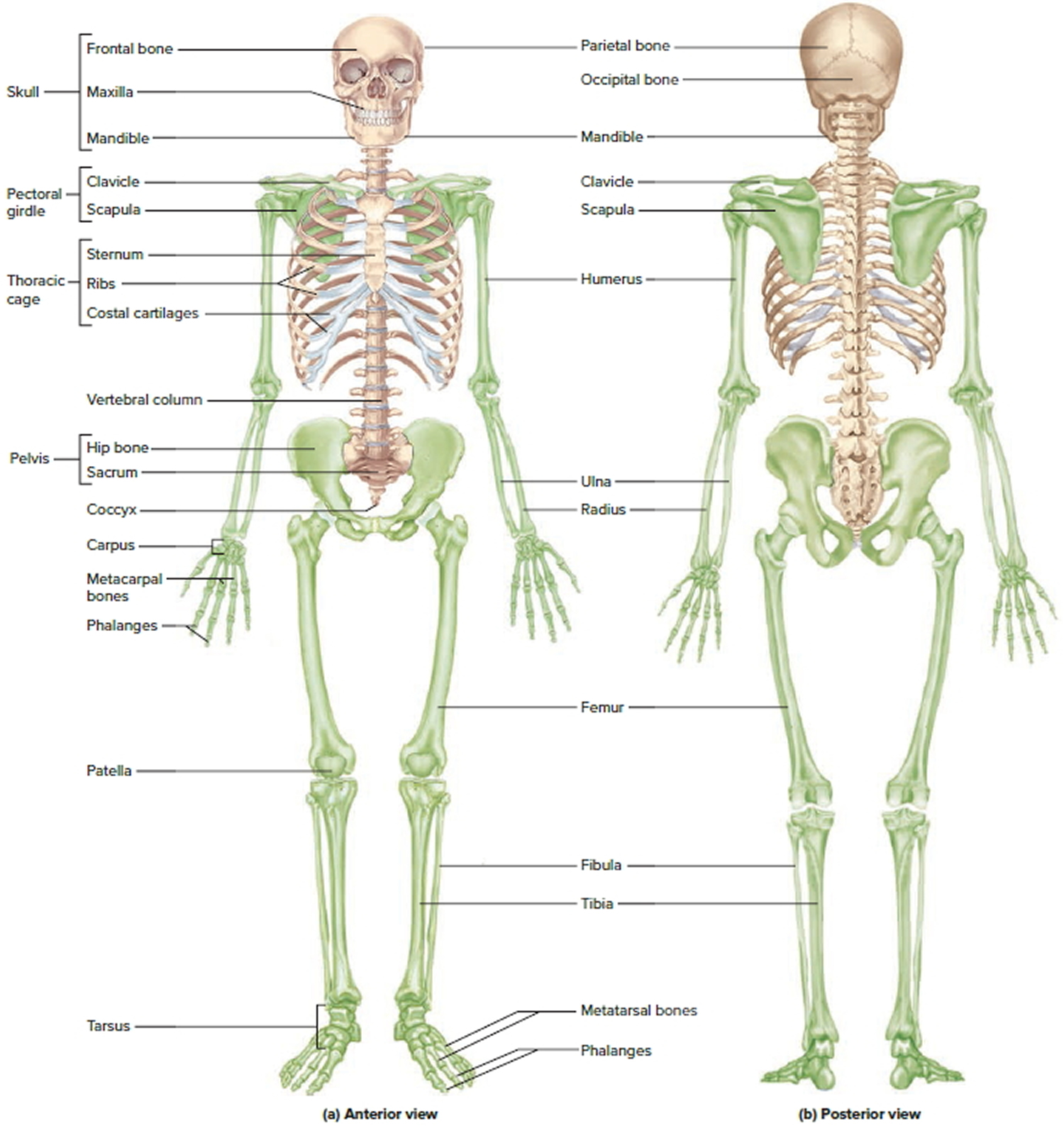 Figure 2. Parts of a long bone 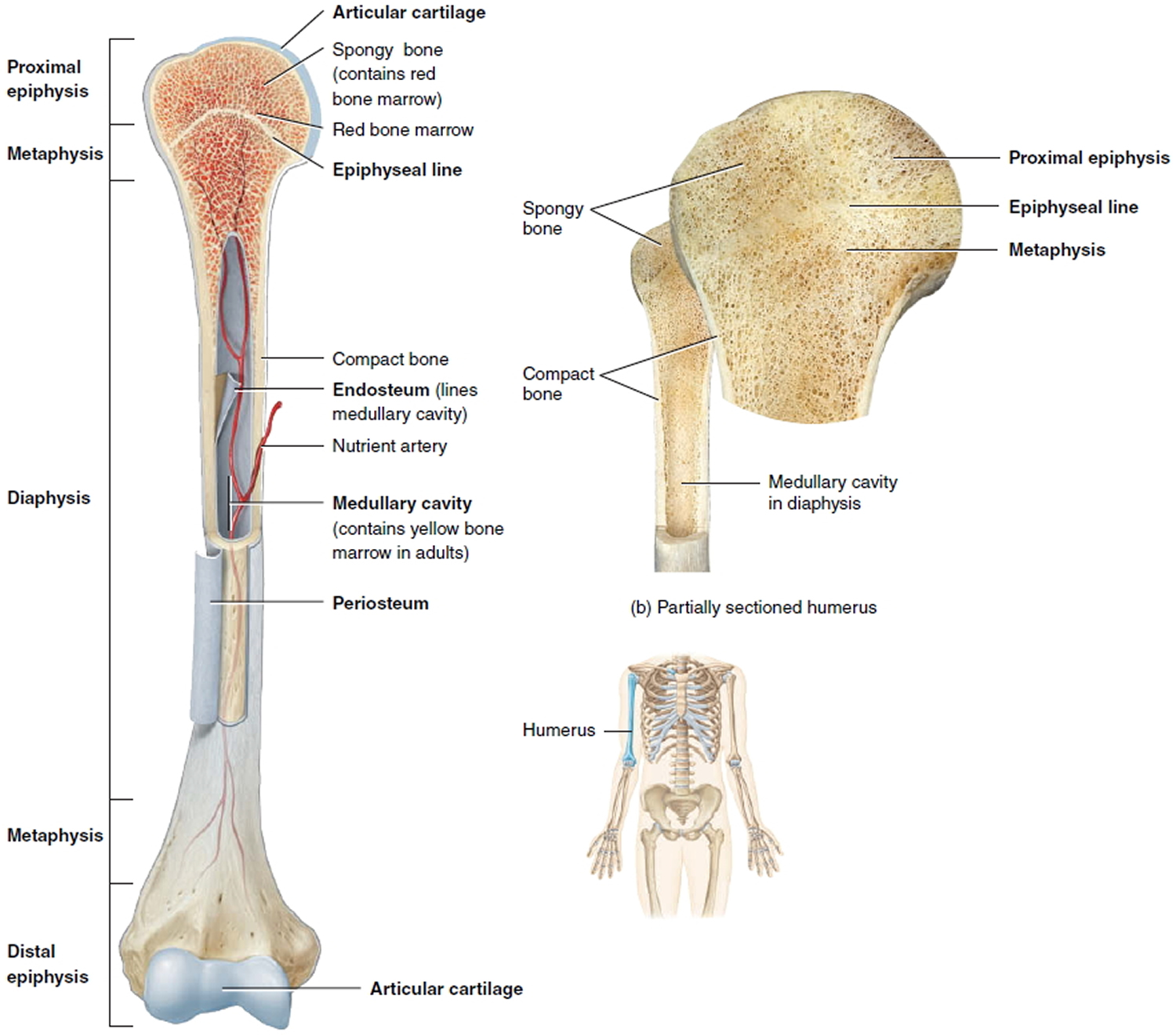 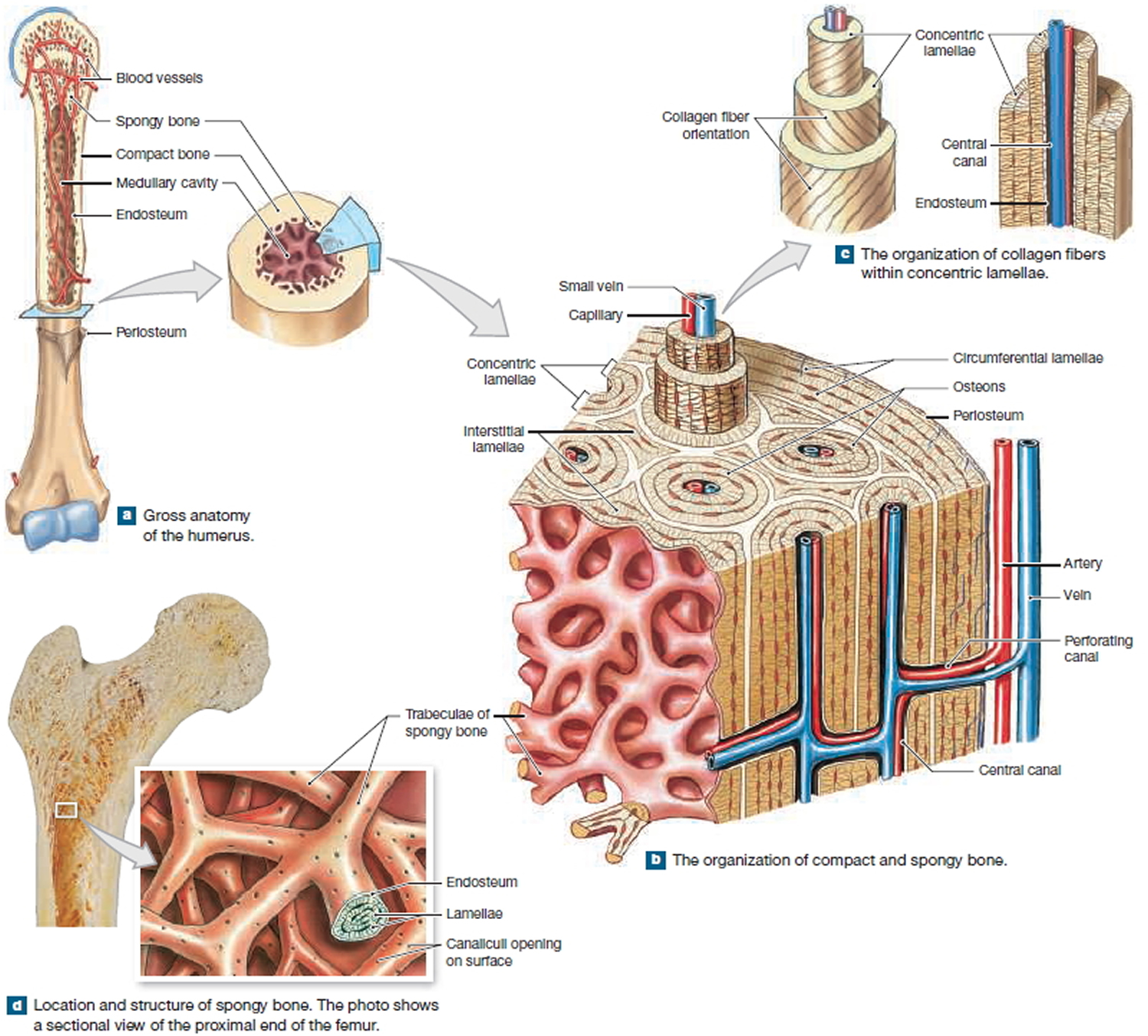 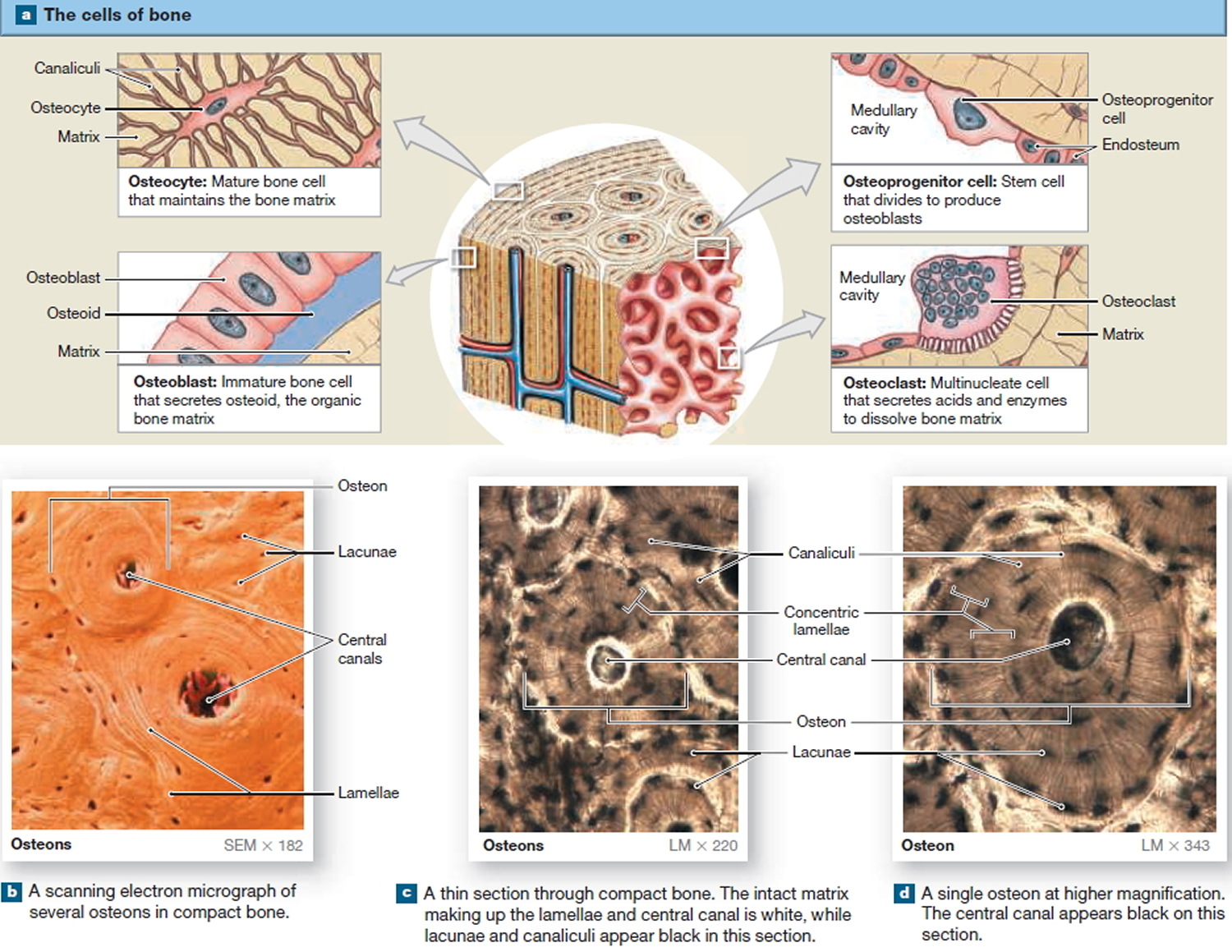 The subcortical marrow cavity consists of cancellous bone that usually demonstrates fatty marrow at all ages. The normal marrow signal on MRI parallels that of subcutaneous fat-high on conventional T1-weighted and intermediate on T2-weighted spin echo sequences. A typical bone bruise appears as an area of signal loss on T1 images and high signal intensity on T2 images, as a result of increased water content in the injured marrow. Further information can be gained with Short T1 Inversion Recovery (“STIR”) imaging when signal from normal medullary fat is markedly suppressed and bone bruises show increased intensity (Figure 6). Distinction between bone bruising and marrow oedema syndromes is primarily based on a clinical history of trauma, as the radiological features are largely indistinguishable.

Several classification systems have been proposed. Most authors agree on the differentiation between reticular and geographic/demarcated pattern. Others stress the importance of the location – subchondral vs at distance of joint space. Costa-Paz et al 10) proposes the following classification:

Another classification for the 3 different kinds of bone bruises 11), 12):

For the three types: an extreme compressive force can include jumping or the impact from running on hard surfaces. 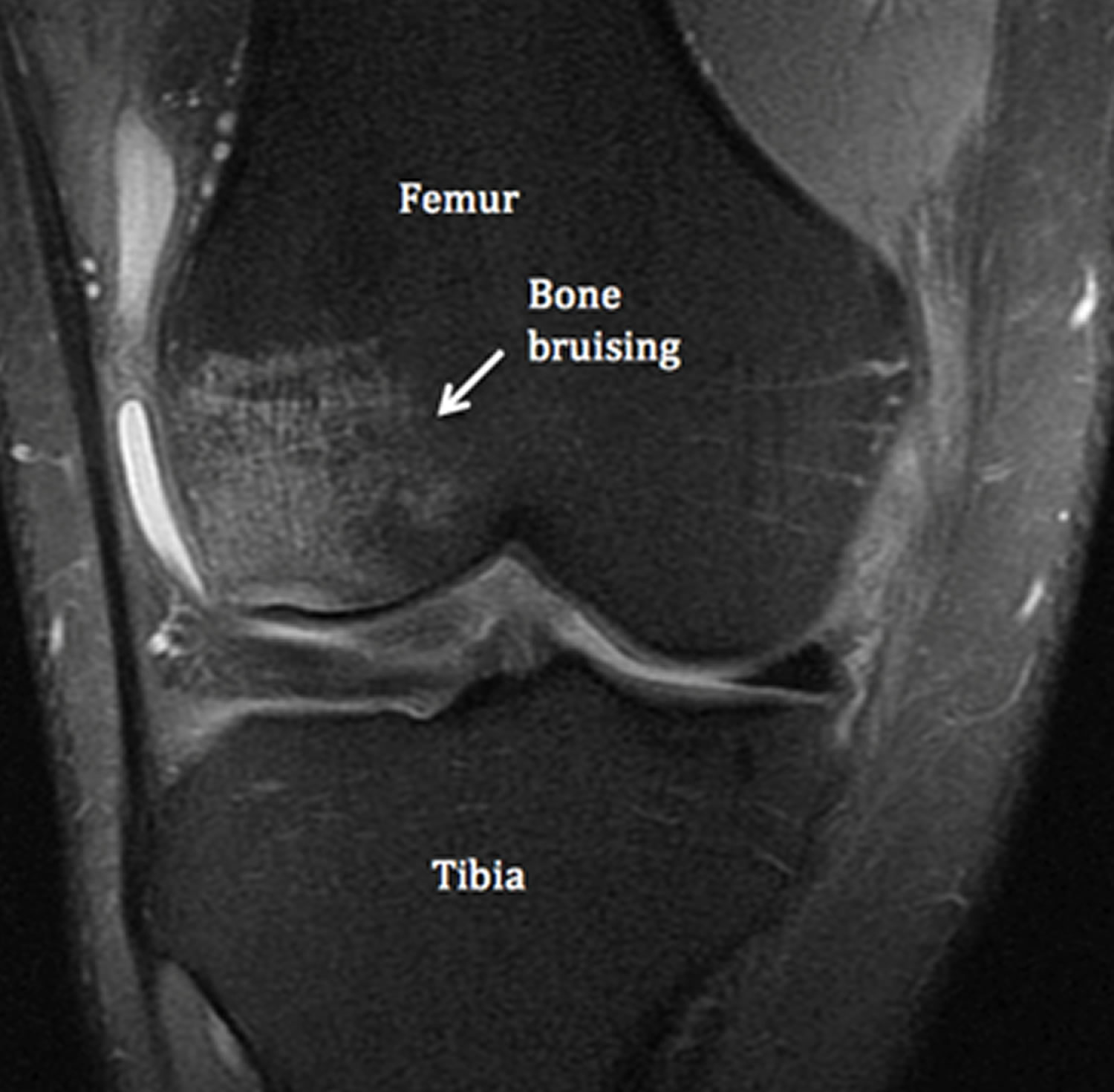 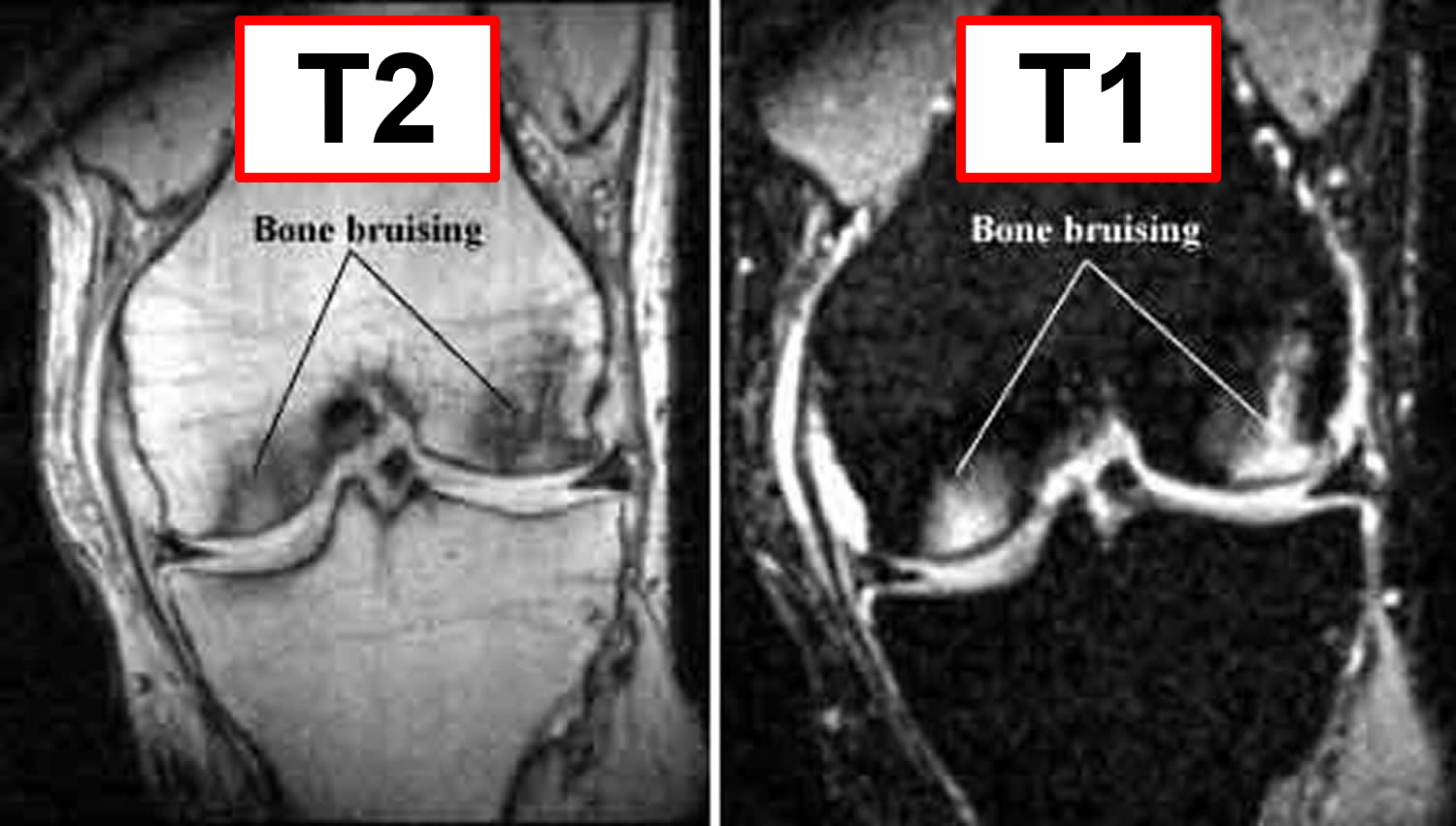 Difficulty arises in identifying clinical signs and symptoms directly attributable to the bone bruising, because of the spectra of associated injuries. However, patients with contusions appear to have a more protracted clinical recovery, with greater effusions and pain scores at matched time intervals and a slower return of motion 13).

Arthroscopic evidence of damage to the joint surface overlying bone bruises is not universally supported in the literature. Several authors found no arthroscopic evidence of osteochondral lesions corresponding anatomically with bone bruises in the acute phase 14), 15). Coen described normal joint appearance but “dimpling” of the cartilage over geographic femoral bruises when probed 16). Several authors describe articular lesions later at the time of anterior cruciate ligament  reconstruction 17), 18). Speer found a small incidence of fissuring (6%) overlying lateral femoral condyle and posterolateral tibial plateau contusions 19). Although Spindler found 46% of patients had articular lesions, many did not correlate with bone bruise. The only significant relationship was in the lateral femoral condyle where 40% of bone bruises had an overlying lesion 20). In contrast, Johnson consistently found evidence of articular cartilage injury over femoral condyle bone bruises, varying from subtle indentation when probed, to severe fibrillation, fissuring or overt chondral fracture 21).

Some interesting histological information has arisen from biopsy at varying time periods 22). In acute lesions, Rangger found microfractures of the trabecular bone, oedema and bleeding in the fatty marrow 23). In Johnson’s series, all patients had articular cartilage and subchondral bone changes at ACL reconstruction. Chondrocytes in the superficial zone of the articular cartilage showed different stages of degeneration, and loss of matrix proteogylcan and variable osteocyte necrosis in the underlying subchondral bone was noted 24). Fang supported the evidence for proteoglycan loss and also found a 10-fold increase in matrix protein degradation products in the synovial fluid from injured compared with uninjured knees 25). This clinical data supports previous animal studies suggesting blunt trauma to articular cartilage produces profound changes in its histologic, biochemical and ultrastructural characteristics in the absence of surface disruption 26) and lends scientific evidence to the notion that bone bruising may be a precursor of posttraumatic arthritis.

Few studies to date address resolution of bone contusions or long-term sequelae. The reported time for the resolution of the bone bruising is variable, ranging from as early as three weeks to two years. Vellet demonstrated complete resolution of MRI bone bruises at 6-12 months but osteochondral sequelae in 67% of lateral femoral condyle lesions 27). Bretlau recently reported persistent bone bruising in 69% and 12% of patients rescanned at 4 and 12 months respectively 28). Miller, in contrast, suggested the majority of lesions resolved in 2-4 months but his study involved patients with isolated medial collateral ligament injury, the benign nature of which may have influenced the rate of recovery 29). The radiological outcome of bone bruise is that the bone bruise resolves within 2–4 months 30), 31), with a good clinical outcome, provided no other articular structures have been injured 32). A recent systematic review of the literature 33) identified 266 articles but only included 13 as quality studies. The percentage of complete healing of bone bruises on MR scanning ranged from 88 % after 11-16 months of follow-up in one study to 100 % after 5-12 months of follow-up in another. This variability may be attributed to several factors, such as the severity of injury, extent of bone bruising or other associated internal knee derangement. Further large prospective studies are required to validate those factors affecting the radiological evolution of bone bruise. The commonest finding was an overt cartilage defect (48%), but features of osteosclerosis, cartilage thinning and osteochondral defects were also seen. No articular defects occurred over associated reticular bruises in the posterolateral tibial plateau. Two year follow-up studies suggest that 10-15% of patients have persistent bone marrow edema at 2 years and up to one third have some evidence of subchrondral osteonecrosis or articular cartilage degeneration 34), 35).

Another study looked at vertebral spine bone bruise 36), suggested that bone bruises within a thoracic or lumbar vertebral body in adult patients do not cause significant vertebral wedging and so are not, in isolation, a risk factor for post-traumatic deformity.

In bone bruise, the mean interval from the onset of symptoms until complete clinical resolution ranges from 4 to 24 months, with an average of 6 months. All patients with bone bruise recover completely without intervention 37).

The natural history of bone bruise is not well known as well as whether they predispose to premature osteoarthritis.

Many studies have shown that bone bruising may have deleterious effect on the overlying articular cartilage, although this concept is not generally accepted. The pathophysiological mechanisms by which the cartilage can undergo this degenerative process may be multifactorial. The initial blunt trauma might exceed a suprephysiological threshold and lead to progressive chondral damage. Additionally, the bone lesion might heal into stiffer construction than the previous normal bone. The decrease compliance might then generates greater load in the articular cartilage, leading to a progressive cartilage degeneration.

It is very difficult to identify clinical signs and symptoms directly attributable to the underlying bone bruise, because there are usually associated soft tissue changes.

In a prospective study of 95 patients with inversion injuries of the ankle and no plain fracture on plain radiographs, Alanen et al found an incidence of bone bruises of 27 percent. Most of the bone bruises were located in the talus, typically in the medial part. The authors further found no statistical difference in the time to return to work, limitation to walking or physical activity and clinical outcome at 3 months in the two groups with and without bone bruise. This findings were in line with previous study by Zanetti et al.

In another study involving the knee joint and bone bruise, bone bruise did not have any effect on the function, symptoms and activity at 6 months, despite patients initially presenting with bone bruise at the time of MRI had a significant higher level of symptoms, functional deficit and decrease in activity.

How are Bruised Bones treated ?

A bone bruise treatment may consist of the following methods: ice therapy, elevation, medication and/or rest.

As a recently recognised entity, the natural history of bone bruising is unknown 38). If bone bruise represents trabecular microfracture, as the histological evidence to date suggests, one can reasonably expect bony healing of the subchrondral lesion. Certainly, there is a consensus that most bone bruises heal in the short term. It has been proposed however, that increased stiffness of the healed bone may decrease the potential for the joint to dissipate load by deformation and this may also increase shear-stress at the bone cartilage interface, precipitating cartilage degeneration 39). However, it is also likely that the initial trauma insults the cartilage microstructure in its own right and the relative influence of the underlying bone bruise on chondral degeneration is still open to question. Further understanding of articular cartilage microstructure in the acute phase is needed, as evidence for chondral injury to date is based on macroscopic appearances and histology at the time of anterior cruciate ligament (ACL) reconstruction.

The high prevalence of bone bruises with ACL rupture has raised questions about its prognostic implications for this injured population. Posttraumatic arthritis is an established complication of nonoperative treatment of ACL rupture 40). Some radiological degeneration is seen in up to 80% of patients as early as 3 years post injury 41). McDaniel and Dameron found 37% of patients had profound degeneration at 14 years 42). Whilst associated meniscal injury was often considered the determining factor, several authors have shown similar rates of long-term degeneration, regardless of initial meniscal damage 43). Two possible explanations exist. Chronic instability may provoke secondary injury to menisci seen to be intact at the time of ACL rupture 44). Alternatively, initial damage to the articular cartilage may be the predominant prognostic factor and, if so, bone bruising may be the missing link. Sherman’s observation that knees with concomitant medial collateral ligament injury degenerated significantly earlier than those with ACL/ meniscal tear patterns could be explained by a more traumatic impact to the lateral compartment with extensive bone contusions.