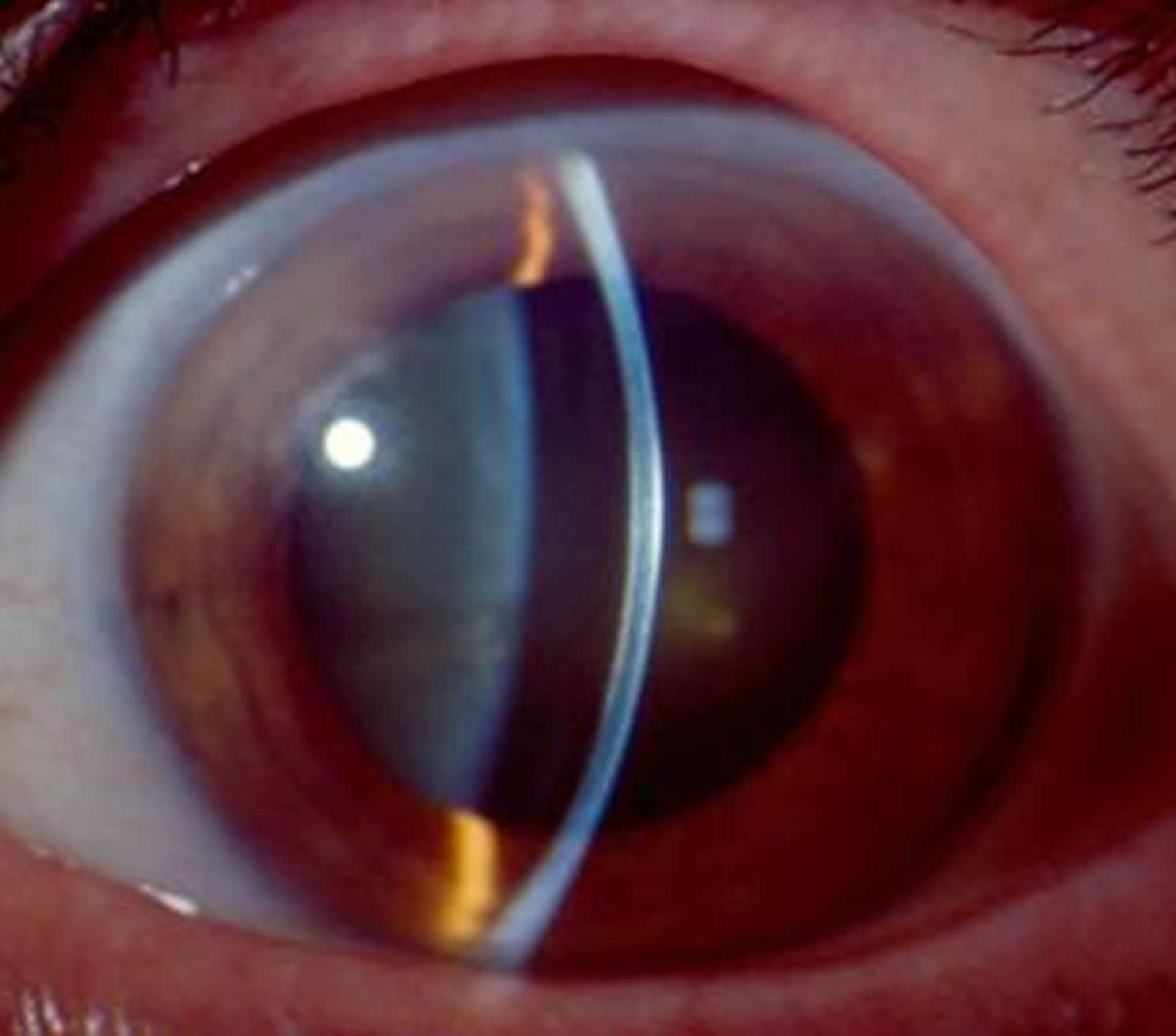 What is fuchs dystrophy

In patients with Fuchs’ corneal dystrophy, the endothelial cells slowly deteriorate as tiny bumps called guttae accumulate on the Descemet’s membrane. When the endothelial cells develop these guttae, the surrounding cells become damagedand cannot work properly. Since the remaining cells cannot keep up with pumping fluid, the cornea begins swelling (known as corneal edema). As a result, the cornea becomes thicker and cloudy, resulting in vision problems. In advanced cases, tiny blisters can form on the surface of your cornea which can be painful, so it is important to seek treatment prior to severe progression.

The term ‘cornea guttata’, as first used by Vogt to refer to these affected corneas of patients with Fuchs’ corneal dystrophy, has its origins in the ‘tropfige’ (German for drop-like) appearance of the endothelium. The singular term ‘gutta’ (plural, ‘guttae’) is the Latin noun for ‘drop’, with ‘guttata’ being the adjective describing the ‘guttate’ cornea. Vogt referred to individual excrescences as ‘dew drops’ in his report 1), suggesting that use of the noun would be appropriate. Nevertheless, it has been pointed out that adapting terminology in the field of ophthalmology is not a historically new development 2), as ‘cornea’ was initially an adjective (tunica cornea) used over 600 years ago to describe the hardness of this unique coat of the eye in similarity to a horn (cornu).

Some medications and self-care steps may help relieve your Fuchs’ dystrophy signs and symptoms. But when the disorder is advanced and you’ve lost vision, the only way to restore vision is with cornea transplant surgery.

A newer technique called endothelial keratoplasty (DSEK, DSAEK, or DMEK) has become the preferred option for people with Fuchs’ dystrophy. In this procedure, only the inner layers of the cornea are replaced, instead of all the layers. This leads to a faster recovery and fewer complications. Stitches are most often not needed.

The cornea is made up of five distinct layers:

The cornea serves two functions; it protects the rest of the eye from dust, germs and other harmful or irritating material, and it acts as the eye’s outermost lens, bending incoming light onto the inner lens, where the light is then directed to the retina (a membranous layer of light-sensing cells in the back of the eye). The retina converts light to images, which are then transmitted to the brain. The cornea must remain clear (transparent) to be able to focus incoming light. 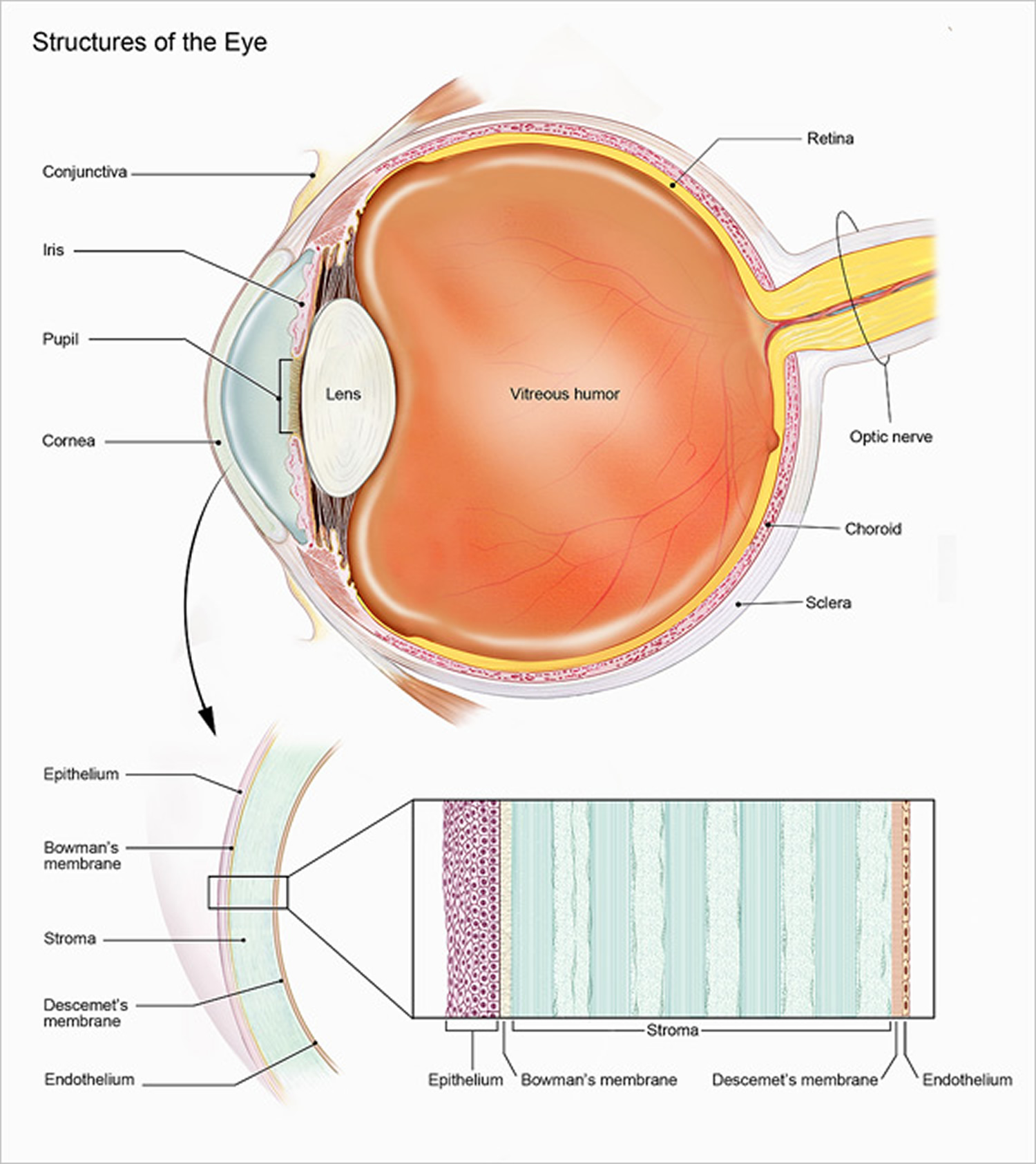 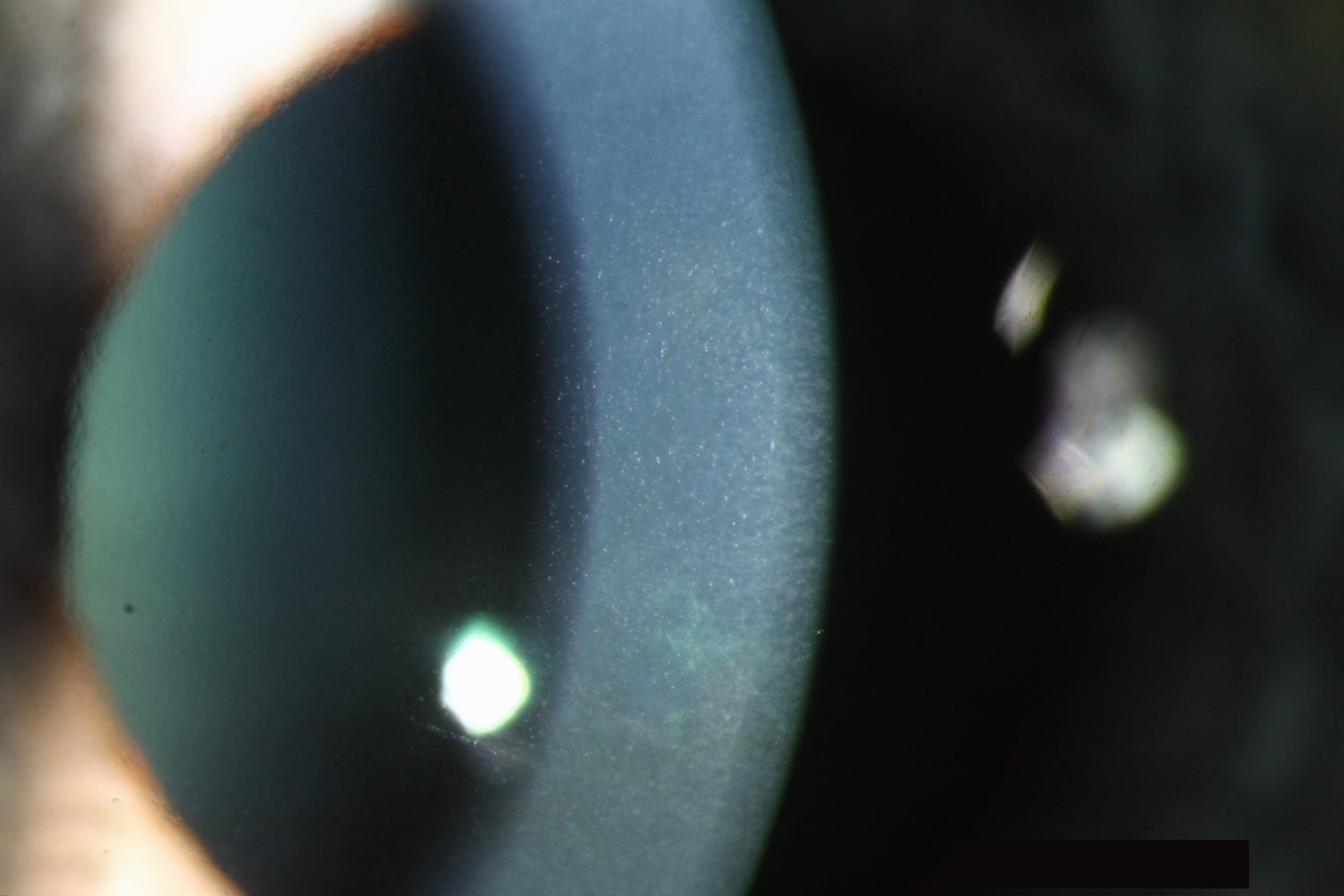 Vision problems might not appear until age 50 or later. The first symptom of Fuchs’ dystrophy is typically blurred vision in the morning that usually clears during the day. Over time, affected individuals lose the ability to see details (visual acuity). People with Fuchs endothelial dystrophy also become sensitive to bright lights.

The inheritance of Fuchs dystrophy is not straight forward. In some cases, Fuchs dystrophy appears to be inherited in an autosomal dominant pattern, which means one copy of the altered gene in each cell is sufficient to cause the disorder. In autosomal dominant inheritance, if either of your parents has the disease, you have a 50% chance of developing the condition. Or if you have an inherited form of Fuchs’ endothelial dystrophy there is a 50% chance you will pass it on to your children.

When Fuchs dystrophy is caused by a mutation in the COL8A2 gene (which is the early-onset form of Fuchs dystrophy), it is inherited in an autosomal dominant pattern. The genetic basis of the disease is complex — family members can be affected to varying degrees or not at all. In addition, an autosomal dominant inheritance pattern is seen in some situations in which the condition is caused by changes in an unknown gene. However, in many cases, the inheritance pattern is unknown. Spontaneous mutation in the gene for Fuchs’ dystrophy also can cause new Fuchs’ dystrophy in a person with no family history. Due to the complex nature of the inheritance of this condition, doctors strongly recommend you discuss your concerns with a genetics professional.

Currently there are studies underway to try and determine exactly which gene is responsible for the dystrophy, but as of yet scientists still do not know the exact gene. Recent reports suggest that missense mutations in ZEB1 gene may be responsible for at least some cases of late-onset Fuchs endothelial dystrophy. This mutation has also been found in cases of type 3 posterior polymorphous dystrophy suggesting that the two conditions may be allelic.

There are several forms of the disease according to the age of onset of the symptoms and the cause.

Late-onset Fuchs endothelial corneal dystrophies are common and include:

Factors that increase your risk of developing Fuchs’ dystrophy include:

Smoking and having diabetes might also put you at higher risk of the disease.

In the early stage (stage 1), you may notice few, if any, symptoms. Your vision may be hazy or blurry when you first wake up in the morning, but improve gradually throughout the day. As the disease progresses, blurred vision either can take longer to improve or doesn’t improve.

In the later stage (stage 2), your blurry or hazy vision will not get better as the day goes on. Here are other symptoms:

Other symptoms can include distorted vision, sensitivity to light, difficulty seeing at night and seeing halos around lights.

Besides testing your vision, your doctor might also have you undergo the following tests to determine whether you have Fuchs’ dystrophy:

Some nonsurgical treatments and self-care strategies might help relieve the symptoms of Fuchs’ dystrophy. If you have severe disease, your doctor might suggest surgery.

Medications and other therapies:

People who have surgery for advanced Fuchs’ dystrophy can have much better vision and remain symptom-free for years afterward. Surgical options include 3):

Surgical complications include infection, poor wound healing, transplant rejection, and suture related complications can be seen in transplant patients. With a full thickness transplant high refractive error and astigmatism can be seen can also be a problem. Long term use of topical steroids, necessary to prevent rejection, can induce cataract and glaucoma. Unique to Descemet’s stripping endothelial keratoplasty (DSEK) includes early onset detachment of the endothelial cells, which may require a repeat air bubble placement, or rarely replacement of endothelial transplant.

New ways of treating Fuchs’ dystrophy are being tested. Ask your doctor if you’re eligible for clinical trials.

Follow up is essential after any form of corneal transplantation. Most patients will need to be seen often in the first few weeks after the surgery to ensure surgical success and prevent infection. Routine follow up visits are essential for evaluation of transplant health, wound healing, and visual recovery including removal of sutures minimizing astigmatism. Both full thickness corneal transplant or penetrating keratoplasty (PKP) and partial thickness (DSEK) transplants have the potential for rejection, just as with any organ transplant. Rejection of the corneal transplant has been seen years after the initial surgery. Follow up is essential in order to prevent and treat rejection if seen.

In addition to following your doctor’s instructions for care, you can try these techniques to help reduce glare or soothe your eyes.