Is kombucha good for you 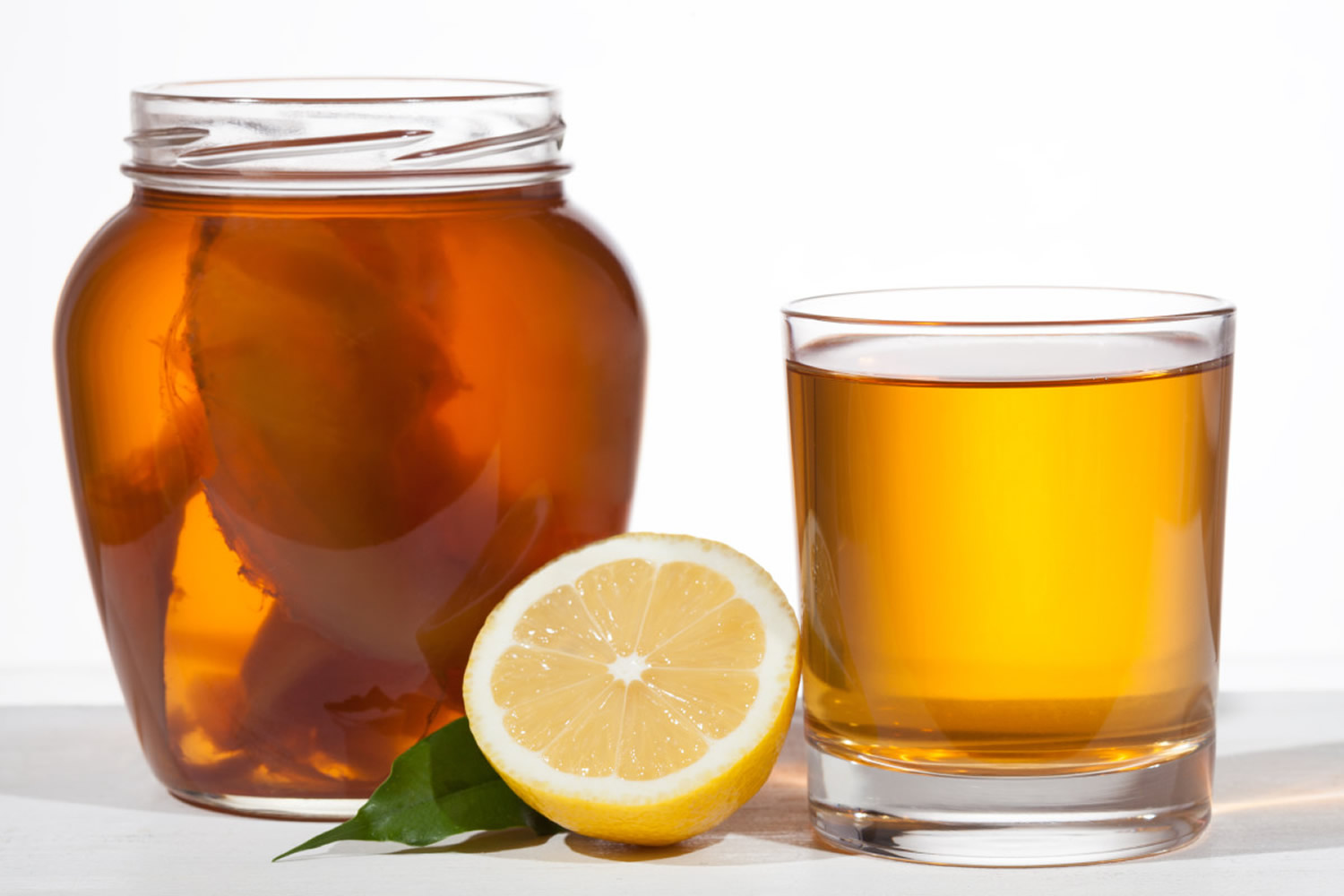 Kombucha tea is a fermented drink made with tea, sugar, bacteria and yeast 1). Although it’s sometimes referred to as kombucha mushroom tea, kombucha is not a mushroom — it’s a colony of bacteria and yeast. Kombucha tea is made by adding the colony (bacteria and yeasts) to sugar and tea, and allowing the mix to ferment 2). The resulting liquid contains vinegar, B vitamins and a number of other chemical compounds. A floating cellulosic pellicle layer and the sour liquid broth are the 2 portions of kombucha tea (Figure 1). It tastes like sparkling apple cider and can be produced in the home by fermentation using mail order or locally available tea fungus. Though green tea can be used for kombucha preparation, black tea and white sugar are considered the finest substrates.

Traditional substrate for the kombucha fermentation is black or green tea extract sweetened with 5% to 8% sucrose. Different tea leaf varieties, amounts of sugar, fermentation time, and composition of tea fungus may account for differences in composition and therefore also the biological activities of kombucha tea. 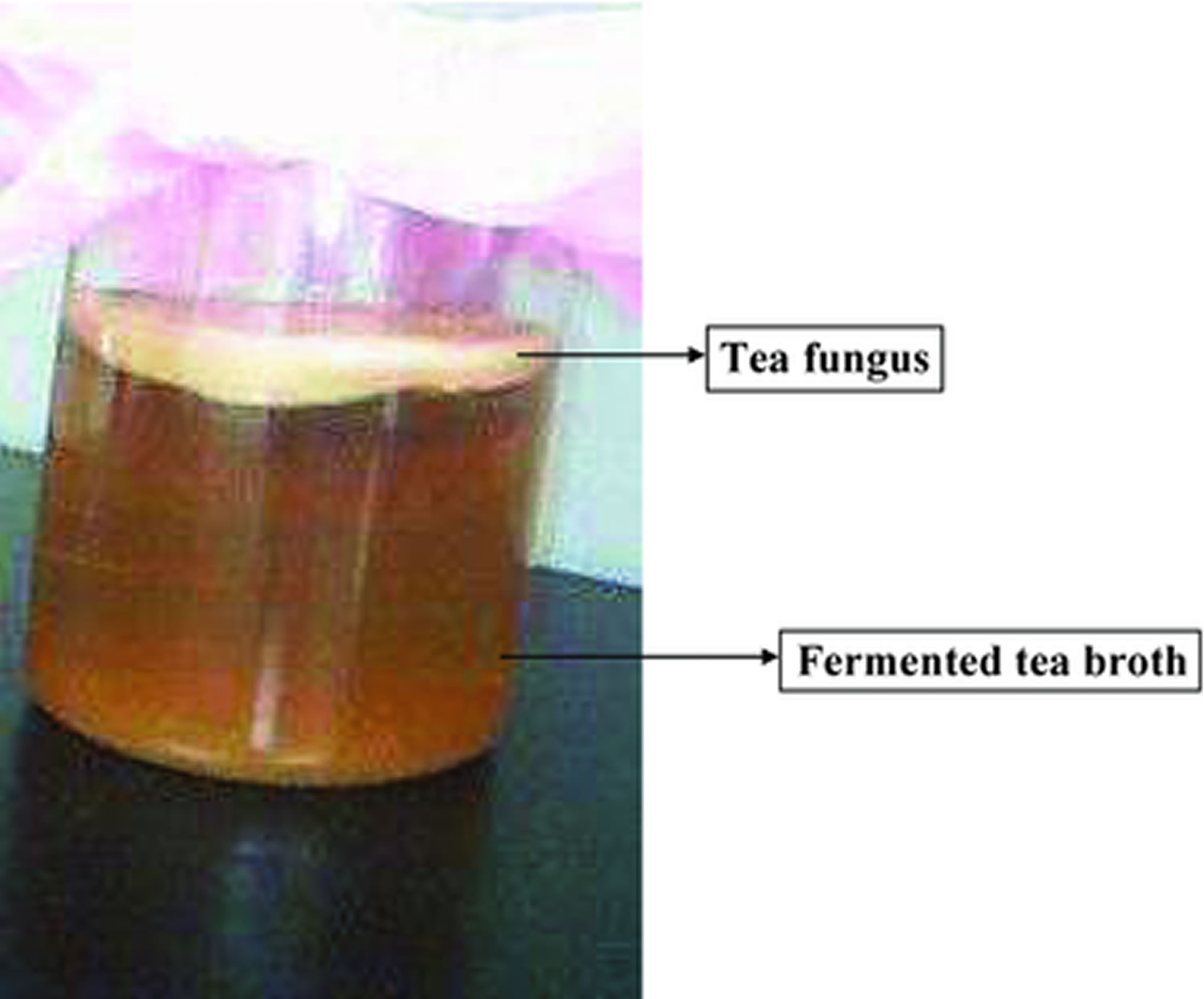 Proponents claim kombucha tea helps prevent and manage serious health conditions, from blood pressure to cancer. These claims are not backed by scientific evidence 3). Limited evidence suggests kombucha tea may offer benefits similar to probiotic supplements, including promoting a healthy immune system and preventing constipation. All the biological activities have been investigated using animal experimental models. At present, however, valid medical studies of kombucha tea’s role in human health are very limited — and there are risks to consider.

There have been reports of adverse effects, such as stomach upset, infections and allergic reactions in kombucha tea drinkers. Kombucha tea is often brewed in homes under nonsterile conditions, making contamination likely. When improperly manufactured ceramic pots have been used for brewing, lead poisoning has occurred — the acids in the tea can leach lead from the ceramic glaze.

In short, there isn’t enough evidence that kombucha tea delivers on its health claims. At the same time, several cases of harm have been reported. Therefore, the prudent approach is to avoid kombucha tea until more definitive information is available.

Tea fungus or kombucha is the common name given to a symbiotic growth of acetic acid bacteria and osmophilic yeast species in a zoogleal mat which has to be cultured in sugared tea. According to Jarrell and others 4), kombucha is a consortium of yeasts and bacteria. The formal botanical name Medusomyces gisevii was given to it by Lindau (Hesseltine 1965). Tea fungus is not a mushroom. That name is wrongly given due to the ability of bacteria to synthesize a floating cellulose network which appears like surface mold on the undisturbed, unshaken medium.

Similarly to milk-derived kefir, the exact microbial composition of kombucha cannot be given because it varies. It depends on the source of the inoculum for the tea fermentation. One of the clearer accounts of the microbes found in kombucha starter is from Hesseltine 5). He isolated an Acetobacter sp. (NRRL B-2357) and 2 yeasts (NRRL YB-4810, NRRL YB-4882) from a kombucha sample received from Switzerland and used these microorganisms to produce kombucha tea.

The most abundant prokaryotes in this culture belong to the bacterial genera Acetobacter and Gluconobacter. The basic bacterium is Acetobacter xylinum 6). It produces a cellulosic floating network on the surface of the fermenting liquid. The network is the secondary metabolite of kombucha fermentation but also one of the unique features of the culture 7). Sievers and others 8) reported that the microflora embedded in the cellulose layer was a mixed culture of A. xylinum and a Zygosaccharomyces sp. The predominant acetic acid bacteria found in the tea fungus are A. xylium, A. pasteurianus, A. aceti, and Gluconobacter oxydans 9). Gluconacetobacter sp. A4 (G. sp. A4), which has strong ability to produce D-saccharic acid-1,4-lactone (DSL), was the key functional bacterial species isolated from a preserved kombucha by Yang and others 10). Strains of a new species in the genus Acetobacter, namely Acetobacter. intermedius sp. nov., were isolated from kombucha beverage and characterized by Boesch and others 11). Dutta and Gachhui 12) isolated the novel nitrogen-fixing Acetobacter nitrogenifigens sp. nov., and the nitrogen-fixing, cellulose-producing Gluconacetobacter kombuchae sp. nov., from kombucha tea. An investigation by Marsh and others 13) indicated that the dominant bacteria in 5 kombucha samples (2 from Canada and one each from Ireland, the United States, and the United Kingdom) belong to Gluconacetobacter (over 85% in most samples) and Lactobacillus (up to 30%) species. Acetobacter was determined in very small number (lower than 2%).

Candida sp. is included in a great number of kombucha beverages. Kozaki and others 30) isolated Candida famata, Candida guilliermondii, and Candida obutsa. In kombucha samples from Mexico, Herrera and Calderon-Villagomez 31) detected C. famata. Teoh and others 32) identified Candida stellata. From a local kombucha in Saudi Arabia, Ramadani and Abulreesh 33) isolated and identified 4 yeasts: Candida guilliermondi, Candida colleculosa, Candida kefyr, and Candida krusei. C. krusei were identified in kombucha from a district of Ankara 34).

Yeasts and bacteria in kombucha are involved in such metabolic activities that utilize substrates by different and in complementary ways. Yeasts hydrolyze sucrose into glucose and fructose by invertase and produce ethanol via glycolysis, with a preference for fructose as a substrate. Acetic acid bacteria make use of glucose to produce gluconic acid and ethanol to produce acetic acid. The pH value of kombucha beverage decreases due to the production of organic acids during fermentation 36).

The results presented in Table 1 indicate the predominant components of traditional kombucha beverage. These data suggest the heterogeneity of investigations performed on kombucha. The main differences in the investigated components are related to the duration of fermentation and the content of black tea. The researchers from different parts of the world used the same initial content of sucrose (10%). Researchers used different amounts of kombucha tea broth for the initial inoculation: 20% 37) and 10% 38). The fermentation process was performed in small volume reactors (glass jar or beaker), up to 1 L. The measured values of components propose that applied parameters (fermentation temperature, fermentation time, and initial content of sucrose and black tea), as well as the composition of kombucha culture have impact on the metabolic activity of kombucha, and therefore, on the end products of the metabolism.

Table 1. Predominant components in kombucha tea at the end of the fermentation on sugared black tea infusion

Acetic acid bacteria from kombucha produce acetic acid, as one of the main metabolites, when sucrose is used as a carbon source. Many authors determined the content of acetic acid in the beverage obtained after cultivation of kombucha on traditional substrate. Chen and Liu 55) followed extended kombucha fermentation and determined the highest rate of 11 g/L after 30 d. The trend of acetic acid content was slow, increased with time, and then gradually decreased to 8 g/L, at the end of fermentation (60 d; Table 1). The same pattern was established by Jayabalan and others56) who monitored the fermentation until the 18th day on green tea (12 g/L) sweetened with 10% sucrose. The highest content was 9.5 g/L on the 15th day. Molasses was used in place of sucrose by Malbaša and others 57). Kombucha fermentation on molasses produced only 50% of acetic acid in comparison with sucrose at the same stage of fermentation. This might be due to the poor growth of acetic acid bacteria on molasses.

Glucuronic and gluconic acids are also major organic acids that are produced as a result of the kombucha fermentation process on traditional substrate. Lončar and others 58) determined the glucuronic acid after kombucha fermentation on sweetened black tea. The highest amount was measured after 7, and 21 d (0.0034 g/L; Table 1). Jayabalan and others 59) established the maximum value of 2.33 g/L D-glucuronic acid after 12 d of fermentation. Chen and Liu 60) determined that gluconic acid was not produced until the 6th day of fermentation. The ending concentration amounted the about 39 g/L after 60 d (Table 1).

Yavari and others 61) cultivated kombucha on sour cherry juice sweetened with 0.6%, 0.8%, and 1% sucrose. Glucuronic acid was produced in very large amounts of 132.5 g/L which was determined on the 14th day of fermentation, in substrate with 0.8% sucrose. The fermentation process was conducted at 37 °C. Yavari and others 62) used response surface methodology to predict the value of glucuronic acid content in kombucha beverage obtained after fermentation on grape juice sweetened with 0.7% sucrose, and the highest value was achieved after 14 d of fermentation at 37 °C. Franco and others 63) established the presence of glucuronic (0.07 to 9.63 g/L) and gluconic (0.04 to 1.16 g/L) acids in a product obtained after kombucha cultivation on black tea sweetened with glucose (0.062% to 1.51%). Yang and others 64) also determined the presence of gluconic acid and 2-keto gluconic acid, after cultivation of Gluconacetobacter sp. A4 isolated from kombucha and a strain of lactic acid bacteria, on 5 g/L black tea sweetened with 10% glucose.

L-lactic acid is not a characteristic compound for traditional kombucha beverage, but it is detected and determined. Jayabalan and others 65) examined kombucha prepared with green tea to have a higher concentration of lactic acid than kombucha prepared from black tea and tea waste material. The maximum value of 0.54 g/L was established on the 3rd day. Malbaša and others 66) measured the content of L-lactic acid after kombucha fermentation on molasses and established that it is a metabolic product present in large amounts. The presence of L-lactic acid after kombucha fermentation on molasses can be correlated to the L-lactic content of molasses itself which can be produced as a result of degradation of invert sugar in molasses. Molasses also contains amino nitrogen and biotin, which affect the intensity of kombucha fermentation.

The composition of kombucha beverage indicates the presence of numerous compounds and it depends on cultivation substrate, time and temperature of fermentation process, as well as the microorganisms present in the culture, but also on the applied method of analysis.

How to make kombucha

The amounts of tea, sugar, and tea fungus differ in different places. The standard procedure is as follows:

Although kombucha tea has been reported to have curative effects, there is some evidence of toxicity associated with it. Some individuals have reported dizziness and nausea after consuming certain kombucha products. Two cases of unexplained severe illness have also been reported following kombucha consumption 70). Kombucha tea is contraindicated in pregnant and lactating women. It has been found to cause lead poisoning and gastrointestinal toxicity in 2 individuals. The presence of anthrax Bacillus in kombucha tea fermented in unhygienic condition was reported by Sadjadi 71). Further, Gamundi and Valdivia 72) stated the risks of consuming kombucha beverage by HIV-positive patients. Side effects like allergic reactions, jaundice, nausea, vomiting, and head and neck pain related to consumption of kombucha were reported in 4 patients 73). A married couple who had been drinking kombucha tea for 6 months, which was brewed in a ceramic pot, was reported to have symptomatic lead poisoning requiring chelation therapy 74). It was postulated that acids in the drink eluted lead from the glaze pigment used in the ceramic pot. Sabouraud and others 75) reported cases of lead poisoning in adults identified as anemia due to the lead-glazed earthenware jug which was used to store kombucha. A case of acute renal failure with lactic acidosis and hyperthermia within 15 h of kombucha tea ingestion by a 22-y-old HIV-positive male with a blood lactate level of 12.9 mmol/L and serum creatinine of 2.1 mg/dL was recorded 76). However, all of these cases were very isolated and involved only a small number of individuals. Moreover, there is no substantial evidence to confirm the toxicity of any kombucha tea or the occurrence of illness by earlier studies 77).