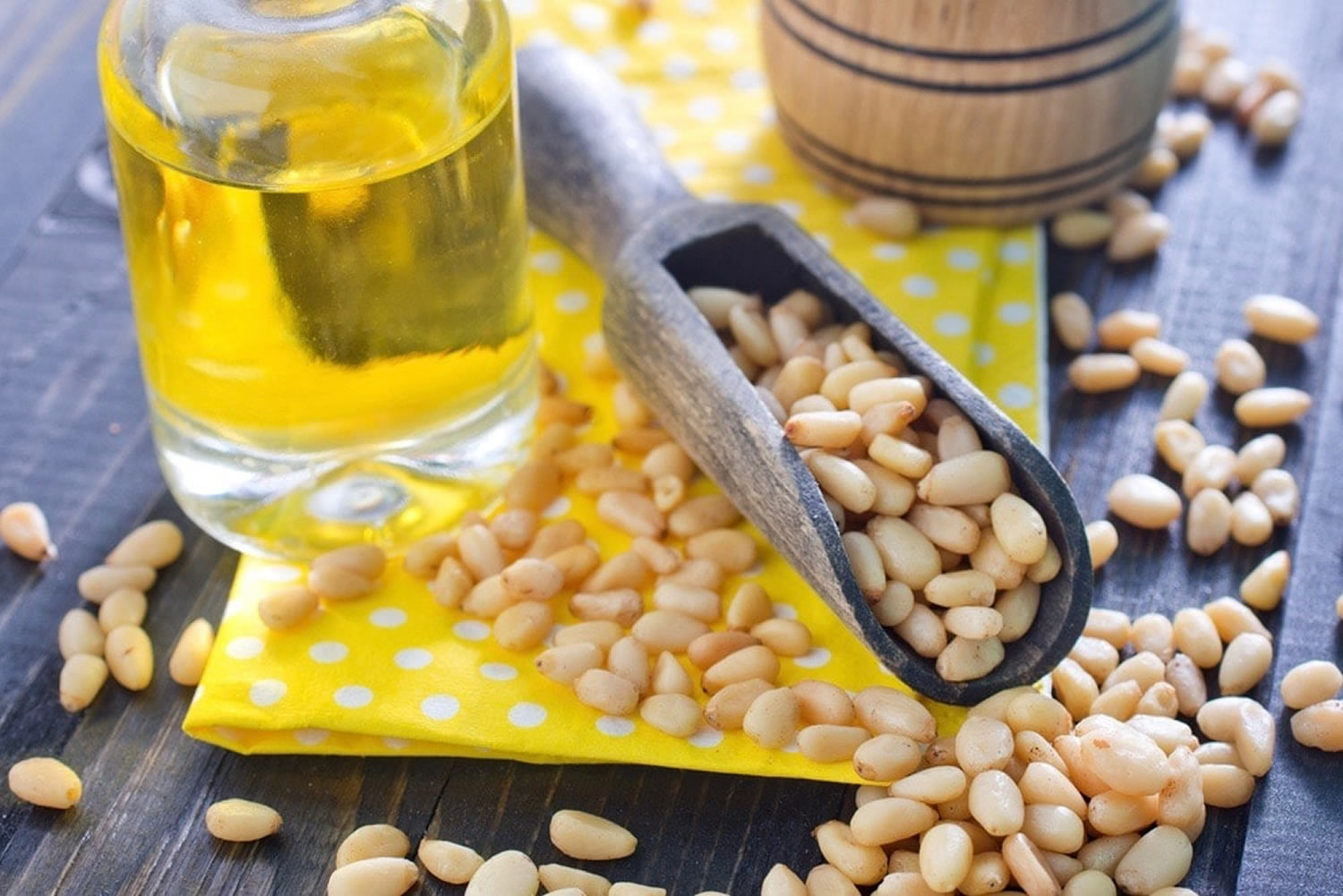 What is pine nut oil

Pine nut oil, also called pine seed oil or cedar nut oil, is a vegetable oil, extracted from the edible seeds of several species of pine. While the pine oil produced from the seeds of more common European [Pinus pinea, Pinus pinaster, Pinus cembra, Pinus mughus, Pinus nigra] and American pine [Pinus monophylla, Pinus cembroides] varieties is mostly used for culinary purposes 1), Siberian pines [Pinus sibirica, Pinus griffithii, Pinus sylvestris] (growing in Russia, Mongolia and Kazakhstan), as well as Korean pines [Pinus koraiensis] (growing mostly in China and North Korea) yield the seeds with the highest content of pinolenic acid, as well as antioxidants associated with medicinal uses 2). Approximately 29 species of Pinus produce seeds, which have been used as a food item, at least by indigenous tribal cultures. Most of the edible nut bearing pines are haploxylon (soft) pines although several species are of the diploxylon (hard) pine group (Tables 1 and 2). The greatest number of pine species which bear edible nuts are found in North America, the largest group being the piñon pines of northern Mexico and south-western United States. These are a complex and highly variable group of small to medium sized trees that occur in localities with a semi-arid climate. About 13 species of piñon pines are known (Table 2). In Asia and the Near East, Pinus gerardiana, P. koraiensis , P. pumila and P. sibirica are important pine nut producing species. The nuts of Pinus sibirica and Pinus koraiensis are pressed commercially for the production of cooking oil. Pine nuts are rich in oil (31–68% by weight) and contain several unusual polymethylene-interrupted unsaturated fatty acids with a cis-5 ethylenic bond. These are the cis-5, cis-9 18:2; cis-5,cis-9,cis-12 18:3; cis-5,cis-11 20:2, and cis-5,cis-11,cis-14 20:3 acids, with a trace of cis-5,cis-9,cis-12,cis-15 18:4 acid. Their percentage relative to total fatty acids varies from a low of 3.1% (Pinus pinea) to a high of 30.3% (Pinus sylvestris), depending on the species. The major cis-5 double bond-containing acid is generally the cis-5,cis-9,cis-12 18:3 acid (pinolenic acid). In all species, linoleic acid represents approximately one-half the total fatty acids, whereas the content of oleic acid varies in the range 14–36% inversely to the sum of fatty acids containing a cis-5 ethylenic bond. Pinus koraiensis, a native plant of eastern Asia and commonly called the Korean pine nut, is one of the main types of commercial pine nuts. Pine nuts contain fatty acids with an unusual structure, e.g., Δ5-unsaturated polymethylene-interrupted fatty acids (delta5-UPIFAs) 3). These fatty acids are the characteristic components of lipids obtained from conifer seeds and leaves 4). Pinolenic acid (18:3, Δ5,9,12) is a major delta5-UPIFA present in pine nuts. Pinolenic acid (18:3, Δ5, 9, 12), which is an unusual omega-6 polyunsaturated fatty acids (PUFA) characterized by polymethylene-interrupted double bonds. The Korean pine (Pinus koraiensis) nuts have been used in Asia for various dishes. Lipid content of the Korean pine nut comprises 62% of the total weight of the nut 5). The oil extracted from Korean pine nuts, also known as Korean pine nut oil, consists of 66% polyunsaturated fatty acids (PUFAs; 45% linoleic acid [C18:2, Δ9,12], 27% oleic acid [18:1, Δ9] and 15% pinolenic acid [C18:3]), 26% monounsaturated fatty acids (MUFAs; oleic acid [C18:1]), 5% palmitic acid (16:0), 2% stearic acid (18:0), 1% eicosenoic acid (20:1, Δ11) and 3% other Δ5-unsaturated polymethylene-interrupted fatty acids (delta5-UPIFAs) 6), 7).

Table 2. The pines of Mexico and the United States

The health benefits of pine nut oil have been investigated in several studies. Asset et al. 11), 12) reported that pine nut oil consumption lowered the total cholesterol and triglyceride levels when compared with the consumption of other lipids such as sunflower oil, coconut oil, or lard in mice. In a study by Sugano et al. 13), consumption of pine nut oil (22% energy) alleviated high blood pressure in spontaneously hypertensive rats after five weeks of feeding. Hughes et al. 14) showed that providing a pine nut oil capsule prior to an ad libitum buffet lunch resulted in reduced food intake in overweight female subjects. Pasman et al. 15) observed that cholecystokinin (CCK-8) and glucagon-like peptide-I secretion were higher in subjects who received a pine nut oil capsule than in those who received a placebo, thereby supporting the findings by Hughes et al. 16). Pine nut oil administration to overweight postmenopausal women has reported to produce a significant increase of cholecystokinin (CCK-8) and glucagon like peptide-1 (GLP-1) 17). Cholecystokinin (CCK-8) that is released from duodenal enteroendocrine cells into the blood stream in response to fatty acids or protein 18). Cholecystokinin (CCK-8) suppresses appetite, and higher concentrations of CCK-8 produce larger appetite-suppressing events 19). Other hormones that are important are glucagon like peptide-1 (GLP-1), peptide YY (PYY) and ghrelin 20). GLP-1 and PYY are both produced in the ileum, induced by passing fatty acids and carbohydrates. Higher concentrations decrease appetite 21). However, unlike the appetite suppressing results of previous study by Hughes et al. 22), a more recent study involving 39 healthy women aged 18-45 y with a BMI of 23-30 kg/m2 who took 3 g or 6 gram “PinnoThin” Korean pine nuts oil compared to placebo milk fat 23) no appetite suppressing effect of “PinnoThin” Korean pine nuts oil was found.

Pinolenic acid, which is the positional isomer of γ-linolenic acid [Gamma-linolenic acid or GLA], can also be taken up and elongated to form eicosatrienoic acid (20:3, Δ7,11,14) 26). Chuang et al. 27) reported that pinolenic acid, taken up by cells, modified the fatty acid composition of cellular phospholipids, resulting in a decreased production of proinflammatory eicosanoids in the murine macrophage cell line. In contrast to the in test tube results, the production of proinflammatory lipid mediators was elevated in animals that were fed with pine nut oil 28). In a study that examined the effects of a five-week pine nut oil diet (22% energy) on immune parameters 29), the relative proportion of splenic CD4+ T lymphocytes, the splenic production of immunoglobulin G and E, and the leukotriene B4 released from peritoneal exudate cells were higher in rats that were fed with pine nut oil compared with those fed with safflower oil (a source of linoleic acid; n-6, 18:2, Δ9,12) or evening primrose oil (a source of γ-linolenic acid; n-6, 18:3, Δ6,9,12). Therefore, pinolenic acid has the potential to modulate the immune response via a mechanism that may be different from that of other omega-6 PUFAs in vivo. However, information regarding the effect of pine nut oil on immune function is limited.

Obesity has been associated with impaired immune function. It was reported that obese patients had an increased risk of infection 30) and poor antibody response to vaccination 31). It was suggested that altered levels of circulating hormones and nutrients, such as glucose and lipids, might contribute to dysregulation of the immune cells 32). Several studies showed that adequate weight reduction could correct the altered immune response 33), which suggests that immune response could be improved by weight reduction in obese subjects.

Pine nut oil has been reported to have favorable effects on lipid metabolism in rats 34), blood pressurein rats 35), appetite control 36), and eicosanoid production 37). A study by Ferramosca et al. 38) showed that pine nut oil consumption led to less weight gain in mice that were fed with a 29% energy fat diet containing pine nut oil (17% energy). In another study by Ferramosca et al. 39), it was shown that the combination of conjugated linoleic acid and pine-nut-oil prevented a conjugated linoleic acid-induced fatty liver and improved insulin sensitivity in mice.

Earlier studies in rats showed that maritime pine seed oil 45) lowers triglycerides, VLDL-triglycerides and VLDL-cholesterol compared to a diet enriched in oleic acid 46). The latter findings indicated that pine seed oil may be useful in lipid-lowering diets. In another animal study to assess the lipid-lowering and antiatherogenic properties of pine seed oil in apolipoprotein E-deficient mice 47), it was found pine oil feeding had no significant preventive effect on atherosclerosis lesion formation in the apo E-deficient mice compared to lard or sunflower. These data indicate that pine oil does not protect against atherosclerosis in the absence of apolipoprotein E. In contrast, triglycerides and VLDL + IDL-triglycerides levels were higher in mice fed pine oil than sunflower oil or lard.

Both, the needle and cone essential oils of Pinus roxburghii, were screened for anti-microbial activity. Neither of the oils exhibited anti-bacterial activity (MIC ≥625 μg/mL against Bacillus cereus, Staphylococcus aureus, Pseudomonas aeruginosa, and Escherichia coli). The major components (E)-caryophyllene and α-humulene had previously shown moderate anti-bacterial activity against Bacillus cereus and Staphylococcus aureus, while terpinen-4-ol was inactive 55). Both the needle and cone oils, on the other hand, were notably anti-fungal against Aspergillus niger (MIC=156 and 39 μg/mL, respectively), and α-humulene was previously shown to be anti-fungal against Aspergillus niger 56). Both the needle and bark oils also showed in-vitro cytotoxic activity against MCF-7 cells at 100 μg/mL concentrations (70.9 ± 1.4% and 100% kill, respectively). The cytotoxicities of these essential oils are likely due to the high concentrations of terpinen-4-ol, (E)-caryophyllene, and α-humulene, which have been shown to be cytotoxic on MCF-7 cells 57). Pinus roxburghii cone oil was toxic to Artemia salina with LC50=11.8 μg/mL. The biological activities of P. roxburghii oil in this study are consistent with previous literature reports 58) and are consistent with the traditional medicinal uses of this plant.

The essential oil of Pinus eldarica showed considerable cytotoxicity on the HeLa and MCF-7 tumor cells with IC50 (IC50 is a measure of the effectiveness of a substance in inhibiting a specific biological or biochemical function. It is commonly used as a measure of a drug’s potency) of 0.038 and 0.032 µg/mL, respectively 59). It has been shown that terpens play an important role in cytotoxicity of essential oils 60). Cytotoxic activity of pine needle and pine bark oils of Pinus roxburghii against MCF-7 tumor cells at 100 μg/mL concentrations indicated 70.9 ± 1.4% and 100% cell toxicity 61). A study by Sarvmeili et al 62) showed that leaf essential oil of P. eldarica contained β-caryophyllene (14.81%), germacrene D (12.95%), α-terpinenyl acetate (8.15%), α–pinene (5.68%), and α-humulene (5.89%) that could be responsible for its cytotoxic activity. Several studies have shown that β-caryophyllene oxide, germacrene D, and α-humulene possess significant cytotoxic activity against various tumor cell lines 63).

According to these data, essential oil and extracts of Pinus. eldarica had more cytotoxic effect on HeLa than MCF-7 tumor cells. These differences in susceptibility of different cells have been shown by other studies 64). It can be calculated from the findings of this study 65) that essential oil of Pinus eldarica could be considered as a potential cytotoxic candidate for further studies to achieve antitumor agents.

The findings of this study 66) demonstrate the larvicidal potentials of the essential oils of Pinus sylvestris against the common mosquito vectors. The results as determined by gas chromatography–mass spectrometry showed that oil of Pinus sylvestris has 3-Cyclohexene-1-methanol, .alpha., .alpha.4-trimethyl (27.1%) as its dominant constituent. These locally sourced essential oil can therefore be incorporated in the mosquito control measures, mostly in local areas where access to health facilities is extremely difficult.

It can be concluded that to date there is no single well designed human clinical trials that can unequivocally support the purported benefits and uses of pine nut oil as appetite supressant or as an effective weight control product. Some of the animal experimental results reviewed above show potentially promising effects for pine oil. However, more data are needed in human studies.