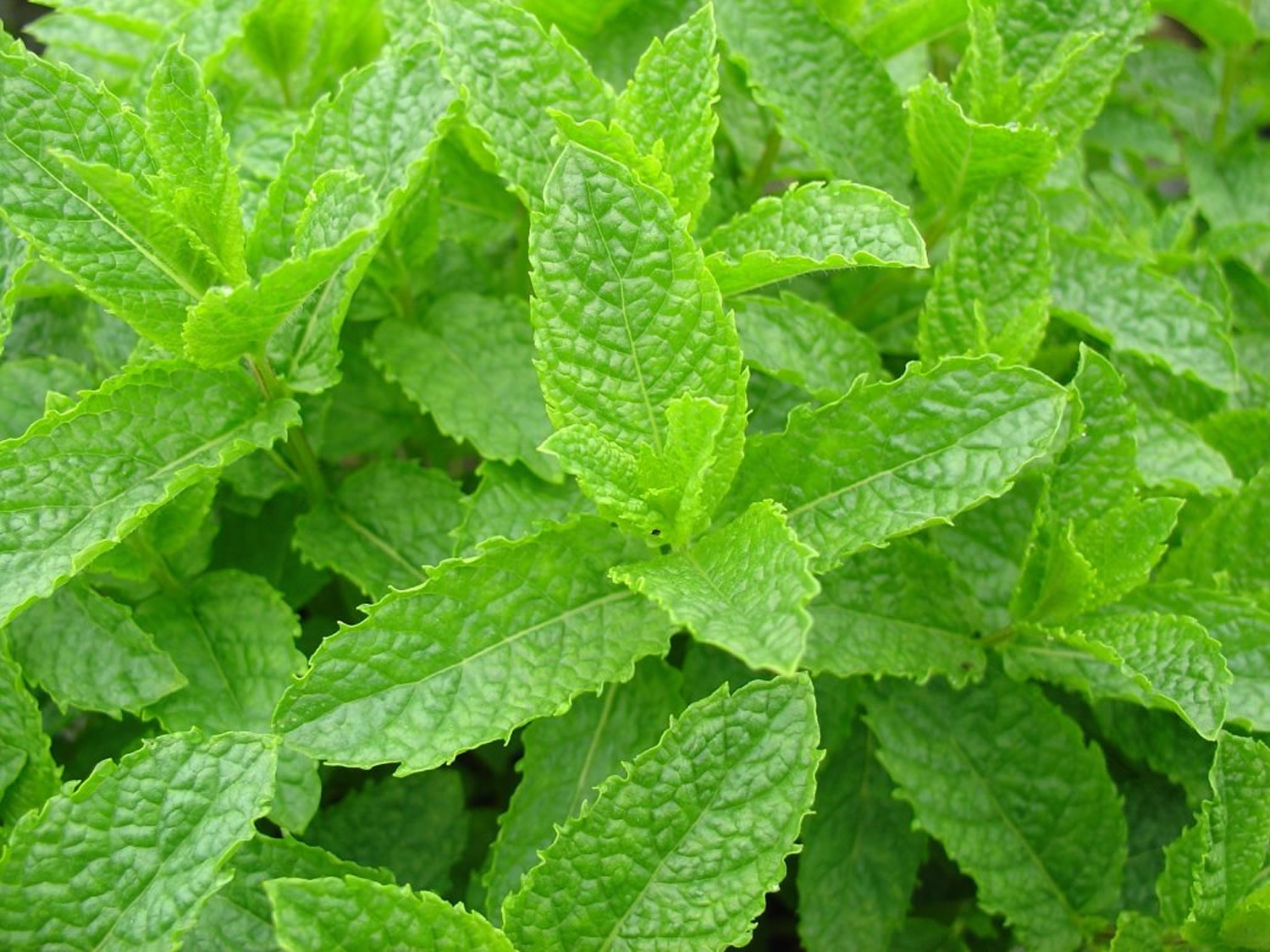 Spearmint (Mentha spicata) family Lamiaceae is a herbaceous rhizomatous perennial plant growing 30–100 cm tall, with variably hairless to hairy stems and foliage, and a wide-spreading fleshy underground rhizome 1). Spearmint is also known as garden mint, common mint, lamb mint and mackerel mint 2). Spearmint leaves are 5–9 cm long and 1.5–3 cm broad, with a serrated margin. The stem is square-shaped, a trademark of the mint family of herbs. Spearmint produces flowers in slender spikes, each flower pink or white and 2.5–3 mm long and broad. Spearmint is a species of mint native to much of Europe and Asia (Middle East, Himalayas, China etc.) and naturalized in parts of northern and western Africa, North America, and South America, as well as various oceanic islands.

Spearmint leaves are popularly used as a tea flavoring agent. Spearmint is also often used in Indian and Italian cuisine and usually added fresh or dried to fish and shellfish plates before or after cooking.

The fresh and dried spearmint leaves and their essential oils are widely used in the food, cosmetic, confectionary, chewing gum, toothpaste, and pharmaceutical industries 3). Spearmint are extensively used as flavoring in confectionery and food industries and fragrance industries, pharmaceutical preparations and cosmetic products and also in hygiene products 4).  5). 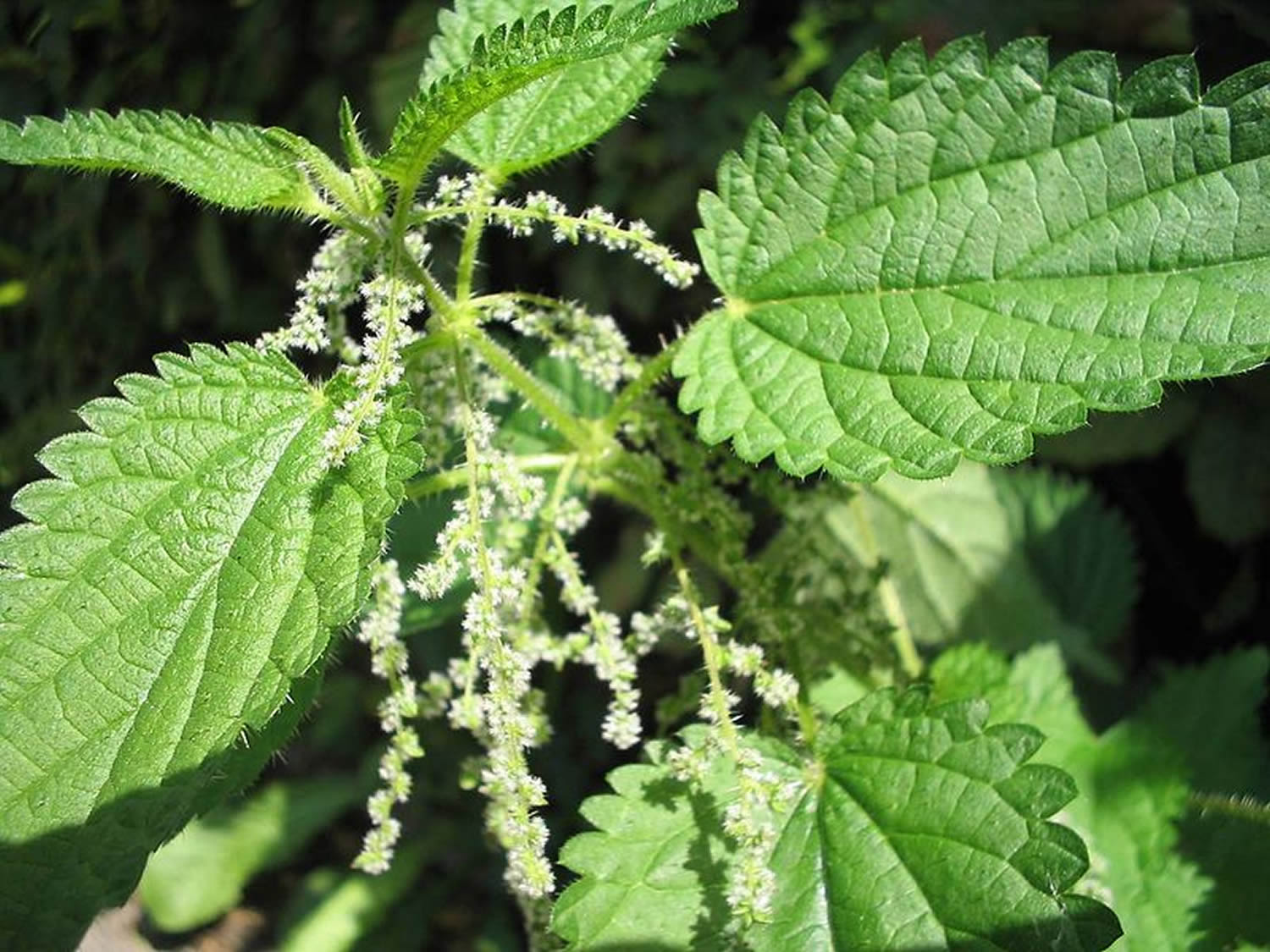 Spearmint oil is the essential oil extracted from the flowering tops of Mentha spicata. Spearmint oil is used for its aromatic properties and for treatment of illnesses of the digestive and respiratory systems. Spearmint possesses several biological activities and is used in folkloric medicine for relieving flatulence, antispasmodic, diuretic, antibacterial, antifungal, and antioxidant agent, and for treatment of colds and flu, respiratory tract problems, gastralgia, hemorrhoids, and stomachache 18).

Some studies have been shown that spearmint oil has anti-fungal, anti-microbial, anti-inflammatory, anti-tumor and antioxidant activity 19).

The major constituents of spearmint leaves essential oil are carvone (29–74%), limonene (4–24%), dihydrocarvone, 1,8-cineol, β-bourbonene, β-caryophyllene, myrcene and α-pinene and aromatherapists. Spearmint is mainly recommended for its antispasmodic effects, which are related to its carvone content, the most important constituent of spearmint. Spearmint oil is also used for its local anesthetic, astringent, carminative, decongestant, digestive, diuretic and expectorant effects 20), 21). Furthermore, various beneficial medicinal effects of spearmint have been found, such as preventing chemotherapy-induced nausea and vomiting 22), treatment of respiratory and digestive system disorders, hypertension, anxiety and even for relieving menstrual pain 23).

Four antioxidant assays have been used to evaluate the possible antioxidant properties of the spearmint essential oil, including (1,1-diphenyl-2-picrylhydrazyl scavenging activity) DPPH radical scavenging activity, superoxide anion scavenging, reducing power, and antioxidant assay using β-carotene linoleate system. The results obtained confirm previous reports about the importance of essential oils as natural antioxidants and their possible role in the protection of human health. Organic extracts of spearmint species have been found to have antioxidant and antiperoxidant properties due to the presence of eugenol, caffeic acid, rosmarinic acid, and α-tocopherol 24). An aqueous extract of peppermint provides protection against radiation-induced chromosomal damage in the bone marrow of mice by decreasing serum acid phosphatase and increasing serum alkaline phosphatase 25).

Recently, Naidu et al. 26) reported that the total phenolic component of a crude methanolic extract of spearmint was found to be 27.26 ± 0.62 mg/g gallic acid equivalent. The (1,1-diphenyl-2-picrylhydrazyl scavenging activity) DPPH radical scavenging activity was found to increase with increasing concentrations and was found to be 54.84% ± 0.57% with an IC50 value of 25.2 µg/mL. In the same year, Martins et al. 27) studied the chemical composition and antioxidant activities of spearmint essential oil harvested from Portugal and reported the identification of 30 components that constitute 87.7% of the total composition. Oxygenated monoterpenes (46.3%), monoterpene hydrocarbons (25.5%), and sesquiterpene hydrocarbons (14.1%) were found to be the major constituent groups, with the monoterpere carvone (41.1%) as the main constituent. This essential oil showed antioxidant activity both by (1,1-diphenyl-2-picrylhydrazyl scavenging activity) DPPH radical scavenging method (31.45%) and by system β-carotene/acid linoleic method (14.89%).

The antibacterial activity of spearmint essential oil tested against 30 Vibrio spp. microorganisms was examined both qualitatively (inhibition zone diameter) and quantitatively (MIC and MBC values). Moreover, its potency to inhibit and eradicate the biofilm formed on polystyrene surface (XTT assay) was tested in the a study 28). The results showed that the studied spearmint essential oil had substantial anti-Vibrio spp. activity.

The results of another study 29) indicated that spearmint essential oil has remarkable antibacterial activity against common food-borne bacteria associated with outbreaks (S. aureus, B. subtilis, B. cereus, L. monocytogenes, S. typhimurium, and E. coli O157:H7). The antibacterial activity of the essential oil could be attributed to the presence of various active compounds. The main components were carvone (78.76%), limonene (11.50%), β-bourbonene (11.23%), cis-dihydrocarveol (1.43%), trans-caryophyllene (1.04%), menthone (1.01%), menthol (1%), and terpinen-4-ol (0.99%).

Uribe et al. 30) reported that monoterpenoids such as (R-) and (S-) carvones exert an antimicrobial effect by interacting with the microbial membrane due to their inherent lipophilicity, while, the combination of R- and S-carvone suggested that carvones have a high affinity for the bacterial cell membrane and may influence structural or functional properties of the membrane 31). In fact, using the Transmission Electron Microscope, Mun and colleagues 32) revealed cytoplasmic disruption and separation of the cytoplasmic contents of methicillin-resistant S. aureus strains following exposure to R-carvone. Additionally, (4R)-(−)-carvone was also active against Campylobacter jejuni, Enterococcus faecium, Escherichia coli, and Aspergillus niger 33), while (4S)-(+)-carvone was effective against E. coli O157:H7, Salmonella typhimurium Photobacterium leiognathi, and Listeria monocytogenes 34). In a previous work carried out by Aggarwal et al. 35), the results showed that the main components found in spearmint oil were (4S)-(−)-limonene, (4R)-(−)-carvone), (R)-(+)-limonene, and (4S)-(+)-carvone) for A. sowa Roxb essential oil. They also found that both optical isomers of carvone were active against a wide spectrum of human pathogenic fungi and bacteria. Additionally, the antimicrobial properties of these monoterpenes were similar to those in spearmint and Indian dill essential oils.

Peppermint (Mentha x piperita, also known as Mentha balsamea Willd) is a hybrid mint, a cross between watermint and spearmint 36). Indigenous to Europe and the Middle East, the plant is now widespread in cultivation in many regions of the world. It is occasionally found in the wild with its parent species.

Peppermint oil has a high concentration of natural pesticides, mainly pulegone (found mainly in Mentha arvsis var. piperascens cornmint, field mint, Japanese mint, and to a lesser extent in Mentha piperita subsp. nothosubsp. piperita) and menthone. It is known to repel some pest insects, including mosquitos, and has uses in organic gardening.

Medicinal uses of peppermint supported by clinical data for symptomatic treatment of irritable bowel syndrome 37) and digestive disorders such as flatulence and gastritis 38). Externally for treatment of myalgia and headache 39). 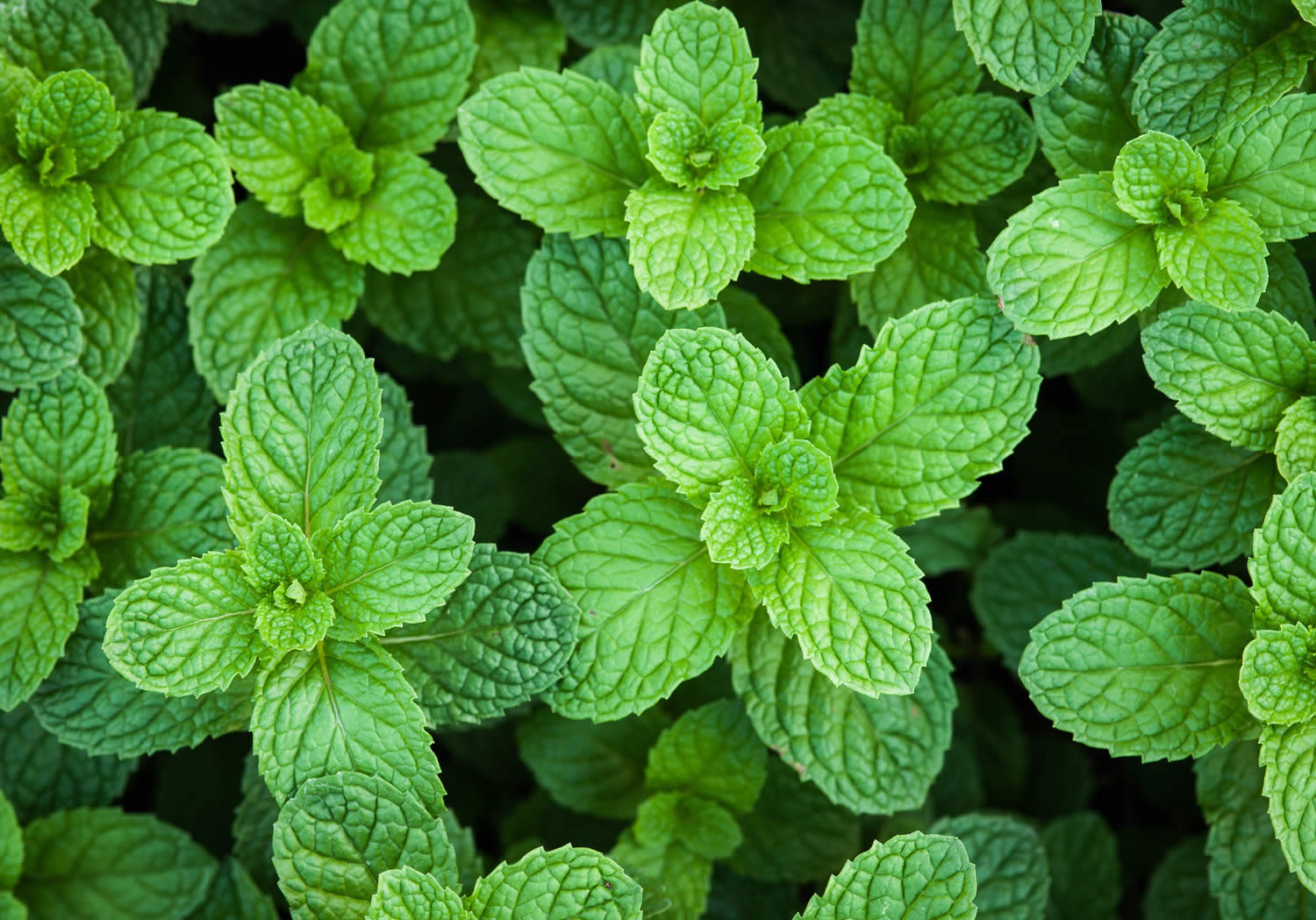 There is some evidence which show that despite spearmint beneficial effects, spearmint has some toxic and adverse effects. Severe histopathological changes in kidney, liver and uterus tissue 41) and also contact allergic reaction to the leaves of spearmint have been reported. Furthermore, daily consumption of four cups of spearmint tea can diminish libido in men 42). In one study, Akdogan 43) showed that spearmint herbal tea has adverse effects on testicular tissue and testosterone level, and alters the level of follicular stimulating hormone (FSH) and luteinizing hormone (LH) in male rats 44). Akdogan and colleagues 45) studied 21 females with hirsutism (12 with polycystic ovary syndrome and 9 with idiopathic hirsutism) drank a cup of herbal tea steeped with spearmint twice daily for 5 days during the follicular phases of their menstrual cycles. After treatment with the spearmint tea, the patients had significant decreases in free testosterone with increases in luteinizing hormone (LH), follicle-stimulating hormone (FSH) and estradiol 46). There were no significant decreases in total testosterone or DHEAS levels. This study was followed by a randomized clinical trial by Grant 47), which showed that drinking spearmint tea twice daily for 30 days (vs. chamomile tea, which was used as a control) significantly reduced plasma levels of free and total testosterone in patients with hirsutism associated with polycystic ovarian syndrome (PCOS). LH and FSH also increased. There was a significant change in patients’ self-reported dermatology-related quality of life indices, but no objective change on the Ferriman-Gallwey scale. Therefore, people who consume spearmint should be advised to use this herbal plant in a proper manner and avoid high dose (the actual spearmint dosage has not been clarified). Furthermore, because the exact constituents of spearmint which cause antifertility have not been clarified, scientists suggest that ongoing studies should be performed on different fractions of spearmint extract.