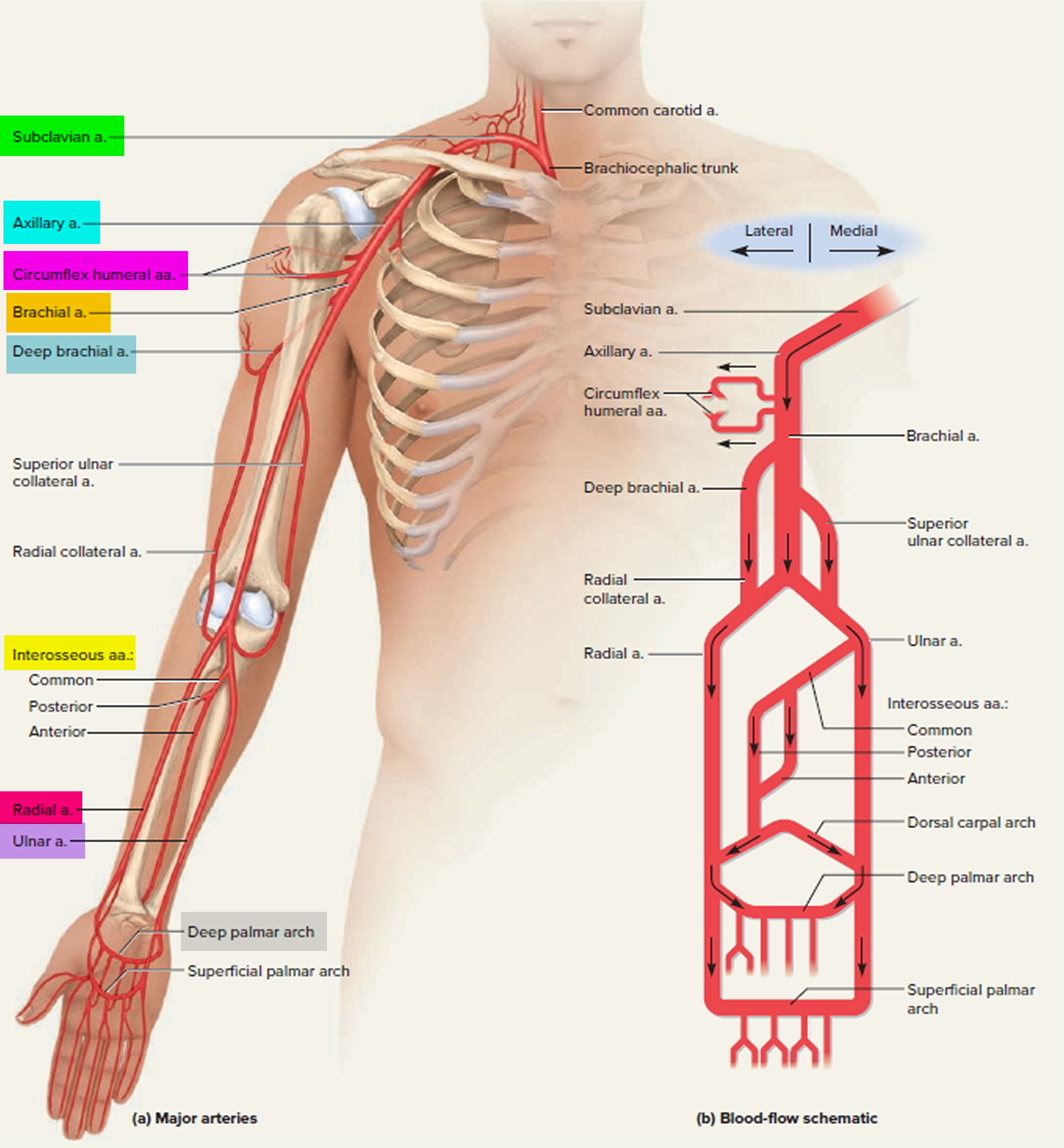 As the  subclavian artery continues past the first rib, it is named the axillary artery. It continues through the axillary region, gives off small thoracic branches and ends, again in name only, at the neck of the humerus. Here, it gives off a pair of circumflex humeral arteries, which encircle the humerus, anastomose with each other laterally, and supply blood to the shoulder joint and deltoid muscle. Beyond this loop, the vessel is called the brachial artery.

The superior ulnar collateral artery arises about midway along the brachial artery and descends in the medial side of the arm. It empties into the ulnar artery slightly distal to the elbow.

Just distal to the elbow, the brachial artery forks into the radial and ulnar arteries. The radial artery descends the forearm laterally, alongside the radius, nourishing the lateral forearm muscles. The most common place to take a pulse is at the radial artery just proximal to the thumb.

The ulnar artery descends medially through the forearm, alongside the ulna, nourishing the medial forearm muscles. 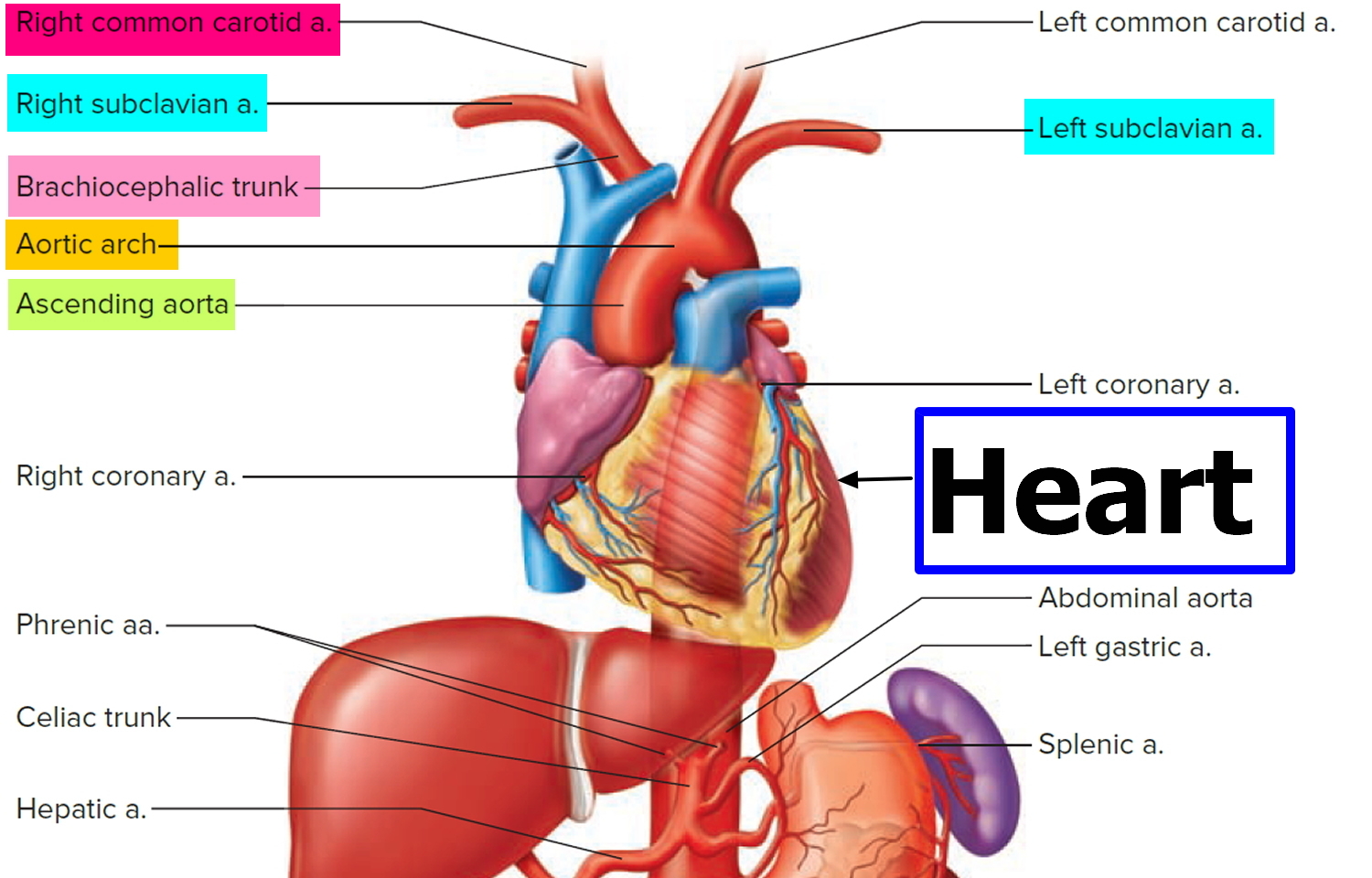 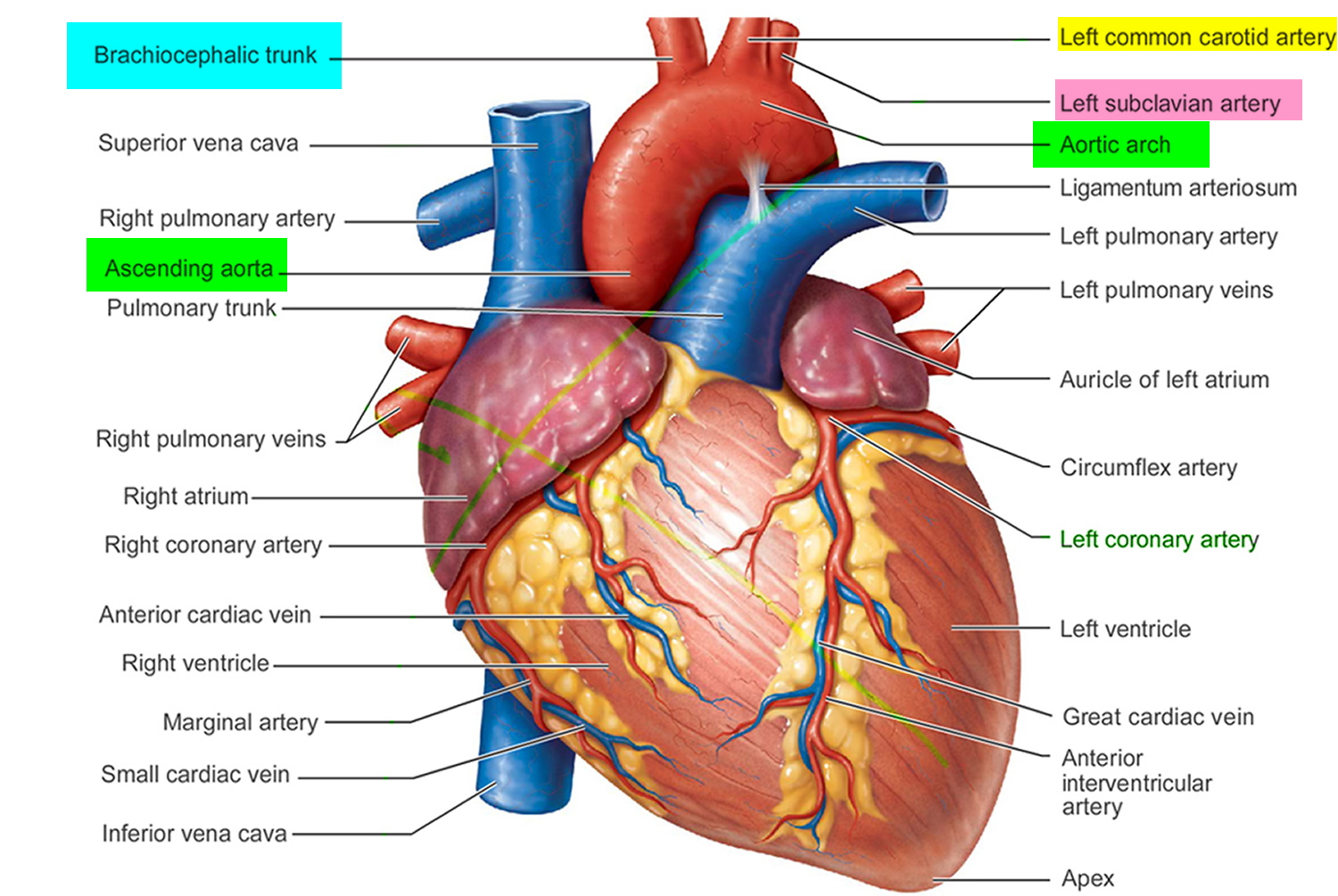 Figure 3. Branches of subclavian artery to the shoulder and upper limb

Branches of the Subclavian artery in the head and neck

All branches from the right and left subclavian arteries in the head and neck arise from the first part of the artery, except in the case of one branch (the costocervical trunk) on the right side (Figure 4). The 4 majors branches include:

Figure 4. Branches of subclavian artery in the neck and head 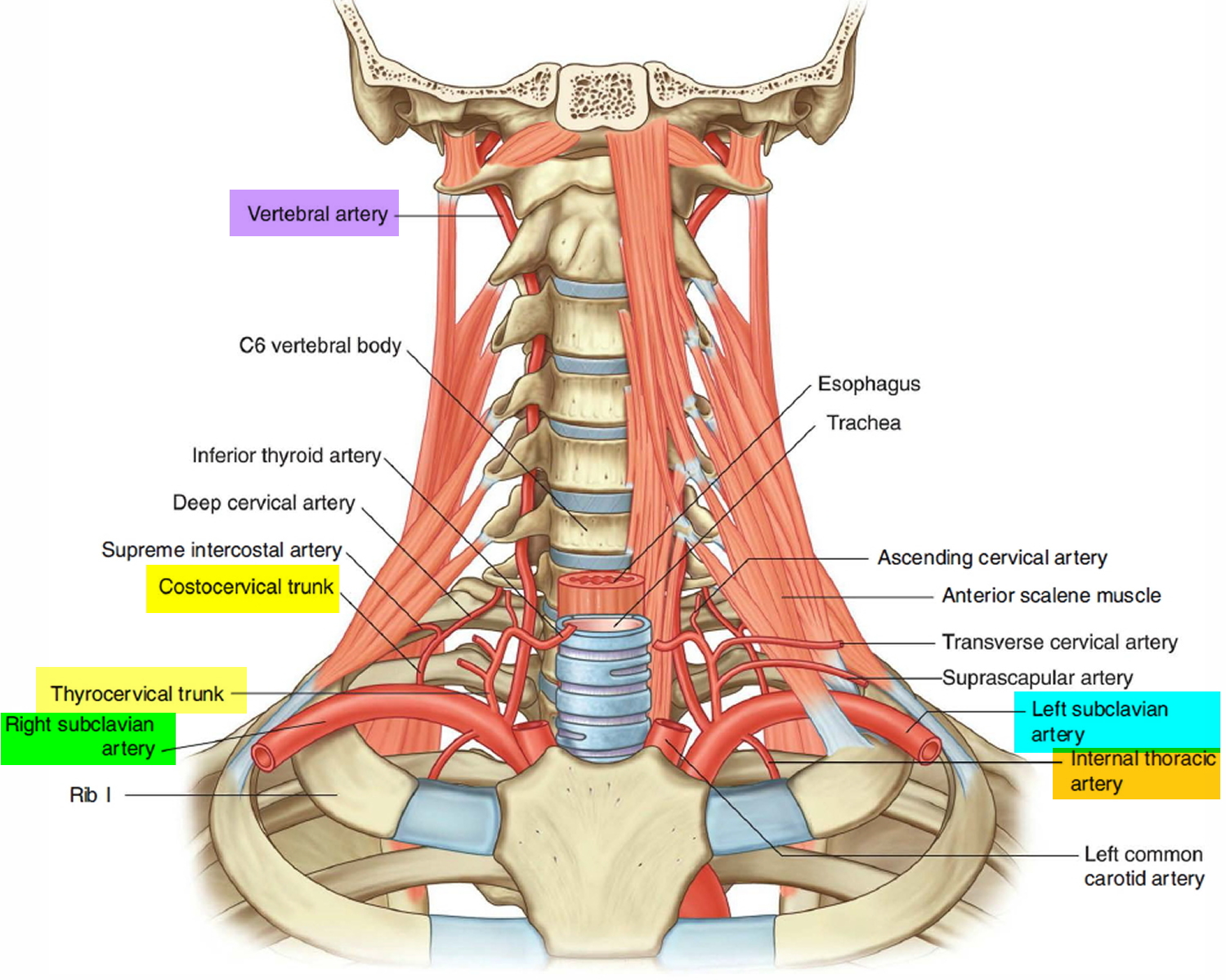 One branch joins with its companion from the other side to form the single anterior spinal artery, which then descends in the anterior median fissure of the spinal cord.

Just before the two vertebral arteries join, each gives off a posterior inferior cerebellar artery.

Figure 5. Branches of subclavian artery to the brain 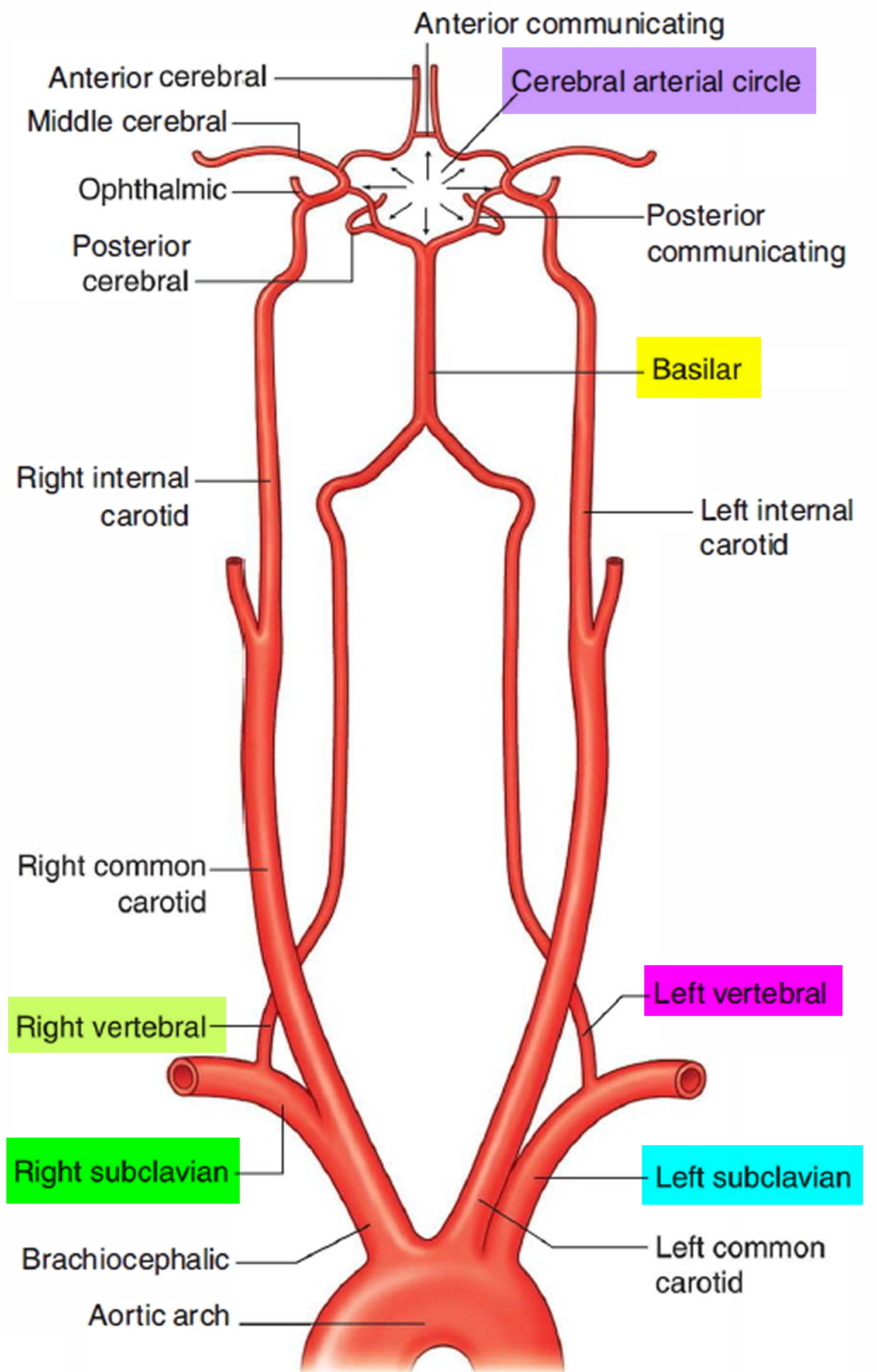 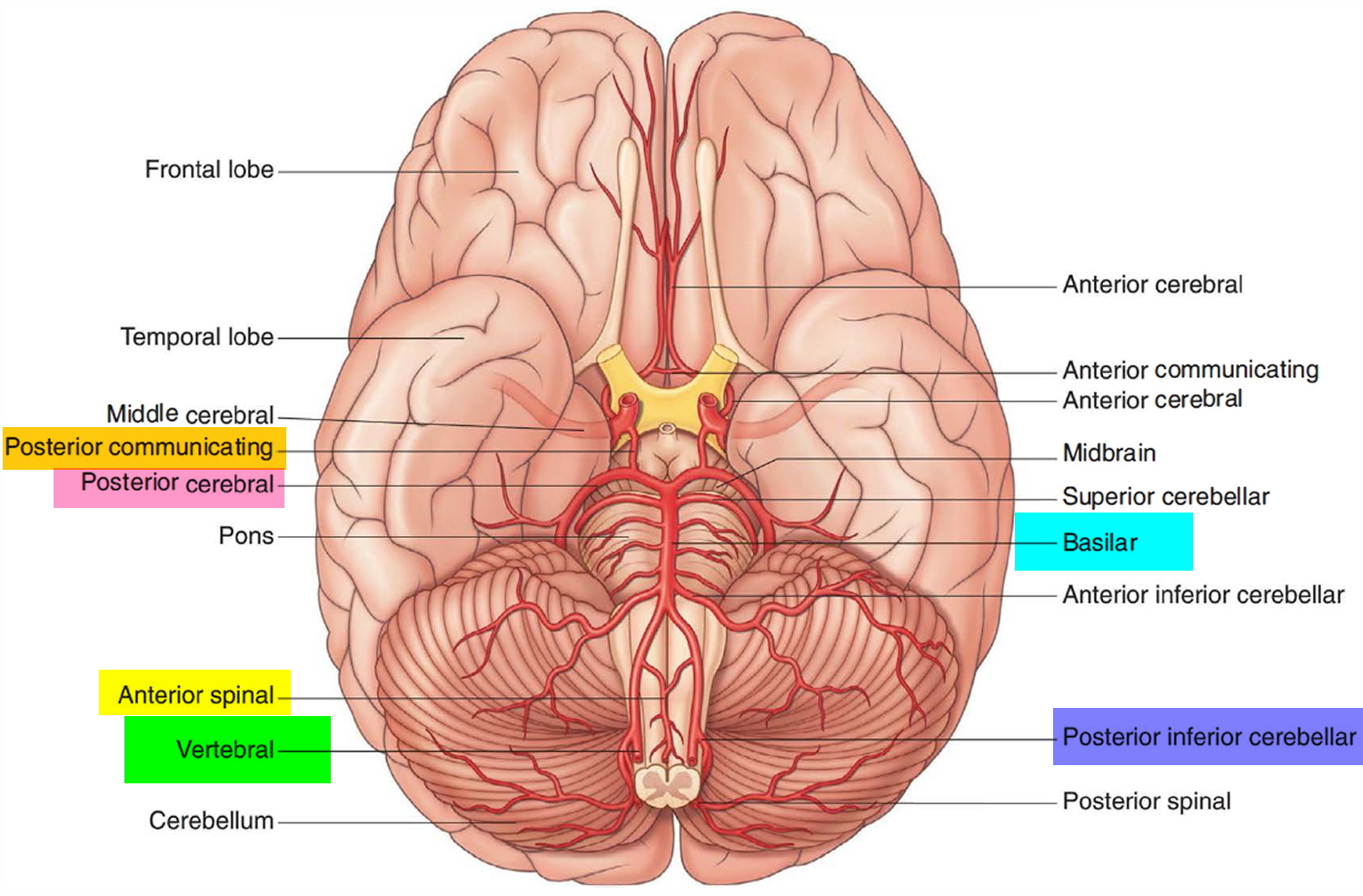 Transverse cervical artery. The middle branch of the thyrocervical trunk is the transverse cervical artery. This branch passes laterally, across the anterior surface of the anterior scalene muscle and the phrenic nerve, and enters and crosses the base of the posterior triangle of the neck. It continues to the deep surface of the trapezius muscle, where it divides into superficial and deep branches :

Suprascapular artery. The lowest branch of the thyrocervical trunk is the suprascapular artery. This branch passes laterally, crossing anterior to the anterior scalene muscle, the phrenic nerve, the third part of the subclavian artery, and the trunks of the brachial plexus. At the superior border of the scapula, it crosses  over the superior transverse scapular ligament and enters the supraspinatus fossa.

The final branch of the subclavian artery in the root o f the neck is the costocervical trunk (Figure 4). It arises in a slightly different position, depending on the side:

On both sides, the costocervical trunk ascends and passes posteriorly over the dome of the pleural cavity and continues in a posterior direction behind the anterior scalene muscle. Eventually it divides into two branches the deep cervical and the supreme intercostal arteries.

Aberrant right subclavian artery or Lusoria artery is a relatively common congenital anomaly. It has a prevalence of up to 1.8% 9). About a third of people with this anatomic variant experience symptoms. Dysphagia (difficulty swallowing) is experienced in 90% of such cases, whereas dyspnea (difficult or laboured breathing), is less common 10). Dysphagia secondary to extrinsic esophageal compression by an aberrant right subclavian artery is known as dysphagia lusoria 11). The term, Lusoria artery, dates back to the first description of the condition in 1794 by David Bayford, who called it “lusus naturae,” meaning “freak or jest of nature” 12).

The anomaly may be associated with some clinical manifestations such as dyspnea, stridor (a harsh vibrating noise when breathing), dysphagia (which is called dysphagia lusoria), chest pain or fever 16), 17), 18), but majority of cases with aberrant right subclavian artery are asymptomatic.

In the symptomatic cases, particularly in the cases with high-risk dilated aneurysm, the general census is advocating surgical treatment 19), 20), 21). In asymptomatic cases, the anomaly has low importance, and there is no need for further intervention. 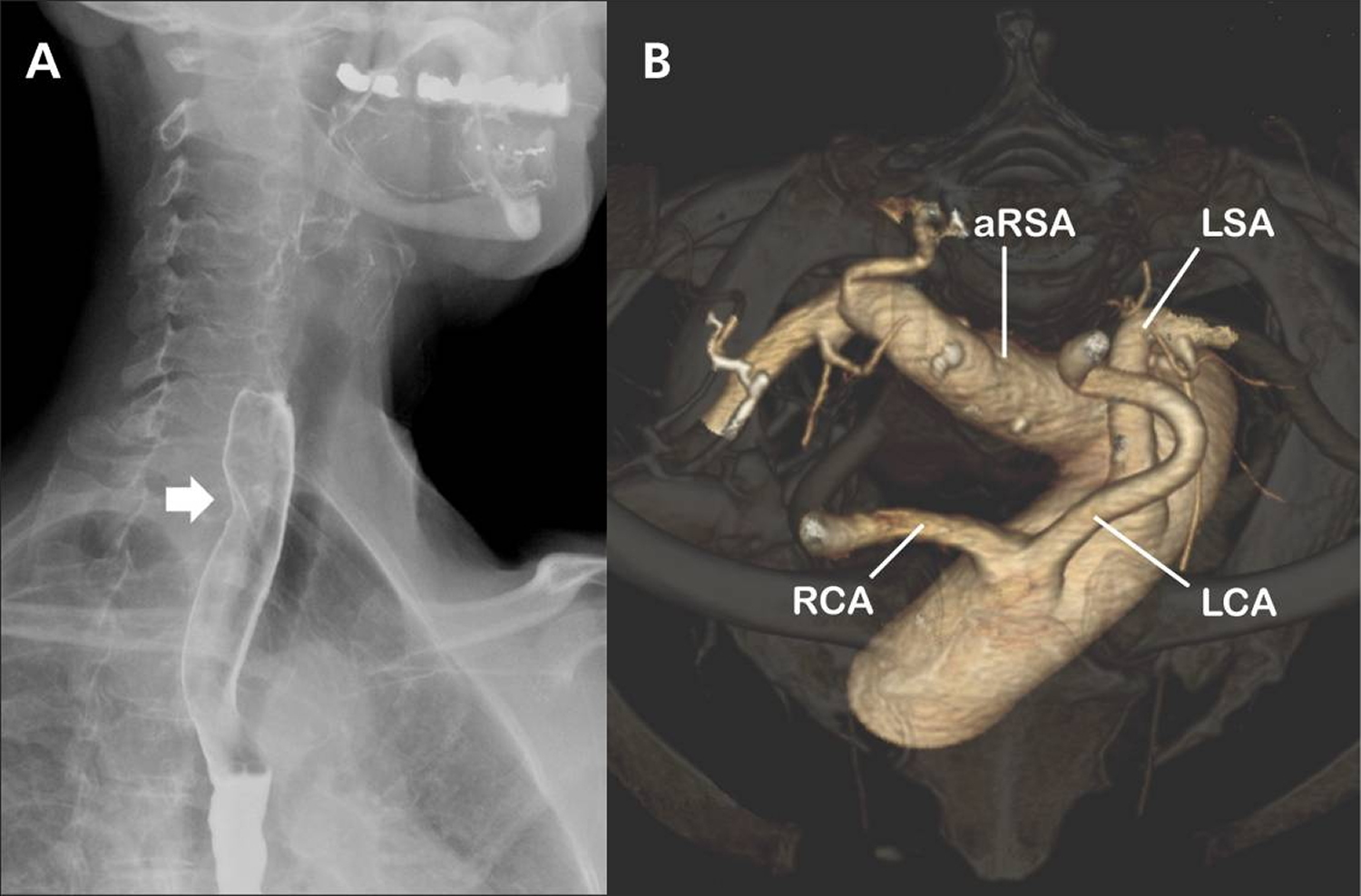 (A) A barium esophagogram (lateral projection) showing an oblique indentation of the posterior esophageal wall (arrow) that suggests extrinsic compression of the esophagus by an aberrant right subclavian artery.

Subclavian artery stenosis or occlusion has a low prevalence (1.9%) of the free-living population and is asymptomatic in most cases 23):618–623. https://www.ncbi.nlm.nih.gov/pubmed/15358030)). Additionally, subclavian artery stenosis is correlated with current and past smoking histories, systolic blood pressure (hypertension), HDL levels (low HDL “good” cholesterol levels), and the presence of peripheral artery disease. These findings suggest that bilateral brachial blood pressure measurements should routinely be performed in patients with an elevated risk profile, both to screen for subclavian artery stenosis and to avoid missing a hypertension or peripheral artery disease diagnosis because of unilateral pressure measurement in an obstructed arm.

Angioplasty and stenting are first line interventions for symptomatic subclavian occlusive disease. A retrospective study on the long-term outcome of this endovascular intervention concluded that there was high primary success with satisfactory outcomes beyond 10 years 30). Angioplasty can however, can cause intraluminal hyperplasia and the re-stenosis rates are higher than for extrathoracic surgical revascularisation 31). Extrathoracic surgical revascularisation becomes necessary when endoluminal measures fail, or when anatomical variations make it more technically difficult.

The study conducted by Stone et al. 32) compared endovascular treatment and open surgery in subclavian occlusive disease. The study concluded that endoluminal therapy for subclavian disease is effective and safe; however, open surgery still carries a better long-term durability and should be the preferred approach in low-risk patients. Symptomatic patients who failed endovascular treatment or subsequent loss of patency by stent occlusion should be considered for surgical revascularization.

Carotid-axillary bypass is less widely used than the other techniques. It has the advantage of avoiding the area of stenosis in cases where the subclavian artery has extensive disease and damage from previous angioplasty and stenting. It can be performed even with more distal disease in the subclavian artery 43).

It is important to consider the options available when considering surgical management of subclavian artery stenosis. In addition to atherosclerosis and damage from previous endovascular treatments, anatomical variations such arteria lusoria may complicate surgical decisions. 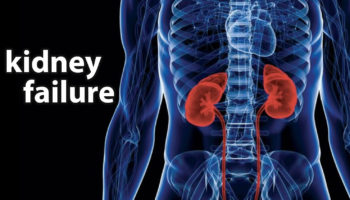 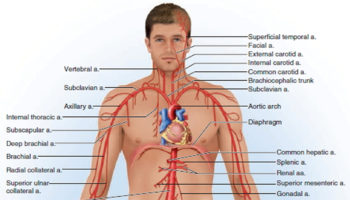 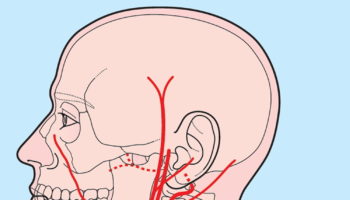 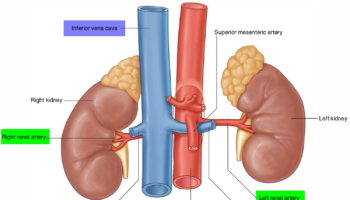 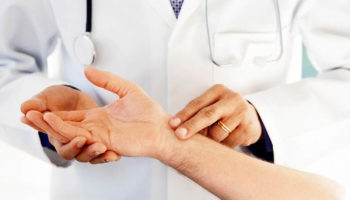