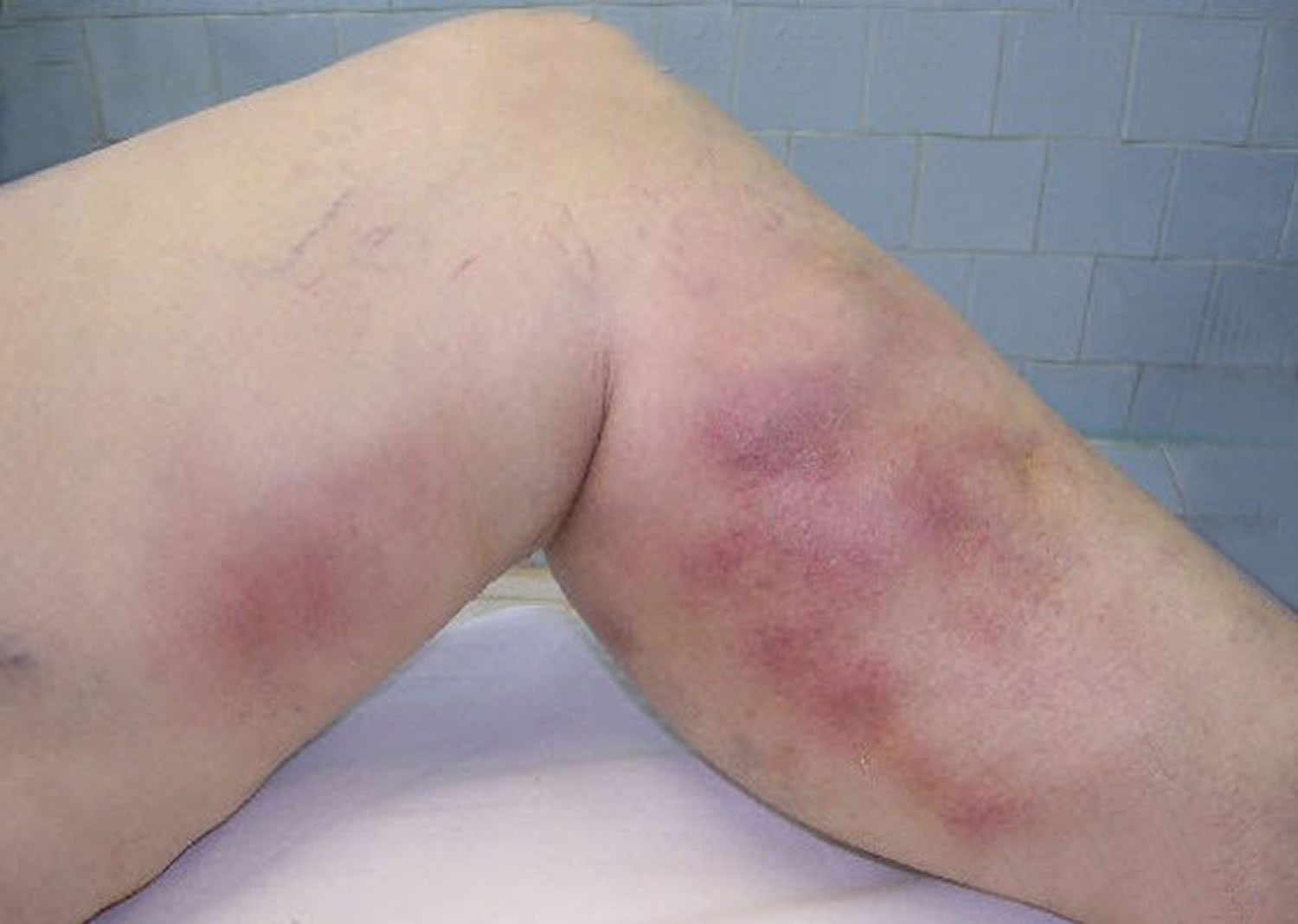 Thrombophlebitis is a general term for “inflammation of the veins.” The vein becomes inflamed because there is blood clotting inside it or the vein walls are damaged. Blood clots (i.e. thrombosis) can form and block one or more veins, usually in your legs. The affected vein might be near the surface of your skin (superficial thrombophlebitis) or deep within a muscle (deep vein thrombosis, or DVT). Thrombophlebitis causes include trauma, surgery or prolonged inactivity.

See your doctor right away if you have a red, swollen or tender vein — especially if you have one or more risk factors for thrombophlebitis.

Seek immediate medical attention if you have pain, swelling and tenderness in your leg, and you develop breathlessness and chest pain, go to an emergency room. These might indicate that you have a dislodged blood clot traveling through your veins to your lungs (pulmonary embolism).

Superficial thrombophlebitis is typically more annoying than serious. Usually, the blood clot clears and the inflammation dies down within a few weeks.

Most people with superficial thrombophlebitis are otherwise well. There shouldn’t be any foul discharge or abscess, and it’s normally just lumps under the skin rather than swelling of the whole calf.

This may be painful, but it shouldn’t prevent you walking reasonably well.

When the inflammation settles, you may be left with darkened skin and the lump may take three or four months to go. But most people make a full recovery.

This is because there’s a basic problem with the vein, and you may need this removing.

You’re more at risk of superficial thrombophlebitis if you:

Symptoms may include any of the following:

Complications are rare. Possible problems may include the following:

There’s a small chance of the blood clot traveling along the vein to where it meets a deeper vein, and a DVT developing. This is more likely if the surface clot extends into the upper thigh or groin, or behind the knee (in places where superficial veins meet deeper veins).

It’s also more likely to occur if the affected vein is a normal vein rather than a varicose vein, if you’ve had a DVT before, or if you’re immobile.

A DVT can cause pain, swelling and a heavy ache in your leg and and possible pulmonary embolism – see your doctor immediately if you experience these symptoms.

In the hospital, swollen or inflamed veins can be prevented by:

When possible, avoid keeping your legs and arms still for long periods. Move your legs often or take a stroll during long plane trips or car trips. Try to avoid sitting or lying down for long periods without getting up and moving about.

Your health care provider will diagnose this condition based mainly on the appearance of the affected area. Frequent checks of the pulse, blood pressure, temperature, skin condition, and blood flow may be needed.

Ultrasound of the blood vessels helps confirm the condition.

If there are signs of an infection, skin or blood cultures may be done.

There is no clear consensus on the optimal treatment of superficial thrombophlebitis. Although antithrombotic medications such as fondaparinux (2.5 mg/d for 45 days) may be more effective than placebo in reducing the risk of subsequent DVT 3), the evidence is generally of low grade and the costs and inconveniences of anticoagulant therapy are not inconsequential 4). Surveys suggest that physician opinions on the appropriate management of superficial thrombophlebitis vary significantly and management includes non-steroidal anti-inflammatory drugs (NSAIDs), topical therapies, or watchful waiting 5).

To reduce discomfort and swelling, your provider may recommend that you:

If you have a catheter or IV line, it will likely be removed if it is the cause of the thrombophlebitis.

Medicines called NSAIDs, such as ibuprofen, may be prescribed to reduce pain and swelling.

If clots in the deeper veins are also present, your provider may prescribe medicines to thin your blood. These medicines are called anticoagulants. Antibiotics are prescribed if you have an infection.

Surgical removal (phlebectomy), stripping, or sclerotherapy of the affected vein may be needed. These treat large varicose veins or to prevent thrombophlebitis in high-risk people.

Superfcial migratory thrombophlebitis is a commonly missed sign of malignancy (cancer) and rates of misdiagnosing it as cellulitis are estimated to be as high as 28 percent in hospital settings 7). There is a broad differential for erythematous skin, including cellulitis, but also many clinical mimickers that can be broadly described as pseudocellulitis. Outpatient diagnoses, such as lymphedematous rubor, dependent rubor, psoriasis, stasis dermatitis, stasis panniculitis, and pigmented purpuric eruptions, and superfcial migratory thrombophlebitis, are characteristic forms of pseudocellulitis 8). These cases are treated differently than cases of cellulitis. Treating pseudocellulitis with antibiotics, as is typical in the case of a cellulitis, could lead to antimicrobial resistance, hospital overuse, and a delay in proper treatment. Dermatologist expertise is often required for identification and proper treatment 9), as misdiagnosis by nondermatologist physicians is all too common 10). 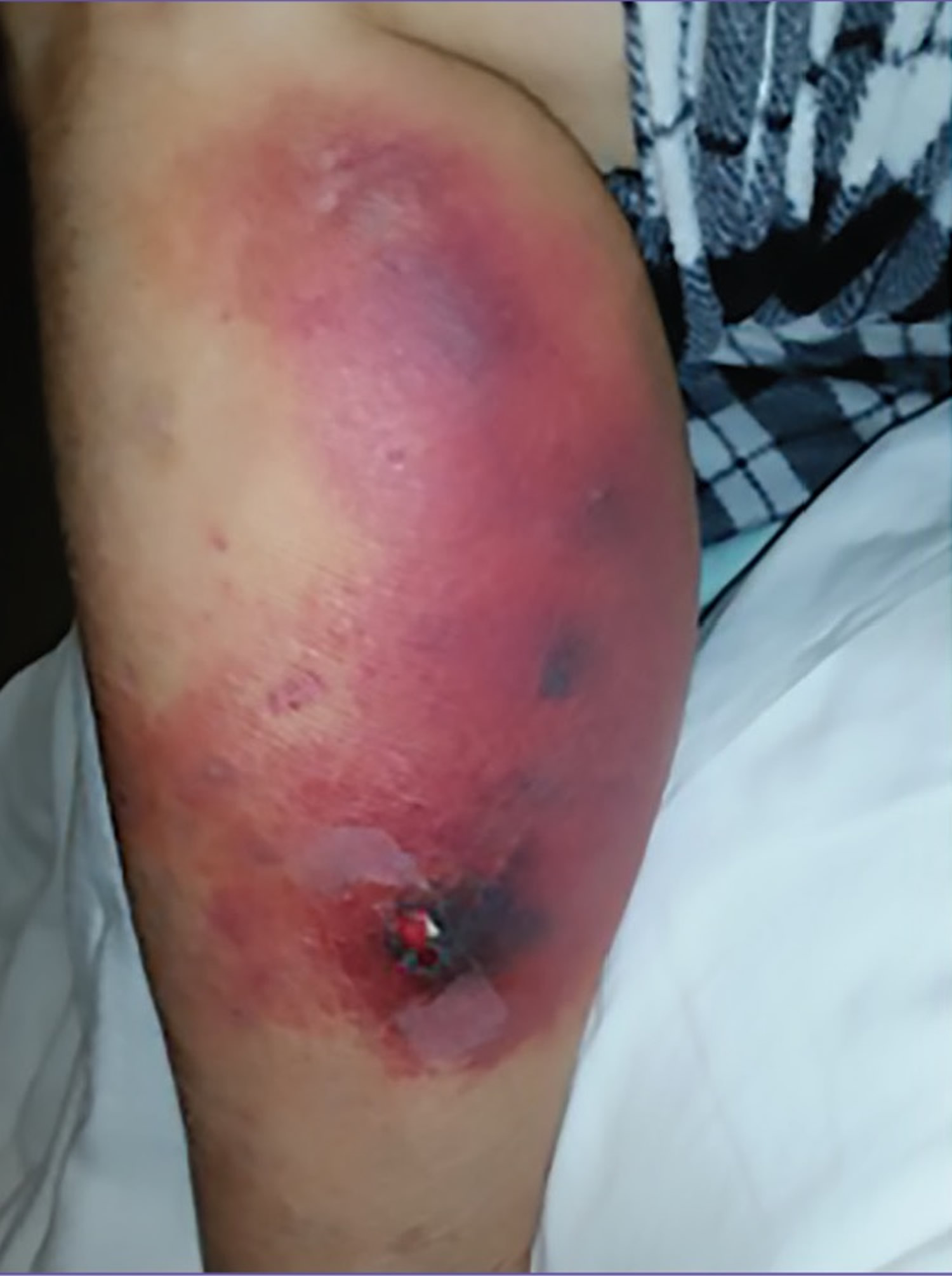 Deep vein thrombosis (DVT) is a blood clot that develops within a deep vein in the body, usually in the leg.

Blood clots that develop in a vein are also known as venous thrombosis.

DVT usually occurs in a deep leg vein, a larger vein that runs through the muscles of the calf and the thigh.

It can cause pain and swelling in the leg and may lead to complications such as pulmonary embolism. This is a serious condition that occurs when a piece of blood clot breaks off into the bloodstream and blocks one of the blood vessels in the lungs (see below).

DVT and pulmonary embolism together are known as venous thromboembolism (VTE).
Symptoms of DVT

In some cases, there may be no symptoms of DVT. If symptoms do occur they can include:

DVT usually (although not always) affects one leg. The pain may be worse when you bend your foot upward towards your knee.

Both DVT and pulmonary embolism require urgent investigation and treatment.

Anyone can develop DVT, but it becomes more common over the age of 40. As well as age, there are also a number of other risk factors, including:

The combined contraceptive pill and hormone replacement therapy (HRT) both contain the female hormone oestrogen, which causes the blood to clot more easily. If you’re taking either of these, your risk of developing DVT is slightly increased.

If you need to go into hospital for surgery, a member of your care team will assess your risk of developing a blood clot while you’re there.

If you’re at risk of developing DVT, there are a number of things you can do to prevent a blood clot occurring, both before you go into hospital, such as temporarily stopping taking the combined contraceptive pill, and while you’re in hospital, such as wearing compression stockings.

When you leave hospital, your care team may also make a number of recommendations to help prevent DVT returning or complications developing. These may include:

There’s no evidence to suggest that taking aspirin reduces your risk of developing DVT.

See your doctor before embarking on long-distance travel if you’re at risk of getting DVT, or if you’ve had DVT in the past.

When taking a long-distance journey (six hours or more) by plane, train or car, you should take steps to avoid getting DVT, such as drinking plenty of water, performing simple leg exercises and taking regular, short walking breaks.

It can be difficult to diagnose DVT from symptoms alone, so your doctor may advise that you have a specialised blood test called a D-dimer test.

This test detects pieces of blood clot that have been broken down and are loose in your bloodstream. The larger the number of fragments found, the more likely it is that you have a blood clot in your vein.

However, the D-dimer test isn’t always reliable because blood clot fragments can increase after an operation, injury or during pregnancy. Additional tests, such as an ultrasound scan, will need to be carried out to confirm DVT.

An ultrasound scan can be used to detect clots in your veins. A special type of ultrasound called a Doppler ultrasound can also be used to find out how fast the blood is flowing through a blood vessel. This helps doctors identify when blood flow is slowed or blocked, which could be caused by a blood clot.

A venogram may be used if the results of a D-dimer test and ultrasound scan can’t confirm a diagnosis of DVT.

During a venogram, a liquid called a contrast dye is injected into a vein in your foot. The dye travels up the leg and can be detected by X-ray, which will highlight a gap in the blood vessel where a clot is stopping the flow of blood.

Heparin and warfarin are two types of anticoagulant often used to treat DVT. Heparin is usually prescribed first because it works immediately to prevent further clotting. After initial treatment, you may also need to take warfarin to prevent another blood clot forming.

A number of anticoagulants, known as directly acting oral anticoagulants (DOACs), may also be used to treat conditions such as DVT. These medications include rivaroxaban and apixaban, and they’ve been shown to be as effective as heparin and warfarin with less serious side effects.

Complications from superficial thrombophlebitis are rare. However, if you develop DVT, the risk of serious complications increases. Complications might include:

The cause of thrombophlebitis is a blood clot, which can form in your blood as a result of:

Blood clots may form when something slows or changes the flow of blood in the veins.

Blood is more likely to clot in someone who has certain problems or disorders, such as:

Your risk of thrombophlebitis increases if you:

If you have one or more risk factors, discuss prevention strategies with your doctor before taking long flights or road trips or if you’re planning to have elective surgery, recovery from which will require you not to move much.

Sitting during a long flight or car ride can cause your ankles and calves to swell and increases your risk of thrombophlebitis. To help prevent a blood clot:

Superficial thrombophlebitis signs and symptoms include:

For superficial thrombophlebitis, your doctor might recommend applying heat to the painful area, elevating the affected leg, using an over-the-counter nonsteroidal anti-inflammatory drug (NSAID) and possibly wearing compression stockings. The condition usually improves on its own.

Your doctor might also recommend these treatments for both types of thrombophlebitis:

Your provider may prescribe medicines such as:

Figure 3. Support stockings or compression stockings, compress your legs, promoting circulation and wraps can help to reduce discomfort. A stocking butler may help you put on the stockings. 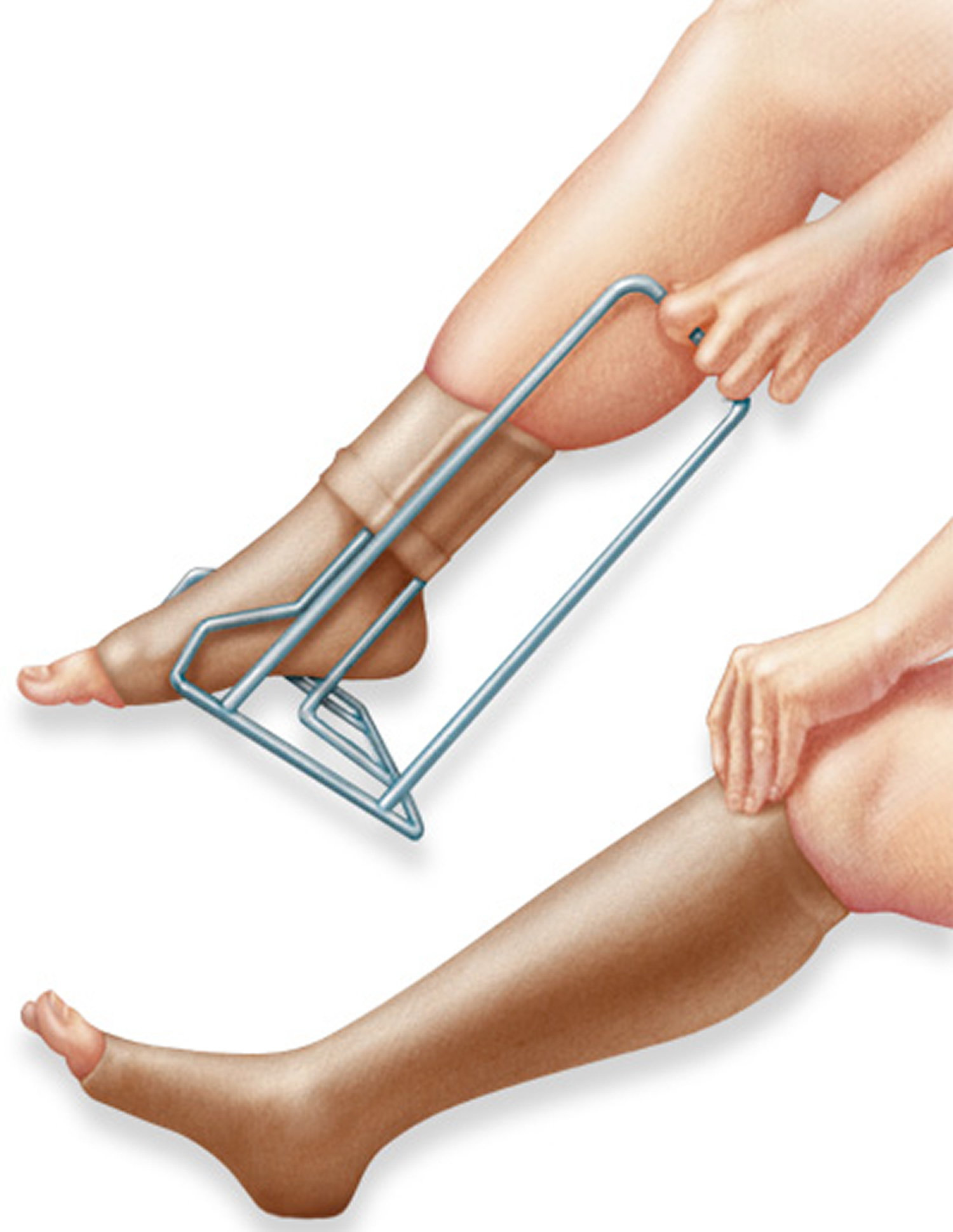 You may be told to do the following:

In addition to medical treatments, here are self-care measures to help improve thrombophlebitis.

If you have superficial thrombophlebitis:

If you have deep vein thrombosis:

Let your doctor know if you’re taking another blood thinner, such as aspirin.